The Sheepdogs Concoct a Batch of "Craft Rock and Roll"

The Sheepdogs are Ryan Gullen, Shamus Currie, Ewan Currie, Jeremy Bowskill and Sam Corbett. Photo by Mat Dunlap
On the press release announcing their seventh and most recent studio record, Outta Sight (Warner Canada), it is promised that the Sheepdogs will deliver “non-bummer rock and roll” on the disc. Zooming in by video from his home in Canada, lead dog in the pack Ewan Currie explains the band’s approach.

Record cover
“Well, it’s been a bummer of a couple of years. And when you’re trying to write songs during that time about how you feel, it would be easy to write all songs about the pandemic and the bad feelings that it brought out,” he offers.

“But people aren’t going to want to savor this time. They want to put it in the rear view and blow out of there. So instead of focusing on the negatives, we were thinking of an escapist vibe.”

The band’s members—main songwriter Currie (lead vocals, guitar), brother Shamus Currie (keyboards), Ryan Gullen (bass), Sam Corbett (drums) and Jimmy Bowskill (guitar) also say collectively that Outta Sight is the album that they were “least prepared” to record since their 2012 self-titled debut. And that non-preparation was actually…the way to prepare this time around.

“There’s a million ways to make a record. And what’s cool about this one is that we didn’t overthink things,” Currie—who also produced Outta Sight—continues. “And the rules kept changing and we’d have to cancel things, so we just said let’s get some studio time and go in there. We got two good songs in the first session, and then we just kept going.”

Currie also points out that the band proudly recorded the entire thing live with all five members in the same room at the same time and finished off with minimal overdubbing. No Zoom Brady Bunch-style sessions or sending digital music files to each other’s computers for this one.

“Not to sound crass, but fuck that! I hate all that shit! The Zoom stuff and the recording over distance stuff. We went opposite,” he offers. “We just sat in a circle with our instruments with mics. And when we felt good, we just told our engineer Tom [D’arcy] to hit ‘record.’” And that’s what good rock and roll is, both at a show onstage or in the audience or recording in the studio. It’s all about being together.”
The Canadian-bred Sheepdogs were born in 2004 in their hometown of Saskatoon, Saskatchewan. They played original music, but with clear roots in ‘70s-style blues/boogie rock and roll. Against seemingly impossible odds, they won Rolling Stone magazine’s “Choose the Cover” contest, going up against 16 similarly unsigned bands and garnering the most popular votes to grace it in 2011.

They became hugely successful in their native country. But despite putting out a stream of solid full-length studio records, EPs, and live discs, the Sheepdogs have never quite been able to really crack the code in the United States. A goal even more out of sight now as pop, hip hop, and punk lite dominate the charts. But you won’t find Currie bemoaning his commercial status. 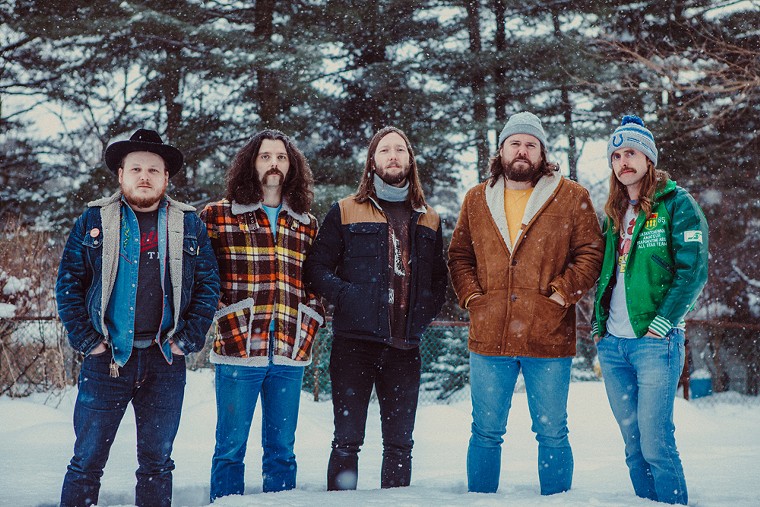 The Sheepdogs out in their Canadian element: Bowskill, Gullen, Corbett, Ewan Currie and Shamus Currie.
Photo by Mat Dunlap
“I don’t think I was ever interested in super stardom. I just wanted to be able to make a living writing and performing and recording rock music. I don’t need to win Grammys and shit like that. I haven’t had a job in over a decade where I had to punch a clock, and that’s a great time,” he offers.

“Sure, I wish more people came to the shows in America. But every time we come back, it bumps up a notch. I guess I’m a rock and roll Middle Class guy where I’m content to keep plugging away and just make the music like I want to.”

Currie says that he sometimes “can’t believe” in 2022 he’s making a living as a working musician writing, recording and performing. “I look at us as kind of artisans who make small batch bourbons or something like that,” he says. “We’re making craft rock and roll. And personally, I hate craft beer!”
The last time the Sheepdogs came to Houston was in 2018 at The Continental Club supporting their last studio record, the more psychedelic-tinged Changing Colours. They’ll be back on October 28 upstairs at the White Oak Music Hall. And like last time, they’ll be bringing along merch that’s not available in the U.S. and stretching out their set even more.

“People try to get our merch online, but it’s so much cheaper just to get it at the show! You don’t have to pay for shipping and customs!” Currie laughs. “And our set times have been creeping up to [nearly] two hours. But we’re not quite in that Bruce Springsteen territory yet!”

Back to Outta Sight, it’s the band’s most Southern Rock-sounding effort to date, with chugging tracks that could be lost tunes from Lynyrd Skynyrd (“Find the Truth,” “Scarborough Street Fight,” “Goddamn Money”), the Atlanta Rhythm Section (“Waiting for Your Call,” “Carrying On,” “So Far Gone”), and even the Outlaws (“Roughrider ‘89”).

Ewan Currie and brother Shamus Currie in the studio recording "Outta Sight."
Photo by Vanessa Heins
“We’ve always dug Southern-style rock. I have weird time with that genre because it’s very hit and miss. And a lot of the good Southern Rock bands are from Northern California or even Canada. I really like the Ozark Mountain Daredevils,” Currie says. Shamus Currie wrote the more introspective “Mama Was a Gardener.”

“Maybe it’s a love of rock that has a foot in country a little bit. We love the Flying Burrito Brothers and old George Jones and Waylon Jennings,” Ewan Currie says. “But we also like grooves, and the South is all about that. We just got back from Europe two days ago. They love Southern Rock there. But they can’t do it!”

But there’s also their usual share of quirky tunes with an almost ‘70s dance vibe like “I Wanna Know You.” It’s accompanied by a video that once again showcases the band’s humor and self-deprecation, much like ‘90s and ‘00s videos from the Foo Fighters and Weezer.
“That’s important. Growing up in the ‘90s, rock and roll got really serious. And every front man had to be on the verge of committing suicide. Then in the 2000s, everybody was Emo and had black hair in their faces,” Currie says. “We like having fun! The Beatles are our favorite band, and they were always joking around. And I do love those Foo Fighter videos! It’s music, it’s rock and roll, and it should be fun.”

Currie says that the setlist for the upcoming Canada and North American tour will feature a mix of new material from Outta Sight and the No Simple Thing EP they put out last year, along with “old favorites” their fans sing along with word for word. But whatever they play, he says the band is just happy to be on the road again, for real, and being able to reignite the fire for their primary source of income.

“It’s a step back in the right direction. I’ve been in this band since I was 19, and we got big-ish for a while. But we learned how to run a business. Even early on we got a line of credit and learned how to pay it down. So, when we actually started to make money, we were conservative in how to pay it out,” he says.

“We wanted to have a couple of years [financial cushion] if the band went away. But we’re back at it now!” Currie laughs. “We need to get that road money!”

For more on the Sheepdogs, visit TheSheepdogs.com
KEEP THE HOUSTON PRESS FREE... Since we started the Houston Press, it has been defined as the free, independent voice of Houston, and we'd like to keep it that way. With local media under siege, it's more important than ever for us to rally support behind funding our local journalism. You can help by participating in our "I Support" program, allowing us to keep offering readers access to our incisive coverage of local news, food and culture with no paywalls.
Make a one-time donation today for as little as $1.