Pear Duo are Together in Music and Life Partners in life and music: Julie Ragins and Curtis Brengle of Pear Duo. Photo by Jim Coniglio
Curtis Brengle and Julie Ragins don’t look like hardcore criminals. In fact, the pair – partners in both their musical and personal lives – more resemble a very hip aunt and uncle than people who would encourage committing an act that’s a crime in 47 of 50 states. Yet the clueless narrator of “The Texting Song” seems to be doing just that.

“I started texting and I forgot that I was steering/I jumped the curb before I noticed I was veering/But I’m due to tweet and I got something to say/So if you’re crossing the street you best get outa the way/No need to stand there looking so perplexed/I just gotta send a text!” 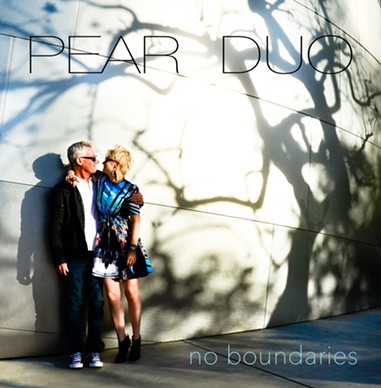 Record cover
Ragins spits out the lyrics by Dave Tull like a hot jazz tune from a lost era with a speed that might challenge Eminem. But it’s really a tongue in cheek effort from the duo who perform under the name of Pear Duo off their new record No Boundaries. Ragins handles the rich vocals and guitar while Brengle deftly plays piano.

While “The Texting Song” is something of a novelty tune, the rest of the material skips across several genres from jazz and yearning balladry to Americana and uptempo R&B and pop.

“We’ve had a wide and varied batch of things we’ve had to do musically, and I thought this would be a good chance to reflect who we are. The challenge for me was making the sounds of bass and drums and play rhythm just on my piano,” Brengle says. “So we chose varied music…because we’ve lived varied lives!” After residing in L.A. for decades though, the pair recently checked out and relocated to Wimberley, Texas.

Another song on the record plumbs a lot deeper substance than texting. Written by Ragins, “Soul Refill” was inspired by the toll that living and trying to work in the cutthroat musical milieu of L.A. for all those years took – and the place that made it better.

“It was very intense and there was a lot of grind in L.A., and you just needed to take a breath. That’s when I’d go to Joshua Tree National Park. That’s what the song is about, going out there and just trying to get back to nature and refuel,” Ragins says. “I think it’s a universal truth for people who live in cities. You want to just get out and be in nature.”

Other tracks which are a mixture of Pear Duo originals and songs written by friends include the torchy romantic paeans “Where Do We Go From Here” and “You Must Believe in Spring,” nostalgic “7 Fairway Drive,” an uptempo “Radio,” and caustic “Twenty Bucks.” “Six Eight Tune” is a piano Brengle piano instrumental, and Ragins climbs Mount Aretha to cover her hit “Baby I Love You.”

“She influenced me so much, and I wore out her cassettes playing them over and over. I have so much respect for her, that I felt that I could take one of her songs and make it my own,” Ragins says. “She’s a badass!”


Between them, Ragins and Brengle have amassed a lengthy list of experience performing on stage or recording in the studio with a wide array of artists. They include Sheena Easton, the Moody Blues, Chaka Kahn, the Pointer Sisters, Sergio Mendes, and Engelbert Humperdinck. Brengle even played acoustic piano with Ray Charles onstage while the legendary soul man took on the Fender Rhodes on tours in his big band.

In a live situation, Pear Duo know they could probably get more gigs going the all-cover tunes route, but feel they have more to offer. “It’s a completely different kind of satisfaction doing your own [material]. Crossing over to the artist side feeds this different part of your creativity,” Ragins says.

Many of the live venues Pear Duo have performed at have been for intimate audiences – very intimate. In one recent year, they took their VW Sedan and drove around the country to play 34 privately-booked house concerts, initially building on contacts Ragins was able to put together while on the Moody Blues tour.

In their official bio, Pear Duo say that their music is “unapologetically middle aged,” and both Ragins and Brengle are on the north side of 50. When asked to elaborate, they are appropriately unapologetic. 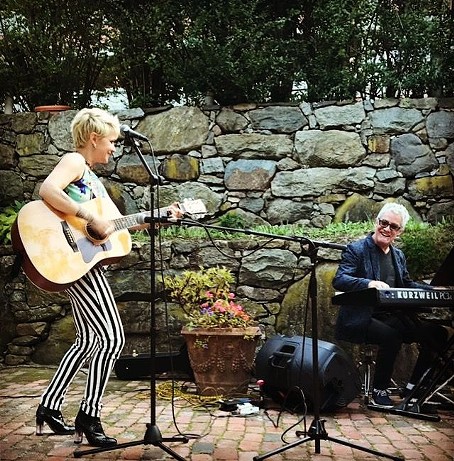 Pear Duo perform live
Photo by Lauren Greenberger
“Bluntly, after being in Los Angeles for so many years, it’s a young person’s city. And it’s easy to get brainwashed where youth sells and everything is youth driven,” Ragins says.

She notes that the closest she came to getting her own record deal was with Arista 20 years ago. But she recalls being told they would have love to sign her – if only she was younger. Ragin was 33 years old at the time.

“We’ve seen a lot of our friends age out in Los Angeles and get frustrated and angry. But I’m singing better than I have in my whole life and Curtis plays beautifully. Why do I have to apologize for the fact that I’m over 50?” she continues. “I want to play for people who are interested in what we have to offer now.”

Finally, while they are certainly in sync musically, and as a couple, they aren’t so much when it comes to the specifics of just how and when they first met.

“Well...there’s two versions,” Ragins laughs. “The first is I was doing a show in L.A. and needed a keyboard player. Curtis came highly recommended. I called him up and left him the message that every musician hates to get. Which is ‘Hi, you don’t know me. I’m a chick singer and I have a $50 gig at the Baked Potato in a couple of weeks and I need to do a rehearsal and I have no money for that. But I can give you a pizza. Oh, and you’ll have to learn about ten songs. Are you interested?'”

According to Brengle, though, he first met Ragins nearly a year earlier at a club jam session he was playing at which she attended with her father and brother. “I was standing by the door with a friend and Julie walked in. My friend knew her and introduced us briefly,” he recalls. “I was single at the time, and I thought ‘I wonder if I could marry that girl?’ She doesn’t remember it, though!”

However, when pressed, Ragins' stance on the logistics seems to have softened. “I know he’s right!” she laughs.

For more on Pear Duo and to listen to tracks from No Boundaries, visit PearDuo.com
KEEP THE HOUSTON PRESS FREE... Since we started the Houston Press, it has been defined as the free, independent voice of Houston, and we'd like to keep it that way. With local media under siege, it's more important than ever for us to rally support behind funding our local journalism. You can help by participating in our "I Support" program, allowing us to keep offering readers access to our incisive coverage of local news, food and culture with no paywalls.
Make a one-time donation today for as little as $1.