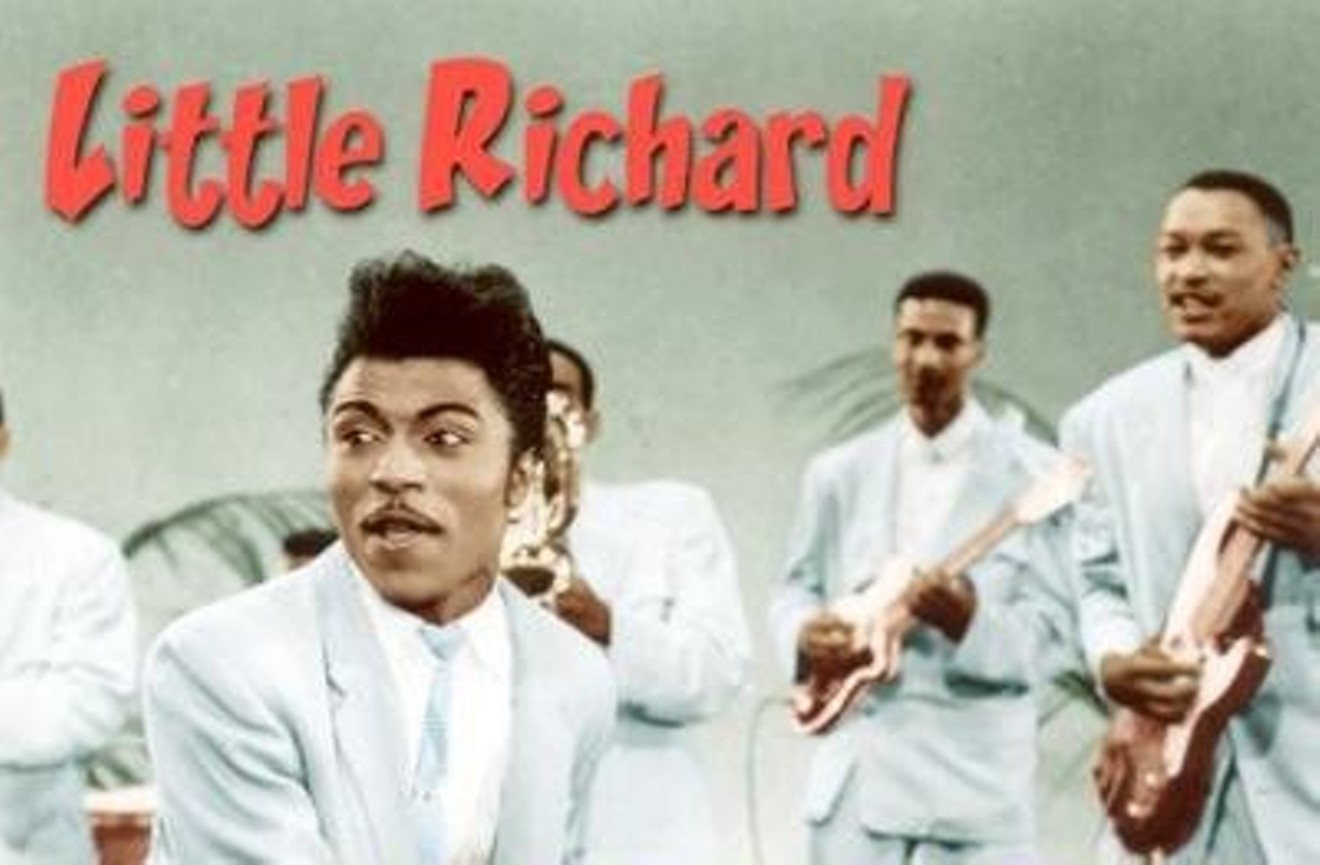 Little Richard was the most famous alumni of the Specialty Records roster. Detail from record cover
While in his late twenties, Pittsburgh-area native Art Rupe decided he very much wanted to start a career in the entertainment industry—and ideally in the world of film. But he also had a lifelong love and deep passion for music, in particular gospel and R&B. So in 1945, he founded Specialty Records.

Specialty was only active for about 15 years, but became a storied label in the early days of rock and R&B. It most famously introduced the world to the dynamo known as Little Richard. To celebrate the label’s 75th anniversary, Craft Recordings will on August 6 release Rip It Up: The Best of Specialty Records. Amazingly, Rock and Roll Hall of Famer Art Rupe himself will hold a copy in his own hands—he’s still alive at the age of 103! Craft Recordings record cover
“I tell you, he’s sharper today than you and me put together!” says music historian and author Billy Vera. He literally wrote the book on the label in 2019’s Rip It Up: The Specialty Records Story as well as the liner notes for this compilation.

“He’s a brilliant man with a Mensa-level brain, and he’s still got all his faculties. He’s lost a bit of the spring in his step, but save for a couple of things, not one iota of his memory. I really hope that this record introduces the label and artists to a younger generation.”

Vera adds that Rupe’s love of Black music started when he was a child in McKeesport, Pennsylvania, near Pittsburgh. “On Sundays, he’s go sit on a curb in front of Black church and just listen to the gospel music. And he said it moved him so much. He definitely had a real feel for the music.”

In fact, Vera points out that as both the drummer and singer, Roy Milton’s vocal mike on 1946’s “R.M. Blues” picked up leakage from his snare drum. It accidentally emphasized the back beat, which would become a core sound of rock and roll.

Billy Vera is a one-man encyclopedia about Specialty Records.
Photo by Richard Roundtree/Courtesy of Billy Vera
But it was Macon, Georgia’s Richard Penniman whose face and music will always be the most associated with Specialty. As Little Richard, he scored timeless hit after hit and laid the foundation of rock and roll (though he would forever refer to himself as “The Originator” of the genre—probably to the chagrin of artists like Chuck Berry, Jerry Lee Lewis, Bo Diddley and Fats Domino). He left the label when he famously had a religious conversion and at least temporarily abandoned rock and roll for gospel.

“He’s definitely one of the cornerstones of rock and roll for sure. Art Rupe told me recently that Roy Milton actually sold far more records than Richard. Roy had 19 Top 10 records on the R&B chart!” Vera laughs. “Besides, Richard left Specialty after only 18 months into a three-year contract. If he didn’t, he might have had an even bigger legacy.”

Also a key contributor to the Little Richard sound was songwriter/arranger/producer Bumps Blackwell, though Vera says he was “a complicated character.”

“Art generally did most of the production. But he had started a booking agency and then the publishing company. Elvis alone recorded five of its songs, and so did Pat Boone, Buddy Holly, the Everly Brothers and Bill Haley. And that took up a lot of his time,” Vera explains.

“He needed some help with A&R work. Bumps handed in a resume that turned out to be a bit false. He could handle a session, but he did a few things that Art, when he found out about it, wasn’t too pleased with. Art was a pretty ethical guy, a rarity in the business.”

Vera relates the story of songwriter John Marascalco, whose name is on several hits by Little Richard (“Ready Teddy,” “Good Golly Miss Molly” and even “Rip It Up”). Marascalco came to Rupe complaining that Blackwell would routinely change “one word” in his song, and then add himself the songwriting credit.

Vera says that Rupe was “flabbergasted” and shortly after that let Blackwell go. Others though, have not been so praising of the Specialty honcho when it comes to the areas of publishing contracts and sales royalties, including Little Richard.


There are also gems on Rip It Up from lesser-known acts like Jesse & Marvin (“Dream Girl”), and the elegant Joe Liggins and the Honeydrippers (“Pink Champagne”), along with his brother Jimmy Liggins and His Drops of Joy (“Drunk”). Vera says that the Liggins boys were quite the study in contrasts.

“They were so different from each other both artistically and personality wise. Joe was a college grad and more sophisticated musical and a fine songwriter,” Vera says. “Whereas Jimmy was more rough around the edges. He’d been a boxer! But his music is the earliest example I’ve found of that rock and roll wildness and sound, even before Louis Jordan.”

Finally, if you’re a Gen Xer, the name Billy Vera might strike a chord in your memory. That’s because he had a No. 1 hit in early 1987 with the ballad “At This Moment.” That song itself has something of a strange ride to the top.

Originally recorded live in concert and released by Billy Vera and the Beaters in 1981, it went nowhere. That was, until five years later, when it was featured significantly on several episodes of the hit TV series Family Ties as the love theme for the characters played by Michael J. Fox and Tracy Pollan. Due to all the interest, “At This Moment” was re-released on Rhino Records and not only hit the peak of the Top 40, but also made inroads in the Adult Contemporary, R&B and Country charts.


And there must have been some powerful mojo on that song—the actors soon became a real-life couple, married in 1988, and remain so to this day. Vera performed it at the 2011 TV Land Awards with the couple and other cast members in attendance.

Cover versions, royalties, and sync rights have filled Vera’s coffers as the sole songwriter of “At This Moment.” Unfortunately, a truly terrible version sung and recorded on cassette by this writer in the late ‘80s at Media Magic in Humble’s Deerbrook Mall (and inspired by a high school breakup with current Houston Press food writer/wife Lorretta Ruggiero) was not nearly as much of a hit.

So that begs the question: How often do men of a certain age approach Vera after learning his identity with their own “At This Moment” tale of woe or triumph?

“Oh yeah, I got a lot of that!” Vera—who still occasionally performs with the Beaters and recently wrote the memoir From Harlem to Hollywood—laughs. “I got lucky with that one. Michael Bublé's album that it was on sold about ten and a half million copies! But I hope it worked out better for you than it did for me girl wise!”
KEEP THE HOUSTON PRESS FREE... Since we started the Houston Press, it has been defined as the free, independent voice of Houston, and we'd like to keep it that way. With local media under siege, it's more important than ever for us to rally support behind funding our local journalism. You can help by participating in our "I Support" program, allowing us to keep offering readers access to our incisive coverage of local news, food and culture with no paywalls.
Make a one-time donation today for as little as $1.