The Catholic Girls Pray for a Resurrection with New Anthology

The Catholic Girls, 1982: Roxy Andersen, Gail Petersen, Doreen Holmes, and Joanne Holland. Photo by Stewart Turner/Provided by Chipster PR
For any musician or band, a slot at the musical guest on Saturday Night Live is a highly coveted gig. It offers national exposure to millions, and always results in a bump in recognition and record sales. That was true when the show debuted in 1975, and remains steadfast in 2020.

But in 1983, it would be an opportunity given—then snatched away—from the Catholic Girls. The all-female punk/new wave/rock quartet had released their self-titled debut on major label MCA a year earlier, and single “Boys Can Cry” was gaining traction. But as singer/guitarist/songwriter Gail Petersen puts it, the “edgy” TV show simply caved in to a threat that hadn’t even been made. MCA Records Cover
“We were booked to play, and then it was taken away. They said they didn’t want to deal with the [backlash] from the Catholic church, and I thought ‘What? Isn’t this Saturday Night Live?’ I couldn’t understand it,” she says today. “And years after that, Sinead O’Connor came in and ripped up the Pope’s picture. We were just wearing the school uniforms we grew up in, and our music wasn’t [anti-Catholic]. They really should make it up to us at this point!”

The music and story of The Catholic Girls – still active today – gets a major boost with Rock N’ Roll School for Girls (JSP). The 2CD anthology features 41 tracks recorded from 1979-2017 including the entire debut album, selections from later works, demos, alternate takes, and live tracks.

The genesis of the release came in when superfan Vincent Mazella and audio engineer John Haley attended a 2016 show, met Petersen, and were determined to make the project happen. As much of the material was recorded on decades-old standard cassette tapes, Haley’s work was cut out for him. But he was ultimately successful in cleaning everything up for release.

“I thought the worst thing that could happen with a cassette tape was that it broke,” Petersen says. “I didn’t know that age could changes pitches from instruments and vocals, and cause sound [degradation].”

The Genesis of the Catholic Girls started in actual Catholic school. That’s where Petersen saw a sign put up by fellow student Roxy Andersen about starting an all-girl band. Petersen had been thinking about the same thing, since playing with guys wasn’t really working out.

And she was inspired by the success of the Runaways. The pair bonded over the music of Split Enz, the Clash, Roxy Music, Peter Gabriel, and Elvis Costello. And from the start Petersen was serious about her songwriting. The original group (all actual Catholic school girls) also included Joanne Holland (bass) and Marilyn O’Connor (drums), the latter replaced by Doreen Holmes.


At first, the band dressed in spandex, but it “wasn’t really them.” Then they hit on something close to home: Why not wear what they were used to if they wanted to stand out? It’s hard to imagine with the lens of 2020, but the combination of the band’s name and looked began to spark controversy. Remember this was at a time when Catholic churches were putting out official statements lambasting Billy Joel’s “Only the Good Die Young.”

“I honestly didn’t expect it to be that controversial,” Petersen says. “I went through 12 years of Catholic school. We weren’t trying for controversy, and we didn’t expect to fight about it. We weren’t being nasty about the church, it’s was who we were. We weren’t like the Go-Go’s saying we hated our parents, because we didn’t. But we had to have our own uniforms made by then!”

On that 1982 debut LP (with a striking cover of the band on a school bus amidst real high school boys looking alternately excited and threatened) are songs like “Private School,” “Someone New,” “C’est Impossible,” “Where Did I Go Wrong,” and the aforementioned “Boys Can Cry.”

But it closes with the band’s epic, “God Made You for Me.” The 9+ minute track stands apart for its lyrics, sound, instrumental break, and even orchestration. This was their “Stairway to Heaven,” “Freebird,” or “Funeral for a Friend.” But it drew the ire of the Catholic archdiocese of Rhode Island which “banned” the song and the group.

“They misinterpreted the lyrics! It was saying ‘God made you for me, so how could [another girl] take you away?’ They decided I was saying that God was a girl and banned it!” Petersen says.

“That was an epic song. We wanted to be just like the guy bands doing things like that. We wanted a song with levels of meaning and orchestration and we carefully planned it all out. Songs that people would remember and relate to and had a heart with lyrics that meant something. You can have music where people are happy and dancing and ‘got the beat,’ that’s okay. But we had more than that. We had soul and it wasn’t just fluff.”


A mention of the phrase “got the beat” reflects Petersen’s feelings about their MCA label mates at the time and similar all-female band, the Go-Go’s—or at least how she believes they were each treated and viewed by MCA. Petersen says that if her group had been able to tour and release albums overseas and had the company support that the Go-Go’s did, their career would have had “a much different history.”

“It was great to be signed to MCA, but in the middle of it, Irving Azoff took over, and all the people that had signed us one by one were fired, so we lost all the tour support,” she says. “And of course, he was also the Go-Go’s manager. And he had a whole idea when he took over there should only be one girl band and it was going to be his girl band. Apparently, here seemed no room for two. And a lot of stuff was taken from us.”

She says the band even had to self-finance their own video, which got some plays on MTV. But Petersen says MCA wouldn’t commit to more money to increase their profile on the channel or the road.

The Catholic Girls opened for a wide variety of bands including the Clash, Judas Priest, R.E.M, the Ramones, and Tom Petty. But she has her picks for best and worse experiences in that area.

“We opened for the Kinks on New Year’s Eve and in the dressing room later, Ray Davies came in and said we had played a really good set. He was a real gentlemen,” she recalls. “But, Tommy Tutone was not that nice. They would pull the plug when we got an encore. The whole band was like that. They were like ‘OK, we’re this many guys and you’re this many girls and we’ll all hook up. And I was like ‘No, we’re not that kind of band.’” 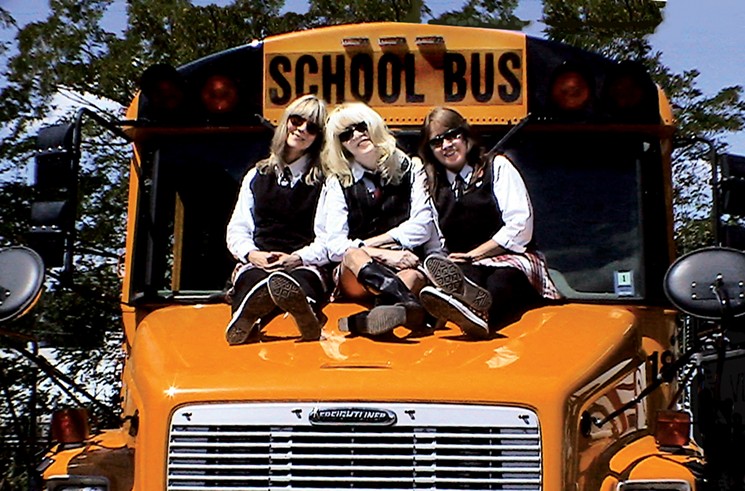 The Catholic Girls today - still riding the bus: Roxy Andersen, Gail Petersen, Doreen Holmes.
Photo by Steve Berger/Provided by Chipster PR
If anything, despite the assumed sexual fantasies of some of their audience, the Catholic Girls were known as a band that didn’t do drugs and didn’t mess around. “We all had boyfriends at home and that was that. For me, it was a job. You went out and put on a good show. That’s what we were concerned about, the audience. Not having a party.” Petersen says. She add that they were more concerned with finding some food at the venue after spending hours in a “cruddy van” criss-crossing the country.

The Catholic Girls eventually disbanded, but Petersen continued to write songs and manuscripts as a horror/thriller novelist (her The Making of a Monster came out in 1993). The band reassembled in 1999 and began putting out new music and playing live.

The current lineup includes original members Petersen and Andersen, Holmes (who shares duties with touring drummer Kyd Ellsworth), and sometimes even a Catholic “guy,” bassist Steve Berger. Newer songs on Rock N’ Roll School for Girls include the buoyant “Down at the Shore,” “Somebody Better Get a Room,” and “Make Me Believe.” The last has religious and spiritual overtones, and was inspired by the Columbine school shooting.

Given the way the music is distributed today and with instant access via streaming services, Petersen hopes that both people who missed the band during the ‘80s and who weren’t even born yet might discover their music. Even if they don’t get that Saturday Night Live re-invite. But one thing took her by surprise that was only the stuff of science fiction novels in 1982.

“When the internet first came about and we reformed, I was stunned to find out how many fans we had!” she laughs. “That was amazing for us to know! They’re out there!”

For more on the Catholic Girls, visit CatholicGirls.net
KEEP THE HOUSTON PRESS FREE... Since we started the Houston Press, it has been defined as the free, independent voice of Houston, and we'd like to keep it that way. With local media under siege, it's more important than ever for us to rally support behind funding our local journalism. You can help by participating in our "I Support" program, allowing us to keep offering readers access to our incisive coverage of local news, food and culture with no paywalls.
Make a one-time donation today for as little as $1.