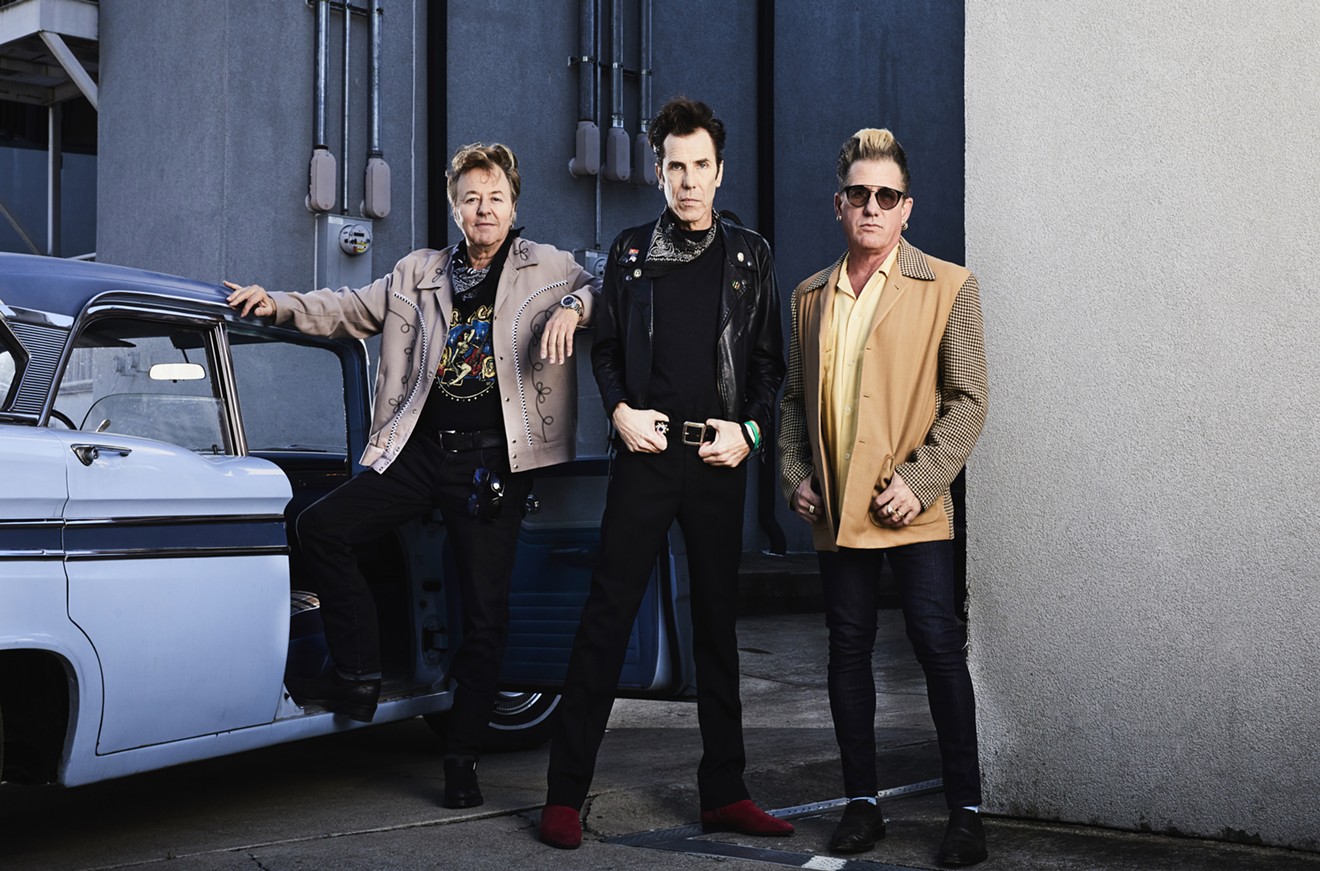 The Stray Cats, still rockin' cool after 40 years: Brian Setzer, Slim Jim Phantom, Lee Rocker. Photo by Russ Harrington/Courtesy of SRO PR
In 2019, fans of rockabilly revivalists the Stray Cats were ecstatic to hear that in celebration of their 40th anniversary, the band would reunite for a short tour and release their first studio album of new music in 26 years. The trio of Brian Setzer (vocals/guitar), Slim Jim Phantom (drums), and Lee Rocker (bass/vocals) recorded many of the shows, and this month they’ll release the live Rocked This Town: From LA to London (Surfdog Records).

“Anytime you can put a round number on something it makes it more special. The ‘37th anniversary’ just doesn’t sound quite the same!” Phantom laughs. “And it’s good to have an excuse to get together. Plus, we’ve never had a proper live album.” He also ruminates about timing, given what’s gone on with live music during the Age of Coronavirus. “I’m just glad we didn’t start the band in 1980!”

Album cover
The 23-track CD/double LP touches on all areas of their discography: the hits (“Stray Cat Strut,” “Rock This Town,” “[She’s] Sexy + 17”), fan faves (“Double Talkin’ Baby,” “Runaway Boys,” “Rumble in Brighton,” “Fishnet Stockings”), covers (“My One Desire”), instrumentals (“Cannonball Rag,” “Misirlou”), and a number of cuts from last year’s appropriately (if unimaginatively) titled album, 40 (“Cat Fight [Over a Dog Like Me],” “Three Time’s a Charm,” “Mean Pickin’ Mama,” and “When Nothing’s Going Right” – the last with a rare lead vocal from Rocker). The process of making it was both happy and unprecedented.

“For the first time ever, we actually had a plan for something! And [releasing] the record and touring on it was part of that. Brian had a great artistic run and was just writing all these great new songs,” Phantom says. “It came together very quickly, and we found a studio in Nashville.”

The Cats with their companion lady kittens then each rented houses in the city and kept a regular schedule with studio hours, even taking communal lunch breaks, something they hadn’t really done before. “It helped us keep our focus when we were there about a month. We even took Sundays off!”

The Stray Cats were formed in 1979 by Setzer, Phantom, and Rocker – all school and neighborhood friends from New York’s Long Island town of Massapequa. But when their brand of decidedly retro rockabilly wasn’t sparking on these shores, they moved to the United Kingdom where a ‘50s revival scene was in full swing. It took heavily-rotated MTV videos for “Rock This Town” and “Stray Cat Strut” to change their fortunes in America in 1982. But their heyday was brief, and the trio split two years later.

That this most American of bands had to go overseas for their initial success puts them in company with artists like Jimi Hendrix, Suzi Quatro, and the Go-Go’s. Of course, many groups in the ‘60s British Invasion from the Beatles to the Rolling Stones to Cream essentially gave back to the kids on these shores their spin on American blues and early rock. The Cats’ on-their-sleeves inspirations include Eddie Cochran, Gene Vincent, Buddy Holly, Bo Diddley, Carl Perkins, Chuck Berry, and the Burnette brothers.


“When we met Keith Richards the first time and he knocked over a bottle and an ash tray he said ‘All we did was sell your music back to you,’” Phantom offers. “But of course, they put their own spin on it. And young people want the messenger to look like them.”

Thus, The Stones’ “Little Red Rooster” was easier to digest (on record and TV screen) than Howlin’ Wolf or his original. Or U.S. teens could relate to the Beatles’ take on Carl Perkins songs far more than from the “older” Perkins himself. “Every generation will have its Clapton or Stevie Ray Vaughan or Kenny Wayne Shepherd or John Mayer,” Phantom offers. “People who play the blues and rockabilly of an [older artist] but younger people can relate to.”

Over the decades, the Stray Cats have periodically reunited for new records and tours, and pursued concurrent careers both solo and with other groups (Setzer’s being the most prominent with the Brian Setzer Orchestra). One of Phantom’s other groups was The Head Cat, a rockabilly trio featuring Lemmy from Motörhead and guitarist Danny B. Harvey. After Lemmy’s death in 2015, David Vincent (ex-Morbid Angel) took his place.

Phantom says he spent “a lot of time” with Lemmy, Lemmy’s son, and a small circle of friends around the Motörhead frontman’s bedside in the weeks leading up to his passing. Though he missed the actual event by minutes. “I was with him at the end. I had just left [the room] and gone outside to get some air and put some money in the meter. And when I got back, he was gone.” Slim Jim Phantom
Photo by Russ Harrington/Courtesy of SRO PR
Like Houston’s ZZ Top, the Stray Cats have kept their original lineup intact. Phantom says there’s a chemistry between him, Setzer, and Rocker that would be completely off-kilter if any one of them were not there. Especially given that they were all friends for years before they ever decided to form a band.

“A trio is such a funny thing. There’s a certain style to playing in one, and I don’t it would be the same with someone new,” Phantom says. “Especially playing rockabilly. There’s nothing to hide behind!”

When he’s not on Cat Patrol, Phantom is still quite busy. In addition to various musical and fashion projects and giving private drum lessons, he published an autobiography in 2016, A Stray Cat Struts: My Life as a Rockabilly Rebel. He also has a podcast via the Patreon platform and hosts the weekly show “Slim Jim’s Rockabilly Rave Up” on SiriusXM’s Underground Garage Channel.

That gig came about after a brief encounter with the UG’s head honcho, Little Steven Van Zandt. “I went to see him play in LA and give him a book because we had gotten friendly on Twitter – mostly talking about old television shows!” Phantom laughs.

“He asked me if I had any ideas, and I told him about the idea for the show and making parallels between rockabilly music and the bands that were influenced by them. I also wanted to find and play new or [not well known] rockabilly music. He looked at me, scratched his chin just like he does as Silvio in The Sopranos and goes ‘All right, you’re in. Have a show ready in three weeks. Just promise me you’ll play Carl Perkins songs I haven’t heard!’”

For more on the Stray Cats, visit StrayCats.com
For more on Slim Jim Phantom, visit SlimJimPhantom.com
KEEP THE HOUSTON PRESS FREE... Since we started the Houston Press, it has been defined as the free, independent voice of Houston, and we'd like to keep it that way. With local media under siege, it's more important than ever for us to rally support behind funding our local journalism. You can help by participating in our "I Support" program, allowing us to keep offering readers access to our incisive coverage of local news, food and culture with no paywalls.
Make a one-time donation today for as little as $1.