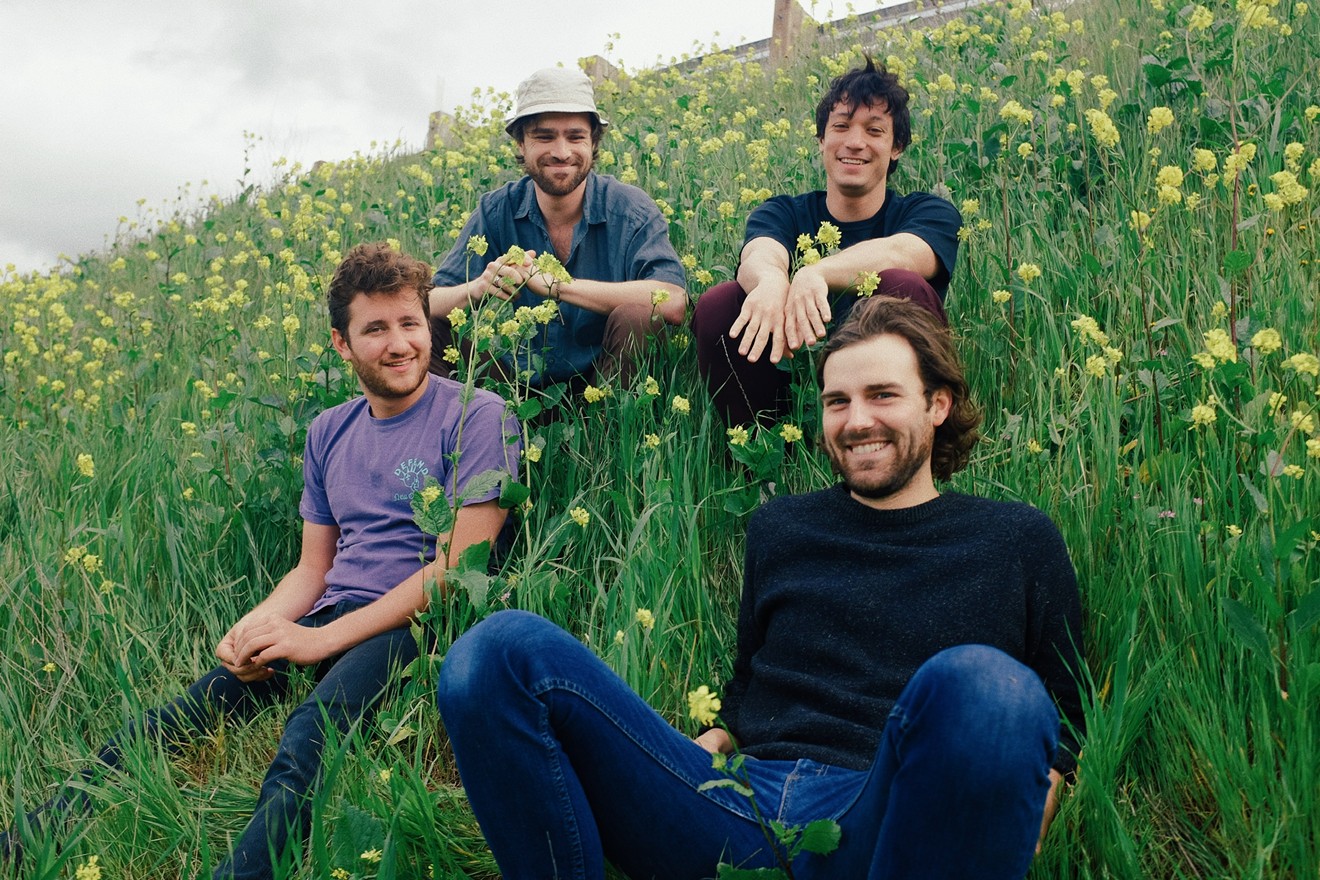 With its confident, groove-based brand of indie rock tunes, New Orleans' Motel Radio hits its stride with Siesta Del Sol. Photo by Michael Tucker
Before diving into the debut full-length from Motel Radio, all signs indicate that the experience is certain to be a soothing one. Initially, your eyes lock into the album artwork, which by the use of a beach-themed color palette, amounts to a mountain range of faces being drenched by an overhanging sun. Then there are the words Siesta Del Sol displayed below, an album title that translates to Nap of the Sun, only further indicating the mellow mood that lies within. By the time you make it through the opening seconds of the intro track, “Ego Death,” these suspicions are all but confirmed, as the sustain-heavy guitar play eases you into what ultimately amounts to 43 minutes of dreamy rock tunes.

However, Siesta Del Sol is not the debut typical of today’s fast-paced musical landscape (i.e. one that seems to appear overnight, quickly catching on through the musical ranks and jump-starting the career of a band that practically came out of nowhere). Instead, Siesta Del Sol represents a product of time—a detailed collection of songs from a group that has put in the work both on the road and in the studio, gradually developing their sound and personality over the years.

Formed in 2014 during their final year at Louisiana State University, Motel Radio, with its harmony-filled catalog of songs, quickly made a name for itself within the Baton Rouge circuit before deciding to “put off the real world” and make the move to New Orleans. What followed was the release of two EPs (2015’s Days & Nights and 2016’s Desert Surf Films), a host of national tours, and a great deal of time spent writing, recording, and evolving together in the cultural hub that is New Orleans.

In talking with the band days after the album’s release, they open up on the city’s influence. "It not only introduced me to a ton of amazing old music like Irma Thomas, Lee Dorsey, and Ernie K. Doe,” says Woodlands-born vocalist/guitarist, Ian Wellman. “It also makes you take things less seriously. Like at the end of the day, it’s just music. It was here before you and will be here after you, so contribute your part and open yourself up to everyone else’s. It’s also absurd how many incredible musicians play every night in New Orleans; that’s really inspiring.”

In listening back on their earlier material, the evolution of Motel Radio is apparent. For instance, with Days & Nights, the group’s sound tends to fall in line with Americana artists of the time, with finger-picked guitars and sing-a-long melodies taking front and center (a la Houndmouth and Rayland Baxter). With Desert Surf Films, however, the band’s psychedelic and garage influences begin to take hold, representing a more reverb-drenched/surf-heavy sound (a la The War on Drugs and Real Estate).

Guitarist/vocalist Winston Triolo puts it plainly, “We got less folky and more groovy when we moved down there. New Orleans is a party, and the people wanna dance. So we cater to them without losing ourselves.”


While both EPs clearly display the songcrafting prowess of the foursome, with enough hook-filled tunes to satisfy any comfortable fan of lyrical indie rock, it’s evident that these early iterations of Motel Radio were a band still finding itself—capable of something greater.

With Siesta Del Sol, they achieve that greater something. Aside from being the band’s far most ambitious work to date (both in terms of length and production value), Siesta Del Sol represents the sound of Motel Radio in its fully-realized form—a confident, groove-based brand of indie rock that utilizes just enough of the band’s traditional singer-songwriter spirit.

Take “Liquor Dreams,” for example, a track that perfectly lays out the Motel Radio formula. There’s the harmonic exchange between both vocalists, the '60s-tinged lead guitar play throughout each break, and a sing-a-along breakdown of “Doo doo-ya’s” to finish the tune off. This of course all occurs behind the ever-tame groove set by Eric Lloyd (on drums) and Andrew Pacamo (on bass), which can be heard anchoring the entirety of the album—never at risk of falling outside of the pocket.

That isn’t to say that Siesta Del Sol doesn't venture outside of this formula. With “M.I.A.,” for instance, the band incorporates synths, drum machines, and the pedal steel play of May Davidson (of the band Twain), to create a unique standout of the album. As a favorite among the band, Wellman explains how “the process of making the song just felt really natural and magical. We were in a groove already and we weren’t afraid to try to get some weird sounds.”

On the topic of natural creativity, the entire recording process for Siesta Del Sol fell in line with the more laissez faire attitude of New Orleans, with the band slowly creating as the time called for it. “The vast majority of the album was recorded with our friend Eric Heigle at his studio in New Orleans. He lives a block away from Winston and I, so we’d just walk over and chip away for a few hours at a time. We also tracked some of it ourselves at our little home studio and we did some vocal stuff with Ross Farbe from Video Age. It was really convenient. Almost too convenient sometimes.”

Though at times the band, “felt like it was never gonna get done,” you can’t help but hear the effect that this approach had on the music itself. Even at their most upbeat, these tunes carry a heightened level of patience and restraint. As opposed to skipping through for every grandiose moment, this restraint encourages the listener to settle into the entire album as one consistent ride—an increasingly sought after facet in today’s world of instant-gratification.

Yet, make no mistake about it. The central appeal of Siesta Del Sol rests in the vocals of Wellman and Triolo, who exchange lead duties throughout the album. With tones that naturally blend together, the two voices intersect and harmonize at nearly every line, providing each tune with the necessary peaks and valleys. One track in particular that highlights this effect is “Midnight,” the album’s lead single. In it, Wellman’s lone voice anchors the verse with potent lines like “I found a friend in the soft wind of a summer night / We left the world, me and my midnight girl on a motorbike ride.” However, it’s when Triolo's harmonies fade over Wellman during the pre-chorus and chorus where the pastoral feel of the tune truly manifests itself, ultimately giving it a CSNY-like hook that’ll stick with any listener for the remainder of their day.

It’s methods such as these that make Siesta Del Sol such a pleasant, easily-repeatable body of work. The true appeal, however, is not in the methods themselves (as something as trivial as harmonizing is far from innovative), but rather Motel Radio's execution—knowing exactly when to apply what, and just how much to apply.
KEEP THE HOUSTON PRESS FREE... Since we started the Houston Press, it has been defined as the free, independent voice of Houston, and we'd like to keep it that way. With local media under siege, it's more important than ever for us to rally support behind funding our local journalism. You can help by participating in our "I Support" program, allowing us to keep offering readers access to our incisive coverage of local news, food and culture with no paywalls.
Make a one-time donation today for as little as $1.