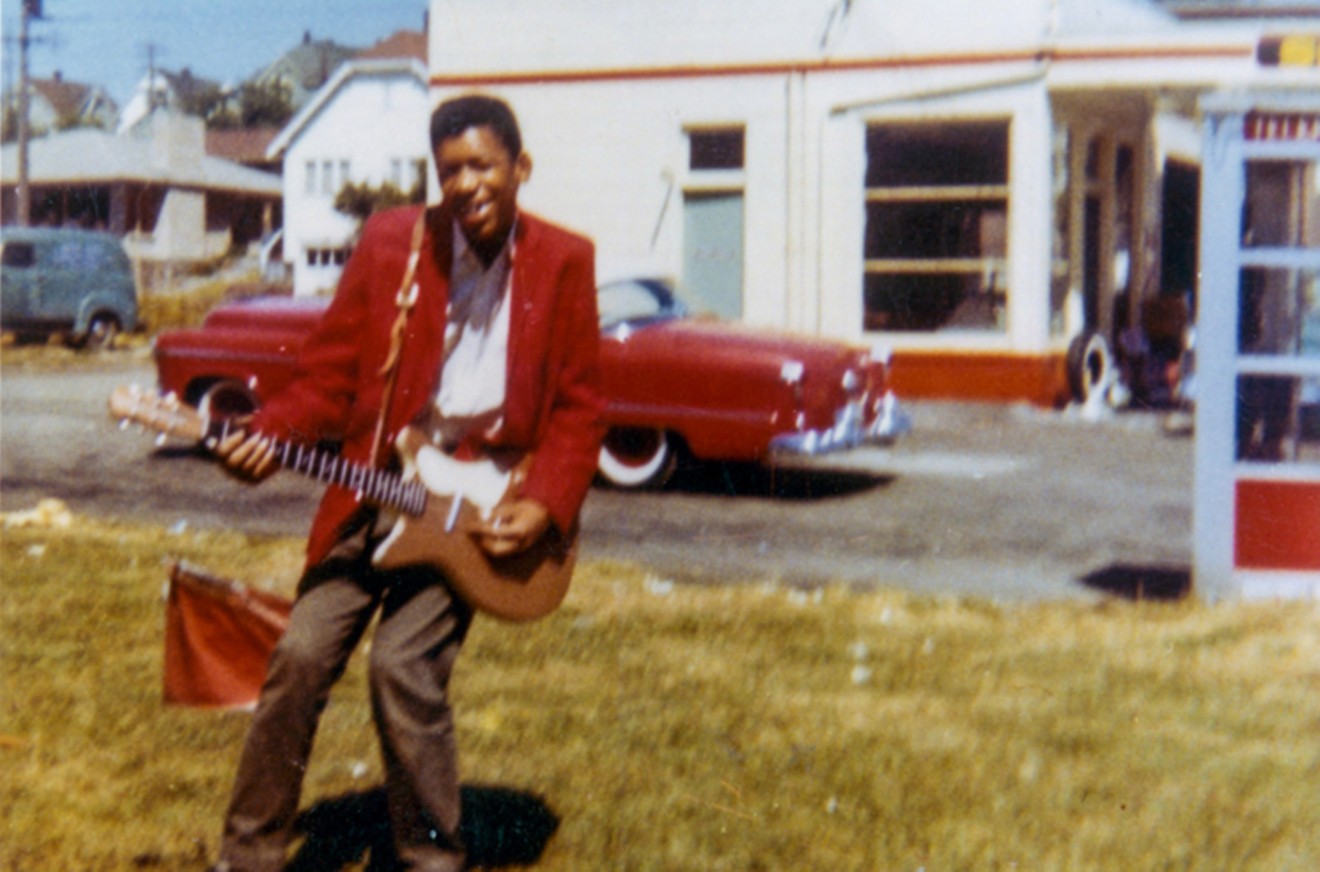 Jimi Hendrix with his Danelectro guitar, circa August 1960, outside the family home on Yesler Street in Seattle, WA. Courtesy James "Al" Hendrix Collection/© Authentic Hendrix, LLC
There are a lot of estate organizers, trusts and conglomerations that look after the posthumous interests and product of rock stars. But Experience Hendrix, LLC, is the gold standard in terms of how it should be done, for the artist who died in 1970 at the age of 27.

Jimi Hendrix at the Royal Albert Hall in London, Feb. 18, 1969.
Photo by Graham F. Page/MoPOP/Authentic Hendrix, LLC
In an effort to celebrate and continue the legacy of Jimi Hendrix, the organization (founded in 1995 by Jimi’s father Al and now overseen by half-sister Janie), has steadily released material by and based around the man generally thought of The Greatest Guitarist Ever. And that’s especially true in terms of putting out new (!) music in the form of box sets, live releases and obscurities, all sounding great and well annotated.

Two new products are out to celebrate what would have been Hendrix’s 80th birthday this November 27. The first is Jimi Hendrix Experience: Los Angeles Forum, April 26, 1969.

The live recording captures the original band toward the end of their lifespan. They would play their last show together two months later, as tensions between Hendrix and bassist Noel Redding over creativity and input had reached a fever pitch.

While including popular evergreens “Foxey Lady” and “Purple Haze,” it opens with the expansive 16-minute instrumental “Tax Free.” Written as a jazz instrumental by Bo Hannson and Janne Karlsson. Hendrix turns it into pure rock magic.

In fact, Hendrix stretches out with extended improvs and solos on other tracks like the normally-compact “Spanish Castle Magic” and closer “Voodoo Child (Slight Return)” which morphs into Cream’s “Sunshine of Your Love” before going back again.

The CD includes Hendrix’s onstage raps, in which he frequently mentioned police presence at the show, dedicating one number to the “plainclothes policemen” in attendance (and also name checking the TV countercultural comics the Smothers Brothers). And after the show is stopped when some excited audience members rush the stage, he attempts to calm them down by noting “I don’t feel like looking at these cats in blue hats.” It wouldn’t be the last time he’d have to calm the crowd. Book cover
This show also busts the myth that’s grown over the years of how Jimi Hendrix played his own distinct (and controversial to some) version of “The Star Spangled Banner” at Woodstock a few months after this show strictly because the event inspired him. In introducing a shorter version of it here, Hendrix takes a more negative view of the song by pronouncing “Here’s a song that we were all brainwashed with. Remember this oldie but goodie?”

In addition to liner notes, there’s an essay penned by ZZ Top’s Billy Gibbons, who had befriended Hendrix, was actually in attendance at this particular show, and whose band The Moving Sidewalks had opened up some Texas dates for the Experience.

For the more literary tastes, there’s the gorgeous coffee table book, simply titled Jimi, written by Janie Hendrix with Jimi scholar/writer/director John McDermott (320 pp., $50, Chronicle Chroma). And while the text does take the reader through Hendrix’s life (even back to when he was, surprisingly, very shy onstage!), there are deeper, more detailed bios out there.

Some nuggets of info explain how Mitch Mitchell only became the drummer for the Experience when the similarly-pursued and equally-considered Aynsley Dunbar—unbeknownst to either drummer—came out on the losing side of a private coin toss. And that Hendrix really, really disliked the UK cover of Electric Ladyland—featuring 19 nude female models in a blatant publicity grab by the record company—because he felt that it diminished the music inside.

The treasures here are the hundreds of in concert, casual, and staged photographs, posters and ephemera reproduced, as well as quotes from Jimi himself sprinkled throughout. 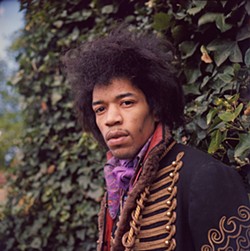 Jimi Hendrix in Nottingham, England, April 20, 1967
Photo by Tony Gale/© Authentic Hendrix, LLC
Not surprisingly for an authorized bio, there are two areas of Hendrix’s life that the text all but ignores or glosses over: his prodigious appetites for women and drugs. In the former, names of a couple girlfriends are briefly mentioned, and nothing about negative allegations that some have made about physical or mental treatment.

In the latter, discussing a 1969 bust in Toronto where a hash pipe and heroin were found in Jimi’s bag, all that’s said on the subject is “Jimi had experimented with numerous illegal substances in recent years, but in this instance, he denied the drugs were his.” Yeah, sure.

Still, both the record and book are more than welcome additions to the Jimi Hendrix shelves. And his musical accomplishments are all the more impressive when you consider he created all that seemingly endless music in only about four years.

Proof of that passion for his six-stringed instrument (which he purportedly slept with while serving in the Army) comes not from a music journalist, record producer, fan or manager. It comes from a report filed by Sgt. Louis Hoekstra in one of Jimi’s government personnel files.

“Private Hendrix plays a musical instrument during his off-duty hours, or so he says,” it reads. “This is one of his faults, because his mind apparently can not function while performing duties and thinking about his guitar.”

Seems like the United States military’s loss was definitely rock and roll’s gain.
KEEP THE HOUSTON PRESS FREE... Since we started the Houston Press, it has been defined as the free, independent voice of Houston, and we'd like to keep it that way. With local media under siege, it's more important than ever for us to rally support behind funding our local journalism. You can help by participating in our "I Support" program, allowing us to keep offering readers access to our incisive coverage of local news, food and culture with no paywalls.
Make a one-time donation today for as little as $1.