The Krayolas Color a New (But Classic) Tex-Mex Sound 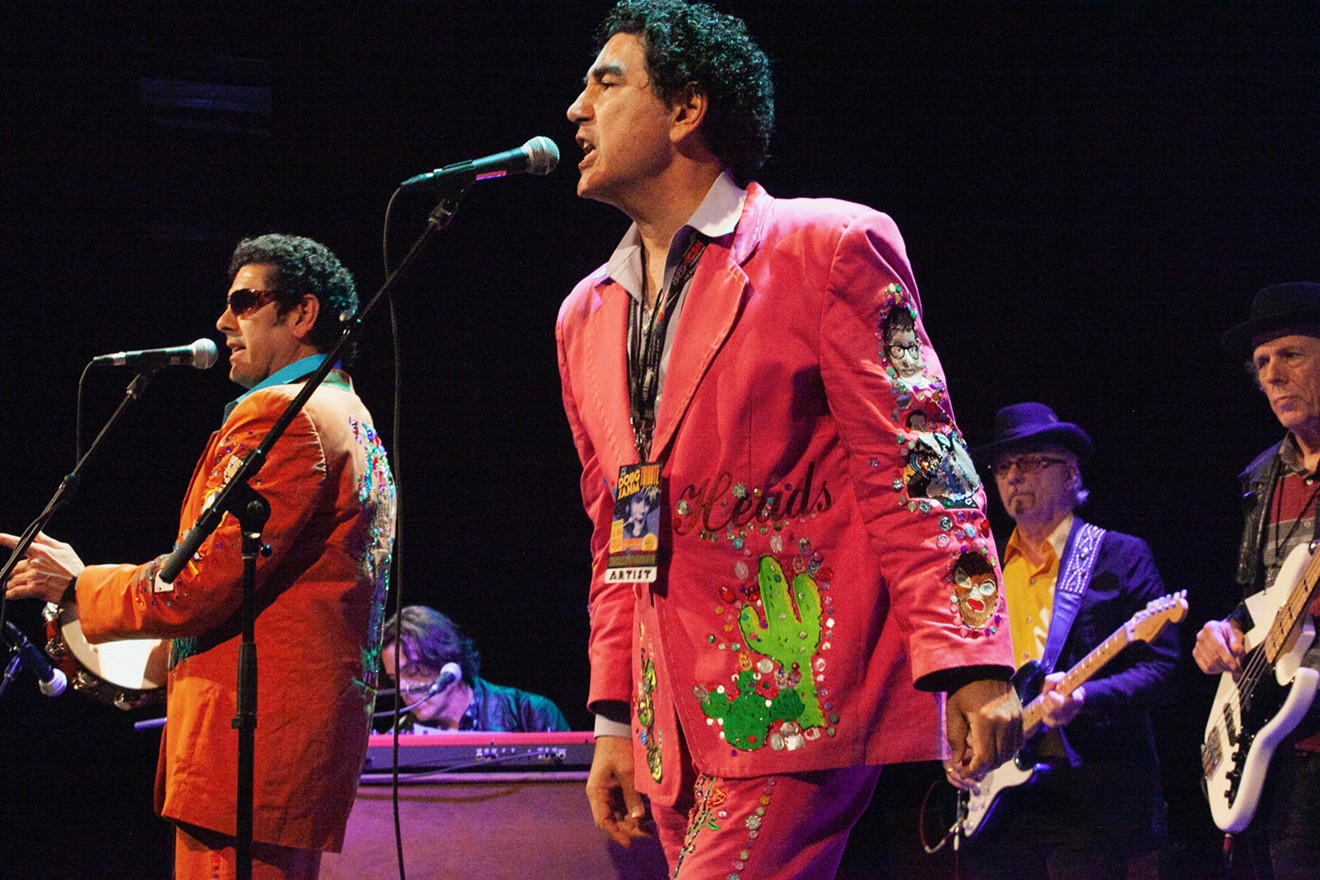 So listeners across North America got to experience a little bit of both when DJ The Mighty Manfred welcomed Hector Saldana – lead singer/guitarist for the San Antonio-based Krayolas – recently to his “Coolest Conversations in the World” interview segment to preview the band’s latest single, a cover of Lesley Gore’s 1964 hit “Maybe I Know” (with brother David Saldana taking lead vocals). 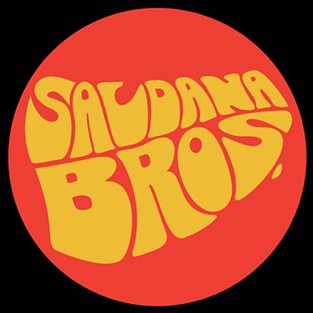 Box Records EP cover
It’s not the most unlikely song on the Krayolas’ new six-song digital EP, Saldana Bros. Though it does also include more traditional Garage Rock sounds (atmospheric organ, stinging guitar, punchy singing, hard-charging rhythms) on “Psychophant,” “Baby, I Was Wrong,” and “Sometimes the Bridesmaid, Sometime the Bride.” There’s even a Spanish-language tribute to “El Cucoy,” the Mexican Boogie Man of Lore.

But the tune that’s out of character for the band is “The Murder at the Taco Land,” based on the real-life June 23, 2005 robbery attempt at the storied San Antonio punk rock club. The incident resulted in the shooting deaths of the club’s owner and an employee, and the song is told from the perspective of a second employee who survived her injuries. The killer is currently on Texas death row, and his accomplice is serving a decades-long prison sentence.

Adding to the bizarreness of the slow-paced 7+ minute character story song (akin to something you’d find on an early Bruce Springsteen album), the crime took place as the city was celebrating the NBA championship of the hometown San Antonio Spurs that same evening. Patrons were watching the game on the club’s TVs. The tune’s somber tone was also influenced by the fact that it was the first song recorded by the brothers after the death of their beloved father from a progressive brain disease.

Hector and David Saldana first formed the Krayolas in 1975 while still teenagers. Though the brothers (and their sister) were born and lived in Houston for a bit, by that date they had been settled in San Antonio. Their Tex-Mex brand of garage rock mixed originals with covers of the Beatles, Who, and Kinks (the “K” that started the Krayolas’ name was Hector’s tribute to his favorite group).

And if you think that stereotype about brother in bands spending a lot of time battling each other has roots in accuracy…you would be correct.

“We fought a lot. And as a matter of fact, we still do!” Saldana laughs. “When I got my first guitar, we broke it during a fight. But our parents were very encouraging of our interest in music, and I got my next one at age 11. We were fans of AM radio and the music of the era and even when David was playing drumsticks on a box and I was using a tennis racket as a guitar, we could sing together.”


Within the next few years, they became a popular local and regional touring attraction, including around their birthplace. “The Krayolas used to play so much in Houston in the late ‘70s and early ‘80s at places like Fitzgerald’s and Rockefeller’s,” Saldana says. “They were big breaks for us, and Houston was one of the best spots for to play.”

Over the next decade, the Krayolas released a string of self-produced 45 singles, and opened for acts ranging from Stevie Ray Vaughan and Chuck Berry to Christopher Cross and Michael Bolton. They even showcased at famous clubs like the Bottom Line and New York and the Roxy in Los Angeles.

But that big breakthrough didn’t come for the Krayolas, and the brothers dissolved the band in 1988. Their last 45 was the appropriately-titled cover of Harry Nilsson’s “You’re Breakin’ My Heart,” complete with the original chorus lyrics of “fuck you!”

“We had a good run and played some great places, but it was time for grown men to stop babysitting each other,” Saldana says. “We were always the bridesmaid and never the bride, we couldn’t quite get to that next level with recording. We did get a production deal, but they kind of strung us along.”

Flash forward to 2007 when the brothers began reissuing their material, and it caught the ear of Sir Douglas Quintet/Texas Tornado keyboardist and Lone Star Stage Garage Rock legend Augie Meyers. He gave the brothers a song (“Little Fox”) and both played on and produced the first of several Krayolas records since then (La Conquistadora).

That inspired the Saldanas to reignite the band as a performing entity, and they had a high-profile gig at the 2015 SXSW Doug Sahm tribute show. The current touring/recording lineup includes Hector, David, Hector’s son Nicky Saldana (guitar), Luvin Elias (piano/organ), Jack Barber and Joe Sarli (bass), and Louie Bustos (sax). And in a bit of poetic connection, Barber is an original member of the Sir Douglas Quintet, the Doug Sahm-led group that put Tex-Mex rock on the national map with 1965’s “She’s About a Mover.”

David and Hector Saldana onstage at Rockefeller's in Houston, 1981.
Photo by Bill Summersett/Courtesy of Hector Saldana
Now that Saldana Bros. is out, though, Saldana is not taking it easy. The Krayolas already have Saldana Bros. Vol. 2 slated for release on May 5. This seven-song EP includes five new numbers and two remixes of previous material, and their may be a vinyl record issued with both EPs on it.

But the band may lose some fans from MAGA country as three of the songs directly and pointedly take on a certain current occupant of the White House (in both Spanish and English) in “Elefante,” “Piñata Trump,” and “Dreamers Song” (the last with David on lead vocals).

“We’re clear eyed and realistic – maybe fatalistic. And we didn’t want to do the same old thing,” Saldana says of the songs – not the Krayolas’ first dip into political waters. “We wanted the first EP to be fun and upbeat, which is one side of us. but there’s another side, so the second one addresses some political issues. One of our members left the group because he didn’t want to be associated with the Trump song!”

Indeed, the narrator “Piñata Trump” is desperate to destroy the paper-mache-and-streamer embodiment of the President, if only to see how empty it is. And while it’s sung in Spanish, Saldana is toying with recording a new version in English just to stoke the flames. It’s lyrics include “With his yellow hair/and his colorful mouth/knock down the piñata Trump/a peacock who presumed/its feathers are the best/ knock down the piñata Trump.”

“I didn’t want there to be any ambiguity about it!” Saldana says. “And in the Spanish language, you can add a little more mischief to it. I don't know if that makes any sense, but there’s a little slyness to it.”

Saldana Bros. is available for streaming and purchase on multiple platforms including iTunes, Apple Music, YouTube, and Spotify. For more info on the band visit TheKrayolas.com
KEEP THE HOUSTON PRESS FREE... Since we started the Houston Press, it has been defined as the free, independent voice of Houston, and we'd like to keep it that way. With local media under siege, it's more important than ever for us to rally support behind funding our local journalism. You can help by participating in our "I Support" program, allowing us to keep offering readers access to our incisive coverage of local news, food and culture with no paywalls.
Make a one-time donation today for as little as $1.