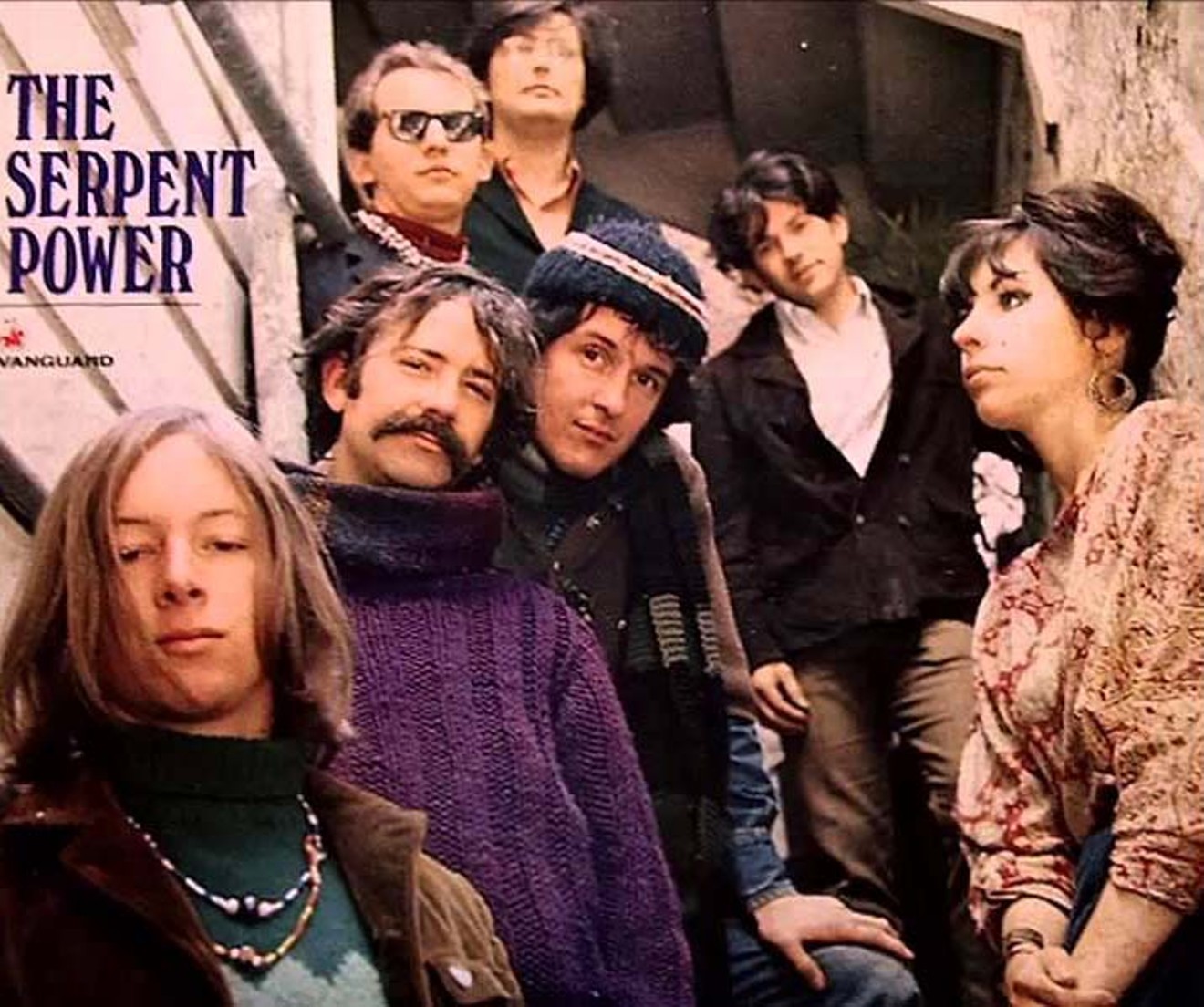 The Serpent Power slither onto new compilation of lost psychedelic rock with "Open House." Vanguard Records album cover
Intended to replicate an LSD or mushroom trip—or as much at that’s possible with music—the Psychedelic Rock of the 1960s was definitely a distinct genre. Its laundry list hallmarks including swirling organs, freakish guitar solos, swooshing sound effects, and often non-linear (or nonsensical) lyrics. And lots about sunlight and daisies and colors and candy apple trees.

But in the liner notes for Poppies: Assorted Finery from the First Psychedelic Age (Craft Recordings), compilation producer Alec Palao in the liner notes calls it one of the most “ritually abused descriptions in popular cultural discourse.” And one that in the ensuing five decades since its heyday has often fallen into cliché and parody. 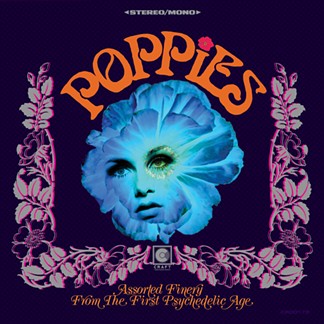 Album cover
“On a sort of pan cultural basis, psychedelic rock means freedom. On a musical basis, it loosens restrictions of music making for pop and rock specifically,” he offers. “In the hands of the right people, it can be incredibly inspiring and marvelous. It can bring an expansion to the best music. But you have to be inspired, and you have great stuff. If you’re not, well…there’s a lot of music from that time hasn’t worn too well.”

Palao adds that, despite common opinion, being whacked out on any substances is not a requirement to enjoying the music either. “You don’t have to take drugs. I’ve always thought that was a misnomer. I’ve never taken any kind of a drug – which a lot of people find hard to believe!” he laughs. “But if you’ve got to take something to appreciate something, there’s a flaw in that. Now, drugs can help get to that point of psychedelia, but they’re not [necessary].”

For Poppies, Palao certainly wasn’t interested in curating well-wafted incense burners like Jefferson Airplane’s “White Rabbit,” Iron Butterfly’s “In-a-Gadda-da-Vida,” or even the Strawberry Alarm Clock’s “Incense and Peppermints.” Instead, the 13-song list goes deep with a number of yes-that’s-really-their-name bands including The Sot Weed Factor (“Say It Isn’t So”), The Honey Jug (“In 1582 We”), The Pasternak Progress (“Flower Eyes”), and The Serpent Power (“Open House”).

The 1967-69 material also shows a surprising amount of sonic variety under the overall “psychedelic” banner, with elements of garage, folk, electronica, and country. There’s Buffy Sainte-Marie’s acid folk song that gives Poppies its name. And an eight-minute freakout from Detroit rockers The Frost, with singer/guitarist Dick Wagner’s scorching solo making up a bulk of that time.


Palao says that it was his goal to create a completely unique compilation for Craft Recordings. Its parent company, Concord Music Group, continues to acquire the catalogs of smaller labels—in this case the Stax, Vanguard, and Original Sound. And he relishes playing musical detective in this matter, with an ultimate goal for the listener of having the music available again, and for the label of increasing chances for possible placement on movie, TV, and even video game soundtracks.

“You’ve got this great repertoire, but you need somebody like me who knows what it is and the context it should be presented in to polish it so Mr. Hipster at these music supervision companies can go ‘Wow, I’d like to use that!’” Palao says.

“The use of music in other media has changed so much. It used to be you could only get, say, a doo wop song in a movie about the ‘50s. Now, you can get it in a high end commercial for some millennial buzz product.”

If that sounds coldly business calculated, Palao balances it out with his own music geek agenda. “My priority is turning people on to music, especially if they have never heard it before. It doesn’t take that much to go through this stuff, polish it, and put it out there.” 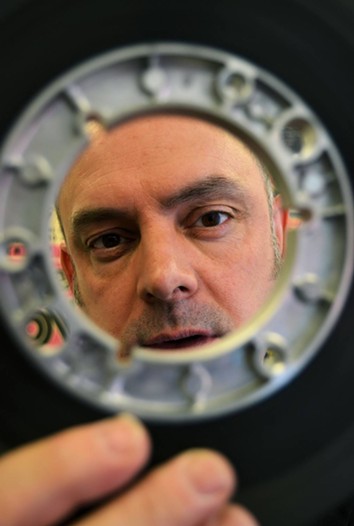 But when it’s suggested that Texas isn’t always thought of as a hotbed of psychedelic music – the contributions of Roky Erikson’s 13th Floor Elevators and the pre-ZZ Top outfit the Moving Sidewalks notwithstanding - Palao has another thought.

“I would disagree. From my earliest days perusing American ‘60s rock and roll, Texas was a hotbed of garage rock, but also psychedelic music,” he says. “Something about the conservative environment, this perceived oppression of Texas pushed [bands] to the limits and to explore in a way that they maybe wouldn’t in another part of the country.”

Palao himself has spent time in Houston – and plans to return – while sifting through the archives of SugarHill Studios to produce other music compilations as detailed by Andrew Dansby in the Houston Chronicle.

Post-Poppies, Palao is also at work for two other releases for Craft Recordings. The next release will be Double Whammy: 1960s Garage and Folk Rock Rave-Up and the other a compilation of Sunshine Pop – Psychedelia’s lighter sibling.

He will, of course, also have a busy pen (keyboard?) pounding out liner notes for various compilations like Poppies. But in an era where more and more people are accessing music through streaming and not necessarily reading about it beforehand, how can the modern liner note survive and still be appealing to both the Super Fan and the Neophyte?

Palao – who has served on committees to evaluate and nominate liner notes for the Grammys, sticks to a list of criteria he uses in his own writing. “You’ve got to have an argument. Why are we listening to this music and why is it significant? They you have the historical context of it. And then information: dates, names, places, quotes. It can’t just be a review of the contents, you know, ‘This song has a stormy guitar solo!’” he laughs.

“I would be more interested to know if [the artist] cut the record a few weeks before he died of something like that. Give the reader something they don’t know – and make it interesting. Give the listener the tools to enjoy the music even more.”
KEEP THE HOUSTON PRESS FREE... Since we started the Houston Press, it has been defined as the free, independent voice of Houston, and we'd like to keep it that way. With local media under siege, it's more important than ever for us to rally support behind funding our local journalism. You can help by participating in our "I Support" program, allowing us to keep offering readers access to our incisive coverage of local news, food and culture with no paywalls.
Make a one-time donation today for as little as $1.