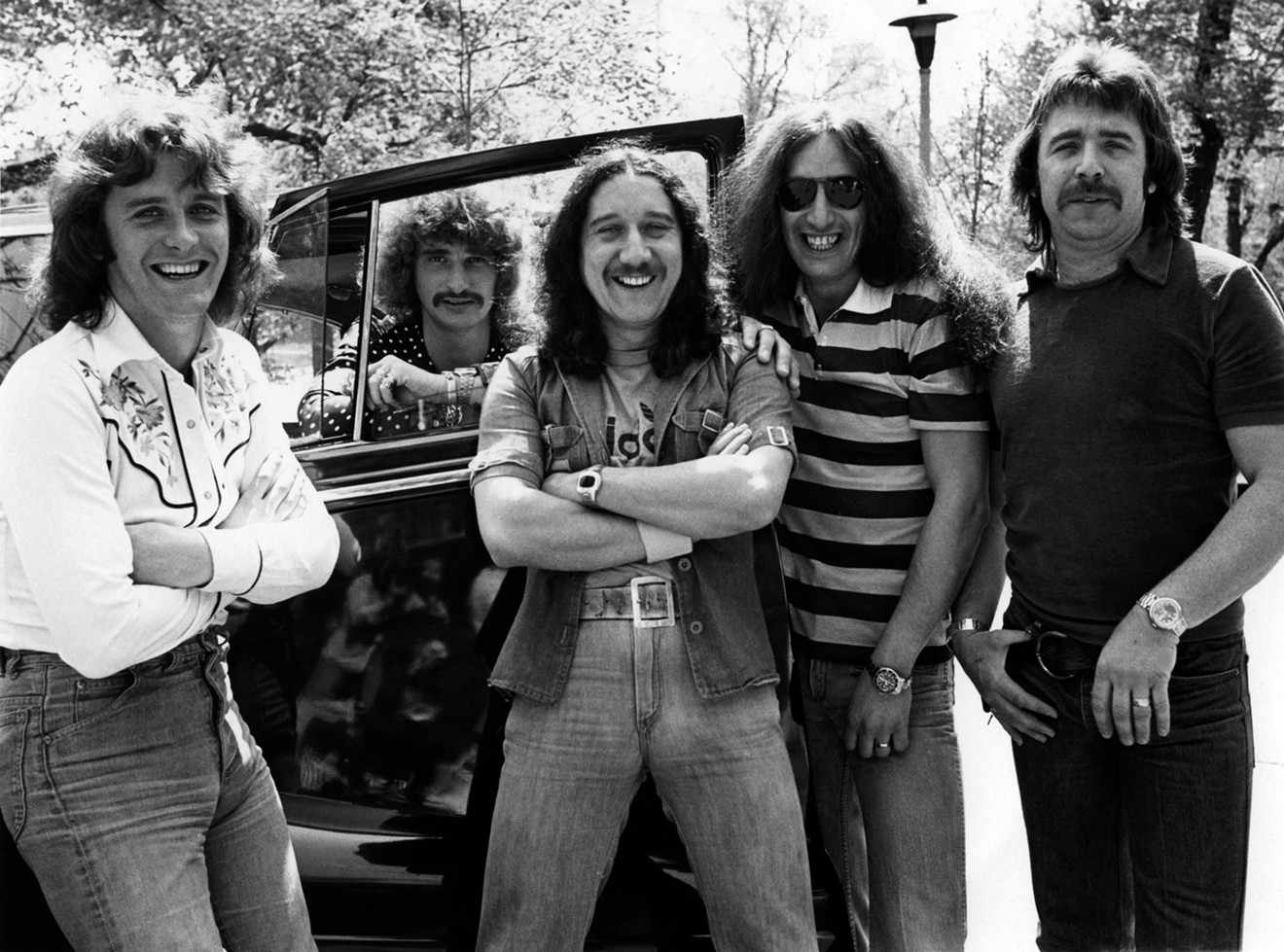 Uriah Heep in the mid-1970's: John Wetton, David Byron, Mick Box, Ken Hensley, and Lee Kerslake. Getty Images/Provided by Chipster PR
Editor’s Note: After this piece was published, news broke that Uriah Heep founding member Ken Hensley, keyboardist from 1969-1980, passed away on the evening of November 4. According to the website of Classic Rock magazine, the news was announced by his brother, Trevor, in a post on Facebook. Hensley was the band’s chief songwriter, and penned their best-known song, “Easy Livin’.”

It’s not every person who can literally hold their life’s work in their hands. But that’s what exactly happened with Uriah Heep guitarist Mick Box when he recently unpacked the band’s massive, career-spanning box set 50 Years in Rock (BMG).

“I was overjoyed, and it was an honest emotional reaction that I had. It was a sense of pride, and there was a lot of good vibes coming out of the box. It was really, really cool,” he says. 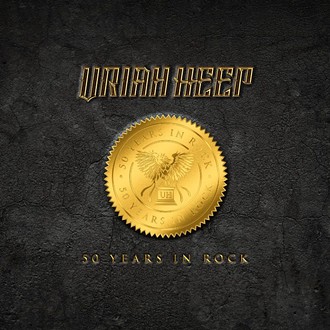 Cover of the box set
Not that the 73-year-old  is ready to put a period on music and story of Uriah Heep just yet. Though the band had to scuttle a 50th anniversary tour in 2020, they’ve been hard at work writing songs for a new record and are ready to hit the road, as Box says. “Once this COVID monster has disappeared into the ether!”

Weighing over five pounds, 50 Years in Rock features 18 CDs containing the band’s entire 24 studio album discography, another CD of their 1973 live record, and four additional CDs of material curated by original or classic lineup band members Box, Ken Hensley, Lee Kerslake, and Paul Newton, for a total of 23 discs. Though some hardcore fans have grumbled online about the absence of any rarities, demos, outtakes, or more live material.

There’s also two art cards by Roger Dean featuring both the original and “reimagined” covers for Demons and Wizards and The Magician’s Birthday, a double gatefold vinyl LP of the latter, and a 64-page album sized book featuring comments from the four members, a band timeline, and various programs, posters, and ephemera (though an opportunity was lost here for more historical or critical essays on the band’s music and career).

Mick Box is the only original member left in the current lineup that also includes Bernie Shaw (vocals), Phil Lanzon (keyboards), Davey Rimmer (bass), and Russell Gilbrook (drums). And he feels a little extra burden – gladly taken – of being that consistent link throughout the band’s entire history.

“If I’m there, the heart and soul of the band will be there. I’ve been through all the changes and kept the spirit alive of what Heep stands for,” he says. “I also wanted to keep the legacy of [deceased members) David [Byron], Gary [Thain], Trevor Bolder, and John Wetton alive. And now dear old Lee.


“Dear old Lee,” is Kerslake, who died in September of this year after a long battle with cancer. As the drummer from the glory years of 1971-79 and then again from 1981-2007, he was the member closest to Box both professionally and personally.

“I’ve known for five years that Lee’s health wasn’t the best. But five years ago, he was given two years to live. What kept him alive was music. He still managed to record a solo album and come up onstage with us every so often,” Box says. “I saw him at his home about a week before he passed away. His mind was fine, his speech was fine, but you could see that his body was in decay.”

Box says that he played his ill bandmate some demos for the upcoming Uriah Heep record. “Lee’s eyes lit up and he sat up in the bed and it was our old Lee again” Box who also spoke at the funeral, says. “We were brothers from different mothers. We went through the university of life together, running around the world creating havoc. We were a team, and I miss him.” 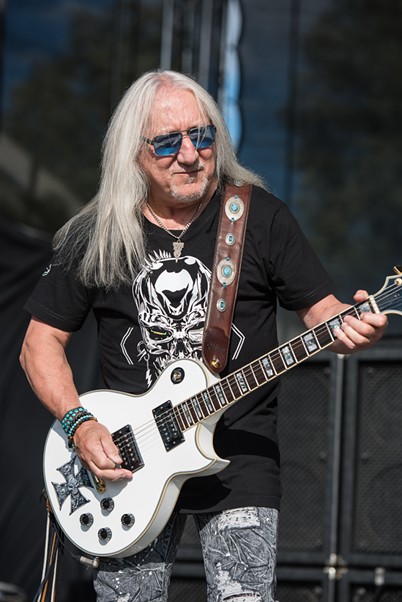 Mick Box onstage in Europe in 2017.
Photo by Stefan Brending/WikiMedia Commons
Famously, Uriah Heep took their name from one of the main characters in Charles Dicken’s 1850 novel David Copperfield. A character that Wikipedia notes was “notable for his cloying humility, unctuousness, obsequiousness, and insincerity, making frequent references to his own 'umbleness.’”

It seems that the 100th anniversary of the great author’s death was around the time of the band’s founding, so Dickens references were all over the band’s hometown of London.

While Uriah Heep had some traction on American FM radio with tracks like “Stealin’” “Sweet Lorraine,” “The Wizard” and “Easy Livin’” (the last their best known number), they never hit it big in the United States like contemporaries Deep Purple or Led Zeppelin, despite treading in the same prog rock/hard rock/proto heavy metal waters. Though they had (and still have) a loyal following in their native UK, and massive fan bases in Eastern Europe, Japan, and even Russia.

Their lack of “hits,” though, hasn’t bothered the extremely amiable Box, who ends most conversations with his trademark saying “’Appy Days.”

“We came up in the ‘70s, so we just recorded the album and if there was something on it the record company wanted to put out [as a single], great! But that was never part of our agenda, we never went looking for it,” he says.

Changing record companies and frequent lineup alterations may have played into that instability as well. But when asked if he changed up his guitar playing to match the varied styles and approaches of Uriah’s Heep’s singers and rhythm sections, he lets out a laugh.

“Ha! No, I let them change to me! Bring what you got to the table, keep the heritage of the band, but fit to me! I can’t change my playing or style!”

As for 50 Years in Rock, Box says is a reminder of a time in the music business where things were different. When fans looked forward to a release date from their favorite band as an event, songs weren’t eked out for months ahead of time, and you could actually hold a record in your hand and pore over the artwork and liner notes. And you might come for the “hit,” but it would be a deeper track that stayed with you forever.

“A lot of the heart and soul of the business has disappeared. We go into the studio and spend all this time using this incredible equipment to get the right sound, and then people just hear it on an Mp3!” Box says. “Back then, everyone’s interests were basically sport and fashion and music. Now, there’s a lot more things to take your attention. The diversions are so immense.”

Uriah Heep’s best known records are probably Demons and Wizards and The Magician’s Birthday, both from 1972. When asked with studio effort should hold the proverbial #3 slot in a listener’s collection, Box says without hesitation their last one, 2018’s Living the Dream. Uriah Heep in the early '70s: Gary Thain, David Byron, Mick Box, Lee Kerslake, Ken Hensley.
Getty Images/Courtesy of Chipster PR
“It’s a statement of where we are today. Each one of us in the band today has the passion for what we do, and we treat every show as if it’s the last one. You have to. And that’s the way it should be,” he says. Box says he has fond memories of playing Houston in June 1983 at the Astrodome in the Texxas Jam, part of a lineup that also included Styx, Sammy Hagar, Triumph, and Ted Nugent.

Today, Uriah Heep band members are also keeping themselves busy filming short videos as the “Lock Down Diaries” for their website. Box’s contributions might find him waxing nostalgic about Little Richard, the Crazy World of Arthur Brown, and (not so nostalgic) about COVID-19 itself. But by far the most scandalous, earth-shaking, and revelatory revelation came on the episode when Box was wearing a button-down shirt given to him by former Nazareth lead singer Dan McCafferty, whose band did many tours with Uriah Heep.

Box reveals that the man with the gravelly voice behind “Love Hurts” and “Hair of the Dog” had a not-so secret obsession with…ironing clothes.

“Ha! He was absolute killer on ironing shirts. We used to joke about it!” Box says when asked to elaborate.” He’d walk on stage and there wouldn’t be a crease in that shirt, mate! He was unbelievable. Army standard and beyond! But he’s such a good guy and a great singer.”

Finally, we ask Box about a bit of a discrepancy in the band’s genealogy. While most reference books and websites and the band’s own official timeline in 50 Years in Rock peg 1969 as the year of the band’s formation, how could the 50th anniversary tour have been in 2020?

For more on Uriah Heep and 50 Years in Rock, visit Uriah-Heep.com
KEEP THE HOUSTON PRESS FREE... Since we started the Houston Press, it has been defined as the free, independent voice of Houston, and we'd like to keep it that way. With local media under siege, it's more important than ever for us to rally support behind funding our local journalism. You can help by participating in our "I Support" program, allowing us to keep offering readers access to our incisive coverage of local news, food and culture with no paywalls.
Make a one-time donation today for as little as $1.