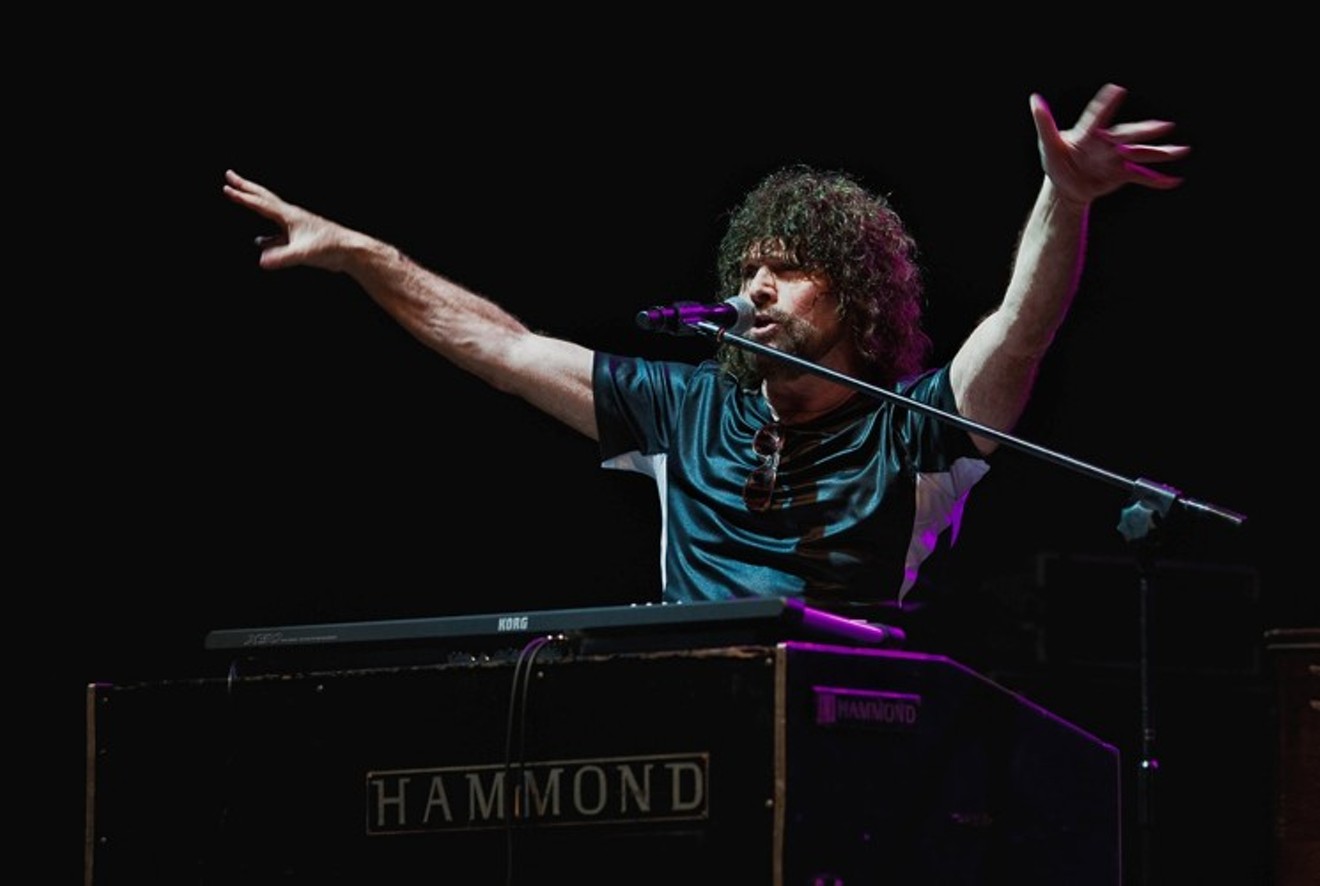 Mark Stein takes a break from his duties with psychedelic rockers Vanilla Fudge on a very-current solo record. Photo by Marek Hofman Photography/Courtesy of Chipster PR
Like a lot of Classic Rockers who make their living on the road these days, Mark Stein found himself with a lot of at-home time during the pandemic. But also like many of his musician brethren, he decided to take that forced time off and pour it into a creative endeavor, putting pen to paper to write new songs.
click to enlarge 
But while many might expect something sounding straight along the lines of Vanilla Fudge, the band he’s fronted on and off since their 1966 founding (previous name: The Pigeons!), Stein decided to take a much more contemporary view on his new solo effort, There’s a Light (Deko).

The 10 tracks of Stein originals and choice covers address topics like the pandemic, social unity and unrest, racism, immigration, generational divide, patriotism and peace. It’s not lost on Stein that these were also very much societal topics back when he started in the music business 50+ years ago.

“It started back in April 2020 with the song ‘We Are One,’ which was a reflection of what everybody on my block and in the country and world were feeling, just battening down the hatches, afraid to shake our neighbor’s hand and hug our children,” Stein says.

“We had so many chances to spread some love and human kindness in our lives. And I think this was a karmic thing. The pandemic was a karmic thing to come through. But we are one under God and under the sun. Why can’t we stop all this nonsense and just come together?”

Other socially-aware songs on the record include “Let’s Pray for Peace,” “All Lives Matter” and “Racism.” The last was inspired by a news video Stein and his wife saw on TV which showed two little boys—one Black and one white—walking to school together, hugging and laughing. The love that the kids showed to each other inspired him. Stein says that the album takes listeners on a journey of love and patriotism and social matters that we all are dealing with ("Lyin'" is the one tune that deals with issue of missing a loved one).

“It’s crazy. It’s like part of the human condition is that we have to give each other a hard time, all the time. And it shouldn’t be that way,” he offers. “And as songwriters, things that like come through us. We just want to make the world a better place, even if just a little.”
Of the cover songs, Stein chose the two very timely tracks: “Ball of Confusion” by the Temptations and “People Got to Be Free” by the Rascals, the latter were early musical heroes of Stein and part of the blue-eyed soul that was dubbed “The Long Island Sound” in the ‘60s and ‘70s. The record closes with the standard “America the Beautiful.” And the entire record swings from hard rock to prog rock to gospel and balladry.

Stein says that “Ball of Confusion” (written by Barrett Strong and Norman Whitfield) in particular means a lot to him, both when it originally came out in 1970 and a version he was asked to produce for the soundtrack to the 2010’s Rockin’ the Wall. That documentary was about the role of rock music in bring down the Berlin Wall and chipping away at the Iron Curtain.
In Stein’s main gig, Vanilla Fudge are best known for their heavily heavy and psychedelicized cover versions of popular songs. Their biggest hit was an unlikely take on “You Keep Me Hangin’ On.” The bouncy, tentative kiss-off that Motown’s the Supremes originally recorded became something far darker and more sinister in the musical hands of the Fudge.

Director Quentin Tarantino must have thought so as well, as he used it in the most pivotal moment in his recent Charles Manson alternate history flick Once Upon a Time in Hollywood. It hit No. 6 on the charts in 1967, and according to Stein was recorded in one take. The band has also “Fudged Up” songs like “Ticket to Ride” (the Beatles), “Season of the Witch” (Donovan), and even “The Look of Love” (Dusty Springfield).
In recent years, though, the band has looked to one-time tour mates Led Zeppelin for inspiration. They recorded an all-Zep album some years back, and last year their take on “The Immigrant Song” appeared just before a reissue of an older version of “Rock and Roll.” The band has just released their version of “Ramble On.” So, what makes Led Zeppelin such rich source material for reinterpretation?

“Since we toured together as kids, our histories have been [intertwined]. Back in 2006, we and our management thought it might be a good idea to partake on Zeppelin songs because of the connection,” Stein says. “But we put our own spin on them, of course.”

Various lineups and reunions have happened since the band’s original breakup. The current lineup includes original members Stein, Vince Martell (guitar) and Carmine Appice (drums). Pete Bremy has held down the bass since the retirement of Tim Bogert in 2009, who also passed away earlier this year.
Recently, Vanilla Fudge did about nine shows (most on a co-bill with the Doors’ guitarist Robby Krieger and his band), their first in nearly two years. “It was a great experience after so much time off, and great to connect with a live audience again. It was a high-energy, inspiring event,” Stein says—adding that blues guitar hero Joe Bonamassa joined them onstage at one recent outing.

But Stein is excited about the release of There’s a Light, even if some of the lyrics find him wandering of his previous path.

“I’ve had some resistance along the way, some people were afraid of these songs when I wrote them,” Stein says. “But now that they’re coming out on an album, they’re like ‘Now’s the time for this!’ But it always was the time. And I just tell it like it is.”

For more on Mark Stein, visit Mark-Stein.com.
For more in Vanilla Fudge, visit VanillaFudge.com
KEEP THE HOUSTON PRESS FREE... Since we started the Houston Press, it has been defined as the free, independent voice of Houston, and we'd like to keep it that way. With local media under siege, it's more important than ever for us to rally support behind funding our local journalism. You can help by participating in our "I Support" program, allowing us to keep offering readers access to our incisive coverage of local news, food and culture with no paywalls.
Make a one-time donation today for as little as $1.