Is Heartbreaker/Breakee Tom Foti the Only Guido in Houston? 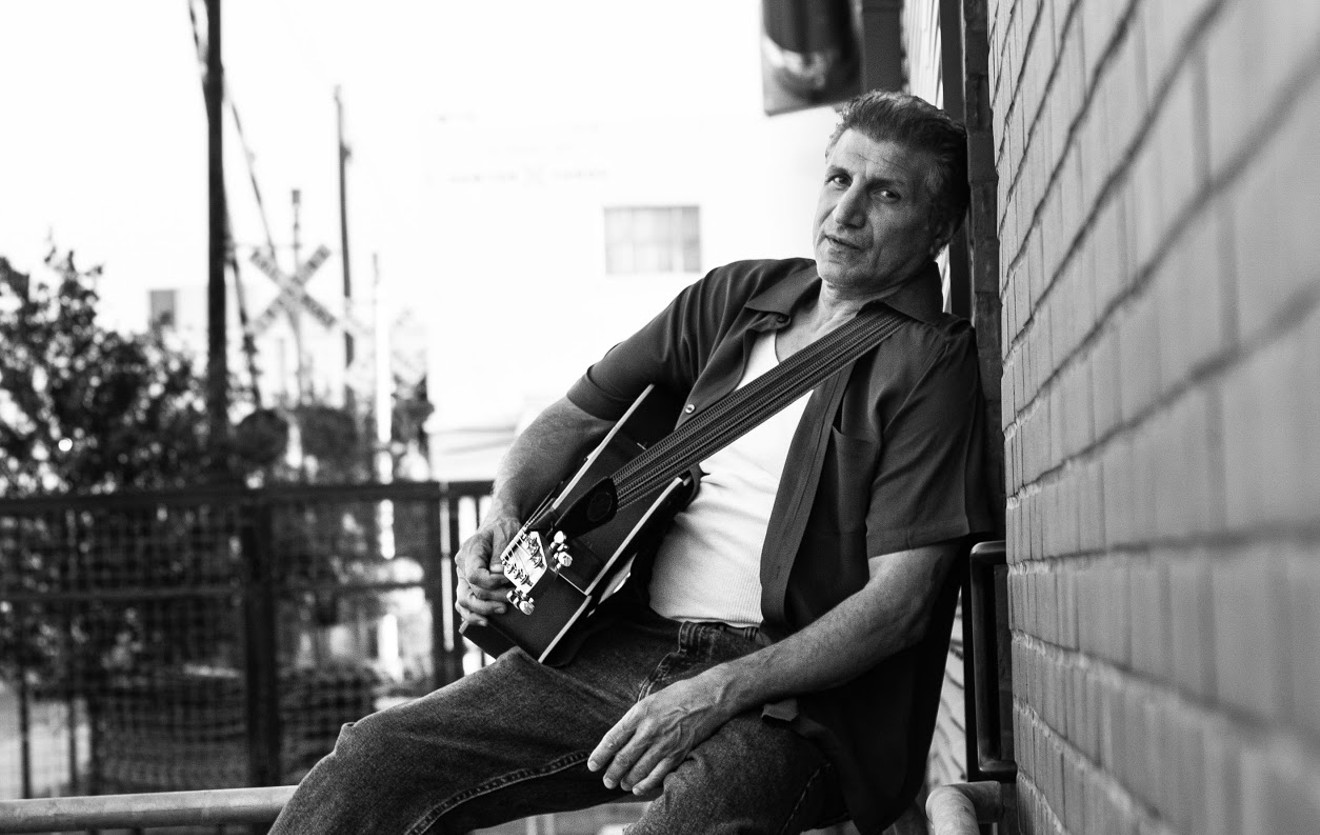 Tom Foti: From NJ/NY to H-Town Photo by Alexandra Ayres
The old adage goes you can’t judge a book by its cover, but that goes for records as well. Looking at Houston singer/songwriter Tom Foti on his new CD–chiseled Romanesque face, brawny frame covered in a white tank top, hair slicked back with gel – you’d think he was an enforcer for Tony Soprano, or ready to go 12 rounds with Rocky Balboa.

But listen to the 14 mostly original tracks on Through the Night, and Foti delivers an auditory shock. In a high, clear voice and accompanied only sparingly (but sprightly) by his acoustic guitar and harmonica – Foti sings mostly of love lost, never gained, or waiting for. Of both regret of the past and anticipation for the future in affairs of the heart. Like the guy in a dying relationship, waiting at home for his woman in “TV and Tears.” 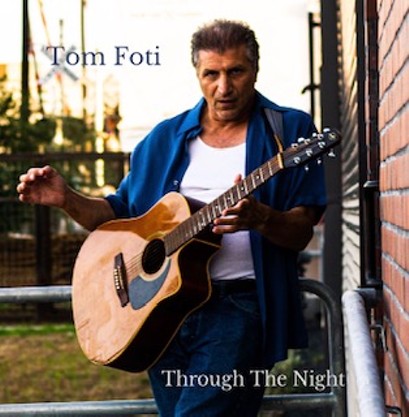 Record cover
“It’s a little delicate situation for me,” he explains of its inspiration. “When I was younger and in a band, I wasn't the most considerate guy in relationships. There was a girl who expressed her…discontent should we say, of the way I was treating her. And I let that register in me. I sang it here as if it was me being the victim, but it’s my understanding of what she was going through.”

Or the lonely man going through his day in an entirely rote fashion on “Ah Mr. Blue,” realizing when it’s time for bed it doesn't matter which side he sleeps on – because he’s alone. It’s his most personal song.

“I’m not a kid anymore and I never found the girl I was looking for. There are times when you…I can’t explain to you the pain. You can’t live like you [want to] because you feel that you’re not worth it. And you have this loneliness inside,” he says. “You have this [sadness] you don't even know how to address. And then you just close out the world. That song was a tough one to write. It wells up my emotions listening to it even today.”

But despite the hearts afire on songs like “Carmelita,” “What Can I Do,” “Hear Me,” “Chrystal,” and the title track, Foti also mines his personal life for humor. As in “The Only Guido in Houston,” a true life tale of the culture shock Foti felt when he moved to the Bayou City in 2010. He can’t wear a cowboy hat for far of smearing it with his hair gel; nobody talks with their hands here; Robert DeNiro and Al Pacino are replaced with Matthew McConaughey as film favorites; and the friggin’ mosquitoes? Fuggedaboudit.

“The ‘Guido’ is like a style of Italian-American. The gold chain with the shirt unbuttoned and the cologne and not a hair out of place. I was middle aged and moved half a continent away from everybody I knew and all the things I was accustomed to,” Foti says.

“I didn’t know anybody here. And the food? I used to love just going out Little Italy to get a cannoli and an espresso with the Sambuca. With the three coffee beans on top and the little lemon strip. Nobody does that here! And you can’t get a peppers and egg sandwich or good eggplant parmesan.”


Tom Foti certainly never planned on being a Houstonian. He grew up in East Orange, New Jersey, and counted the city of Newark and greater Essex County (ironically, the exact setting for The Sopranos) as his stomping grounds.

He got a guitar for his ninth birthday and his father – a mandolin player – showed him a few chords. But he couldn't fit his hand around the neck, and pretty much gave up on playing music until college at Seton Hall University when he invested in a few of those "Learn to Play Guitar" books.

Over the next few years, Foti took on a lot of different jobs: bartender, waiter, high school wrestling coach, and even selling time shares. He played bass in the Madcaps, gigging at famous New York City and Jersey Shore clubs like CBGB’s, the Stone Pony, the Bitter End, and Kenny’s Castaway. He moved to New York in 2004, playing in a group called The Band Next Door, before going solo with the record Anybody’s Guess.

In New York, he also appeared as an extra in “a bunch of TV shows and movies” and took his guitar to play for tips where the audience is close. Real close – as in the New York subway system.

“If you can play the subway, you can play anywhere,” Foti laughs. “Everybody’s had a rough day and nobody wants to hear you. So if you don’t do anything appealing to brighten their day, you’re risking your physical health! But it was very fulfilling.” 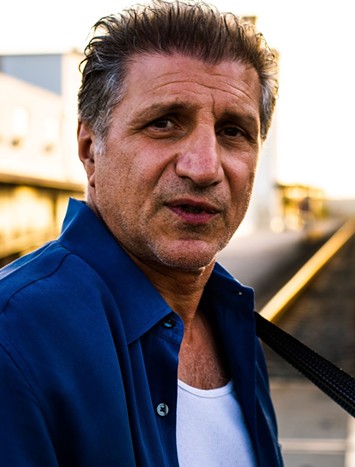 Tom Foti: In search of some great eggplant parmesan in Houston.
Photo by Alexandra Ayres
What brought him to Houston in 2010 was his daughter. She and her mother had moved here, and Foti didn’t want her to grow up without a dad nearby and part of her life. And though he continued different jobs to pay the rent (including a stint as a bartender at the now-closed Richmond Ave. institution Barry’s Pizza), he continued writing and playing music. Various shows on KPFT even spun some tunes from Anybody’s Guess.

He released Through the Night (co-produced with Tom Meeks) this past September, containing both songs he had in his bag from back in the East Coast as well as new material written in Houston (“Angels Abound” is about the helpers in Hurricane Harvey). The package features photos by Alexandra Ayres, and he’s shot a video with director Masaya Tamegai.

Foti began gigging wherever he could at local venues including the Tasting Room, the Hideaway, and, uh, three local locations of Potbelly’s Sandwich Shop (“I made sure I got a free sandwich each time. Turkey and swiss!” he laughs).

And as there’s no subway in Houston, his choice of unconventional places to play here included a Valero gas station on San Felipe, and by Yoyo’s Hot Dog cart, in an area which at least initially didn’t quite live up to his expectations.

“When I got here, I asked someone where Houston’s [version of] Greenwich Village was, where there were a lot of little clubs or a park where people just hung out and played music, then I was told to check out Rice Village,” Foti recalls. “It, uh, wasn’t exactly the same. But Yoyo’s always has really long lines, so I play for people waiting. And his hot dogs are great!”

As to what has surprised him most about Houston, it wasn’t so much the city as its residents. “I didn’t expect people to be nice!” he says. “In Jersey and New York, you have your defenses up 24/7. It took me a bit to realize that Texas people are not like that, and they’re generally trying not to take advantage of you. And when people say ‘Hello,’ they generally just mean ‘Hello!’”

Still, there’s one aspect of Houston that he is eagerly awaiting, something that that will come very, very soon – and it’s pretty universal among both natives and transplants.

“Around June and July, I start thinking about how much I can’t wait for the weather in November!” he laughs. “And it’s almost here!”

Through the Night is available at Cactus Music, 2110 Portsmouth Dr., and online via Amazon Music and Apple Music.
KEEP THE HOUSTON PRESS FREE... Since we started the Houston Press, it has been defined as the free, independent voice of Houston, and we'd like to keep it that way. With local media under siege, it's more important than ever for us to rally support behind funding our local journalism. You can help by participating in our "I Support" program, allowing us to keep offering readers access to our incisive coverage of local news, food and culture with no paywalls.
Make a one-time donation today for as little as $1.