Maisie Peters Photo by Lillie Eiger, courtesy of Elektra Music Group
Our chat with British pop sensation Maisie Peters begins by asking about influences. Not the music heroes who’ve helped send her from quaint pubs to a fully sold-out North American concert tour – including a March 18 stop in Houston at House of Blues – but the literary giants who may have helped shape her songwriting.

“I have a few favorites I love. Donna Tartt, I love The Secret History, it’s one of my favorite books, I think I’ve always been really inspired by her. And, I love The Great Gatsby, I sort of grew up reading it a lot,” said Peters the bookworm. “I think the way that F. Scott Fitzgerald writes is really interesting, it’s really poetic but it’s also really concise. It’s a really short book. It’s incredibly concise and full of poetry but also simultaneously actually very the opposite of flowery I would say, it gets to the point."

Peters favors "precision in emotion and in narrative” and her songwriting aims to strike that balance, the art of getting to the heart of the matter but doing it with the poetry the subject matter deserves. Acclaim for her debut album, 2021’s You Signed Up For This, suggests she’s accomplishing her mission. The record’s diary-style approach makes her coming-of-age songs relatable. Clash said it “might just be the perfect heartbreak album” and Billboard praised her “remarkable ability to toy with a melody.” Tellingly, People noted, “Maisie Peters says she wants to make ‘trying hard’ cool and we are totally here for it.”

On that note, we ask about trying hard to do it all. In addition to a burgeoning profile in pop music, Peters runs a book club on Instagram with more than 10,000 followers. 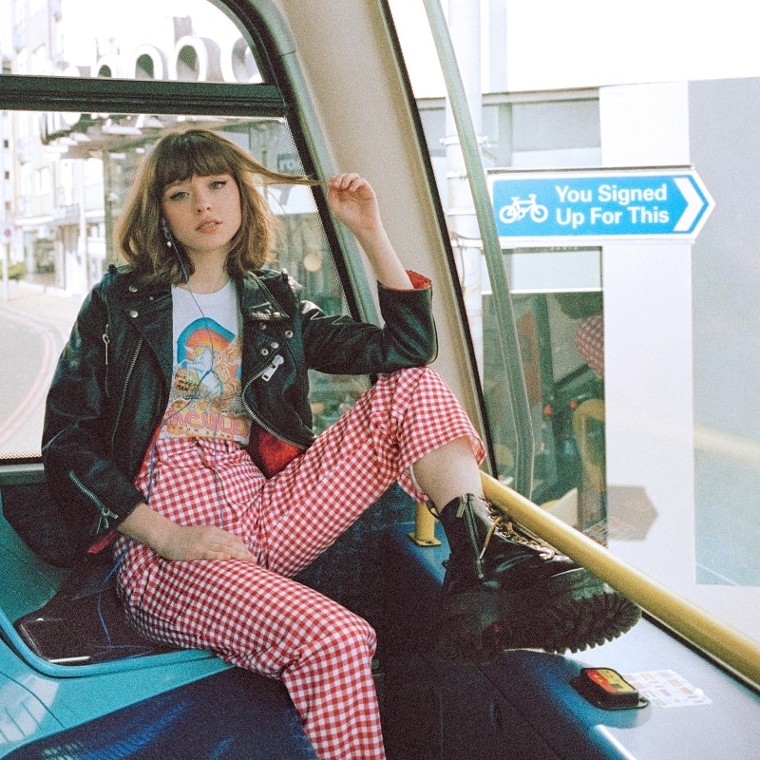 Peters' first LP released last fall to rave reviews.
Album cover art
“I think I’m always doing something,” she said of staying busy.” “I like the book club, it feels very different from the music. It’s actually hilariously not all about me which is kind of refreshing, but it’s also really interesting getting to be on the other side of the interview.”

Peters interacts with followers about her favorite reads and reads them for insight into the human condition, a pretty useful tool for writing songs that resonate with people. It’s just the latest, smartest way she’s engaged with listeners, a practice that dates back to busking on Brighton street corners and then amassing a big following via YouTube. She’s presently got nearly 200,000 subscribers there and “Psycho,” a hit single from You Signed Up For This, is closing in on 6 million views.

Was there an a-ha, this is happening moment, we wondered, some instance which made it overtly obvious her career had moved to a higher level?

“No, I don’t know if I can think of a certain moment,” she said, noting she’s seen it all as steady growth. “And, it’s sort of also come as a surprise. I don’t think that I ever set out to be a pop star, I think that I just loved music so much and songwriting and I loved performing, and I would play all these pubs where I lived and I was a busker and just sort of one thing led to another.”

We asked what from her busking background is helping to her now as she stands before teeming audiences in capacity-filled auditoriums everywhere.

“I think that when you busk you’re not owed an audience so it’s real interesting to channel that into performing even when people have bought the ticket and to make sure you’re doing everything you can to keep people looking and interested and enjoying themselves. I think that it makes you a sort of more attentive performer maybe because you’re more used to paying attention to people.”


As audience members we want that connection, whether in intimate concert settings or large rooms or even a cozy book club chat. We want to know that the artist is seeing us. This is something Peters truly understands, a bit of artistic wisdom she’s carried over from her time busking. Is there anything she misses about those specific types of performances?

“Busking is so scary. I did it a few months ago and it was honestly terrifying,” she admitted. “but, I guess I miss the spontaneity of it, I miss how you’re so entirely in control, you get to do whatever you want for two hours and I used to sing all sorts of things and it didn’t really feel like anyone cared, probably because they actually didn’t. So, there’s something kind of nice about playing when no one cares. Maybe. But, I don’t know,” she said and settled on, “Being a busker is the scariest of jobs.”

As for new things on the horizon, we notice she’s gone blond recently. What other new developments are imminent, we asked?

“I’m working on new music. I really want to put some more out as soon as possible. You know, I dyed my hair, I really have to follow it up with music, otherwise what’s the point?” she quipped. “I’ve got new music coming, shows, more tours. I’d like to come back a few places. But I guess music is the main focus right now.”

Peters strikes us as pretty fearless, a 21 year old who’s worked hard to get where she’s at in music; but, we do wonder which is scarier, going blond or coming to the States to play? Is it her first time here, we ask?

“I’ve been to the States before and I’ve not been blond before so I maybe have to say going blond is scarier,” she admitted. “I think everyone in my life thinks that I’ve become a more unhinged person because of it and I don’t entirely think that’s a lie, to be honest.”

One thing that’s maybe keeping her grounded is having the support of one of the world’s biggest pop stars. Peters is signed to Gingerbread Man Records, Ed Sheeran’s label, and she’ll be supporting Sheeran on tour dates in Europe this year. He’s obviously been in her shoes before, shoes that are taking mindful steps into the limelight. What have been the best bits of advice Sheeran’s imparted so far?

“Well, I had two key pieces of advice from him and I think both are equally important. The first is, when on tour, sort of stay clear of any alcohol brought forth with a little hat on it. It’s probably tequila and it will probably get me inappropriately wasted.

“The second piece of advice that’s slightly more appropriate,” she continued, “I think he’s always really encouraged to not define yourself by the highs or the lows of your career, of not basing your identity on one or the other.”

She said that’s allowed her to accept some disappointments and celebrate the highlights evenly. In a way, it’s really just a continuation of the steady approach to music Maisie Peters has already practiced to good results.

“I think that that is advice that I have found greatly useful,” she said.

Maisie Peters makes her Houston debut Friday, March 18, 2022 at House of Blues’ Bronze Peacock Room, 1204 Caroline. With Jonah Kagen. Doors at 7 p.m. for this all ages, standing room only show. $20.