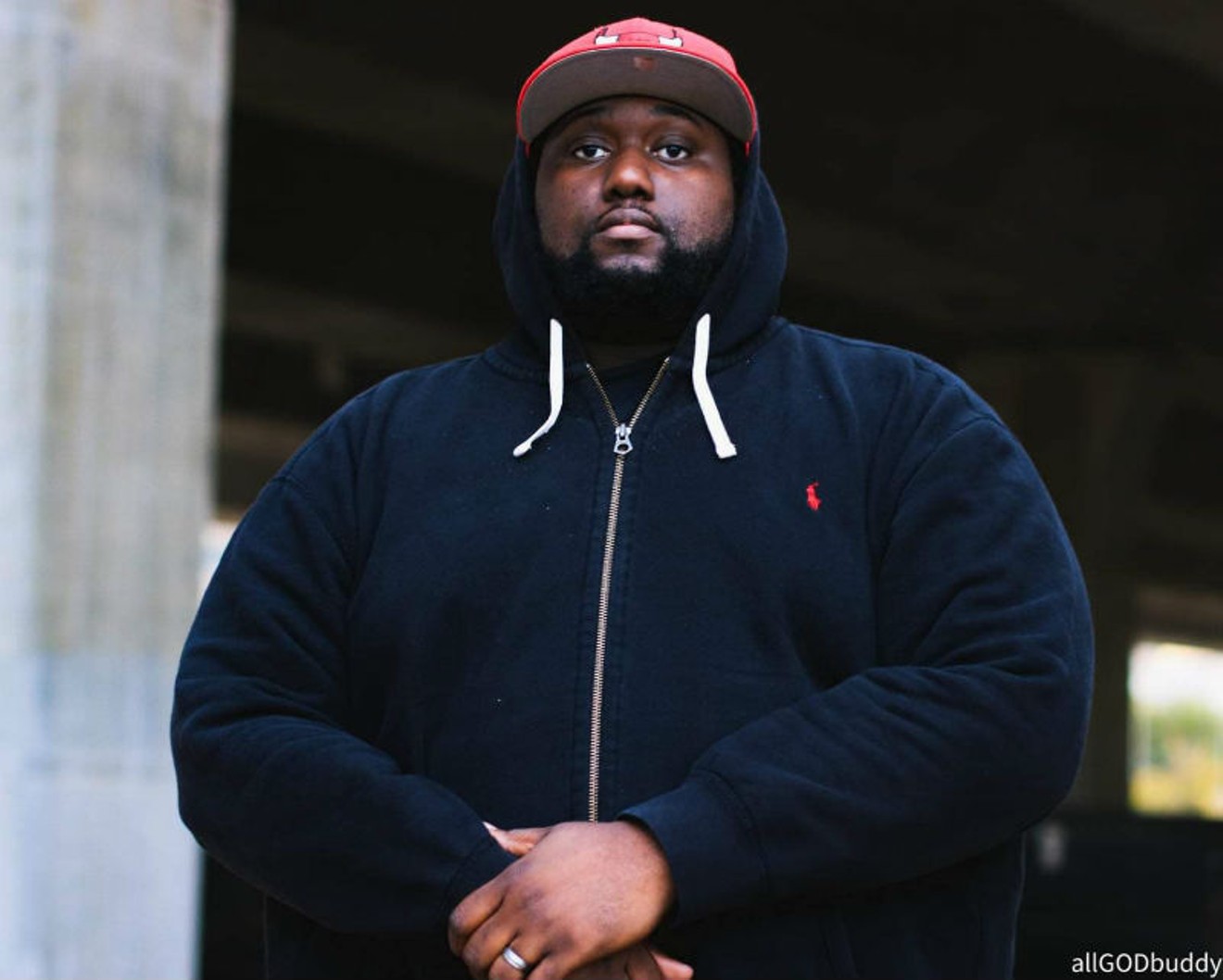 “I’m like the last word of mouth rapper left,” said Marcel P. Black, the Baton Rouge-based rapper who has helped make his city pivotal to burgeoning artists in the genre. “I don’t have a whole bunch of followers on Instagram or Twitter but for people who know Marcel P. Black, I pride myself about having a good spirit about myself that connects me with other people.”

Black is returning to Houston this week for the first time since January 2018 to reconnect with H-town’s rap fans. He’s the headliner on a Thursday night bill at Notsuoh, along with Dirty & Nasty, BLAZE X BLACK and Ill Will. He’s touring on a pair of superb 2019 albums, is entering the fourth season of a successful music showcase and is returning to start a second decade of making Houston fans with his socially conscious brand of hip-hop. For the uninitiated, we asked Black to describe what he does. We got two answers.

“The short answer is my name is Marcel P. Black and I make conscious rap for gang members,” he said with a laugh. “The long answer is Marcel P. Black, born in southern Oklahoma, I came to Baton Rouge in 2002 for college and I’ve been here for the most part ever since. Grew up in the church. My father was a gospel singer so he was my first influence as an artist.

"I’m a country boy, but I’m a true-blue hip-hop head,” he continued. “I’ve worked pretty intensively in the community here in Baton Rouge as a youth development worker, mental health counselor, teacher – now I teach a hip-hop and social justice class. I’ve done a lot of work primarily with young black males, youth development and basically being a youth advocate. That’s kind of my focus and it pretty much is reflected in my music.”

Black’s career has boomed over the last few years. In 2019, he performed in 23 states. As a D.I.Y artist, he booked those shows and the tours were self-funded, for the most part. On the phone, he is loquacious, engaging and is especially animated when discussing his latest work. The excitement is warranted, too. Last spring’s 4Tha CLTR and his latest effort, In Search of the Black Messiah, are filled with thought-provoking calls to action in the name of hip-hop and black culture.

Black’s living out those calls to action. In Baton Rouge, he’s developed a pivotal rap showcase. It’s called Fade the Flow and it’s held Sundays at the barber shop Black patronizes. It’s not just a rap showcase, it’s a community event and also has helped him develop a database of more than 400 hip-hop artists – musicians, producers, videographers, designers and more - who frequently call upon him to facilitate connections.

“Baton Rouge is really segregated. Certain places don’t really allow hip-hop. At one point, I was booking a show, it got cancelled because the owner came out and said he wanted rap music without black people. I’ve heard that sentiment echoed in a couple of different ways,” he said.

Black shared this news with his barber one day and the barber told Black he could host a showcase right there in the shop. That was June 2016 and Fade the Flow is now entering its fourth season of events. Last year’s anniversary show was sponsored by HipHopDX and featured the Brooklyn freestyle emcee Wordsworth.

“It’s become one of the most sought out showcases in the state,” he said. “We’ve had Dirty & Nasty there. We’ve had artists from Chicago, Minnesota, Atlanta, Miami, Virginia, North Carolina and of course, the South, people from all over the country are coming to a barber shop on a Sunday for a free show. We have free food, BYOB and we definitely try to break and premiere some of the best up-and-coming talent and give young artists a place to own their craft. And, at the same time, all my friends who are touring artists, it gives them a place to come, sell their merchandise, get them a little money, build a fan base.”

Black has built a fan base here in Houston, a place he says is rightly revered for its influence on rap culture.

“I grew up 30 miles north of the Texas border so we were very, very influenced by Texas rap. Of course, from Rap-A-Lot to the Geto Boys and things of that nature to screw. Screw in the ‘90s in my hometown was really big.

"I would hear songs about California and New York but I hadn’t been to those places," he continued. "So, the first time I actually heard a song and saw what the city looked like was in 1997 when I was riding through downtown Houston and 'Wanna Be a Baller' was playing on the radio. That was the first time I was able to actually see what I heard in the song. That’s my first real memory of a connection to Houston.”

Fast forward to 2011, when, at the behest of Purple Bastard, Black performed his first Houston show. Once here, he developed friendships and professional connections with rappers like Doughbeezy and Kyle Hubbard and found his way onto bills like Flyfest. Time passed and some of these artists chased their fortunes elsewhere, so Black hasn’t been to Houston in two years.

“It’s weird though, on both my Spotify and Bandcamp analytics Houston is one of the top three on both, in terms of digital downloads and streaming. So, somebody’s listening to my music out in Houston,” he said. “It’s been awhile but I’m really excited to come check in with people and have a good show.”

Last year’s albums will be at the heart of Black’s set. One thing you won’t see is Black rapping over vocal tracks, his latest crusade in his ongoing efforts to promote respect for rap culture.

“One of the reasons why the younger artists’ music is what it is is because people my age aren’t doing the job teaching that generation,” he said. He noted a song on the new album, “HHIAW,” which stands for “Hip Hop Is a Weapon.” Black said hip-hop mentors should promote the best part of rap culture so young artists will avoid missteps.

“For instance, Future has the song, ‘Mask Off,’ where the hook is ‘Percocet, Molly, Percocet.’ Well, the people who own Future’s record label have stocks in pharma. So, we’re dancing to drug abuse that’s sponsored by Big Pharma. Record labels have stocks in private prisons, so it’s no coincidence that they’re glorifying killing. Prison culture, black degradation is glorified in hip-hop music in ways that it’s not glorified in any other type of mainstream genre.”

Those lessons are why Black stays on the grind, leaving a loving wife and two children (who also love hip-hop music and are featured on the new album) for long stretches on the road. In Search of the Black Messiah’s songs aren’t just bangers, they have purpose. He not only sees them at play when he’s working with young people in Baton Rouge, but those young people inspire his work. A song like “Black God Fresh” espouses black joy and promotes self-esteem. The title track reminds listeners of the government’s systematic oppression of blacks as detailed by J. Edgar Hoover’s own talking points. There's even a song ("Shake Back") about the importance of healthy eating to avoid diabetes and other ailments. Black's combined his life growing up in the church with the pertinence of his favorite conscious rappers to create a mission for himself.

“Listening to conscious rap really informed me, it kind of gave me an identity for who I wanted to be,” said Black. “Right now, everything is based on what I can do for God and other people, right? My music is never crass – it might be a little profane, but never crass – and conscious hip-hop is an extension of my father being a gospel singer working in the community. Conscious hip-hop is my ministry.”

Marcel P. Black makes his long-awaited return to Houston Thursday, February 13 at Notsuoh, 314 Main. With Dirty & Nasty, BLAZE X BLACK and Ill Will. Doors at 8 p.m., $10.
KEEP THE HOUSTON PRESS FREE... Since we started the Houston Press, it has been defined as the free, independent voice of Houston, and we'd like to keep it that way. With local media under siege, it's more important than ever for us to rally support behind funding our local journalism. You can help by participating in our "I Support" program, allowing us to keep offering readers access to our incisive coverage of local news, food and culture with no paywalls.
Make a one-time donation today for as little as $1.