Me First and the Gimme Gimmes Photo by Ryan Bakerink, courtesy of Fat Wreck Chords
What’s it like to be the lead singer of the best cover band in the world?

This is an actual question we pose to Spike Slawson who, in our humble estimation, holds that very honor. Slawson is the lead vocalist for Me First and the Gimme Gimmes, which brings its inspired punk rock takes on popular songs to Houston this week. The band is touring with Flogging Molly, Violent Femmes and THICK this fall and the run makes a stop here Wednesday night at Bayou Music Center.

Slawson’s short answer was a chuckle and a polite “Thank you.” He instead offered some insight into how and why the Gimmes, as they are affectionately known, have successfully churned out new records and played world over since the late 1990s, all without original songs.


Until recently, anyhow. As with every other touring band on the planet, the Gimmes were forced off the road by the pandemic. Slawson said these are the first shows they’ve played since Christmas 2019.

“It is very strange. Like there’s very definitely some trepidation but it’s sort of a two-fold thing — not only do I want to do it because I want to play live, but I want to do it because I feel like people want to have a good time,” he said. “Although things feel like they might be similar to the way we felt in April of 2020, I feel like, at this point, the powers that be want live music to happen, too. They obviously want it to happen responsibly and safely, but people need some kind of outlet right now. It feels like we’re in kind of a darker place than we were even in April of 2020.”


If there’s ever been a band that could shine some lightheartedness into the shadows, it’s Me First and the Gimme Gimmes. For one, they’re a supergroup in every sense of the word. Their recording band includes Slawson, the front man for Re-Volts, NOFX’s Fat Mike, Foo Fighters’ Chris Shiflett and Joey Cape and Dave Raun of Lagwagon. The band’s touring members have featured friends from various groups including Bad Religion, Face to Face and Bad Cop/Bad Cop. For the current run, Slawson is joined by John Reis (Rocket From the Crypt), Jonny “Two Bags” Wickersham (Social Distortion), CJ Ramone (Ramones) and Pinch, a.k.a. Andrew Pinching (The English Dogs/The Damned).

No matter who’s on board, the Gimmes pour punk fuel into stalled popular songs from a broad swath of genres. Their takes on timeworn tunes by non-punk acts like John Denver, James Taylor, Celine Dion and Rodgers and Hammerstein give standards/classics some get up and go. Their rendition of “I Believe I Can Fly” soars past the original. Their wild take on “Hava Nagila” was recorded live at an actual bar mitzvah for the album Me First and the Gimme Gimmes Ruin Jonny’s Bar Mitzvah. Their interpretation of Loggins and Messina’s “Danny’s Song” — the opening track on the Gimmes’ first album from 1997 — is one of the best cover songs ever recorded, we’d say.

So yes, we’re ready for the band to bring its invigorating set to us live and in person. Slawson’s excited, too, especially about the Gimmes’ tour mates. We note that they are attached to different labels and offer different musical vibes. He likened it to a European bill, smartly drawing from different pools. Not only does it mean a more interesting night of entertainment for the audience, he said, it offers a chance to grow the crowd’s musical interests. If there’s a mission to the Gimmes brand, this is it.

“I think people, especially people in the punk community, need to open themselves up to different kinds of music,” Slawson said.

Case in point, he tells us about a different project he’s attached to and what it shares in common with the Gimmes.


“I did a show with (Adolescents’) Steve Soto, may he rest in peace, down in Panama City and I stayed in touch with the guy that promoted the show and organized the show and he actually is, as it turned out, an accomplished drummer in his own right. He and I talked about forming a boleros cover band, which has been a dream of mine for something like 20 years, since the first time somebody turned me onto Los Panchos.

“For some people, that’s like Elvis Presley,” he continued. “For some Mexican and Central American grandmas, Los Panchos and Los Diamantes and all those sort of classic trios from the middle of the 20th century, that was as big as The Beatles.”

Slawson delved deep into this very specific genre of music, discovering more bands, learning the meanings of the songs’ lyrics and finding musicians who’ve worked with artists like Ruben Blades and Sech to create Los Nuevos Bajos, “which means ‘The New Lows,’ in Spanish,” he said. “We were able to release a 7-inch record on our friend’s label here in San Francisco which is called Del Corazón Records. It’s got two songs on it. Post-punk is maybe too broad of a category to describe it, that doesn’t really tell you what it sounds like. Maybe like The Blasters if they were in the jungle.

“It’s still all covers but it’s all these old boleros that I learned from these classic groups like Los Tecolines and Los Tres Ases. We recorded a bunch of stuff but so far I’ve only released two songs.”

“I love these songs. I hope some of the energy that I heard in these songs come through,” he added. “Someone described it best, in fact a Panamanian dude, he said man, there was never a bolero written about the middle of a relationship. It’s always the very beginning or the very end of a relationship. I thought, man, that’s absolutely right. But the pathos and the humanity and the love in those songs, the pure emotion. If you know a little bit of Spanish then the effect is even more devastating. They’re such beautiful songs.”

The further beauty of those songs is they can be shared from generation to generation. He said presenting cover songs with a fresh spin makes that possible. 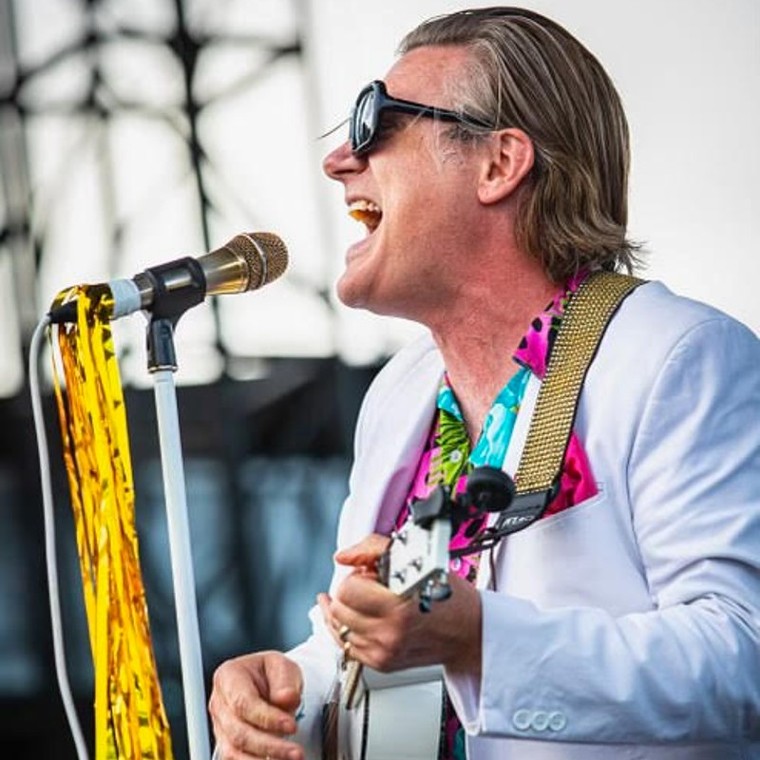 Slawson leads the touring Gimmes on the road this fall.
Photo by Wes Orshoski, courtesy of Fat Wreck Chords

“Not to try to be too self-aware but part of the chemistry of the Gimmes Gimmes was the parents or grandparents communing with their kids like, ‘Oh, damn, I know this song. Why are you listening to this song?’"

We ask if there’s any common denominator to the songs the band covers.

“My lack of respect, as odious as that might sound,” Slawson said. “I don’t know if this is going to read well, but for the Gimmes stuff, it almost seems like the music, if I didn’t actually like it, it was going to have a better chance of being a good song and connecting.

“Like Mike and Joey love Neil Diamond. For me, there are a few layers of irony attached to loving Neil Diamond, like a self-conscious irony, as cunty as that sounds maybe,” he said. “Like John Denver was never my thing and I feel like that’s part of the reason why maybe it worked. If somebody were to say why don’t you guys do a Kinks record or a couple of Kinks song? Nope. I would never do it, because I love the Kinks too much and I want them to have the final word.”

Slawson said there’s no new Gimmes record in the foreseeable future. But any parents of “tween” Latinx girls should consider the band as an entertainment option for a big future birthday celebration.

“This might be getting a little flaky and metaphysical but I feel like records are events that resonate into time in ways that have nothing to do with the sounds and the signals that are being recorded, or only peripherally have to do with that. Like something happened and that event resonates through time and through speakers and headphones and only builds over time if it’s a good record,” he said. “In that vein, I feel like Jonny’s Bar Mitzvah was one of the most successful records that we did because it was an actual event.


“We did play the set two times in a row, much to the dismay of the people actually attending the event,” he continued with a laugh. “Luckily, they served mug-sized glasses of wine, so by the second set people were a little bit more primed to deal with us, to endure us, I will say. I would like to do more events like that. My idea has always been to play a quinceañera party somewhere in southern California, in San Diego County or Orange County. I just think it would be really fun and it would also have that same sort of cross-cultural tension that a lot of songs themselves have.”

We are already smiling at the thought of adding the Gimmes’ unhinged versions of “Las Mañanitas” and “Bidi Bidi Bom Bom” to our party playlists. Until then, we’re happy to see them live. Slawson hopes the band’s tour will not be derailed by the virus.

“The one thing that I’ll remember fondly, strangely enough, about April 2020 is that there seemed to be this sense that we were all in this together. And I know that that honeymoon period never left for very long but I’m hoping that people can tap into that and just show a little consideration for one another,” he said. “I really hope and I pray too, as an agnostic I’m still praying to whatever’s up there, that we get to do it and we get to finish it.”

Me First and the Gimme Gimmes, with Flogging Molly, Violent Femmes and THICK, Wednesday, October 6, 2021 at Bayou Music Center, 520 Texas. Doors at 6 p.m. for this all ages event. This show is requiring all fans to provide printed proof of a negative COVID-19 test within 72 hours of the event or full vaccination for entry. $45 to $99.50.
KEEP THE HOUSTON PRESS FREE... Since we started the Houston Press, it has been defined as the free, independent voice of Houston, and we'd like to keep it that way. With local media under siege, it's more important than ever for us to rally support behind funding our local journalism. You can help by participating in our "I Support" program, allowing us to keep offering readers access to our incisive coverage of local news, food and culture with no paywalls.
Make a one-time donation today for as little as $1.