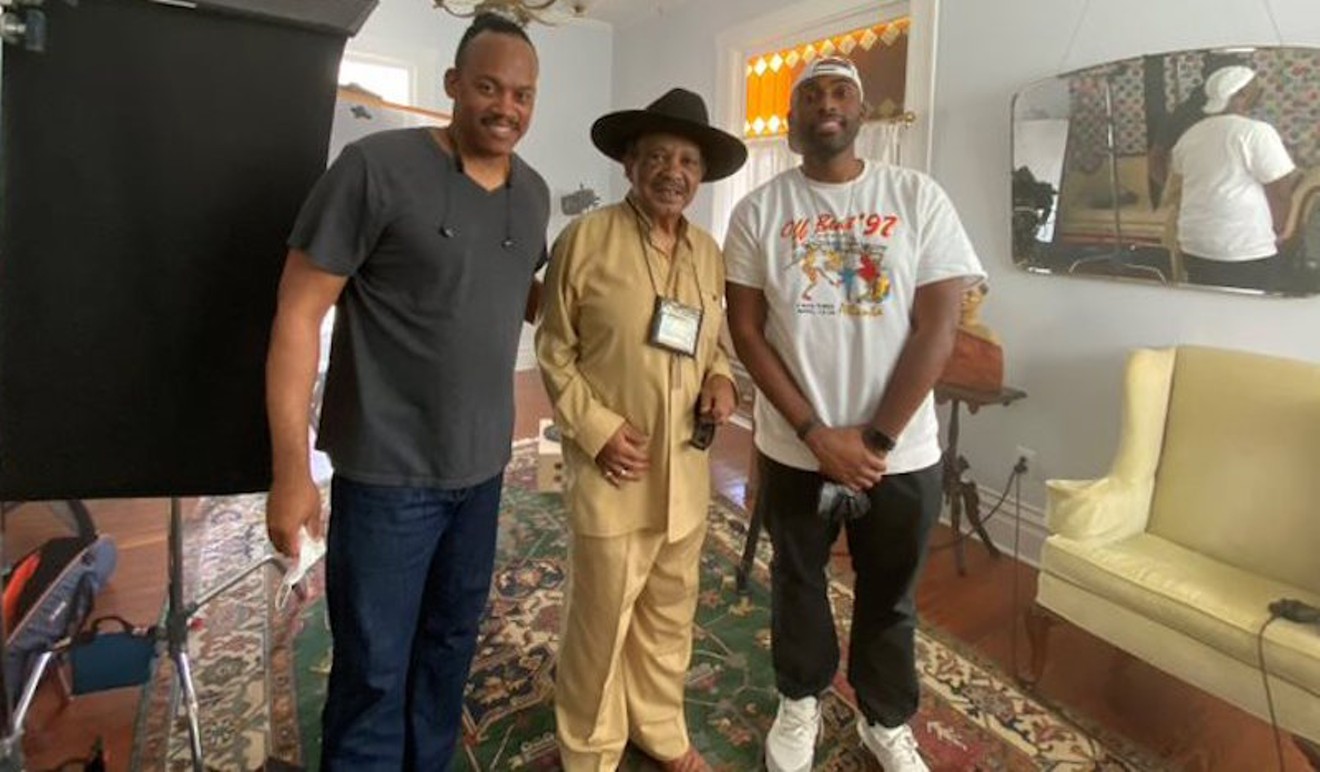 Acclaimed musician Archie Bell, Founding Member of the R&B group Archie Bell & the Drells, with film director Isaac Yowman (right) and producer Greg Carter (left) on set for the filming of Memory Builds the Monument documentary. Photo By Miriam Heads for IYO Visuals
Last September the State of Texas officially honored Houston’s Fifth Ward by designating it as a Cultural Arts District, making Houston the city with the most Cultural Arts districts with a total of seven neighborhoods.

“This area down Lyons that is just known for its history and heritage,” says Harrison Guy Director of Arts & Culture of the Fifth Ward Cultural Arts District. “At one point it was just a thriving heartbeat of the community, now it's been designated as a cultural arts district to remember those historical aspects of it, to pay homage to those things and to figure out how we can breathe new life into those things as well.”

The first showing will take place on Saturday, August 28 at the Moonstruck Drive In located right there in Fifth Ward. The screening will include pre-recorded panel discussions and performances as well as food and drinks that will be available for purchase at the drive in.

The event is free to attend but attendees must register online.  There will be two screenings, one at 8 p.m. and another at 10 p.m. The organizers of the event plan to host additional screenings in the future and possibly add the film to the tours of the DeLuxe Theater also in Fifth Ward.

They have also submitted the film to various film competitions in hopes of garnering interest and one day completing a full length version of the documentary.

“We wanted this project to be people-centered and community-centered and not just be a film that you just show, but also to just truly bring in the people because that's where the memories are and so alongside the film we have been doing a really big effort to do community engagement,” says Guy adding, “You can't tell this story without talking to people.”

“I had no knowledge of Club Matinee before this project, says director Yowman who credits visual artist and executive producer of the film Mel Chin with suggesting the venue as a subject.

“It was enlightening. It made me more proud to be doing the work that we are doing in this community as a team and with my company IYO. It was like a full circle moment, it came to a point where it became a labor of love. We just want to do as much as we can with the resources we have and any relationships cause I want to try to tell this story to the best of our ability with the amount of time that we have. I’m so excited for the world to see this,” adds Yowman.

The film kicks off with Aretha Franklin’s “Chain Of Fools” as The Queen of Soul performed there herself along with many other greats like James Brown, Archie Bell and Ray Charles, who met his wife there.

“Back when I was in high school all the entertainers whenever they came to town they always ended up in the Matinee, whether they're just there performing or they just having a meal. It was a central location for everybody no matter where the artists was working,” says Archie Bell when reminiscing about the venue.

Bell describes sneaking in as a teenager with a drawn on mustache only to be kicked out halfway through his cocktail. Later on of course he was invited back in as a performer and frequently visited Club Matinee to perform and as a patron.

Memory Builds The Monument features interviews with active members of the community describing the bustling and prosperous area around Lyons Avenue including the KCOH Radio station which broadcasted live from Club Matinee daily.

Fifth Ward at the time, including Club Matinee, was one of the few places in the South where African Americans could engage comfortably without the limits of segregation. The film also touches on the complex issues which shifted the dynamic of the area, including integration and the construction of highways which cut through the neighborhood.

“Everything moved out the Fifth Ward. After they all moved business, the matinee closed down too,” says Bell who experienced the sea change of integration firsthand.

“As young people if we don't collect the memories of our elders and understand our history sometimes we unfortunately erase the history by not understanding and knowing. This was an educational piece for me, it was a philanthropy, a humanitarian, it was a connection on so many different levels,” describes Yowman.

“As young people if we don't collect the memories of our elders and understand our history sometimes we unfortunately erase the history."

Houston’s Fifth Ward is bubbling over with important history. It was there at the DeLuxe Theater, which still stands, that the first ever integrated art show was held. The event will be celebrated next month to mark 50 years since it happened.
The infamous Don Robey’s Peacock Records was also located in the Fifth Ward and was where Big Mama Thornton, who also performed at Club Matinee, recorded the original version of “Hound Dog” a song later made famous by and mostly associated with Elvis.

KCOH, which continues to run in the Third Ward off Almeda, is the oldest radio station in Texas. Yowman describes his own disbelief in not knowing the important history in his own backyard.

“If I passed that and didn't know then there’s for sure a demographic that's under me that passed KCOH and has no clue what it is and how much rich art history it has. For it to be around still to this day is such an honor and a blessing and we should treat it like the legacy that it is. That's my bigger hope, for people to see this.”

Memory Builds The Monument will be screened on Saturday, August 28 at The Moonstruck Drive-In, 100 Bringhurst, 8 p.m. and 10 p.m. screenings, Free, Attendees must register online.
KEEP THE HOUSTON PRESS FREE... Since we started the Houston Press, it has been defined as the free, independent voice of Houston, and we'd like to keep it that way. With local media under siege, it's more important than ever for us to rally support behind funding our local journalism. You can help by participating in our "I Support" program, allowing us to keep offering readers access to our incisive coverage of local news, food and culture with no paywalls.
Make a one-time donation today for as little as $1.