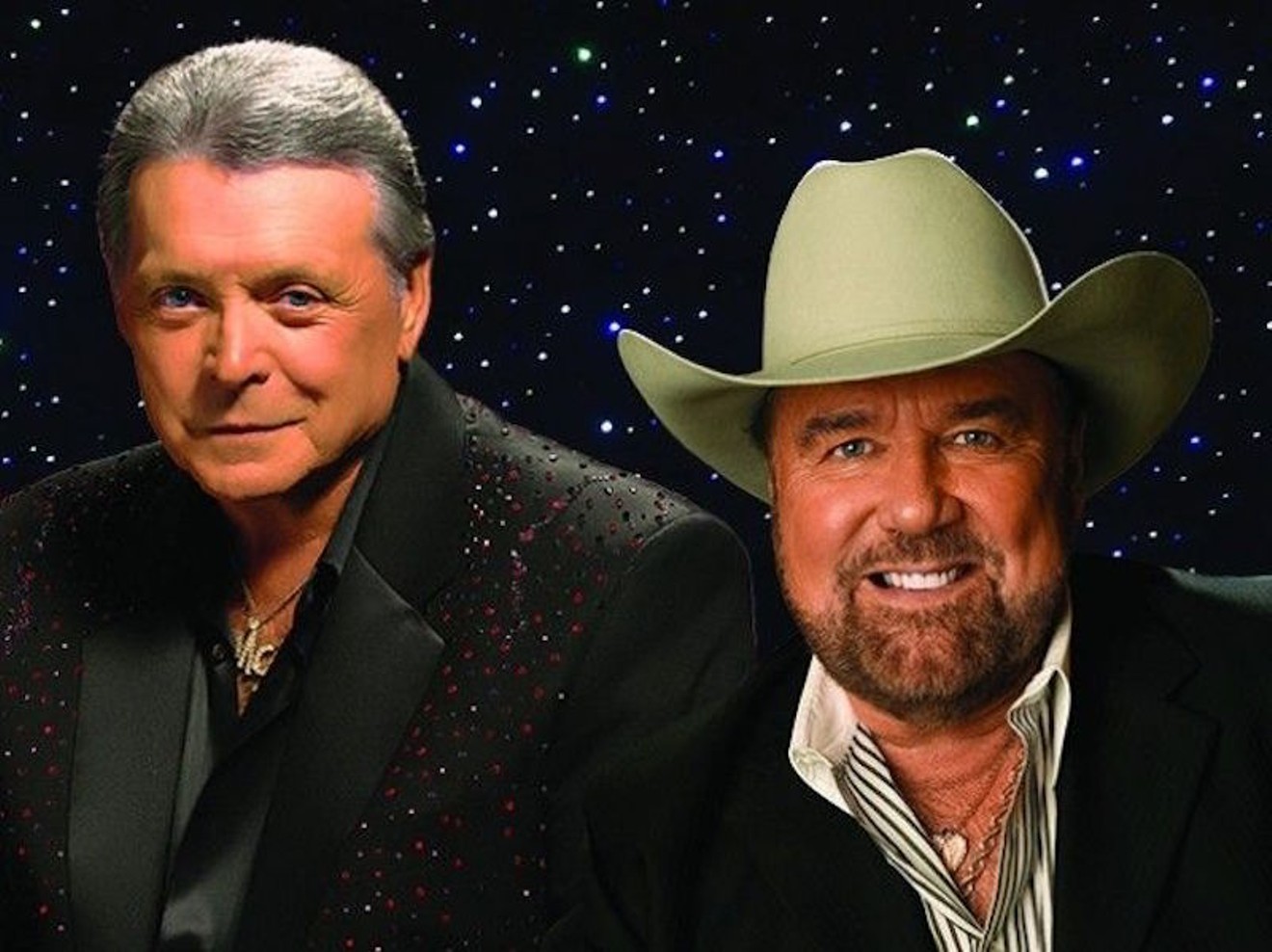 Texas legends Mickey Gilley and Johnny Lee pick up their Urban Cowboy Reunion tour with a stop at The Dosey Doe in the Woodlands on Tuesday, July 13. Photo By Zach Farnum
It is impossible to separate Country music legend Mickey Gilley from the hit film Urban Cowboy, which celebrated its fortieth anniversary last year. To celebrate the occasion, Gilley and his fellow Texas legend Johnny Lee set off to embark on another Urban Cowboy Reunion tour, except this one was cut short due to pandemic.

Gilley and Lee are on the road again and will be performing at the Dosey Doe on Tuesday, July 13 for a special evening of performances and storytelling hosted by Kyle Hutton as part of his Real Life Real Music series broadcasted from the small Woodlands stage.

“Can you believe it's lasted that long?” asks Gilley of the continued draw of the iconic film and what can only be described as an entire movement that continues to inspire boot loving youngsters to this day. “I can’t believe that the music has held up like it has.”

Gilley describes the outpouring of interest and large audiences that have been a part of this tour spanning four years, only wishing the two could have tapped some other Urban Cowboy talent for the shows, many of whom they simply could not afford or house on the small stages they play across the country.

“It’s a very small stage,” says Gilley of the beautiful set up at The Dosey Doe Big Barn, a 165-year-old tobacco farm which was brought over from Kentucky 15 years ago. “I’ve got a seven piece band so it makes it kind of crowded for us but we've managed to do the performance without a problem.”

Gilley will be backed by his Urban Cowboy Band and an Urbanette back up singer. He credits his keyboardist, Lee Hendrix with helping him achieve his goal onstage to replicate his studio sound, despite no longer being able to play piano himself.

“I’ve been very fortunate. My body went south and I was getting ready to retire until I found the guy that plays the piano for me and he plays the keyboard really, really close to my style of playing.”

Gilley met Hendrix during a performance in Oklahoma five years ago where Hendrix backed all three performers that night and blew Gilley away with his ability to play in the same way he used to play, rejuvenating Gilley’s interest in continuing to tour.

“Low and behold I found a guy that plays the piano probably as good, if not better than what I played. I try to make the music sound like the recordings and as long as I've got him with me, I'm going to continue to work.”

“I talk about my life in music,” he adds. “I started back in 1957 and I tell folks a little bit about the fact that I’ve been in the business for many, many years. I’m 85 now,” says Gilley proudly.

This past year was the longest he had ever been off the road, even when he suffered an accident which left him temporarily paralyzed in 2009, he only took four months off. His injury continues to cause him trouble as Gilley describes the difficulty he has walking and standing upright.

He has had a year filled with ups and downs, including losing his second wife and marrying his new bride six months later, whom he credits with helping him get back on the road as she does “a little bit of everything.”

“I can’t believe that she married an old man like me. I was surprised she said yes. There’s a twenty-one year difference in our age but we have a lot in common. We like the same things and she's been good for me.”

Gilley is hopeful that an experimental stem cell treatment he is trying on his back will improve his mobility and overall quality of life but despite the challenge of a bad back, he cannot wait to get back out in front of audiences and do what he does best.

“I don't have the stamina that I used to have but at 85, it's been a great ride. I don't walk around feeling sorry for myself because I see a lot of people that are in a lot worse shape than me so I just take every day like it’s going to be my last cause one of these days I know I'm going to be right.”

“It’s always nice to be back working again. You get tired of sitting around doing nothing and I've always liked to work. It's not about the money, to me it's about the music. People ask me why I don't retire, I could retire but I still enjoy the music and I enjoy the camaraderie I have with the audience so as long as they keep coming to see the old man, I'm going to continue to do the songs that brought me to do the dance.”

Gilley was born in Mississippi and raised in Louisiana. He learned how to play piano from his famous cousin, Jerry Lee Lewis. He moved to Houston back in the ‘50s and recalls his days in town pre-Gilley's fame.

“I can remember when we only had the Gulf Freeway as the main freeway system in Houston and now we've got Beltway 8, the 610 and everything around Houston now that's made it completely different. I don't even recognize some of the places. I used to deliver things in a bobtail truck and I knew the city pretty good but forget about it now, I have to use a GPS to go where I want to go.”

Gilley was gaining fans and growing his career when he decided to open his own nightclub in Pasadena and the rest is history. The music, stories, photographs, fashion and of course the film, all contributed to Gilley’s success, growing his audiences steadily through the ‘70s and ‘80s.

Though the original Gilley’s shut down in 1989, the name lives on with clubs in Dallas, Las Vegas and Oklahoma. Gilley opened up his own theater in Branson, Missouri where he performed almost every night of the week until he sold it three years ago. Though he still owns a home in Pasadena, which he plans to put on the market soon, Gilley lives in Branson and he and Lee still return to play his old theater for short runs in the spring and fall.

Since it’s closing, there has always been excited chatter surrounding rumors around town that Gilley’s would be reincarnated in Pasadena one day, but despite years of talks about re-opening, Gilley doesn’t foresee that happening.

“It never come about because the wrong people had the rights to it. I kept waiting for them to make it happen and it didn't happen so I doubt seriously there will ever be another place in Pasadena with Gilley’s on it unless somebody come along that wants to do it and do it the right way. I told them the only way to make it work would be to duplicate what we had before and I don't know if anybody wants to try to do that because it costs a lot of money to do it.”

Even without his famous club, Gilley has consistently used his voice and talent to stay on the fresh and connected to his audiences.  His ability to take R&B songs and make them his own, along with his original songs have helped sustain his long career.

Though Gilley has 17 No. 1 songs to choose from and many more hits, he is quick to pick a favorite citing his country rendition of the Sam Cooke hit “Bring It On Home To Me” as what he considers his best recording from the ‘70s.

“I just sat at the piano and worked out an arrangement on it,” says Gilley of the surprising ability of the song to cross over into a different genre. “I played it for the producer and he liked it and so we made a run at it. It came out and I thought it sounded awesome. I recorded quite a few songs that I thought were good but nothing I felt like as good as the quality of “Bring It On Home” cause that just turned out to be a good recording for me.”

These days Gilley admits that he doesn’t get too into new country music, instead he tunes into Willie’s Roadhouse on Sirius XM on a regular basis to hear his old favorites and friends.

“People ask me how I feel about it,” he says about new country music. “I tell them anytime any artist can go out and fill a football stadium up, they're doing something right so I don’t put anybody down for what they do. I just don't understand that kind of music and it's not my cup of tea, but they can fill a football stadium up and I can't do that, and Johnny Lee can't do that but it’s been a good ride for us.”

Mickey Gilley and Johnny Lee will perform on Tuesday, July 13 at The Dosey Doe,25911 Interstate 45, doors at 6:00 p.m., $108-158, ticket price includes three course meal.
KEEP THE HOUSTON PRESS FREE... Since we started the Houston Press, it has been defined as the free, independent voice of Houston, and we'd like to keep it that way. With local media under siege, it's more important than ever for us to rally support behind funding our local journalism. You can help by participating in our "I Support" program, allowing us to keep offering readers access to our incisive coverage of local news, food and culture with no paywalls.
Make a one-time donation today for as little as $1.