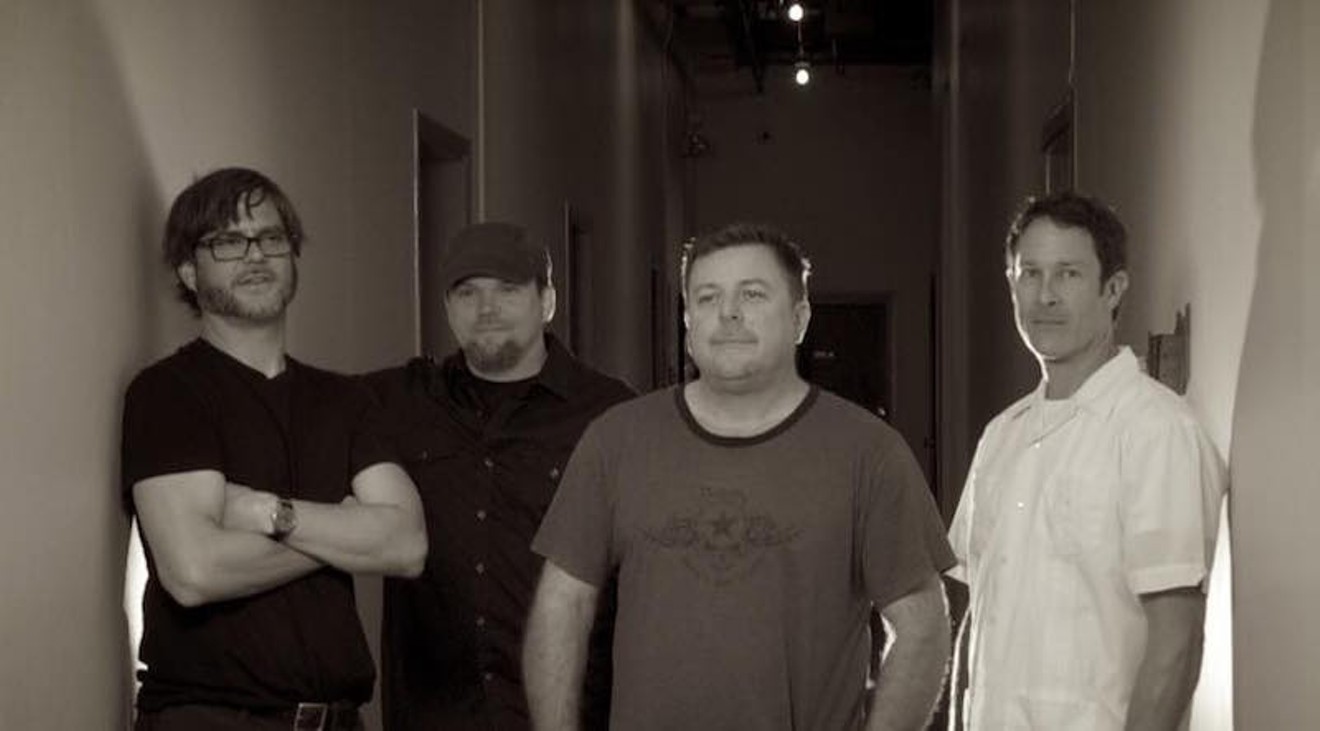 Moses Guest will perform at the Heights Theater November 1 to celebrate the release of their new single, "All Night Brother." Photo By Steve Harris
Moses Guest made a name for themselves in Houston and beyond, as a fun lovin’ jam band in the late ‘90s and early 2000s. Like most jam bands, their fan base is large, loyal and down for a good time. Their powerful live shows earned the group multiple Houston Press Music Awards and nominations from 2001-2003.

The band will once again reunite to play the Heights Theater on November 1, marking their first time on one of Houston's finest stages. They will be celebrating their new single, “All Night Brother” and plan to treat fans to “classic” Moses Guest songs as well new songs the band is currently working on in the studio. The show will open with young Houston artist, Sarah Grace, who some might recognize from season 15 of The Voice.

Moses Guest took some time off the local scene when vocalist and guitarist Graham Guest decided to relocate from Houston to Scotland. They returned in 2017 with the release of their first album in ten years, Light, which was met with high praise. The band has continued to play together every few months with Guest traveling from his current home in Idaho.

“We all needed to take a few years off from traveling, recording and to some extent to each other, even though we never had a tempestuous brotherhood of any sorts, we all got along pretty well, “ says Graham Guest.

When Graham Guest returned to the United States, the band decided to keep the ball rolling and he made the effort to travel to Houston every few months for local shows as well as maintaining their tour circuits around the country. “Slowly but surely we have been deciding to ramp it up more and more.”

Their new single, “All Night Brother,” out November 1, shows the band's ability to hold onto that southern rock, jam band sound while pushing into a new, more concise direction.  Graham Guest admits they are all in a more mature place after 20 years of playing together. “It just shows in the music; it’s really clean and tight, and everyone’s mind is clear.”

Moses Guest has held onto its original line up, despite the geographical hurdles. “It’s just a good feeling to still be with the same guys after 20-plus years, I’m really grateful for all that, just to have something that seems like a brotherhood. I don’t see how it could be much different than a brother in your family, we usually get along, sometimes we don’t but we always work it out and we love each other a lot,” Graham Guest says.

With this new single, the band is working on a new album featuring live tracks from the vault and new songs they have been working on. “There are some changes,” says Graham Guest.  Though Moses Guest was quickly lumped into the jam band category, they have always been more than that with their rich lyrical content.

Graham Guest admits that the group is embracing their new direction. “We are kind of rebranding as we move into this next phase of our lives and age group and just really musically. I think we’re feeling Americana-ish, we have been making this joke that we are more Jamericana.”

When asked to put into words this new genre he describes it as, “Coming out of Country through the Americana tradition with the acoustic and lyrical influence, and dropping in some improv influences from jazz and jam rock.”

Moses Guest is not only revving up in the studio but also plan to be out on the road more often.  “Obviously we are going to keep playing Houston, it’s our home base, we’ve got a lot of friends and fans and that’s always going to happen and I hope we get enough people in the Heights Theater that we get to come back there.”

Moses Guest will perform with Sarah Grace Friday, November 1 at The Heights Theater, 339 W. 19th. Doors open at 7 p.m. $28.
KEEP THE HOUSTON PRESS FREE... Since we started the Houston Press, it has been defined as the free, independent voice of Houston, and we'd like to keep it that way. With local media under siege, it's more important than ever for us to rally support behind funding our local journalism. You can help by participating in our "I Support" program, allowing us to keep offering readers access to our incisive coverage of local news, food and culture with no paywalls.
Make a one-time donation today for as little as $1.