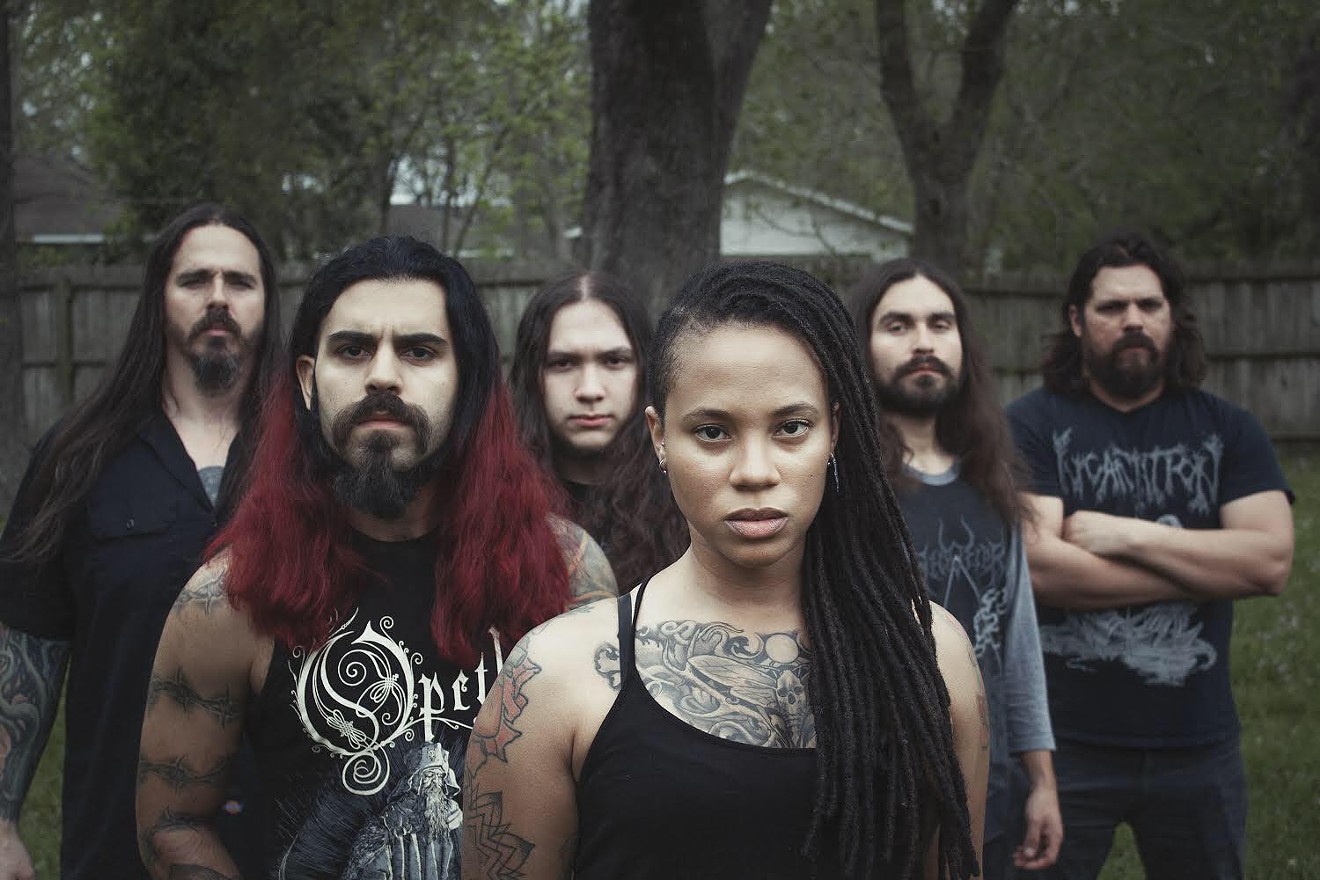 When local metal heroes Oceans of Slumber hit the stage at White Oak Music Hall this Saturday, catch them while you can. In less than a month, they’ll be back on a plane over the Atlantic. The band will embark on its second European tour this year—a string of headline dates bookended by big festivals in Germany, Hungary and Czechia where they’ll share a stage with the likes of Parkway Drive, King Diamond, Anthrax, Meshuggah and roughly a zillion more of the world’s most in-demand heavy acts.

The trek begins in front of tens of thousands of people at an 18th Century fortress in the Czech Republic. If that sounds pretty badass, it’s for good reason. Oceans singer Cammie Gilbert can hardly wait.

“They have very good food there,” she says with a smile.

Gilbert has had the opportunity to sample a lot of Central European cuisine of late. The band has been hitting the road hard overseas to promote their latest record, The Banished Heart. The group enjoys the travel—especially drummer Dobber Beverly, who’s a self-confessed European history buff. But it’s more a necessity than a luxury.

Oceans of Slumber is a signed band; a rarity in Houston’s metal scene. They’re also a challenging band; hard to describe. They play heavy, emotionally wrenching music, with a smattering of blast beats employed like a release valve. Gilbert’s powerful and dynamic voice bleeds beautifully over all of it.

Their sound is a hit with critics, with The Banished Heart earning praise from publications from all over the world. But the Oceans crew has to travel to the ends of the Earth to find a large, receptive audience for it. It’s been about two years since Oceans of Slumber have played their hometown.


“We obviously have to spend a lot more time in Europe because of just the nature of the music industry,” says Beverly, who has seen and done more in that industry than most Houston metal heads. “We’re Texas-style extreme metal guys making atmospheric and moving, emotional music with a woman singer. We’re not necessarily easy to stomach, and it takes an attention span that most of the time we don’t have here in the U.S. It’s just a bit more supportive over there.”

So, traveling overseas has become a way of life for Oceans—not a particularly easy one. Spending weeks on the road in foreign lands makes it tough to maintain any consistency back home. That’s why Oceans of Slumber will look a little different when they take the stage Saturday. Gilbert will still be up front, the undeniable center of attention, and Beverly will still hold down the middle behind his kit. Mat V. Aleman will return on keyboards. But the other three guys up there will be making their Houston debut.

Founding axe men Sean Gary, Anthony Contreras and Keegan Kelly have all stepped away from the band over the past year or so since The Banished Heart’s release. Each had his own reasons, but they all centered around the touring. Spending weeks at a time out of the country multiple times a year leaves precious little room for business and family back in Houston.

“It’s a younger breed of guys who are really hungry to do this kind of music,” Beverly says. “They know that there’s not a lot of outlets for this kind of music in the United States, and we’re one of them. For now, we’re signed to a major label—There aren’t many bands that do that, and there are no bands like us that do that. We combine things, yes. But we also have Cammie singing for us, and nobody else has a Cammie singing for them.”


Gilbert is not a screamer. She’s a bewitching force onstage, delivering sensitive and lyrical melodies rarely found in a band that deploys metallic extremity as liberally as Oceans. Her most affecting performance from The Banished Heart, the song “No Color, No Light,” still moves fans in ways that surprise her.

“A lot of people are waiting for that song, so they come up close to the front,” Gibert says. “Sometimes they’re crying, which usually makes me cry, so everyone’s just crying together. For a festival to be that big and have so many people who know our songs, it’s going to be intense.”

After experiencing those kinds of reactions, after all the work put into getting Oceans of Slumber signed and touring overseas, folding the group was never an option, Beverly says. They’ve wasted little time since the new guys came aboard, prepping songs for the next record.

“Our new record is not as emotionally draining or heavy as The Banished Heart was,” the drummer says. “It’s different. It’s still technical; it’s still super fucking heavy and dark. But at the same time, it’s also got a huge arena rock aspect—huge choruses.”

The new tracks are scheduled for recording later this year. No doubt they will sound like the next musical evolution for a group that continues to seek out its sound and its audience. A band like Oceans of Slumber has to stay moving to survive. They’re proud of the miles they’ve traveled and the stripes they’ve earned in an international scene that may never quite know what to do with their unique combination of talents.

“On Saturday, you’re going to see one of the best Houston bands play live,” Beverly says. “We’re insanely proud to be from here, and we want to represent ourselves that way. We’ve definitely done enough touring; enough playing. We’re battle-hardened, and we want to show that.”

Oceans of Slumber is scheduled to perform Saturday, July 20 at White Oak Music Hall, 2915 N Main. Doors open at 7 p.m. For information, visit whiteoakmusichall.com. $10 plus fees.
KEEP THE HOUSTON PRESS FREE... Since we started the Houston Press, it has been defined as the free, independent voice of Houston, and we'd like to keep it that way. With local media under siege, it's more important than ever for us to rally support behind funding our local journalism. You can help by participating in our "I Support" program, allowing us to keep offering readers access to our incisive coverage of local news, food and culture with no paywalls.
Make a one-time donation today for as little as $1.
Nathan Smith
Contact: Nathan Smith