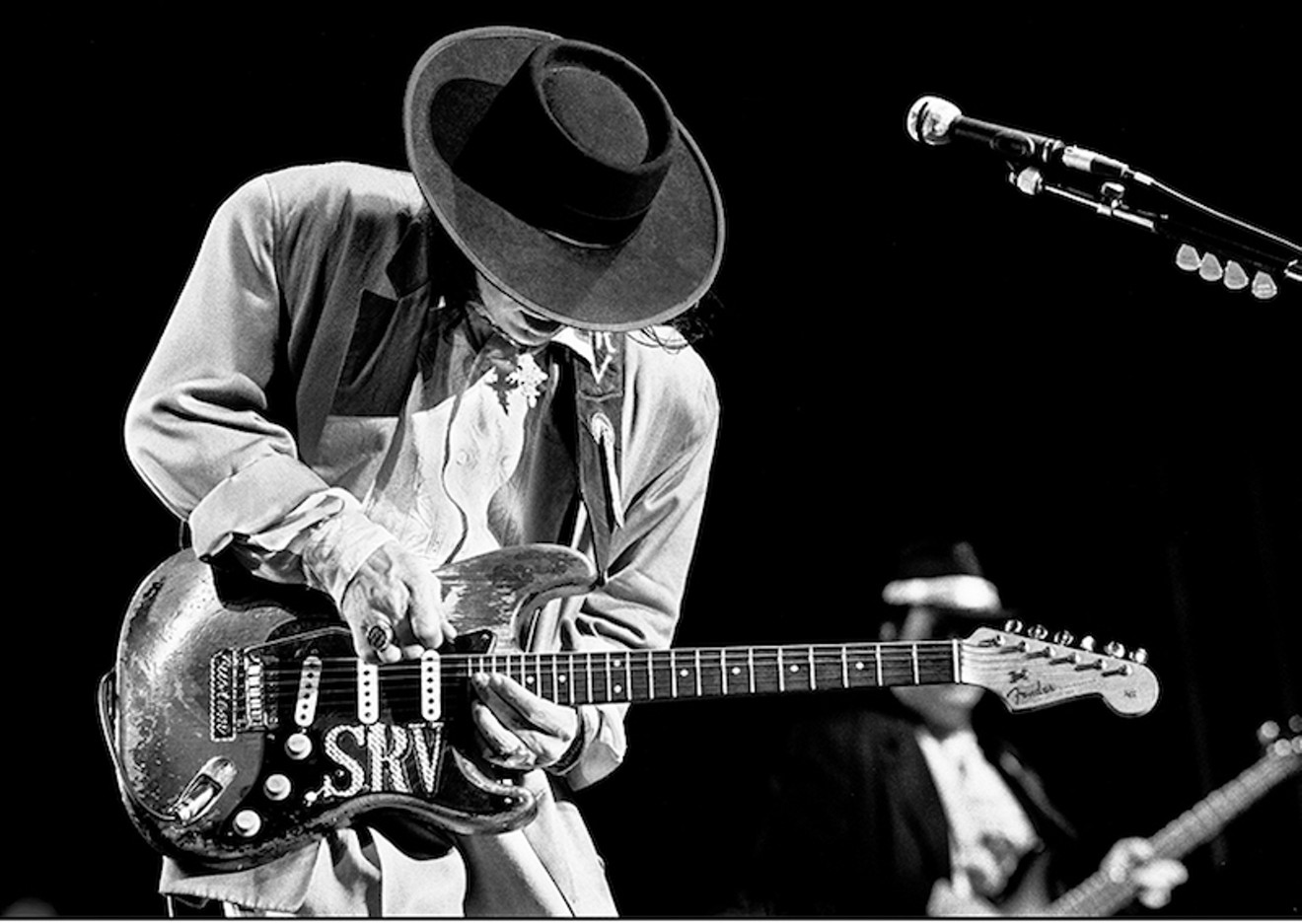 Tracy Anne Hart will release her impressive, first hand documentation of the rise of Stevie Ray Vaughan and Texas Blues in her new book, Seeing Stevie Ray. Photo By Tracy Anne Hart
Update 8 a.m. 3-12-20: The book event scheduled for Saturday has been postponed due to concerns about COVID-19.

To photographer Tracy Anne Hart Texas blues is her religion and Joe Ely, Jimmie Vaughan and his brother Stevie Ray Vaughan are her holy trinity. She began photographing musicians, specifically guitarists, as a student at the University of Texas many years ago and then homed in on the Texas blues scene.

Hart is releasing her book, Seeing Stevie Ray on April 6 and is celebrating with a print show and book release at the Antiquarium on March 14. Her impressive exhibit will be on display until April 19 and books will be available for pre-order and physically after April 6. She will have a small number of limited edition, signed and numbered books available as a package deal including two signed and numbered prints from the show.

Seeing Stevie Ray has been many years in the making and Hart is excited to finally share her body of work with the public. She has documented first hand the friendships and cross pollination within the blues world from the early days at Antone’s to more recently the annual holiday Jungle show with Billy F. Gibbons, Mike Flanigin, Sue Foley and Jimmie Vaughan.

When asked about the importance of documenting such important musical history as she has Hart says, “That was one of the reasons besides just being a show off and wanting to have those pictures in the book. I also wanted to spotlight the people who followed Stevie, but not in a tribute band sort of way.”

She adds, “Also, all of them are quite underrated. To me, these guys should be the ones that win the Grammys and have platinum albums,” she says.

Hart dropped out of the University of Texas and moved back to Houston, where her family had lived for quite a while and she had grown up.  She saw Joe Ely live and describes how photographing him quickly made a big impression on her.

“I was just starting and saw Joe Ely and I thought, man this guy is fantastic.  Seeing him and his music raised the level of my photography so much more than it had been like six months before.”

Thumbing through Hart’s large body of work it's hard to imagine that she managed to capture all of these giants in Texas music without having to move to the capital. “In order to get all the good Austin music, you didn't need to be in Austin.”


“In order to get all the good Austin music, you didn't need to be in Austin."

She describes how Ely and the Vaughan brothers would play Houston so often that she rarely found herself longing to make the move to Austin. “There is so much good music in this state. I think if you were to figure out per state which state had the most amazing music, I think Texas is if not the first, then in the top three,” say Hart.

Along with her photographs, Hart has added her descriptions of the evening those photos were shot and her technical approach to achieving her vision. She describes how in the pre-digital age she not only had  long wait times to see her finished work but also had to hand write long recipes for achieving what she wanted in order to recreate the magic in the future.

Readers can see first hand the reaction that a young Ely and an even younger Sexton had when they watched the Clash perform live. The look on their faces is of sheer astonishment and viewers can almost see the seeds of punk rock being planted in their youthful consciousness.

Her close friendship with Stevie Ray Vaughan stemmed from seeing him perform at the now defunct Fitzgerald’s when some fellow music writers from the Public News (a former Houston publication) dragged her along to photograph the guitarist after they were blown away by his contribution to David Bowie’s hit album, Let’s Dance.

Hart described how she longed to shoot artists who were no longer accessible when she got started. “There's so much that I missed, like Lightnin' Hopkins and Jimi Hendrix. I think that was initially one of the reasons that I was blown away by Stevie the first time I heard him play, it was a sound check and I thought, oh my God it's like my dream come true.”

Hart is a second generation photographer, her father to whom the book is dedicated, served in World War II as a medic and then got made medical photography his main focus. Hart has a unique ability to use lighting to convey sound in her photographs and capture the movement of the sound waves and artist without being blurry.

“Ambient light to me is comparable to slide, especially if you listen to an older song like “Black Magic Woman”, he uses that feedback, but he has so much control over it and that's kind of what I thought of doing it like this,” she describes.

The sound of Stevie Ray Vaughan bending the notes in her “Texas Flood Tryptic” is almost audible in three photographs hand selected by Stevie himself, which Hart admits has been a highlight of her career.

"Texas Flood Tryptic" were three photos hand picked by Stevie Ray Vaughan of him playing the solo on his hit song, "Texas Flood".
Photo By Tracy Anne Hart
Releasing her book has been a labor of love and is no doubt an important contribution to Texas music history, but it didn’t come easy. “Texas A&M Press they obviously do fantastic photo reproductions but they were the 25th publisher I approached about this. People say, ‘if you love what you do you'll never work a day in your life’, I’m sorry but that's not true,’ says Hart.

Adding to clarify, “You won’t work at taking the pictures, but you'll work at what comes afterwards; the getting them out there and getting a book published and so on and so forth.”

“Once in a blue moon people will ask me, ‘Are you still taking pictures?’ and my answer is, ‘Am I alive?’ Because I don't see how you can stop. That's not the kind of thing you retire from, anything in the arts if you have a passion for it you don’t stop.”

Tracy Anne Hart will exhibit her photos and have books available on Saturday, March 14 at The Antiquarium, 1976 West Gray from 6-8 p.m. Photos will be on display from March 14 - April 19 with books and photos available for purchase.  For more information visit theheightsgallery.com
KEEP THE HOUSTON PRESS FREE... Since we started the Houston Press, it has been defined as the free, independent voice of Houston, and we'd like to keep it that way. With local media under siege, it's more important than ever for us to rally support behind funding our local journalism. You can help by participating in our "I Support" program, allowing us to keep offering readers access to our incisive coverage of local news, food and culture with no paywalls.
Make a one-time donation today for as little as $1.