PJ Morton Photo by Patrick Melon, courtesy of Shore Fire Media
If you do an Internet image search of PJ Morton, you’ll quickly notice something common to most of the photos — stylish headwear. You have to scroll a bit to not see Morton — who visits House of Blues Friday, June 17 — in a ballcap, beanie, haute bucket hat or some other variety of chic headgear. Morton is a veteran musician, singer, songwriter and producer with multiple Grammys, but it seems too simple to infer that he’s into so many different hats because he wears so many as an artist.

“I do have probably every color you can imagine in beanies,” Morton laughed. “They just became part of my style. I don’t know exactly where it came from. You know, I think of Marvin Gaye, an iconic picture of him. I think maybe somewhere subconsciously it maybe stuck with me. But for me, I think it’s just part of my presentation, part of what makes me feel like I’m looking like me. I don’t know. There’s no special thing to it, but I sure have a lot of them.”

We do wonder whether the hats allow him to remain a little inconspicuous. In his career, Morton has often been a behind-the-scenes player, writing, producing or performing with acts like India.Arie, Jon Batiste and, most notably Maroon 5, as the band’s keyboardist. He’s simultaneously built a solo career that got a boost a few years ago with a Grammy winning, head-turning cover of the Bee Gees’ “How Deep is Your Love.” His solo work is now truly hitting its stride, thanks to his critically acclaimed new album, Watch the Sun.

“My journey has always kind of been in every world. Starting off as a writer it was always a selfless role in the sense I was creating something for other artists. And I was a producer. And then I became an artist while I was still a producer,” he said. “Once I got to Maroon 5, I was very used to being up front and initially it came as a relief to me to just be able to be the keyboard player and the background singer. It was really like a relief for me and now I think that’s what it serves as in my life, still juggling the two, they feed each other. I go sometimes from playing the Super Bowl to the House of Blues and get unique experiences from both.

“For me, it’s just a charmed life, man, I just feel really blessed to be able to experience and feel both of those things because I like them all the same - producing, writing, playing background, playing the leader - I think all of them are necessary for me.” 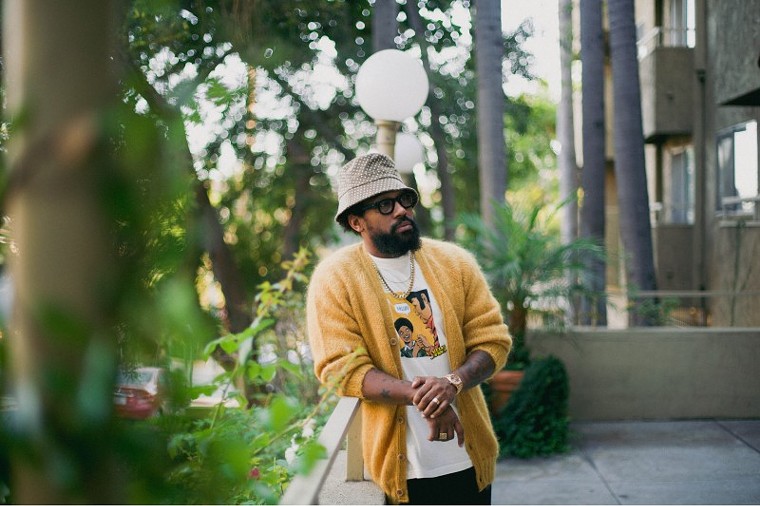 Morton's got a lot going on under his fashionable headwear
Photo by Laiken Joy, courtesy of Shore Fire Media
That might afford some insight to the kind of artist Morton is and anyone could guess about his pedigree based on Grammy wins alone. He’s taken home trophies four straight years now, including a win this year for his work on Batiste’s We Are, the reigning Album of the Year. Anytime he’s asked about the win streak, Morton redirects to the many times he was nominated - more than a dozen - but didn’t win.

“Every time I hear about the wins it just immediately reminds me of the losses because I don’t think anybody really talked to me about that when I was coming up as an artist,” he shared. “All you see is the wins really, that’s the only thing you post on your Instagram, the only thing you put out there is the beautiful stuff. And I just want to always, especially as a proponent for independence and being your own artist, I just want to make sure that it’s clear every time those wins are brought up, it was a journey to get here. It didn’t just happen. It’s going to be a journey, just stick with it and this can be a result. But, don’t think for a second I just came in here winning. It was a journey and a lot of lessons on the way.”

“Our favorite soul singers and the people who kind of define what R&B and soul is in our world came from there. I think that’s the reason why someone who isn’t even a churchgoer can connect to it, because it’s the soul they grew up on or the soul their grandmother played. You know, it came from the church,” he said.

Morton said getting his music start in that setting helped because “that environment is so supportive, but it’s also honest.” Miss a note on a solo and you’ll get a “keep working at it,” along with a pat on the back. He also said his father’s church “was my first audience. It was my first time watching my dad as a preacher do call and response with the audience. It’s no different than what I do at my concerts now.” He added that  gospel was changing during his youth, still rooted in its traditional sound but also taking on rock and reggae inflections. That allowed him to stretch musically.


He said keeping up with his father, who might call up a song that was “50 years older than I was, and I was supposed to follow him,” prepared him for bigger stages. “When I got to the Grammys to play, or to the Super Bowl, I’ve been in high pressure situations, I’ve been doing this my whole life. It really is a crazy training ground, depending on the church you grow up in.”

As a result, Morton’s songs can feel imbued with hope but he isn’t relying solely on good vibes for change. Tracks like “Religion” and “MAGA?” from his back catalog take an unflinching look at our shortcomings and urge us to do better. For a man who’s got an image of What’s Going On-era Marvin Gaye in an iconic red beanie seared into his subconscious, it makes sense.

“I heard an artist talk about being an artist versus being an entertainer and I think I fall somewhere between. I think the entertainer is supposed to distract you from all that’s going on, make you forget about your troubles, dance your troubles away,” he said. “And then, an artist is supposed to make you look at those things and when we do it in song form, enough for you to be able to chew on something that may be difficult to chew on.

“I think some people lean one way or the other more heavily. I like to try to fall somewhere in the middle and inspire and put truth in there,” he noted, “and also entertain and have a good time, as well.” He said the key is to not be formulaic or disingenuous.

“You don’t have to be the guy who’s preachy or inspiring,” he said. “Just be whoever you are, because somebody needs what you have as an artist.”

Lots of somebodies have needed what Morton provides as an artist and vice versa. Stevie Wonder, Nas, Jill Scott, Wale - he’s worked with them all, just on Watch the Sun alone. Even El DeBarge sings on a track that lovingly sounds like a DeBarge song. We ask who else he’d want to work with in his career.

“I was a huge Beatles fan,” he started. “There are some artists that I love that I don’t necessarily have to work with. Paul McCartney is the reason I’m a songwriter, you know? But I met him and I feel like that was enough.

“Stevie was the biggest in my world. That was the biggest thing that I ever shot for,” he continued. “I’m gonna say it everywhere that I can, but I would really, really love to work with D’Angelo. He’s also been so influential in everything that I do, so D’Angelo’s a big one for me. Kendrick Lamar is a counterpart that I would love to work with. And André 3000. I like all the people that you can’t get to, basically, I guess. Everybody that’s out of reach.”

If anyone can get to them maybe it’s Morton, a literal and figurative wearer of many hats, an entertainer with something to say, a talent for the secular masses who came from the church, a musicians’ musician, a patient and selfless artist who has emerged as a solo act on his own terms. That’s how we see him but we give him the last word and ask what he’d most want readers to know about him, something not written in the press releases and not seen in the interviews he’s done to promote his stellar new album.

“I’ve been looking at the state of music and how it really seems to not be about the music. Even as an entrepreneur trying to put out a new artist, it becomes much more about a narrative or a story than the music,” he said. “I don’t know that this is groundbreaking or anything, I don’t know that I’ve shared it like this, but it is really going to be my mission in my music, I’m going to fight because the labels are making it very hard. They look at numbers immediately.

“A lot of our favorite artists, our favorites today, would never have made it in this industry because they wouldn’t have had enough followers, they wouldn’t have had enough streams,” he said. “I’m just making it my mission to push the music and make sure that I keep the music over narrative as a musician and an entrepreneur. That’s just really become important to me the more that I see there are less avenues for true artists who may not be able to play the game of numbers and they want to be able to do their music.”