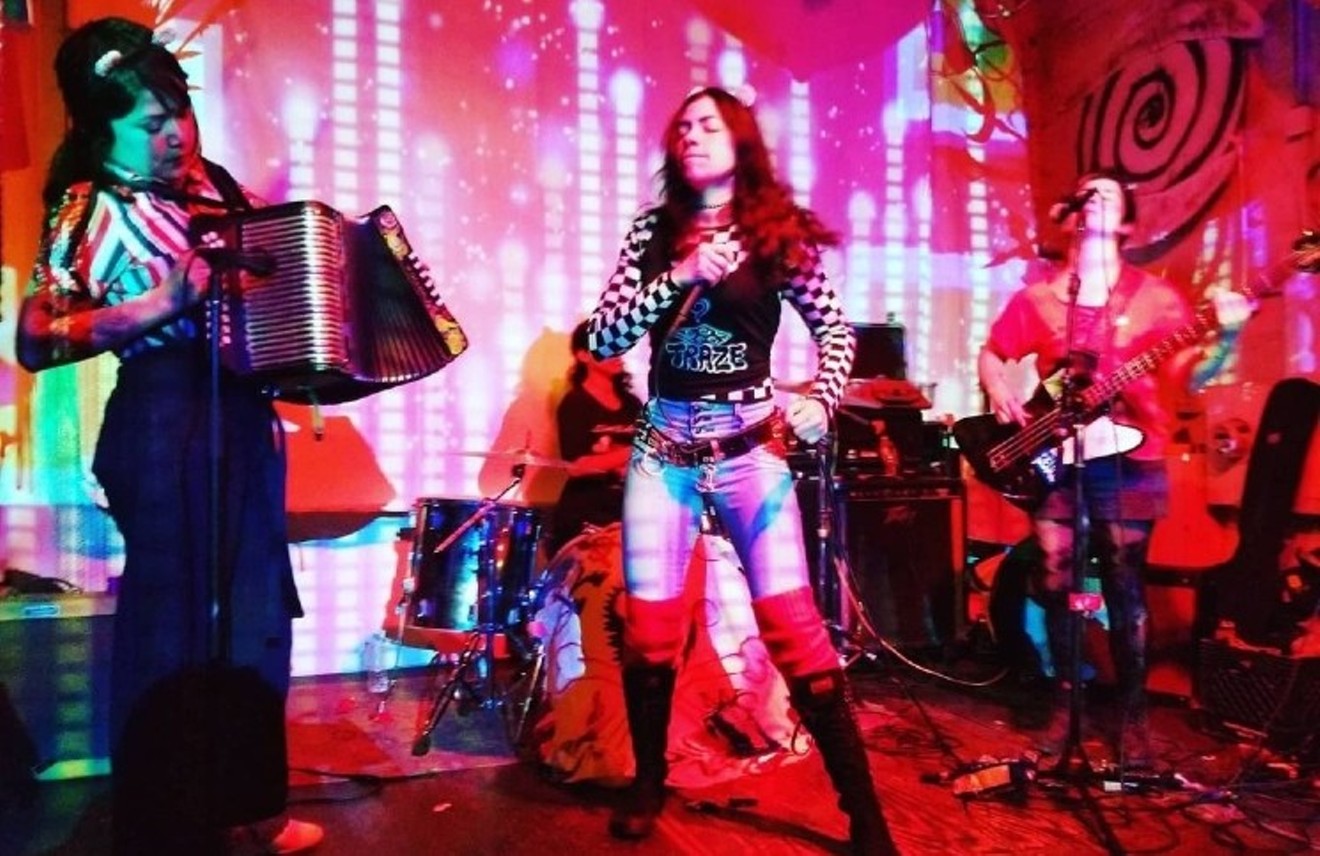 NYC guitar-less punks Ratas En Zelo Photo by Amber Rose Marmol, courtesy of Ratas En Zelo
Imagine this, punk rockers — a punk band with no guitarist. Joey, Tommy and Dee Dee but no Johnny. Also, visualize it as an all-woman group and almost all of its songs are in Spanish.

If that sounds awesome - and why wouldn’t it? - you don’t have to daydream it because it exists. The band is called Ratas En Zelo and if you’re in the vicinity of Satellite Bar this week, you can catch their Texas debut with fellow Latino punks Piñata Protest and Houston’s own Fuska.

“From the beginning, 2014 in the summer, me and Hiromy started talking at a party. We have a lot of friends that play in punk bands, like a small Latino punk scene, so that’s how we knew each other,” Toro explained. “She said, ‘Oh, we should get together and play because I play the accordion,’ and I said, ‘I play the drums.’ We weren’t pros at our instruments, we just wanted to see what we could come up with, I guess.

“Nothing against guitars,” Toro specified for you punk purists, “but that was our logic. If we already have an accordion, having a guitar would make the accordion secondary to the guitar.”


The band has a single album out, 2018’s blistering eight-cut collection, Despertar. Toro said anyone who may not have heard the album or seen Ratas live might be surprised by the sound.

“I guess people that don’t know us, they see an accordion and they think that it’s folk punk or folk music or cumbia or something like that, right? They don’t immediately associate accordion with punk. But I don’t know, I think we are getting a little bit known for that, for being the accordion band with no guitar.”

Of course, there is an accordion punk band that preceded them, San Antonio’s legendary Piñata Protest. They’re accompanying Ratas En Zelo on its full run of dates in the Lone Star State this week.

“I think Hiromy was the one that knew them first, maybe because of the accordion, I’m not sure. But she knew them first,” Toro said of Piñata Protest. “Obviously, we listened to them and we played with them in 2016 in Brooklyn when they were touring with Brujeria. They did a small local show with us and other bands from our scene, so yeah, we’ve been connected in a way since then.

Toro said they may be kindred in some ways, but Ratas En Zelo's music is a big departure from Piñata Protest’s Tex-Mex punk. Its sound is influenced by other Latin American locales. Hiromy and Yadee are from El Salvador and María is Peruvian. Toro said they were all born in their respective countries and came to the States as teenagers. Natalie was born in the United States, in New Jersey.


“I think Hiromy’s reason to want to play an accordion is because of cumbia, like Colombian cumbia, and Piñata would be obviously the Mexican accordion,” Toro said. “Hiromy, she loves cumbia, well, we all do, but I’ve heard her say many times that she never wanted to learn accordion to play cumbia. She loves cumbia to dance, but not to play it.

“Even though she’s influenced to play the accordion because of cumbia, cumbia doesn’t really influence the band,” Toro continued. “A lot of people think, oh, they play cumbia punk and we’re like no, not at all.”

“Like other punk bands, we have a song against the police, the cops. One about immigration, one about being women and respecting us as women. Yadee always says we don’t want to look like victims, like oh, we have all these problems and our lives are miserable because of it. We want to see the positive side of it,” Toro explained. “Okay, we have a problem — how can we make it better? How can we empower ourselves to make the situation better even though we have to live with it? We struggle, but we’re going to grow from all of these things that we live with.”

One thing the radically-different punk band has in common with other bands is they’ve had to wait out pandemic lockdowns to perform for their fans.

“We have never played Texas. We have been planning this since before the pandemic. We were supposed to do this mini-tour with Piñata in 2020, like in the summer. Because everything shut down obviously we didn’t do it. Now, we’re really excited,” Toro shared. “We know we have a little following in Texas as well. You know how everything is specific now, you can go on social media and check how many people follow you in this city or this other city. In Texas, we have a lot of listeners and followers, so we’re really excited.” 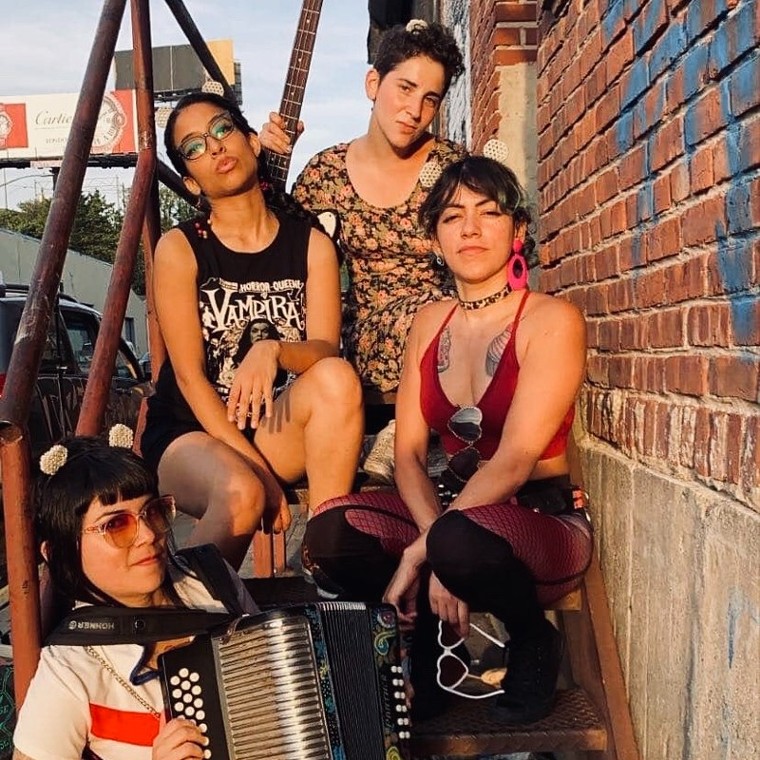 The band makes its Texas debut in Houston this week
Photo by Daniella Cardoza, courtesy of Ratas En Zelo

The band is also excited to be working on a new album. They’re about halfway through writing the new record, Toro reported. She said everyone in the band has other obligations which keeps them mostly in New York. They’ve only toured California, Illinois and Minnesota ahead of Texas. And their day jobs and other artistic interests crowd into songwriting time. Yadee is a comics artist whose work is featured on lots of Ratas merch and Hiromy runs a successful and acclaimed dance instruction business on TikTok and Instagram.

“It takes us a while to write songs I think because we’re all busy” Toro admitted. “For our next song that we’re working on, (Yadee) wanted to write about something completely different and I said, ‘You know what? It’s going to be a story about a woman, we could focus on this other side of her being a woman.’ So, she started from there. I think the lyrics, depending on how you see them, they could be political, but we’re not intentionally saying this is going to be a political song, just more like everyday life because of our immigrant experience and because of our experience as women, that is what we live and know and see.”

They do tackle troubling subjects, shouting down la migra, los puercos, injusticia and pinche cabrónes of all kinds. Still, Toro insists the band doesn’t take itself too seriously. They wear “rat ears” from the 99 cent store onstage. They want people in the pit having fun. There’s that whole not having a guitar thing. Even their name started as a goof.

“Okay, so that started as a joke because Yadee, she’s a clown, she’s joking around all the time. We didn’t really have a name and she would just say we’re gatas, gatas en zelo, as a joke. And then a friend at a show or something heard it and she was like, ‘Gatas? Or, Ratas En Zelo?’ and we just kept it.

“That was kind of making fun of punk bands’ names, you know, like they’re so aggressive and raw,” Toro added. “We’re like, ‘Yeah! Ratas En Zelo! We go ‘Eek, eek!’’ We don’t take ourselves that seriously. It’s just punk and we wanna have fun.”

Ratas En Zelo begins its first-ever tour of Texas Thursday, February 24 at Satellite Bar, 6922 Harrisburg. With Piñata Protest and Fuska. Doors at 7 p.m. for this all-ages event. $15.
KEEP THE HOUSTON PRESS FREE... Since we started the Houston Press, it has been defined as the free, independent voice of Houston, and we'd like to keep it that way. With local media under siege, it's more important than ever for us to rally support behind funding our local journalism. You can help by participating in our "I Support" program, allowing us to keep offering readers access to our incisive coverage of local news, food and culture with no paywalls.
Make a one-time donation today for as little as $1.