Nashville Pussy: From the South, With Ferocious Rock'n'Roll Decontrol 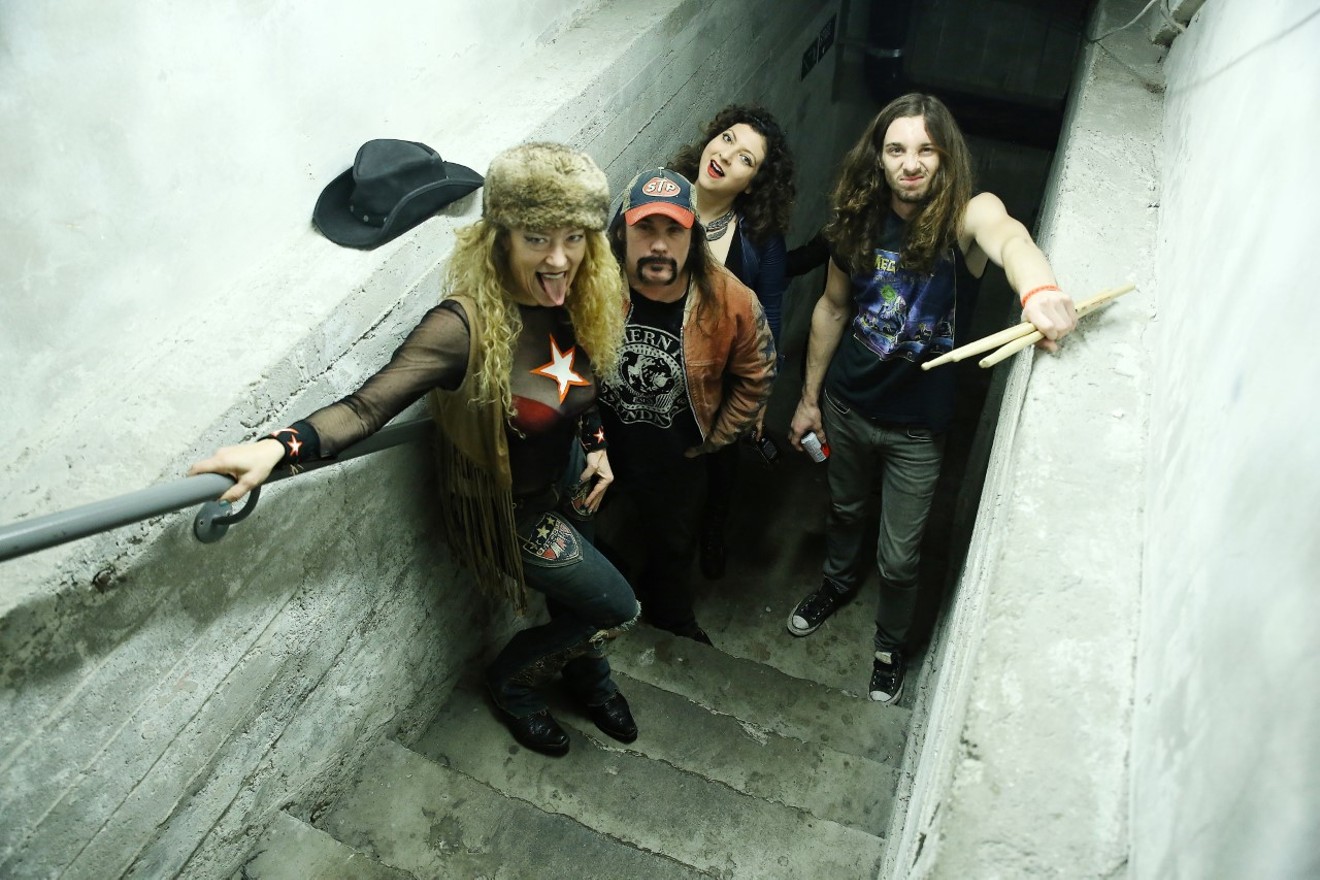 
In the 1980s and 1990s, rock’n’roll revivalism swept through the Do-It-Yourself landscape of American music, providing an authentic counterpart to the rather tepid aura of alt-rock that infected the airwaves. Some later leaned toward ragged country, like the Supersuckers, or bristled with a hardcore ethos, like Zeke, or oozed with molten stoner rhythms, like Fu Manchu, but Nashville Pussy threw down the Southern gauntlet with bombastic blasts of rock’n’roll firepower. They have continually swept through cities like Houston, where they will be igniting White Oak Music Hall on March 1 for a free show, unless you are under 21. Young guns have to shell out $15.

Radiating like trailer park hellions with Ph.D.s in street smarts, their music is a non-stop, hoarse-raspy, take-no-prisoner stew resurrected from the fiber of Motorhead, early AC/DC, and Ted Nugent, but they offer a blistering dual-sex approach. Like centaurs of Greek myths, they are a toughened hybrid: with a half-male, half-female line-up, they prove that women (lead guitarist Ruyter Suys, wife of singer/guitarist Blaine Cartwright, and bassist Bonnie Buitrago) have more than enough pummeling fretwork and savvy ingenuity to master music derided as cock-rock.

That territory is now filled with pussy power, and their songs unleash a sexual politics easy to digest in soiled bars, crap-smelling video arcades, humid hot rod backseats, and dust-smeared dirt track races. “I think both Ruyter and I only had a couple or so females that we could look up to as musicians when we were growing up,” recalls Buitrago. “For me, Ruyter was one of them! She rocks harder than anyone … We do what we do with pride — definitely with strength, skill, and resiliency! We kick ass, and what can I say, lots of boys just can’t keep up with us!”

Their new tuneful slab “One Bad Mother” berates teachers, preachers, and drinkers who watched as another good person slipped away.


But behind the tough, boilerplate drumming, thunderous guitar assault, and mountains of attitude, Nashville Pussy’s lyrics are multifaceted and pull no punches as they eviscerate pop culture, history, revisionism, and storytelling. Their new tuneful slab “One Bad Mother” berates teachers, preachers, and drinkers who watched as another good person slipped away.

Yet, the genesis of the songs began with a less fierce approach. “Actually, we had a guest keyboardist on a track this time,” explains Cartwright. “Ruyter usually plays organ or piano if needed. She’s written riffs guitar parts on keyboards before too. I love the way Ruyter plays the piano. It’s one of my favorite things. It reminds me of the way Mick Jagger plays harmonica or how I play guitar. Extra feeling and emotion because there’s less technique to fall back on.”

Meanwhile, “Just Another White Boy” takes stabs at kids growing up in the hinterland who are too lazy to cook their own food; instead, they blow-up their futures and want to play fake-ass blues. Both can be found on the searing Pleased to Eat You, which debuted last fall on Ear Music.

Further back in the catalog, “The South’s Too Fat To Rise Again” winks at the waistlines of Confederate dreamers, while “Up the Dosage” lists all the debauchery corroding the bellies and brains of people until psychosis makes ‘em finally drive off cliffs. Then the bluesy porch-holler “Lazy Jesus” is like a South Park caricature of a religious idol that heals the sick but can’t fix a damn chair.

And such comedy stirs their core. As Cartwright vows, “There aren’t that many funny people writing lyrics. So, I have to be extra funny to make up for them all. The first time anyone hears the lyrics is in the studio when I’m recording vocals. If I hear laughter coming from the control room, I know I’ve done my job. Someone once told me that it seems it’s more important to me to make my bandmates laugh than to have a hit record. Someone has to have their priorities in order.”

And buried beneath the gasoline whiffs and molten-metal, some bareknuckle politics abound, whether the band is being critical of corrupt state troopers harassing touring rockers in “Ain’t Your Business” or unleashing “We Want a War,” which seduces licks from 1970’s thunderfoots like Deep Purple to tell the tale of numb war mongers who attack those “who don’t look like us,” all ending in horror.

“Thanks for noticing!” Cartwright beamed to me in a message as their van recently screeched down a lonely highway. “I’m very proud of “We Want A War.” Yeah, I hate war and love barbecue! Grilling is better than killing any day. I personally think my spicy chicken and homemade beans could conquer nations.”

In “Atlanta’s Still Burning,” buffoonish men are caricatured as “king[s] of the barbecue nation” roving in “Malibus” as bullets tear through neighborhoods; meanwhile, other men, such as in the trenchant “Pillbilly,” are born into a moonshine heritage but are lured by “Pill mills” and the “oxycotton express” made possible by a system easy to abuse.  Behind the power chords and lustful id of the singer lie these barbed expressions of gritty, on-target humor and eyewitness accounts of working class people being trammeled by addiction.

And since Nashville Pussy are venturing to Texas, the crowd will likely jump out of its skin when they unleash tunes that name drop San Antonio (“Meaner Than My Mama”) or slither like ZZ Top-esque rock-shuffles as Cartwright calls out local icons like Lightnin’ Hopkins (“Good Night for a Heart Attack”).

And Cartwright’s own roots place him in town too. “I saw the Ramones in Houston at Cardi’s in 1984 on the Too Tough To Die Tour. It was very intense. Too intense. I had been a fan since 1978, when I was in 8th grade. I was young and from a small town in Kentucky. I didn’t get to see them until the Houston show … The Ramones was my first punk show. I came ready to pogo.”

“But as soon as the music started, everyone began slam dancing and stage diving. I had no idea what was going on. I kept getting knocked on my ass and kicked in the head. The fact that I had a Springsteen The River shirt on didn’t help. That was a great week of Houston concerts. The Ramones at Cardi’s, Bruce at the Summit, and the Blasters at Fitzgerald’s. I assumed the same crowd would be at all three shows.”

Certainly, Nashville Pussy are not politically correct snowflakes offering soft elbows in a cruel, sleaze-ridden world. They remain down’n’dirty rock’n’roll believers some might disregard as retrograde. But their molten music is an unruly conglomerate of well-carved noise, jacked-up solos, and kick-me beats that often camouflage lyrics that are lurid and wild-eyed, impressive and formidable in their ratty intelligence, and Southern in scope but oozing with a full-fledged, rambunctious, raw-hearted, and ribald American spirit.

Nashville Pussy is scheduled for March 1 at 8 p.m. with openers Hell’s Engine and Speeddealer at White Oak Music Hall, 2915 North Main. For information, visit whiteoakmusichall.com. All ages. Free to 21 and over, Under 21 $15 plus fees.
KEEP THE HOUSTON PRESS FREE... Since we started the Houston Press, it has been defined as the free, independent voice of Houston, and we'd like to keep it that way. With local media under siege, it's more important than ever for us to rally support behind funding our local journalism. You can help by participating in our "I Support" program, allowing us to keep offering readers access to our incisive coverage of local news, food and culture with no paywalls.
Make a one-time donation today for as little as $1.
David Ensminger