The Music Addictions of Michael Goldberg

The Sex Pistols early in their career. By the time Michael Goldberg spoke to them, the lineup had changed and they were near the end. Guitarist Steve Jones (right) did not have a high opinion of music journalists in general. Wikimedia Commons/Photo by Koen Suyk
What is the state of Music Journalism today if it can even still be called that?

In 2022, seemingly anyone with access to a keyboard and the internet and possessing of at least a) one working ear attached to their head and b) an opinion; can and do pontificate on blogs and YouTube videos freely about both their favorite and least favorite bands, performers, albums and shows. 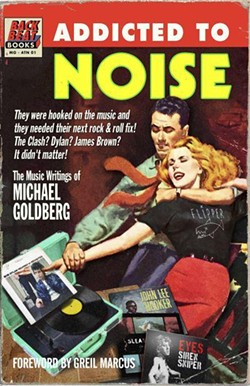 Book cover
Some (read: The Young) cherish the development of a free-for-all sonic vox populi. Anyone can be a music journalist! And maybe there’s some free ticket or streams (who gets CDs anymore?) in it for them.

Others (read: The Aging) scoff at the unqualified masses and pine nostalgically for when music journalism was a craft, something one worked at and developed over years of dealing with and navigating persnickity publicists, adverse artists, remote record company execs and venomous venue owners. It was art, but it was also war.

And if that’s the case, Michael Goldberg is a Five Star Journalist General. He’s spent more than 40 years writing about music and musicians for a wide variety of publications (in print!) like Esquire, Creem, New Musical Express, Musician, The San Francisco Chronicle, and a decade at every writer’s wet dream job, Rolling Stone (albeit a bit after the Almost Famous years…).

In 1984, Goldberg also developed and ran the first Internet Music Magazine. Its title is shared with his new book, and pretty much sum up his life’s motto. He has collected the best of his writing in the dense, expansive, and leapfrogging anthology Addicted to Noise: The Music Writings of Michael Goldberg (440 pp., $34.95, Backbeat Books).

Oh, and The Artist Formerly Known as Prince, who—counter to his reputation—Goldberg writes was effusive, comedic, and polite. As long as you didn’t record the interview.
By contrast, there were the surly Sex Pistols—who tried to actually sneak out of the planned interview until Goldberg tracks them down in a restaurant. When Goldberg asks Steve Jones what he thinks of the music press, the guitarist answers “Bunch of cunts.” When Goldberg asks why, Jones counters with “’Cause they ask stupid questions like that one.’

It's not all glory and flying on the Starship with Led Zeppelin, kiddies.

Some long form essays are included as well, like a mini-novella in which Goldberg connects the music of Bob Dylan with the writings of Jack Kerouac, and others on radio stations and formats and the music biz.
Two pieces on James Brown are of special interest. One from 1981 with Goldberg and the Godfather inside of San Quentin Prison as he gives an explosive show for inmates. And the latter from 1989 when Brown was about to become an inmate himself. Goldberg shows a shattered, schizophrenic, gun-toting, PCP-fried delusional man surrounded by enablers.

It’s not for no reason the latter, often sad piece is titled “Wrestling with the Devil: The Struggle for the Soul of James Brown.” Its subject was not amused when it came out in Rolling Stone as a cover story. Later, Goldberg interviews funkateer Rick James while the Super Freak was spending time in prison.

Beach Boys fans will take note of two intense pieces. One tracing the last three days in the life of the troubled Dennis Wilson (who drowned while heavily intoxicated). And the other on the chaotic life of Brian Wilson during the time of his first solo release while under the “care” of controversial therapist Dr. Eugene Landy.
Goldberg also gets the treatment from the famously reticent Lou Reed. When the writer begins a question with “I was a kid when the first Velvet Underground record came out…” Reed shuts it down with a curt “Let’s talk about my new record.”

And in a 1991 profile of Michael Jackson—in which Goldberg spends time at Neverland Ranch but never gets the opportunity to actually speak to his subject—he writes the now-squeamish sounding line “Jackson is especially fond of children.” Yeesh!

The pieces do not run in chronological order and can consist of a word count from several dozen to tens of thousands. It’s as if the author is encouraging readers to Quantum Leap-it, jump back and forth to pieces that will interest them today, and them something else tomorrow.

Goldberg also adds new intros, updates and reflections. And most of his stories at least fill in some of the history of the artists profiled. So, there’s something new for both the person who’s never heard of said performer, as well as the most die hard of bootleg collecting fans. Just as music journalism should be.
KEEP THE HOUSTON PRESS FREE... Since we started the Houston Press, it has been defined as the free, independent voice of Houston, and we'd like to keep it that way. With local media under siege, it's more important than ever for us to rally support behind funding our local journalism. You can help by participating in our "I Support" program, allowing us to keep offering readers access to our incisive coverage of local news, food and culture with no paywalls.
Make a one-time donation today for as little as $1.