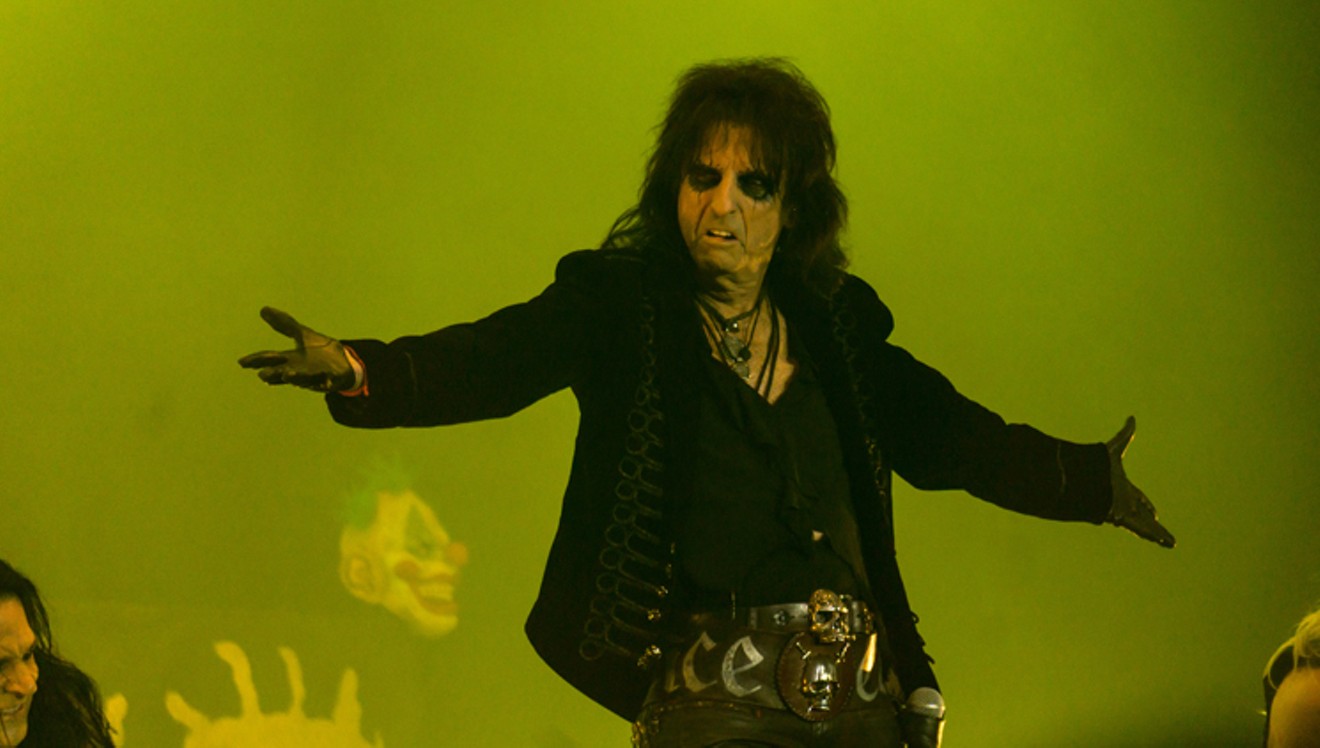 Does this man look like he's nearly three-quarters of a century old? Alice Cooper onstage in England, 2017. Photo by Ralph_PH, CC by 2.0/Wikimedia Commons
He’s long been lauded (or, depending on your point of view, condemned) for being “The Father of Shock Rock.” But this upcoming February 4 when he turns 75 years of age, he could up that title to “Grandfather.” 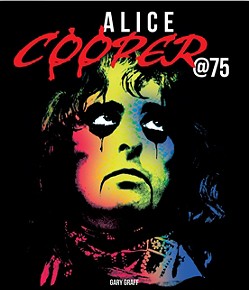 Book slipcase cover
Still, as recently as this year, Alice Cooper is out there many nights on tour putting on a two hour show while alternately being beheaded, electrocuted, stabbed and beaten onstage. All in between singing/snarling classic rock classics like “I’m Eighteen,” “School’s Out,” “Billion Dollar Babies,” and “No More Mr. Nice Guy.” He also veers to ballads (“Only Women Bleed," "How You Gonna See Me Now") later material (“Feed My Frankenstein,” “Poison”), deep cuts and favorite covers.

Now, the preacher’s son born Vincent Furnier gets the classy coffee table book treatment with Alice Cooper @ 75 by Gary Graff (208 pp., $75, Motorbooks). It’s a beautifully packaged hardcover book on quality paper in a slipcase with a velvet painting-style cover and an envelope insert containing a handful of photos and posters.

A big appeal here are those 350 color photos of Alice and his bands over the years in posed and live situations, record covers, backstage passes, promotional posters, and other ephemera like tickets (the evil Alice Cooper Band once opened for sweet Linda Ronstadt at the Whisky a Go Go??). There’s also a fold-out timeline of his life events.

Where these lavish coffee table books usually fall short is in the text department, with authors padding out Wikipedia-style biography, scant musical analysis, and repeated well, well-worn stories. But these books aren’t usually written by Gary Graff.
The longtime music journalist for newspapers, magazines and the author of many biographies and breakdowns, Graff eschews the standard style of prose in favor of 75 mini-chapters that cover Cooper’s life, music, passions, projects, and ups and downs.

And it works. The level of detail is impressive, and while Graff seems to draw mostly on previously-published books, articles, and interviews, he’s also got a 35-year history of conducting his own talks with Cooper and those around him.
Each record gets its own chapter, along with important events, people, songs, and passions both healthy (golf, Jesus) and not so (booze, cocaine, rehab). Cooper’s obsession for golf is legendary, and Graff writes of the time in the ‘70s where the bête noire of many a parents found himself on a green giving Bob Hope advice on his swing while comedian Jackie Gleason and the then-sitting U.S. President Gerald Ford looked on.

But it’s no gloss job. Cooper’s less-than-stellar records (including four that he says today he has little or no memory of even making) are addressed honestly. As are some of the grudges of original band members, since healed. There’s also details of his appearances in films, documentaries, and comic books.
Graff’s text also contains plenty of humor in the Alice Cooper story because—as Cooper has always maintained—“Alice Cooper” is both a character and his real name (he legally changed it early in his career). But two completely separate entities.

Only the former likes to play with snakes. And details emerge about the various reptiles he’s taken on tour over the years, with names like Julius Squeezer and Cobra Winfrey. One of them, Popcorn, disappeared down the plumbing Cooper’s hotel room in Knoxville, Tennessee when he left the creature in the bathtub overnight. Popcorn popped up two weeks later—in a completely different room where the very shocked country singer Charley Pride was staying!

The book ends very recently, with last year’s release of his Detroit Stories record and even includes the recent departure of guitarist Nita Strauss. And while the price tag may be a bit high, let’s just say the Alice Cooper fan on your Christmas list won’t mind a delayed gift when Alice Cooper @ 75 is released later next month.
KEEP THE HOUSTON PRESS FREE... Since we started the Houston Press, it has been defined as the free, independent voice of Houston, and we'd like to keep it that way. With local media under siege, it's more important than ever for us to rally support behind funding our local journalism. You can help by participating in our "I Support" program, allowing us to keep offering readers access to our incisive coverage of local news, food and culture with no paywalls.
Make a one-time donation today for as little as $1.