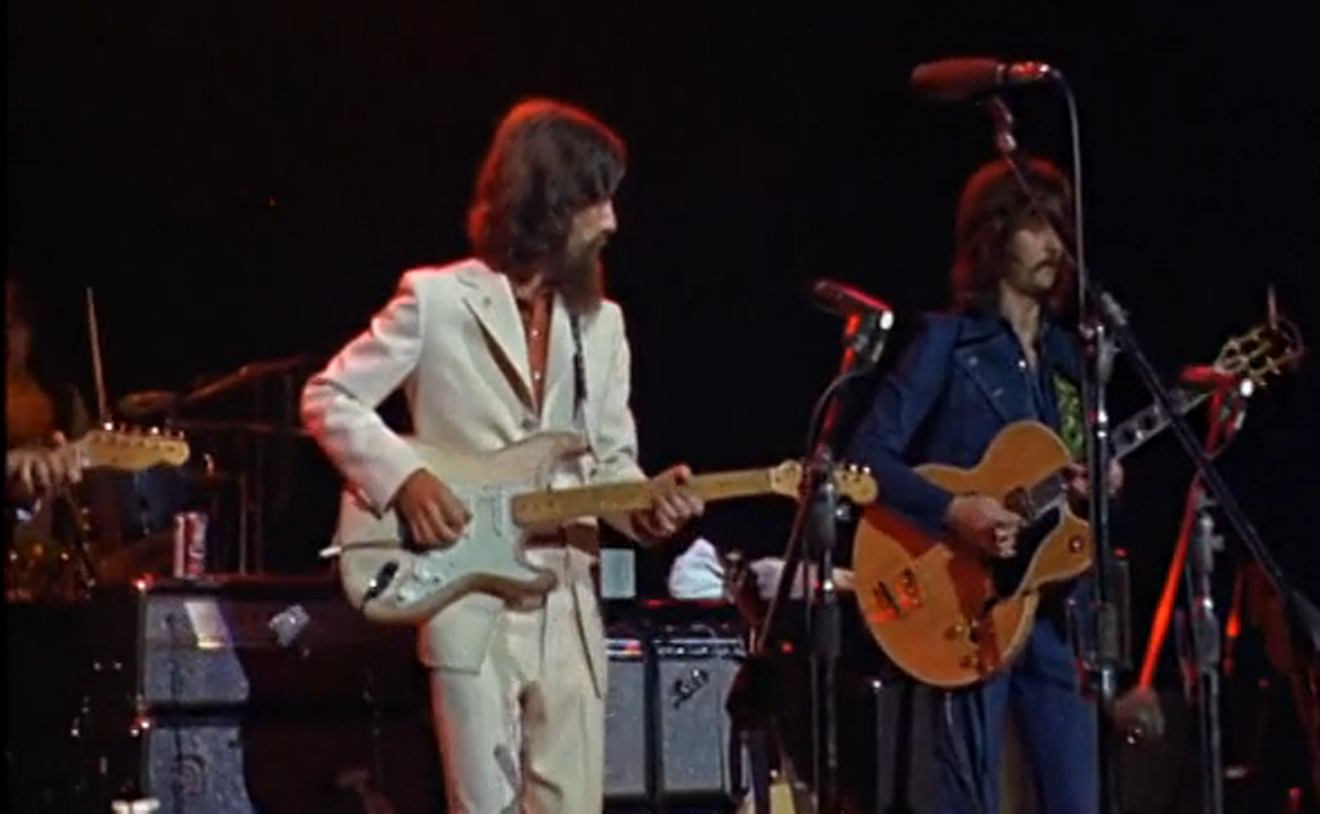 George Harrison and Eric Clapton perform together at the Concert for Bangla Desh in August 1971 at Madison Square Garden. Screen Grab/The Concert for Bangla Desh
One of rock and roll’s most enduring friendships was between George Harrison and Eric Clapton. From December 1964 when they first crossed paths during a Beatles Christmas show at London’s Hammersmith Odeon (Clapton was playing with the Yardbirds) up to Harrison’s 2001 death, the pair shared recording studios, concert stages, living room parties and—most famously—a wife.

Chicago Review Press book cover
There’s plenty to unpack in this richly detailed book. But its presumed premise of digging deep into their relationship is something of a misnomer. It actually reads more like a dual biography of the musicians, with alternating chapters, in which they each make guest appearances.

There’s Clapton showing up at a Beatles session at Harrison’s invite to put a scorching solo on “While My Guitar Gently Weeps.” Harrison joining Clapton on tour with Delaney and Bonnie and at the Concert for Bangla Desh. Harrison writing “Here Comes the Sun” in the garden at Clapton’s home. And Clapton offering moral and musical support to Harrison for an ill-fated Japanese tour. And later, Clapton directing the music at the memorial The Concert for George.

Much of the content is familiar to Beatles/Clapton obsessives—a more general audience will find a lot to dig into. Womack is one of today’s foremost Beatles scholars (having penned, among other things, a two-volume biography of producer and true “Fifth Beatle” George Martin). And he and Kruppa still manage to mine new territory and anecdotes rock nerds will devour, even if they’re not about the title subjects.

Like the “Wall of Sound” phrase so closely associated with Phil Spector originated in an ad put out by Rolling Stones manager Andrew Loog Oldham praising the producer’s work on the Righteous Brothers’ hit “You’ve Lost That Lovin’ Feeling?”

Womack and Kruppa also reconstruct what is likely the most detailed dissection printed to date of the freewheeling recording process for Harrison’s All Things Must Pass, and to a lesser extent Clapton’s (under the guise of Derek and the Dominoes) Layla and Other Assorted Love Songs. And to think both of those epochal and classic rock cornerstone albums came out in November 1970. A joke that Harrison plays on Phil Collins decades after then then-unknown young drummer contributed congas to a session shows “the Quiet Beatle’s” razor-sharp humor.

And then there’s “Layla” herself—Patti Boyd Harrison Clapton. Rock’s greatest muse (who inspired many tunes including the “Something,” “Layla,” and “Wonderful Tonight”) was first married to Harrison, who she met on the set of A Hard Day’s Night. As Clapton would visit the couple in their home over time, he became obsessed and madly in love with his best friend’s wife.


Eric and Pattie had a clandestine affair, while George was off having his own fun with females. Yet even after bluntly telling Harrison the tortured secret he held inside, he and the former Beatle (and Pattie) continued to socialize. At one point, the musicians have a bizarre 2-hour guitar duel seemingly over Boyd in front of the shocked eyes of actor John Hurt (by whose account, the drunk Clapton won, even with seemingly inferior equipment given provided by Harrison).

As a desperate effort, Clapton told Pattie if she didn’t leave George for him, he’d go straight into heroin abuse. Pattie demurred, and Clapton (with a new girlfriend) spent two years holed up in his mansion doing drugs.

Yet when Pattie finally did leave Harrison after Clapton got clean from drugs, it was bizarrely anticlimactic. It’s as if the chase was better than the catch. Harrison and fellow ex-Beatles Paul McCartney and Ringo Starr would even jam with Clapton at the 1979 wedding. But the marriage was legally over a decade later, Clapton’s Herculean boozing and much-cooled passion two main reasons (Boyd’s own book, Wonderful Tonight is absolutely worth reading for her perspective).

Some readers will likely wish for more personal perspective coming from the subjects themselves or author analysis about their friendship in the text rather than journalistic reportage. But overall, All Things Must Pass Away is a solid addition to the Classic Rock bookshelf.

All Things Must Pass Away: Harrison, Clapton, and Other Assorted Love Songs
By Kenneth Womack and Jason Kruppa
304 pp.
$28.99
Chicago Review Press
KEEP THE HOUSTON PRESS FREE... Since we started the Houston Press, it has been defined as the free, independent voice of Houston, and we'd like to keep it that way. With local media under siege, it's more important than ever for us to rally support behind funding our local journalism. You can help by participating in our "I Support" program, allowing us to keep offering readers access to our incisive coverage of local news, food and culture with no paywalls.
Make a one-time donation today for as little as $1.