Jean Beauvoir: A Life of Music and Mohawks 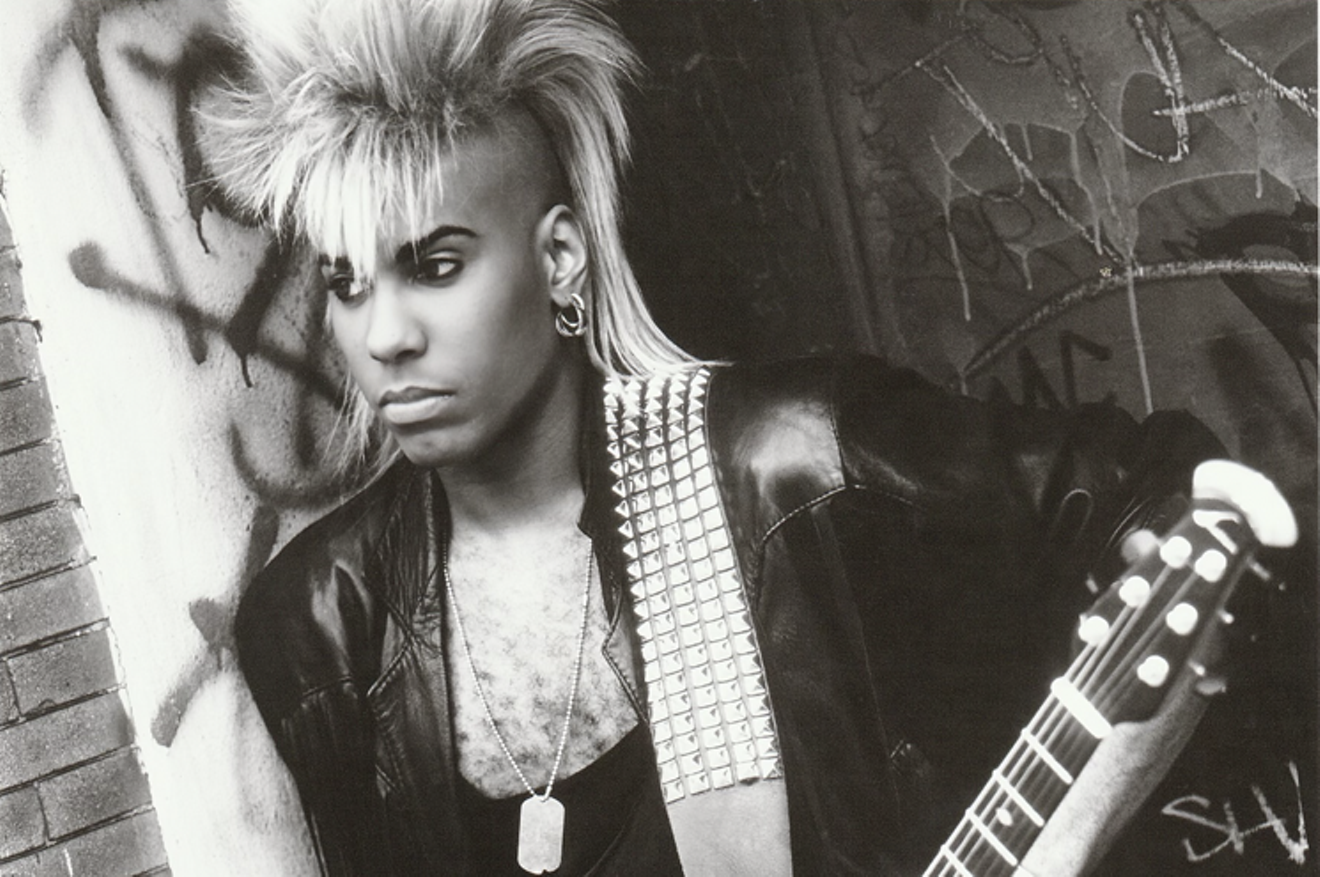 Jean Beauvoir in the mid-1980s around the time of his debut solo record, "Drums Along the Mohawk." Photo by Caroline Greyshock
Jean Beauvoir has certainly had a wide-ranging career. As a globe-trotting performer, songwriter, producer, and even business executive, his decades of stories and experiences are all over the place. But they all come together in his new memoir written with John Ostrosky, Bet My Soul on Rock ‘n’ Roll: Diary of a Black Punk Icon (288 pp., $27.99, Chicago Review Press).

“I’ve been thinking about it for 10 or 15 years, and people have been telling me ‘You should write a book!’” the ebullient Beauvoir says from his home in Bonita Springs, Florida. “So, I kept putting all these notes down. And when COVID hit, I was able to focus on actually doing it.”
The book charts Beauvoir’s journey from growing up in Chicago to parents of Haitian descent, working with Gary U.S. Bonds and the doo wop group the Flamingos while still a teenager and an early ‘80s stint playing bass with the controversial punk group the Plasmatics.

Lead by the outrageous front woman Wendy O. Williams, the band made more headlines for her aggressive performance style, state of dress (or undress), and her affinity for wielding a chainsaw or detonating explosives in automobiles onstage as their full throttle music.

They were the punk rock poster children for Every Parent’s Nightmare. As a result, many people have at least heard of the Plasmatics even if they’re not familiar with one note for their music. For Beauvoir—standing on a riser by the drummer and clad in an all-white tux and tails while sporting sunglasses and the beginnings of the blond mohawk that would become his visual trademark—it was all part of a single package.
“Whenever you choose to be visual act and do such outlandish things, yes, it’s going to overshadow the music at some point,” Beauvoir says. “But I kind of felt that the Plasmatics music was a soundtrack to the show, and that’s how we rehearsed it. Like planning when the chickens would fall out of the ceiling or she would shoot at the lighting truss.”

He would also go on to have a multi-faceted career as a solo artist, band leader (Voodoo X, Crown of Thorns), band member (Little Steven and the Disciples of Soul), songwriter, and collaborator with artists including Paul Stanley of KISS, moving into more mainstream rock and hard rock. His most memorable song is likely “Feel the Heat,” which was used in the Sylvester Stallone 1986 action/cop movie Cobra.

Jean Beauvoir recently.
Photo by Rik Bauters
In addition to his career as a performer, Beauvoir has also sat behind
the glass for producing duties, including two ‘80s records for the Ramones, Animal Boy and Brain Drain. The former included one of the band’s most topical and controversial tunes–and which caused some friction among the famously fractious group itself.

Many Nazi soldiers were buried there, including members of Hitler’s elite (and brutal) special unit, the SS. “Bonzo” is a reference to the 1951 film Bonzo Goes to College which found the then-film actor Ronald Reagan sharing billing with a chimpanzee.

It was an unusually angry and topical song for the Ramones. Guitarist Johnny Ramone, an outspoke conservative and Reagan supporter, was not thrilled with it. As a sop, it was retitled “My Brain is Hanging Upside Down (Bonzo Goes to Bitburg).” However, despite what many have said, Beauvoir says Johnny was relatively OK with it.

“I’ve read so many things online that people have said about how the song was written and who did what and what happened, and most of it is false. I thought that was pretty interesting, since it was just me, Joey and Dee Dee in a room,” Beauvoir says.

“I didn’t have any problems with Johnny. He did his parts without question and was pretty willing from what I remember. The only thing was that I had some suspended and minor chords in there and he didn’t want to play those! He did have a problem with the original name, and we changed it. But even that wasn’t a huge argument.”
Beauvoir says that his musical role-hopping comes very natural to him. “I always felt ‘Well, why can’t you do it all?’ And it’s a good thing to have your careers separated where if one thing doesn’t work out, you can do on to the next,” he says.

“After I did my solo records, I felt kind of lonely. I liked the concept of being in a band—even if I was still doing most of the stuff! But it allows you to hide a little bit. It’s not all you out front, and you don’t feel the same amount of pressure.”

As Beauvoir explains in the book, he spent many years not only recording and touring in Europe and Scandinavia, but actually living there for long stretches of time (especially Sweden and Germany).

Asked if anyone told him that his career and profile in the U.S. might have been better served if he were based on these shores, Beauvoir let out a laugh. “Yeah, my manager! And he kept [confusing] Sweden and Switzerland!”
Beauvoir says “racial issues” in his American base of operations in New York City were not good at the time. “You couldn’t get an apartment, and taxis wouldn’t stop for you—especially with my mohawk!” he explains. “So, when I got to Sweden and their arms were open and there was none of that, I was so comfortable. I think that’s why Quincy Jones and Jimi Hendrix spent time there as well.”

Beauvoir adds that it was tough to get added to radio station playlists because he says they only had so many slots for “black” artists—even rockers. Guitarist Vernon Reid of Living Colour famously promoted the Black Rock Coalition as a sort of advocacy group, though Beauvoir isn’t sure that would work out all that well.

“I know Vernon and the band. And Ed Stasium who co-produced them also produced the Plasmatics. But I think a lot of those bands had more of a fusion vibe, and that kept them off rock [playlists],” he says. “We just wanted equal opportunity. But when you try and make it a whole movement, I think it’s a little threatening.”
Beauvoir had yet another career gig as a music business executive when old boss Little Steven tapped him to be the CEO/Managing Director of Renegade Nation, his record/radio/booking media conglomerate. It was a position that he held from 2004-2010.

As he says in the book, one of his best “deals” was getting Best Buy to dedicate valuable shelf space on a special endcap to display just records from Steven’s Wicked Cool label. And then get the company to take out advertising on his Underground Garage syndicated radio show to promote it!

“I’ve always been pretty adventurous and never put rules to what you could do, and Steven liked that about working with me. I think being an artist can make you more creative in business dealings” he says. “We made some very unique deals. At the time, my mohawk was shaved, and they didn’t know who I was. They would say later ‘We thought you were a suit!’”

Jean and Little Steven onstage in 1982.
Jean Bouvier personal collection
As for the future, Beauvoir is promoting the book, has a handful of festival and special gigs overseas and is guesting on other group’s records. But he hopes to tour the U.S. after finishing up a new studio record. He also runs his own Voodoo Island Entertainment Group.

Today, Jean Beauvoir still performs with that blond mohawk, and isn’t going to give it up any more than Angus Young would ditch the schoolboy outfit or Slash the top hat. Though admits that today’s version of is a combination of real hair, extensions and other follicle assistance.

“I’ve got a little system that I’ve had for years, so it takes a minute to get it together!” he laughs. “I took a break from the mohawk for a bit, but then I just didn’t feel like myself. I lived with it for 30 years, and it became a part of me! I wasn’t feeling it with the shaved head. I was feeling like just another brown M&M!”

For more on Jean Beauvoir, visit JeanBeauvoir.com
KEEP THE HOUSTON PRESS FREE... Since we started the Houston Press, it has been defined as the free, independent voice of Houston, and we'd like to keep it that way. With local media under siege, it's more important than ever for us to rally support behind funding our local journalism. You can help by participating in our "I Support" program, allowing us to keep offering readers access to our incisive coverage of local news, food and culture with no paywalls.
Make a one-time donation today for as little as $1.