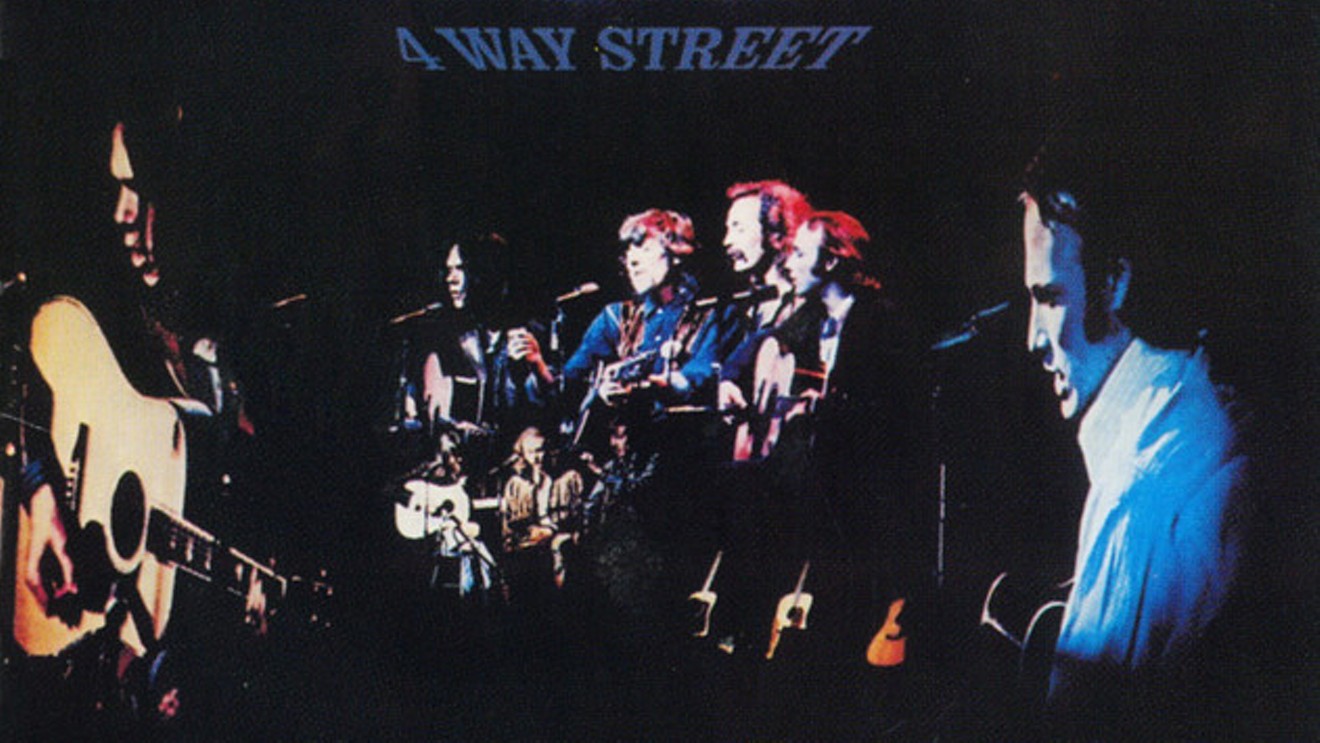 Fans of CSN (and Y) have had a long time gone awaiting an up-to-date, comprehensive bio (though writer Dave Zimmer gets credit for his 1984 book and revisions). In an embarrassment of riches, April 2 will see the release of two major tomes on the band with a name like a law firm, both penned by longtime rock journos (this one by Peter Doggett, and the other from David Browne).

In CSNY, Doggett narrows his major focus and page count on the two years that CSNY were most active as a recording and touring unit from 1968-70 (that’s the era of Woodstock, Altamont, Déjà vu, and “Ohio”). And he also sheds light on the group’s pre-formation years with previous bands the Hollies, the Byrds, and Buffalo Springfield (the book is 1/3 over before CSN even first blend their vocal harmonies). 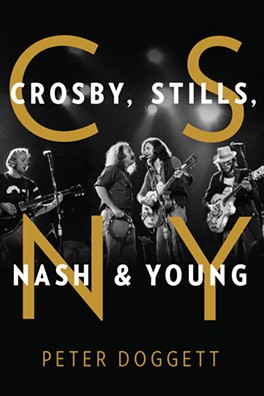 Atria Books cover
Doggett appears to not have conducted original interviews for this book, but bases his text on extensive previous sources as well as his own multiple writings and interviews with C, S, and N and affiliated parties over the past decades. He also had hours of more recent interactions with CSNY archivist extraordinaire Joel Bernstein. Many of the familiar CSNY tales and myths from the oft-battling quarter are repeated, but there are also plenty of nuggets for the diehard fan.

Like how Stephen Stills and Eric Clapton once had a drunken jam where they played “Tequila” for over an hour straight. Stills and pal Jimi Hendrix would also sometimes walk into clubs unannounced and take over the bandstand. And how the CSNY at least dabbled at turning their post-apocalyptic song “Wooden Ships” made into a sci-fi movie starring them – with intentions of having Theodore Sturgeon write the script and Stanley Kubrick direct.

Some of Doggett’s best observations here dissect the band’s onstage behavior and set lists during specific concerts. Whether jockeying for time, highlighting their own material, or at both conflict and peace with their audiences (and each other), how a CSNY concert unfolded has as much interest to a psychologist as music fans.

Houston appears a couple of times in the book, and Doggett tags a 1969 CSNY show at Hofheinz Pavillion as the public debut of “Our House,” Nash’s ode to domestic tranquility with then-girlfriend Joni Mitchell (though he was still technically married). Houston is also mentioned when, on the morning after their July 28, 1974 show at the University of Houston’s Jeppesen Stadium (though Doggett calls it “Houston University”), the band learned of the death of their friend and mentor, Cass Elliot.

He also touches on the merry-go-round of girlfriends, wives, and the songs that the quartet wrote both about their paramours and each other. The book captures the elegantly wasted California musician culture of Laurel and Topanga Canyons, where the real party houses seemed to belong to Cass Elliot and Monkee Peter Tork. Though time (and substances) have sometimes clouded memories: CSN still can’t agree to this day at whose house they first sang together at. Though they all agreed that a somewhat bizarro appearance singing the protest anthem "Long Time Gone" with an over-emoting Tom Jones on his variety show pretty much ended their desire to do any more TV appearances.


The text also shows the sometimes dichotomy between CSNY, their audience, and the culture of the day. Thus you had catered-to millionaire hippies to preach about and write tunes concerning politics, revolution, and universal love without really taking much of a risk. Graham Nash may have written “Chicago” to entice he and his bandmates to take a stand at the 1968 Democratic National Convention, but in the end none of them set foot in Windy City.

Amusingly, Graham Nash’s original take on his “Teach Your Children” sounded too much like a haughty English ballad from the time of Henry VIII. So Stills told him flat out “That sucks. You got to put a little to it, come on, put some country swing to it!” Nash – to what I’m sure is his eternal gratitude – took him up on the advice. And we also learn even more of what an insufferable egotist David Crosby was.

As for Neil Young, he sometimes remains a ghost-like presence in these pages, unable to pin down or predict, or downright contradictory. As when Doggett details the great extent he went to not be filmed during the band’s set at Woodstock and refused outright for any footage of him to be included in the movie (to the point of hiding in the dark onstage when CSN were filmed). Then, years later, Young carps to interviewers that he was “cut out” out of the movie.

There are pros and cons to CSNY’s narrow timeline focus – the group’s doings since their 1974 stadium tour are trotted by at light speed in the last short section. And some readers might wish for less straight facts and a bit more subjective observation or author viewpoint. But it’s a more than welcome addition to the band’s bookshelf (the one that’s been broken…then repaired…then broken…)
KEEP THE HOUSTON PRESS FREE... Since we started the Houston Press, it has been defined as the free, independent voice of Houston, and we'd like to keep it that way. With local media under siege, it's more important than ever for us to rally support behind funding our local journalism. You can help by participating in our "I Support" program, allowing us to keep offering readers access to our incisive coverage of local news, food and culture with no paywalls.
Make a one-time donation today for as little as $1.