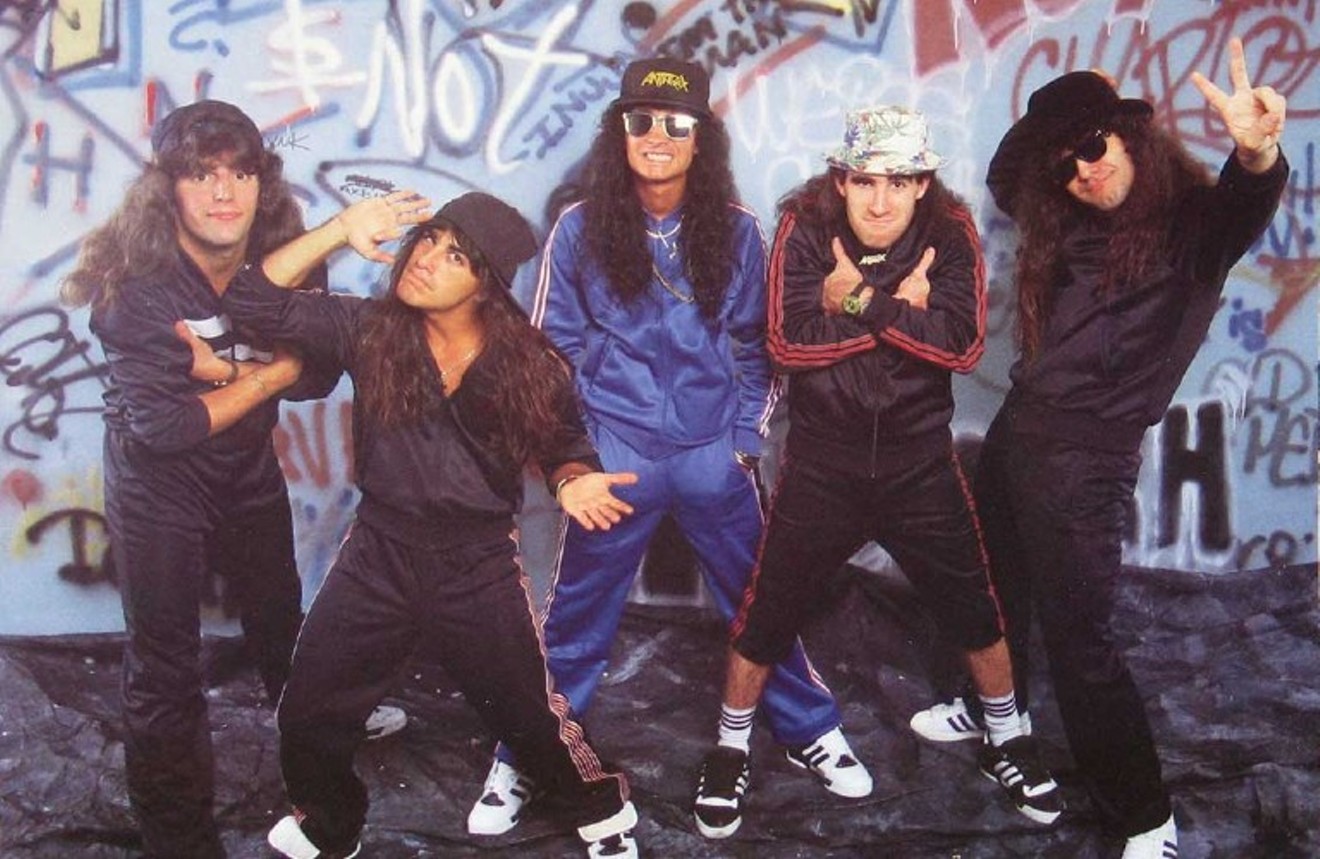 Classic Anthrax 1987 lineup for the "I'm the Man" EP: Frank Bello, Dan Spitz, Joey Belladonna, Scott Ian and Charlie Benante. Record cover
As the bassist for Anthrax during the vast majority of their career, you would expect that Frank Bello’s musical likes and influences would include the Usual Suspects like KISS, Iron Maiden and Motörhead.

But the guy who holds down the low end for one of Thrash Metal’s “Big Four” (along with Metallica, Megadeth and Slayer) readily admits that he’s also a big fan of the late, wistful singer/songwriter Jeff Buckley, stadium rock heroes U2 and even the performer that he and his wife paid $700 for concert tickets to see in 2000 at Madison Square Garden…Barbra Streisand!

Book cover
It turns out that the New York born-and-bred Bello is a man of wider tastes and talents than you’d think (He practices yoga! He’s an actor!). And that he’s to this day determined to not let the bad parts of his past shape his present or future. He tells his tale in the memoir written with Joel McIver, Fathers, Brothers, and Sons: Surviving Anguish, Abandonment, and Anthrax (208 pp., $28, Rare Bird).

The first part of the title relates to the shocking 1996 shooting murder of Bello’s brother Anthony—compounded by the fact that the case against the killer fell apart and was dismissed. And the second from when his father decided to up and leave his wife and family when Bello was 10, leaving them without any financial support, parental guidance or emotional connection.


As an author, Bello is definitely a heart-on-his-sleeve guy, and brutally honest how those two events led him to some dark times. But they also only furthered a resolve to be the man for his own wife and son that he didn’t have. An uncle in the tight-knit Italian American family who ran a deli gave him work and direction, as did his mother and grandmother.

Music fans, of course, will want to know about Anthrax. And Bello tells story after story about the band’s scrappy beginnings and ‘80s thrash peak with records like Spreading the Disease, Among the Living and State of Euphoria. Then the era of grunge and Nu Metal when the band fell out of favor, only to come back as sort of “elder statesmen” for Thrash.

And though Bello was not an original member, he got on board quickly (partially via drummer Charlie Benante, actually Bello’s uncle despite their closeness in age), only leaving the band for a brief period after tensions led him to join Helmet.

Bello’s commitment to music even as a young man was all-consuming. How else to explain that he chose not to accompany a group of neighborhood Tony Maneros for a night of drinking, dancing and girl chasing after he got paid on a Friday night. The reason? The Rush album Moving Pictures was coming out the next morning, and he wanted to be first in line at the record store.

Early on, Bello writes about how obsessed he was with KISS, to the point that he and his friends would practically stalk the band (out of their trademark makeup) to management offices and recording studios around New York. KISS bassist Gene Simmons (who also provides the book’s foreword) took a special shine to the ragtag group, spending time with them and even memorizing their names. It’s a fan service he’s never forgotten, and that he tries to extend to Anthrax fans today.
Iron Maiden’s Steve Harris did other kindnesses to his fellow bass player that stuck with Bello (whose most famous bass line is likely the intro to their unlikely cover of Joe Jackson's "Got the Time"). And he offers plenty of stories of hanging with or just observations on others in the club like Geddy Lee, Lemmy, Adam Clayton, Jr., Geezer Butler, Paul McCartney, and Cliff Burton.

In fact, Anthrax was on tour in Sweden with Metallica when the latter band’s bus crashed in 1986, killing Burton at the age of 24. Both groups were shattered, and Bello writes of how he and Benante walked the streets trying to console an inconsolable James Hetfield, Metallica’s singer/rhythm guitarist.

There are other stories of touring with bands like Pantera (on which there should have been several AA counselors), but they tend to be brief. And other then some extra insight to his relationship with Benante, there’s surprisingly little about Bello’s thoughts about and interactions with the rest of his Anthrax bandmates over the years. Or much about the group’s songwriting/recording process that fans would want to read more of.

In the end, Fathers, Brothers, and Sons is a quick read. But at even its brief length, Bello tells a fascinating and open story of his journey so far in music and life. And it may not be too late for him to get that one-off gig with Streisand.
KEEP THE HOUSTON PRESS FREE... Since we started the Houston Press, it has been defined as the free, independent voice of Houston, and we'd like to keep it that way. With local media under siege, it's more important than ever for us to rally support behind funding our local journalism. You can help by participating in our "I Support" program, allowing us to keep offering readers access to our incisive coverage of local news, food and culture with no paywalls.
Make a one-time donation today for as little as $1.