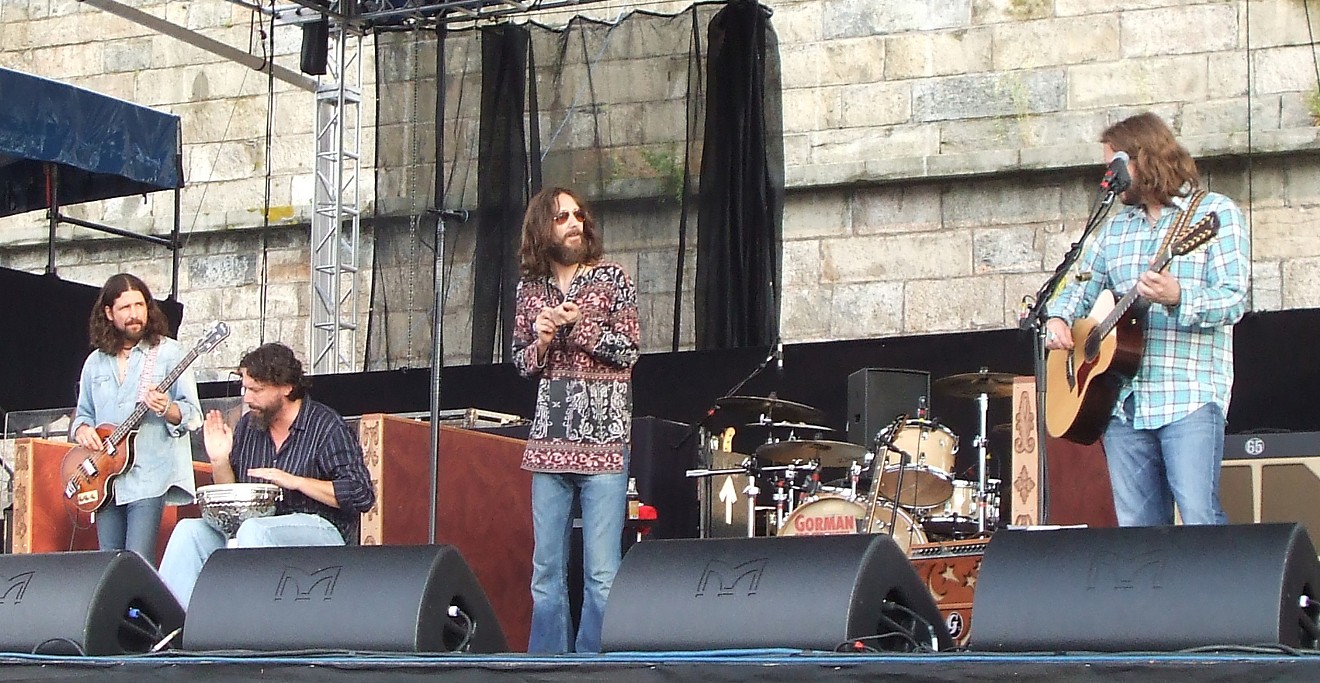 The Black Crowes at the 2008 Newport Folk Festival. Pictured: Sven Pipien, Steve Gorman, Chris Robinson, Rich Robinson (not shown: Luther Dickinson and Adam MacDougall). Photo by DickClarkMises/Wiki Commons
Through the entire career of the Black Crowes — from when they were known as Mr. Crowe’s Garden, to their 1990 hit debut record Shake Your Moneymaker, up until their last (and seemingly final) live show in December 2013 – even their most diehard fans have had a lot of questions.

About relations between the seemingly ever-battling brothers Chris and Rich Robinson and the rest of the band. About the breakups, reunions, hiatuses, and abrupt lineup changes. The massive radio hits ("She Talks to Angels," "Jealous Again," "Hard to Handle," "Remedy," "Sting Me"), and the most obscure tunes. And the shifts in musical directions, record companies, and “lost” albums and projects. But to date, there has not been any substantive book about the group and their music. 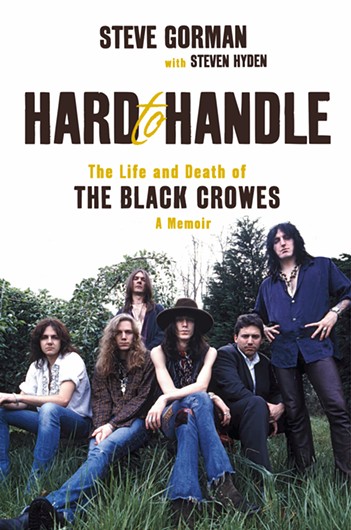 The Black Crowes around the time of the release of "The Southern Harmony and Musical Companion": Marc Ford, Rich Robinson, Ed Harsch (standing), Chris Robinson, Steve Gorman, and Johnny Colt.
Da Capo Press book cover
That all changes next week with the release of drummer Steve Gorman’s insightful and explosive memoir, Hard to Handle: The Life and Death of the Black Crowes (Da Capo Press). Written with music journalist Steve Hyden, it seems almost every page has some sort of jaw-dropping revelation or anecdote that explains why the Black Crowes are probably – next to the Replacements – the most self-sabotaging band in rock history. And Gorman was there from the very beginning to the last downbeat.

“The way the band ended, that was never possible to sit right with me,” Gorman says. “We talked about doing one last tour and shaking hands at the end and saying goodbye. And it made sense to write that final chapter. But Chris took that away from everybody. And not just the band, but also the crew and the fans. It’s hard to watch somebody control a narrative that is complete bullshit.”

What Gorman is referring to is singer Chris Robinson’s widely-reported demand that he receive 75 percent of the band’s income to do the tour rather than the equal third he, guitarist Rich, and Gorman would normally receive as co-founders (the rest of the band were salaried). And he would also get the rights to the band’s name. Gorman and Rich Robinson declined that deal. And that was the end.

Despite the likeliness that the book will drop an atom bomb in Black Crowes fandom, Gorman says he’s not trying to stir things up nor write a definitive history of the group, but produce a memoir from his perspective. He was spurred to do the project after the 2016 death of Crowes keyboardist Ed Harsch, and notes that the original draft he produced with Hyden’s help was about three times as long as what readers will see.

“We were all just involved in a real chaotic, very tense and dysfunctional unit. But I kind of think it’s funny, absurd. I’m surprised we made it six months much less 27 years!” he says. ““When I decided to play with Chris and Rich, I knew I was just going to end up in the middle between them. But I did it anyway.”

And indeed, according to Gorman, in incident after incident, the Robinson brothers don’t exactly cover themselves in glory in non-musical areas. Singer Chris is a manic, overbearing, egomaniac whose gentle hippie persona cloaks a cold hard capitalist who also wanted credit and insisted on control.

Quick to rage and fight, Gorman relates that Chris would seem to go out of his way to piss off people who could help their career path, and make questionable decisions on the name of “art.” As when he insisted that the cover of Amorica – the follow-up record to the hugely successful The Southern Harmony and Musical Companion – feature an old Penthouse picture detail of a model’s vagina covered by an American flag panty, with dark pubic hair visibly poking out.

And no matter what success the Black Crowes did achieve, Gorman says that it never seemed to satisfy the wiry front man. “[Chris’] story is of getting everything you wanted and still being miserable…that’s Showbiz Trope 101,” he offers. “What really sucks is that Chris, instead of going ‘I have all these things I wanted and I’m still not happy, so that means there’s a problem with me,’ he would just assign the blame to success.”

As for guitarist Rich, he comes across as an often dour, uncommunicative, sour puss. Only coming to real life when he and Chris were battling over things both miniscule and huge.

“Their nonsensical sibling rivalry infiltrated every aspect of the band’s existence,” Gorman writes. “Everybody else in the band and crew were pulled onto one side or the other, despite our best intentions to stay neutral and do whatever to took to keep the whole thing moving forward. It was exhausting.”

Gorman also writes much about other band members and record company executives, giving particular praise to producer George Drakoulias and manager Pete Angelus. And there is plenty about the making of the band’s records and live shows. He is aware that his sometimes brutal evisceration of the Robinsons are big narrative takeaways, but insists this is no hit-piece or a tome to settle scores. “There’s no score to settle, only a story to tell,” he offers. “And it’s my story.”

He has not sent either Robinson an advance copy of the book, nor, he says, does he particularly care what they think. “The truth is Chris hasn’t given two shits about anything I’ve had to say in forever. It’s more a question [for me] of ‘How dare he say anything’ rather that what I say. In his mind, he is and was the Black Crowes and who the hell is anyone – even his own brother – to talk about it,” he says. “They can’t refute anything I say in the book – it’s all true.” Gorman also doesn't let himself off the hook for sometimes bad behavior and actions.


Turning back to the music, when asked which of the band’s studio albums he would place in the hands of a 15-year-old and say “This is the Black Crowes,” the answer comes fast.

Now that Hard to Handle is coming out, the Nashville-residing Gorman is going to concentrate on his current band, Trigger Hippy, and their upcoming debut LP. A former longtime sports talk radio host, he’s now got a nationally-syndicated classic rock radio show called “Steve Gorman Rocks” on the Westwood One network.

But it’s his days behind the drum kit for the Black Crowes that will largely define him both in what he’s accomplished musically and how he’s perceived. Gorman says that finishing the book has allowed him to “dump that file” from his mind, but it’s never far from recovery. As when he was approached by an employee at the radio station who quietly thanked him for the music and mentioned that he’d seen the Black Crowes 44 times.

“Forty-four shows! I can’t think of any band I’d want to see that much!” Gorman marvels. “But I’m more and more aware each passing year the mind-boggling amount of effort and time that people have put into supporting the Black Crowes. And I’m very appreciative of that.”
KEEP THE HOUSTON PRESS FREE... Since we started the Houston Press, it has been defined as the free, independent voice of Houston, and we'd like to keep it that way. With local media under siege, it's more important than ever for us to rally support behind funding our local journalism. You can help by participating in our "I Support" program, allowing us to keep offering readers access to our incisive coverage of local news, food and culture with no paywalls.
Make a one-time donation today for as little as $1.