The complicated Jan Berry of Jan & Dean not only sang surf music - he actually surfed! Photo by Jill Gibson/Courtesy of Bob Merlis M.F.H.
The old adage goes that high school is the place to experience “the best years of your life.” And while that’s hardly a universal feeling, campuses are definitely the breeding ground for lifelong personal friendships, professional partnerships, and that last precipice between childhood and adulthood where you could “try something.”

In the late 1950s and early 1960s, a cluster of high schools in the Los Angeles and Hollywood area seemed to be a breeding ground for students who would go on to have a great impact on California music: Jan & Dean, Nancy Sinatra, Herb Alpert, and members of the Beach Boys answered class roll calls. As did those who became forces in the music industry like Lou Adler, Kim Fowley, and Terry Melcher. Plus Kathy Kohner, the real-life inspiration for fictional beach girl Gidget, and one knucklehead who decided to kidnap Frank Sinatra, Jr. 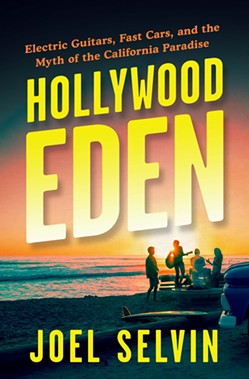 “The idea that all these people were going to high school together and knew each other was kind of the spark that made me want to do this book,” Selvin says. “And isn’t high school the quintessential American experience where we became most socialized and prepare ourselves for whatever adulthood is?”

Of course, as Selvin points out, these were high schools for mostly white kids from well-off families with larger-than-usual percentage of parents in show business. Take the prom that University High School held for the class of 1958: entertainment was provided by the Nelson Riddle and Dick Stabile Orchestras with singer Keely Smith. And Nancy Sinatra’s dad Frank dropped by with friend Sammy Davis Jr. to perform a mini concert, all while one of LA’s top DJs, B. Mitchell Reed, hosted.

As an adult, Nancy Sinatra would have her biggest hit and enter pop culture consciousness with the proto-feminist anthem “These Boots are Made for Walkin’.” It’s from producer/songwriter Lee Hazlewood – in an effort to break her out of her innocent schoolgirl image to date.

He also wanted something grittier and more commanding from the performer, who had already been married and divorced by this time. “Bite the lyric,” Selvin quotes Hazlewood as saying during the sessions. “Don’t sing it like a child. Sing it like you’re a sixteen-year-old girl who fucks truck drivers.” One can hardly argue with the results.

And while these teens and young adults were actually living the California Myth, that itself was relatively new at the time. Selvin mentions that the age of jet travel was in its infancy, so California was somewhat remote. But that the attraction of the state (and Disneyland) was being pumped into tens of millions of livings rooms each week via Walt Disney TV programs. It was a paradise that even non-Americans like a young Keith Moon, growing up on London, became obsessed with years before he started drumming for the Who.


“Those surf records that Keith Moon was listening too were made by the people who lived them or were around what they were about. Jan and Dean were surfers and pushed the whole California coast thing,” Selvin says. “They were going to be different from the Italian guys on American Bandstand. California had this magic to people. Then the Gidget movie came out, then the music, then it started to really break pop culture in this bright and vivid way. A California of the mind.”

Of course, the music was everywhere. But while Capitol Records was sort of the sole big company firmly planted in the state, scores and scores of smaller labels – often run by a combination of DJs, organized crime figures, or ambitious music men – proliferated.

That’s how Jan and Dean (“Surf City,” “The Little Old Lady From Pasadena”) could literally record something in their garage goofing around with some high school pals, and then see an actual record appear in shops within weeks. Some operated out of shady storefronts. And they all stole and borrowed personnel, artists, and even songs from each other. 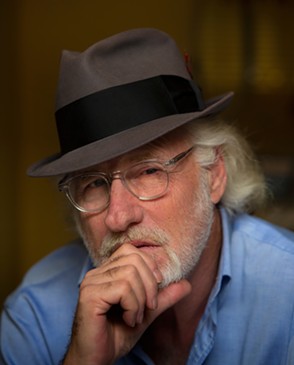 Author Joel Selvin.
Photo by Deanne Fitzmaurice/Courtesy of Bob Merlis M.F.H.
Three figures really jump out vividly in Hollywood Eden, not the biggest names written about by far. Kim Fowley was something of a chameleon Zelig, scratching for every opportunity as a songwriter, producer, manager, performer, criminal hustler, and scenester, literally sleeping wherever he could (Though his greatest fame would come in the ‘70s as the controversial Svengali for the Runaways). However, Fowley’s legacy both during his life and afterwards did not cover him in glory.

“Kim Fowley is pure Hollywood, and a lowlife. He had songwriting and performing credits, but no apparent talent. He’s a hustler who managed to get his fingers into stuff and stir it up,” Selvin says.

“In fact, the only person I talked to during the writing of this book who even liked Kim Fowley was [Beach Boy] Bruce Johnston. I knew Kim. He was a creep. But he could put things together and make them happen.”

Selvin spent interview time with Jill Gibson. Music nerds know her as the singer who briefly replaced Michelle Phillips in the Mamas and Papas after leader John Phillips forced out his wife in a fit of jealous rage. At the time, Gibson was the girlfriend of band producer (and Kim Fowley rival) Lou Adler. In fact, Gibson’s face was substituted for Michelle’s on a pre-production cover for the band’s smash hit second LP.

Previously, Gibson was the girlfriend of Jan Berry from Jan and Dean, as well as a model and performer. She left Berry when she discovered him with two women—in their shared house while he thought she was asleep. But she still stood by him and kept constant vigil at the hospital after Berry suffered horrific, life-altering injuries in a 1966 car crash around the actual stretch of road on Sunset Blvd. already dubbed “Dead Man’s Curve,” after the Jan & Dean hit! Friends and musical collaborators Jan Berry (standing) and future Beach Boy Bruce Johnston fix a flat tire.
Photo by Jill Gibson/Courtesy of Bob Merlis M.F.H.
“I really wanted to bring Jill’s story into the foreground, because I knew it would be something that women would really understand, her role in all this. It’s easy as a male not to see it, because it was such a boy’s club,” Selvin offers.

“But it’s illustrative of that time how she [was viewed and treated]. And as far as the Mamas and Papas, nobody can tell who is singing what on that second album. Jill was recorded singing on six or seven of those tracks.”

Finally, there’s Jan Berry himself. A complicated and mercurial man, he was pursuing a full-on medical degree in school while also a musical career, and his ambitions in the studio outstripped the simple songs Jan & Dean were known for. He later spearheaded their recordings of blatant right wing/pro-Vietnam war material. But Selvin is no more enamored of him personally than Kim Fowley.

“I don’t think Jan Berry was a good person. I think he was very self-consumed, had conditional values, and just a punk as a teenager. He was into fast cars, fast living, and abusing people, living life like there was no tomorrow,” Selvin says. “But his energy was astounding to people who knew him. I don't think he slept much. Jill said he was always active. An amazing guy, but tortured in some weird, inner ways. And even if he didn’t crash that car, his struggle against [musical] obsolescence would have been lost.”

That’s because as the early ‘60s turned to the middle, then later part of the decade toward the era of Woodstock, poppy music about surfboards and daddy’s car and teen romance was out in favor of a harder or more experimental sound, blues-based rock, and performers who wrote all of their own material.

Like its Biblical counterpart, “Hollywood” Eden was not meant to last. And while the sun does set on it by the end of Selvin’s insightful book, at least the stories, the magic, and (most importantly), the music have always remained.
KEEP THE HOUSTON PRESS FREE... Since we started the Houston Press, it has been defined as the free, independent voice of Houston, and we'd like to keep it that way. With local media under siege, it's more important than ever for us to rally support behind funding our local journalism. You can help by participating in our "I Support" program, allowing us to keep offering readers access to our incisive coverage of local news, food and culture with no paywalls.
Make a one-time donation today for as little as $1.