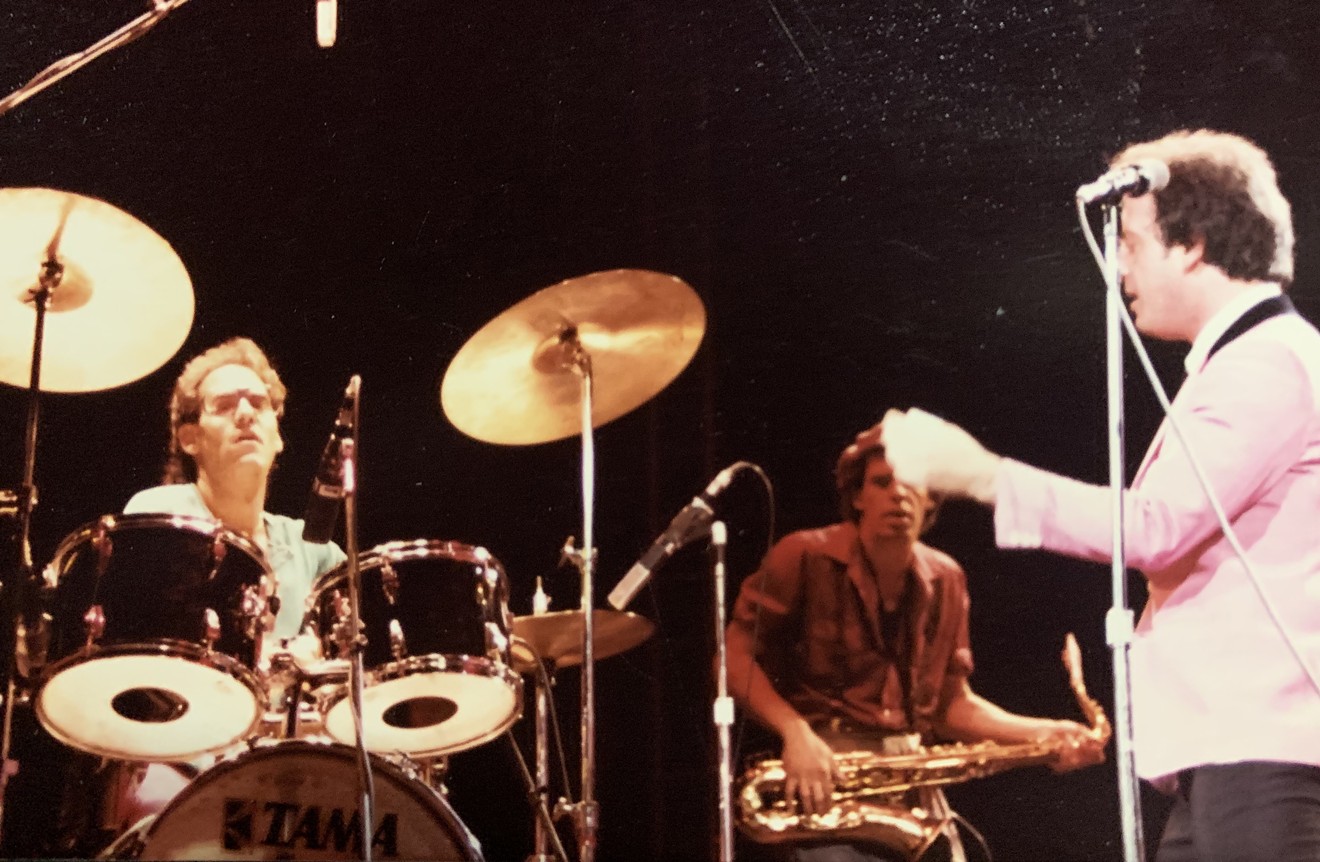 Liberty DeVitto, Mark Rivera (sax), and Billy Joel on 1980's "The Nylon Curtain" tour. Photo by Liberty DeVitto/Hudson Music
For nearly 30 years, he provided the big backbeat behind Billy Joel as a core member of his band for hundreds of concerts around the world and on a string of hugely successful records. The two also formed a deep personal relationship, enjoying good times and the vast fruits of their success. Not too bad for a guy whose sixth grade music teacher once told him “Put down the sticks – you’ll never do anything with them!”

But it all came to an abrupt halt when Liberty DeVitto discovered that he wasn’t invited to Joel’s (third) wedding in 2004. And when the Piano Man went back on the road, DeVitto’s phone remained silent. Lawsuits were filed about royalties and song credits, and the two only communicated through lawyers. But a surprise late turn makes a nice ending to DeVitto’s new memoir, Liberty: Life, Billy and the Pursuit of Happiness (290 pp., $24.99, Hudson Music). 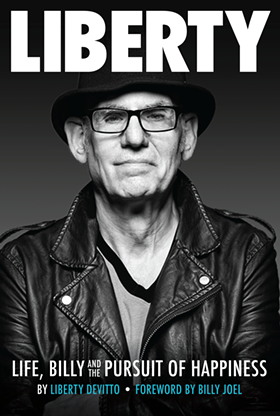 Hudson Music book cover
While his relationship with Joel and the music they made provides the crux and the heart of the book, there’s plenty more to his story. Born to a large, boisterous Italian family in New York, DeVitto’s musical “a-ha” moment came like so many others of his generation: On the evening of February 9, 1964 when the Beatles played for the first time on the Ed Sullivan Show.

“I was 13 and I didn’t really like Elvis. I liked the black R&B music and Dion. And when the Beatles came on, they could have come from Mars. Nobody knew where Liverpool was, they had these amazing accents, and nobody looked like them!” he laughs. “And they were recycling [American] black music. But nobody had seen anything like it!”

DeVitto began playing with several bands and, despite being underage, found work in clubs in and around Long Island. Occasionally, he’d run into another gigging teen musician – one Billy Joel – along with Russell Javors (guitar), Doug Stegmeyer (bass). The drummer later spent time playing with Mitch Ryder and the Detroit Wheels and a group called Topper while trying to get his career kickstarted.

Meanwhile, Joel had recorded one flop album (Cold Spring Harbor), left the biz, moved to LA, then returned with two that barely did any better (Piano Man, Streetlife Serenade). So it was make-or-break for 1976’s Turnstiles, by which time Joel had returned to New York and coalesced his core concert and studio band that included DeVitto, Javors, Stegmeyer, and Richie Cannata (sax).

The next album was originally slated to be helmed by George Martin…the Beatles’ George Martin! But when the Englishman insisted on using studio musicians instead of Joel’s own band, Joel turned him down. Nevertheless, The Stranger became their huge breakthrough. And with the addition of David Brown on second guitar, Billy Joel and his band went on to worldwide success for more than two decades. 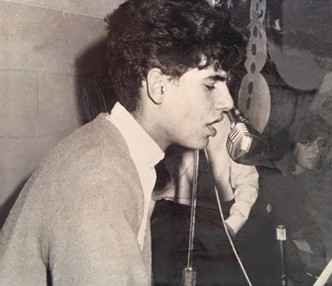 Liberty DeVitto performing at his Seaford High School, 1965.
Photo by Liberty DeVitto/Hudson Music
“Billy said ‘Love me, love my band.’ He wanted the same guys on the record and touring,” DeVitto says. “Luckily, the next guy in line to produce was Phil Ramone, and he was fantastic. And an even better fit for us.”

Liberty breezily takes the reader through those glory years, and DeVitto provides an album-by-album breakdown of some of the songs, including his contributions to them. “If he [Billy] was the father of those songs, and the songs were his children, then I was the uncle. I taught them how to walk,” he writes.

There are plenty of new nuggets for fans, as well as amplifications on stories. It’s been long known that early versions of The Stranger’s “Only the Good Die Young” featured a reggae beat.

But DeVitto says studio visitor Paul Simon’s suggestion that a song with such heavy lyrics should have lighthearted groove altered that (the Catholic Church’s subsequent “banning” of the song only helped its sales). Oh, and DeVitto was so hung over, he passed out in a broom closet right after recording it.

Likewise, they were going to leave the ballad “Just the Way You Are” (written for Billy’s then-wife Elizabeth Weber), off because Joel and the band felt it was too mushy. But pleas from singers Linda Ronstadt and Phoebe Snow that women would love it made them change their minds. It became one of Joel’s most famous songs, winning Grammys for Record of the Year and Song of the Year. And gave them a new fanbase.


“When we went on the road, we were playing a hall in Washington, D.C. And when we walked out, Billy just got mobbed by these girls. That’s when I knew things had changed,” DeVitto recalls. “I was on the outside of the circle and he was on the inside. He’s short, so he’s kind of on his tip toes looking over the girls’ heads, looking at me like ‘Wow, this is really cool!’.”

Of all the albums, DeVitto says that his favorite to record was 1984’s An Innocent Man, a smash whose entire sound harkened back to a previous era of rock and roll. “When we started recording, Billy only had ‘Tell Her About It’ and ‘Easy Money.’ The rest were all created in the studio,” DeVitto recalls. “He had some ideas and the band had some ideas. If we played it and it really swung, he’d go home and finish the song. I tried some different drums sounds on that as well.”

He notes that the band would be in the control room and put on the Drifters and the Four Seasons, and Joel would say he wanted to write a songs like that. That’s how he came up with the “An Innocent Man” and “Uptown Girl.” 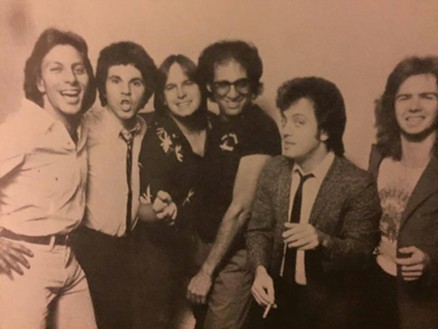 The Billy Joel Band in 1978: Richie Cannata, Russell Javors, Doug Stegmeyer, Liberty DeVitto, Billy Joel, and David Brown.
Photo by Liberty DeVitto/Hudson Music
There’s also sections about the highs (and lows) of life on the road, DeVitto’s own struggles with fame, drugs, and alcohol. And the band’s eye-opening 1987 trip to play a six huge shows in the Cold War thawing-out Russia.

DeVitto once offered peanut butter to one of his government “minders” who, having never tasted it before, spit it out in disgust.

The book doesn’t really go into the animosity and estrangement between DeVitto and Joel went through post-2004. And maybe that’s for good reason, because the book ends with quite a surprise.

DeVitto had knee surgery in 2019, and recuperation gave him time to think. He had also started performing with former bandmates Russell Javors and Richie Cannata and others in the band The Lords of 52nd Street, whose set list is largely from the Billy Joel catalog.

“When I was relearning the songs, I started to fall in love with them again, and all I could remember was all the good times we had together,” he says. “I had the music, but not the guy whose eyes I looked into for 30 years. That was the only piece that was missing.”

So he offhandedly emailed Joel in February of this year with caveat “it’s time for the piano and drum feud to be over,” and proposed a meeting over coffee or breakfast. Less than 24 hours later, Joel responded he’d like to do just that, as both were disappointed in how their relationship had ended. So they met one morning in a Florida diner where DeVitto had just played with the Lords and snowbird Joel was living.


“It was like it was at the beginning. We’re in a diner, I’m eating pancakes, and he’s eating bacon and eggs,” DeVitto laughs. “And we didn’t talk about business or the bad stuff that happened between us. It was mostly about our children and our wives, people we had knew and lost, and what we had planned for the future.”

DeVitto’s book was already written, but in a surprise development, Joel agreed to write the forward. And the drummer added an epilogue, which includes a picture of the old friends smiling together in the diner. DeVitto won’t divulge more specifics on their conversation, but he did tell Andy Greene for Rolling Stone that it’s possible all the bad blood was due to a simple misunderstanding.

As of now, Liberty DeVitto is happy to have his life story out and to talk to people about it. But his latest interest might take a more, um, scientific turn.

“I’m building a lab in my mother-in-law’s basement and I’m going to cure this virus so the Lords can get out and play again!” he laughs. “We’ve already done one of those parking lot gigs and we’ve got another one planned. You do what you have to!’
KEEP THE HOUSTON PRESS FREE... Since we started the Houston Press, it has been defined as the free, independent voice of Houston, and we'd like to keep it that way. With local media under siege, it's more important than ever for us to rally support behind funding our local journalism. You can help by participating in our "I Support" program, allowing us to keep offering readers access to our incisive coverage of local news, food and culture with no paywalls.
Make a one-time donation today for as little as $1.