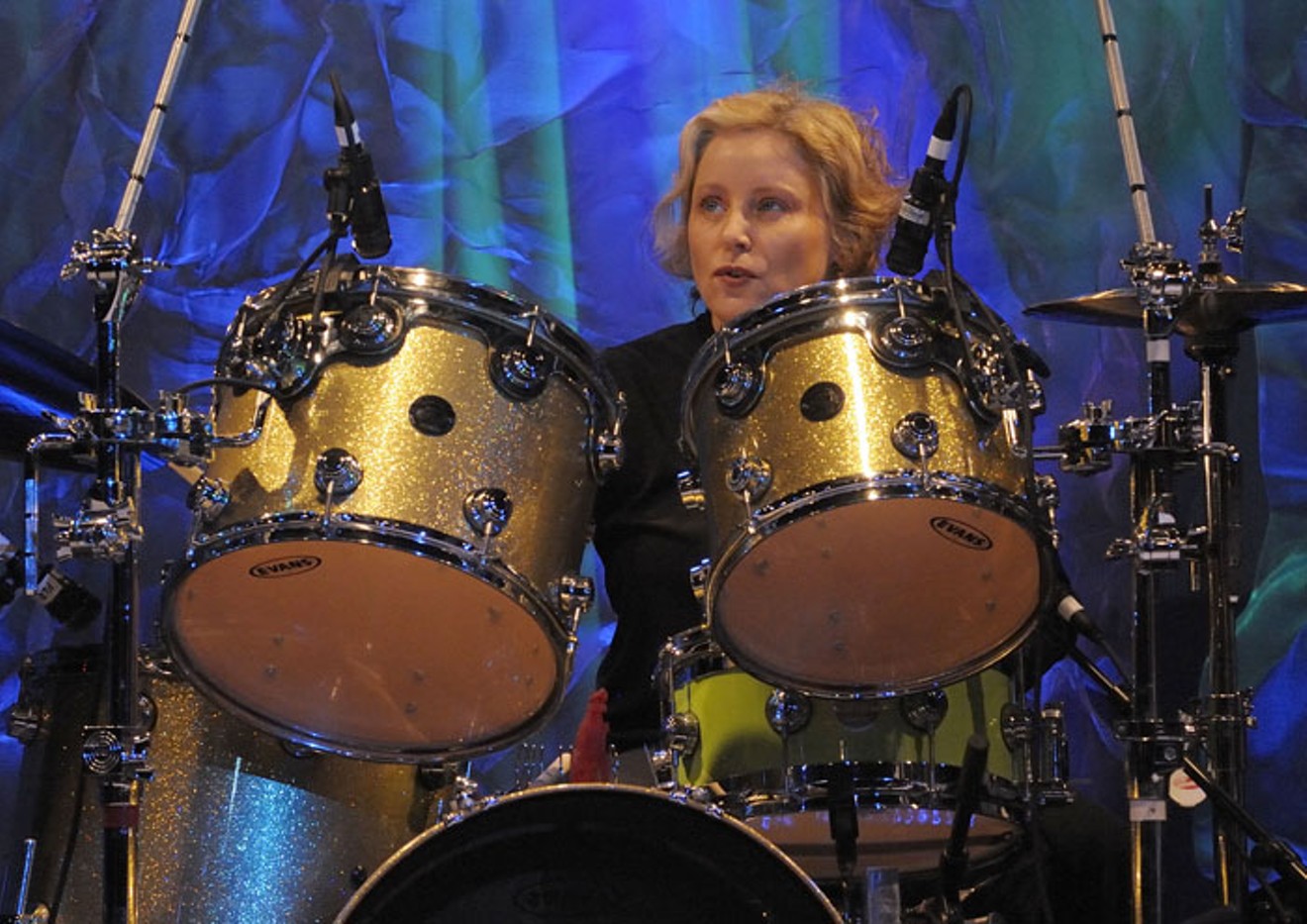 Gina Schock onstage with the Go-Go's in recent years. Photo from the Collection of Gina Schock/Courtesy of MAD INK PR

Almost as much as music, Gina Schock has had a love for an interest in photography for her entire life. And that includes before, during, after, and again during her career as the drummer for the Go-Go’s.

Backstage, onstage, at house parties and in various airports and hotels, Schock always kept her camera clicking, while also appearing in those taken by others. In the process, she and the rest of the band mugged for each other, and were often caught in the company of some fairly famous faces. book cover
Scores of those casual photos—along with biographical text from Schock and remembrances from her bandmates and famous friends—come together in her book out on October 26, Made in Hollywood: All Access with the Go-Go’s (240 pp., $40, Black Dog & Leventhal).

“I love photography. I have a lot of framed photographs on my wall at home, and I’ve always been a very visual person. Even in 1979 when I was just a kid traveling across the country, I had an Instamatic camera. And when I made a little money, I got a Canon 35 mm. And then I got into Polaroids,” Schock says from her home in California.

“A photograph tells you everything you need to know about moment in time. You look at it and you think and you remember exactly what was happening and who you were with and where you were. I’m excited and proud and happy to put this out. I’m in grateful mode.”

While her bandmates bassist Kathy Valentine and singer Belinda Carlisle have already written more prose-heavy memoirs (no word if guitarists Jane Wiedlin or Charlotte Caffey will get into the book game as well), Schock says that the much more photo-heavy format works better in her case.

In addition to the Go-Go’s, the snapshots show a Who’s Who of early ‘80s music and entertainment from the Police, Joan Jett, David Bowie, Billy Joel, Chrissie Hynde and Robert Palmer to Bill Murray, John Belushi, Christopher Reeve and even country stars like Johnny Cash, Dolly Parton and Tammy Wynette.

What’s refreshing is that they’re all very casual and often showcase a relaxed and goofy charm that no posed photo could deliver.
click to enlarge 
“It was a group of friends, we just happened to be the Go-Go’s. And everybody would do whatever I asked. They were perfect subjects!” Schock says. That includes the band in various nutty poses, with props, and in one series documenting a, uh, live “birth” of one of their own.

Tracking down the photos (most of which have never been published) wasn’t as simple as pulling down a carefully-curated scrapbook of images encased in protective mylar. Schock says they were culled from battered boxes in closets, underneath furniture and in storage facilities.

One of the photos takes on a more recent significance, from a sole October 1981 gig in Rockford, Illinois where the Rolling Stones tapped the band to open for them. Posed with the Go-Go’s are then-bassist Bill Wyman and the recently-deceased drummer Charlie Watts. Not surprisingly, skin thumper-to-skin thumper, it’s that encounter that Schock may treasure above all others.

“First of all, it was a once-in-a-lifetime opportunity to open for them. We were knocked out and so excited,” Schock recalls. “I idolized Charlie Watts. I could hardly speak to him! But he was so sweet and such a gentleman and everything I’d hope he would be. Then I got to sit on his drum kit and fool around. I was in heaven!”

A couple of other photos are from backstage at a December 1981 taping of TV’s Solid Gold that featured the Go-Go’s, KISS in full makeup and costumes and hairy-chested host Andy Gibb. Quite a mixture of musical styles and looks. But if you’re thinking Shock would roll her eyes at the memory, you’d be wrong.

“Oh my god! I loved doing Solid Gold. We probably did that show more than any of the others!” she says without a hint of snark. “The thing I remember the most is that they used to make you wear this makeup that made you look orange, though I guess it didn’t pick up on the camera. And of course, the Solid Gold Dancers doing their interpretation of your song around you while you’re playing it. It was a blast.”
The Go-Go’s have an extremely important career milestone coming up later this month when they’ll be onstage in Cleveland as inductees into this year’s class at the Rock and Roll Hall of Fame. The band will give speeches and are expected to play a three-song set.

The Go-Go’s are the most commercially successful all-female band ever, and still the only one to have a No. 1 album with their debut Beauty and the Beat (it eventually surpassed the Ghost in the Machine from the Police, for whom the Go-Go’s had opened for on a portion of that tour). Their hits include “Our Lips are Sealed,” “We Got the Beat,” “Vacation,” “Head Over Heels,” “Turn to You” and “Get Up and Go.”

They’ve had their Rock Hall champions for years. But Schock (and the rest of the group) feels it was last year’s career-spanning documentary The Go-Go’s, directed by Allison Ellwood, that put the band back on people’s radars and Rock Hall members’ ballots.
“I gotta tell you, the documentary was the kick in the ass that the general public and the industry needed to recognize this band again and have a real look inside. Allison did an incredible and beautiful job, and we all loved it,” Schock offers.

When it’s suggested that many casual Go-Go’s listeners only know the more pop commercial hits and nothing about their much more punk rock roots, she agrees.

“At heart, we’re a punk band, and we always will be. And in our live shows, we really rock out,” she says. “The way we play, we’re not really great musicians or trained musicians, but it works for this band. The punk era was a time when everybody picked up their instruments whether they could play or not and just had a good time with their friends. And lot of bands that came out of that are still around.”
click to enlarge

Fellow rocker Joan Jett with a brunette Schock.
Photo from the Collection of Gina Schock/Courtesy of MAD INK PR


Schock carries that feeling over with an answer to the question: If she had a Magic Induction Pass to get any other group into the Rock Hall. Who would get the go-go sign? She first offers the names of the Clash and the Ramones (who are both already in). She’ll have to try again.

“Shit, let me just think here!” she laughs. “OK, it’s got to be X. They were an incredible band and still are. We were in awe of them when they played. They were like a hurricane coming in,” she says of one of the most critically acclaimed acts of the original L.A. punk scene. “So powerful, and all the songs had really great hooks.”

Of course, today anyone reading this can immediately pick up their phone and within minutes download the entire discography of X. Schock says that ease of access to any music is helpful for people of any age group to discover older acts, but something is lost in the process as well.

“You just push a button and get whatever you want. But [younger people] need to learn how to go to a record store and dig through vinyl. It’s coming back!” she laughs. “There was something great about going to a record store and seeing all the latest releases. And the artwork. Now, it’s all streaming.”

It’s clear leafing through Made in Hollywood that the five Go-Go’s have a deep affinity for each other (even though later years would bring quittings, breakups and lawsuits). All that’s settled now. They released a new song to go with the documentary (“Club Zero”), have some live dates in California toward the end of this year, then a UK tour supporting Billy Idol in 2022.

Finally, when Go-Go Kathy Valentine spoke with the Houston Press last year for her memoir All I Ever Wanted, she likened the chemistry of the classic five member lineup to a really good cake: Take one ingredient out, and it just doesn’t taste the same. Her fellow rhythm section member agrees.

“That’s a great analogy. When the five of us get into a room together, it just…starts!” she laughs. “And then when we pick up our instruments, it goes up ten levels. So by the time we’re about to play, we’re ready to explode! And that doesn’t happen with anybody else. It’s a magical thing. It just is.”
KEEP THE HOUSTON PRESS FREE... Since we started the Houston Press, it has been defined as the free, independent voice of Houston, and we'd like to keep it that way. With local media under siege, it's more important than ever for us to rally support behind funding our local journalism. You can help by participating in our "I Support" program, allowing us to keep offering readers access to our incisive coverage of local news, food and culture with no paywalls.
Make a one-time donation today for as little as $1.