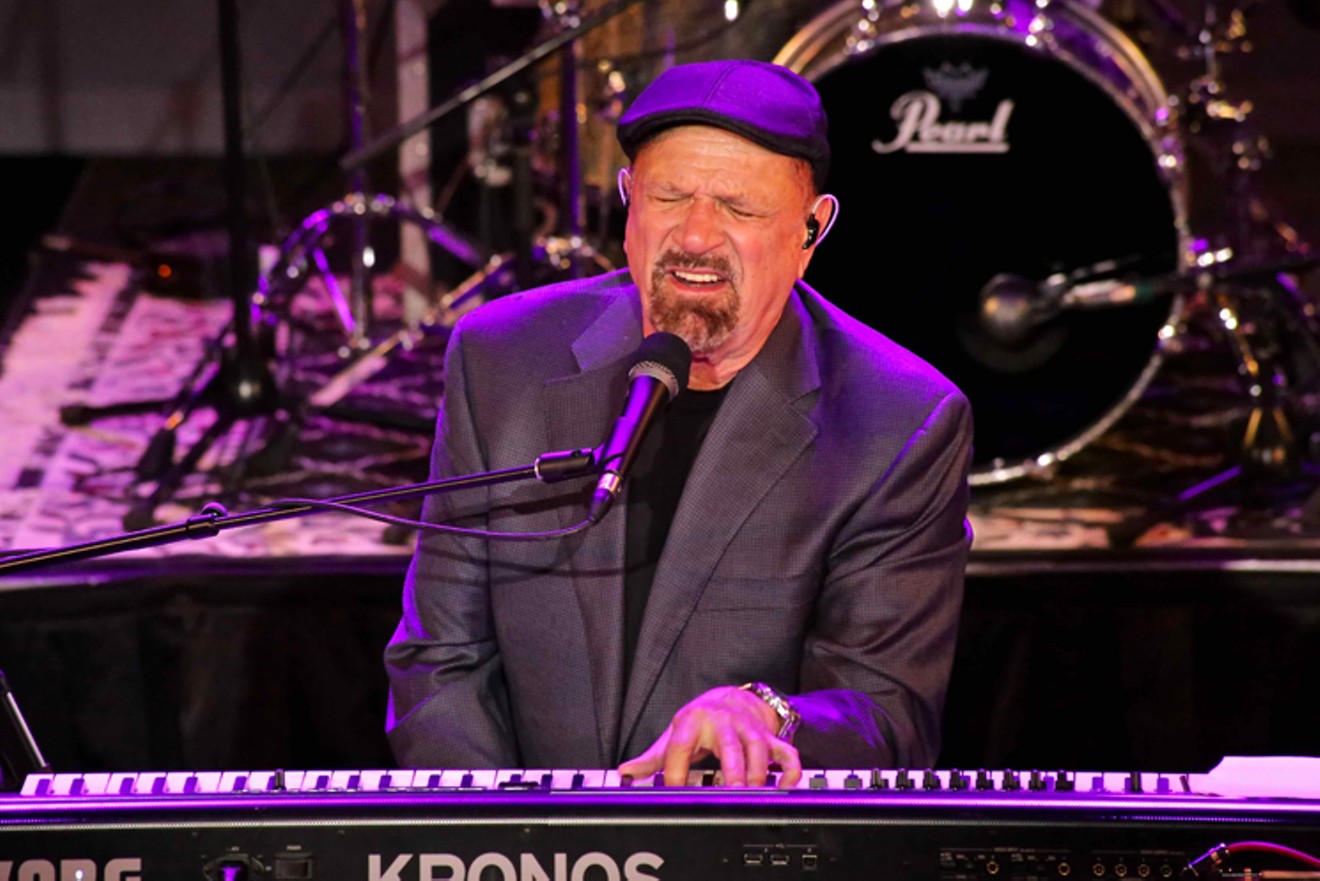 Felix Cavaliere recently performing Rascals hits. Photo by Leon Volskis
Otis Redding couldn’t believe his eyes when he stuck his head inside an Atlantic Records studio where a fairly-new group called the Rascals were recording.

“My God!” the big soul superstar exclaimed. “They are white!”

One of the label’s biggest stars couldn’t be faulted for assuming that, though. A lot of listeners thought the New York-based band behind hits like “Good Lovin’” “You Better Run,” “What is the Reason,” “Lonely Too Long,” “A Girl Like You” and “Groovin’” were indeed Black. 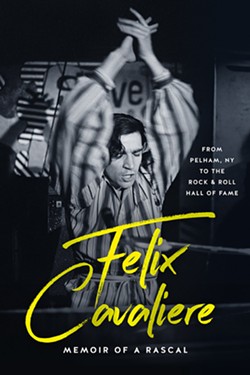 Book cover
Photograph by Linda McCartney/©1967 Paul McCartney
That was largely due to the "blue-eyed soul" voice and deep organ sounds of Felix Cavaliere. With songwriting partner and Rascals co-vocalist Eddie Brigati, he penned those tunes along with the soaring Brigati-sung “How Can I Be Sure,” “A Beautiful Morning” and his proudest achievement, the socially conscious “People Got to Be Free.”

Cavaliere recounts that Otis Redding story and many more in his new book Memoir of a Rascal: From Pelham, NY to the Rock & Roll Hall of Fame (299 pp., $19.95, self-published).

Cavaliere traces his early life in a tight-knit New York Italian family where his piano lessons of Beethoven, Mozart and Chopin music quickly gave way to a far more fervent interest in the works of Lee Lewis, Domino, and Richard (as in Little).

He was particularly close to his parents, a dentist father and pharmacist mother (then a rare position for a woman). Her violent death in their house due to cancer when Cavaliere was 13 has haunted him for life.

He went to Syracuse University ostensibly to pursue a medical career but found himself far more interested in playing with rock and soul bands. In 1965, he joined forces with Brigati, Dino Dinelli (drums) and Gene Cornish (guitar) to form the Rascals. Fortunately, a name change to the “Young Rascals” and a gimmick of them wearing schoolboy outfits on stage was relatively short-lived.

The Rascals became the first white group signed to Atlantic Records, and Cavaliere credits producer Arif Mardin and engineer Tom Dowd with helping them find their sound in the studio as they scored hit after hit.

As one of the opening acts for the Beatles at their historic 1965 Shea Stadium concert, tens of thousands of screaming teenagers saw the flickering message “The Rascals are Coming!” on the scoreboard. It was a little trick that show promoter (and, coincidentally, Rascals manager) Sid Bernstein pulled off, only to shut it off after a furious Beatles manager Brian Epstein demanded it.
The book goes by at a brisk pace, almost too brisk. Rascals fans will want more about the nuts and bolts of their recording and writing process and concerts. By 1972, the band had broken up, and Cavaliere goes into his other pursuits, including his spiritual quest under the tutelage of Indian holy man Swami Satchidananda and deep affection for the state of Hawaii.

The Rascals were inducted into the Rock and Roll Hall of Fame in 1997 (in a class that also included the Bee Gees, Joni Mitchell, the Jackson 5, and Crosby, Stills and Nash). Famously, band champion Steven Van Zandt’s humorous induction speech caught the ear of writer/producer David Chase, who immediately decided to cast the non-actor in a new series he was putting together: The Sopranos. 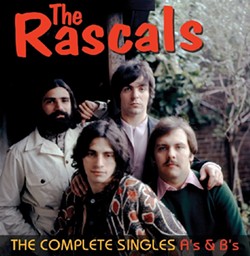 Top: Felix Cavaliere, Dino Dinelli; bottom: Eddie Brigati, Gene Cornish
Record cover
Cavaliere says the night was magical especially during their performance, but he writes was tainted by Brigati’s nonsensical speech onstage and even more bizarre verbal attacks on the music industry (including some people in the room) backstage at a media event.

In fact, Cavaliere says it was typical for decades with Brigati, who could be a hilarious Italian ladies’ man one minute and bitter complainer the next.

One area that Cavaliere goes deep into is the ill-fated Once Upon a Dream Rascals reunion project shows from 2012/2013. Co-produced by Van Zandt, it was a multi-media theater spectacle that found the original band (with a small backing group) playing their hits interspersed with broadcast filmed segments of actors playing band members, ‘60s news footage, a historical voice over narrative, and special effects.

After a successful off-Broadway and Broadway run, the hybrid show found less success and empty seats as it then traveled around the country, with many a reviewer wondering why it wasn’t just a straight concert. Cavaliere writes that the lack of attendance, combined with a high production coast and conflicting agendas from non-band members, cause the show to abruptly stop and the band were notified by phone call.

For his part, Van Zandt (who also wrote the book for the show) has always vigorously maintained that Cavaliere got greedy, demanding a larger fee and more control over the show. The bad blood remains today. And while a performance of Once Upon a Dream was indeed filmed, it has never been officially released for public purchase (though clips, like the one below, have shown up on YouTube).
Whatever the truth (or truths) may be, Cavaliere’s subsequent attempts to reunite the group again met with stonewalls from Brigati and Dinelli. Cornish did go out on the road with “Felix Cavaliere’s Rascals,” but suffered a stroke onstage in 2018. Cavaliere and Brigati have also been inducted into the Songwriters Hall of Fame.

One nitpick is that the book—which is self-published—could have used the services of a music-knowledgeable proofreader. Many band and performer names are misspelled, and there are a number of wrong facts. Like David Crosby being in the Buffalo Springfield, or Otis Redding being alive to play a gig in 1968 or noting that the 1966 garage rock classic “Black is Black” was by the known Mexican-American group Los Lobos instead of the actual Los Bravos.

Today, the 79-year-old Cavaliere is still out on the road with his version of the Rascals, spreading good lovin’ and groovin’ to three generations of fans. And this book does the job of any music bio worth the paper it’s printed on—sends you back to the music.

For more on Felix Cavaliere and the book, visit FelixCavaliereMusic.com
KEEP THE HOUSTON PRESS FREE... Since we started the Houston Press, it has been defined as the free, independent voice of Houston, and we'd like to keep it that way. With local media under siege, it's more important than ever for us to rally support behind funding our local journalism. You can help by participating in our "I Support" program, allowing us to keep offering readers access to our incisive coverage of local news, food and culture with no paywalls.
Make a one-time donation today for as little as $1.