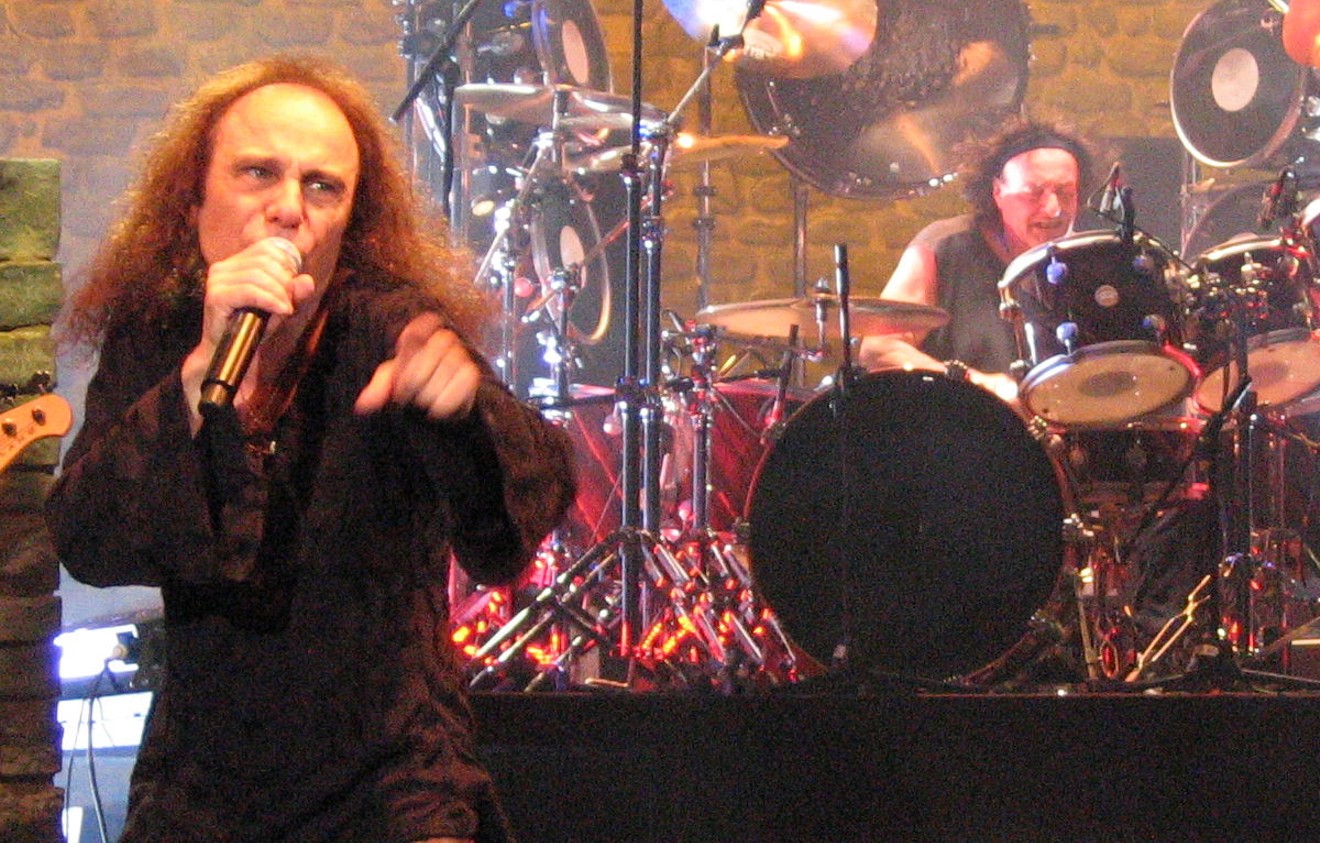 Ronnie James Dio with drummer Vinny Appice in 2007. He had reunited with his former Black Sabbath bandmates to tour and record as Heaven and Hell in the years prior to his death. Photo by Marek Krajcer/Wikimedia Commons
When Ronnie James Dio—announced in 2009 that he had stomach cancer, it certainly gave him an impetus to complete the autobiography that he’d been working on for a while.

He’d already had a sizable chunk of the manuscript written down in what his widow Wendy Dio said was his “beautiful handwriting.” But it only took the narrative deeply up his time with Rainbow. There were still many years and much music to cover in his tenures with both Black Sabbath and his own long-running band, Dio. 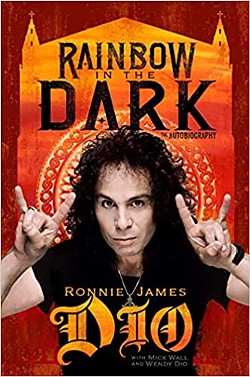 Permuted Press book cover
As he became weaker, the pages became more notes and anecdotes he’d put down or relate to his wife. He even received treatment at Houston’s M.D. Anderson Hospital. But time ran out, and Ronnie James Dio passed in May 2010.

Years later at the urging of Dio’s former publicist and esteemed hard rock/heavy metal journo Mick Wall, and the project took life again. The pair began to flesh out the narrative using the copious interviews Dio gave over the years, other writings, those notes, and other sources to continue the story in his voice, bringing the tale up to 1986. Though one unavoidable question is how much of what's in print actually came straight from Ronnie.

That’s when the singer achieved a dream of selling out 20,000 tickets at Madison Square Garden with Dio. After several announced-then-rescinded publication dates, Rainbow in the Dark (named after his biggest solo hit) is finally out. It will leave fans of the man who is arguably heavy metal’s greatest vocalist (apologies, Rob Halford and Bruce Dickinson) more than happy to throw his signature metal horns in approval.

Born into an extended Italian-American family, Ronald James Padavona’s musical journey began at the tender age of 6. That’s when his father stopped him from going to play baseball with his friends and insisted on the spot that he pick a musical instrument to play. Something that the elder man felt was necessary to create a “well-rounded individual.” Stumped, the boy picked the trumpet, on which he then spent a dozen years taking lessons.

But it was the early ‘60s, and rock and roll bands did not have trumpets. So he switched to bass and gigged in a series of groups, the most notable of which was Ronnie Dio and the Prophets, who toured up and down the east coast and released ten singles between ’62 and ’65, with Dio also taking over vocals.

His new last name stemmed from a desire to have a tougher, Mafia-sounding moniker. That he took inspiration from real-life mobster Johnny Dio—then ill-advisedly might sometimes pose as his nephew to help bookings along. And that leads to some funny stories about the truth almost catching up with him.
Years later, Dio and wife Wendy are dining in a known mob-hangout restaurant and start receiving amazing service and expensive drinks they didn’t order. The waiter simply says that “Uncle Johnny” is taking care of the tab. Whether the real-life mobster was in the restaurant himself or someone else took it upon themselves to throw out the name, the couple never found out, because they never saw him.

The Prophets morph in to the heavier-sounding Elf, whose benefitted from the patronage of Deep Purple bassist Roger Glover on three albums. But despite opening for them near the peak of the Purps’ success, missed opportunities and a series of accidents (including a car wreck caused by a drunk driver that killed a bandmate and seriously injured Dio and the others) limited their success.

But Dio reminisces about one great 1974 Elf gig with Deep Purple and the J. Geils Band at Houston’s Astrodome. “We were awed by the structure…[but] the audience was not allowed on the field because of the fragile AstroTurf covering it,” he writes. When new Purple singer/bassist Glenn Hughes off-the-cuff invites the far-away audience to “come on down,” they did by the hundreds, swarming over barriers and onto the field.
“The Astrodome management went crazy and threatened lawsuits. When the show was over, the band was charged $60,000 [$332,000 in 2021 dollars),” Dio continues. “Ritchie [Blackmore, Purple leader/guitarist] loved it. You couldn’t buy that kind of publicity.”

Blackmore then lures Dio to front Rainbow, though there was never a question about who was running this ship, but plenty on which version of the mercurial guitarist you’d get (Purple vocalist David Coverdale called Blackmore an “interesting bunch of guys”). Hijinks with drink, drugs, and hotel wrecking/ejection continues. But when Dio meets Wendy at the Rainbow Bar and Grill where she is working as a server, his groupie days are done.

Dio’s lyrics continue on themes he would use for the rest of his life of kings and queens, angels and demons and dungeons and dragons. After Dio quits Rainbow over Blackmore’s desire to make more commercial music, he befriends Black Sabbath guitarist Tony Iommi who is looking to replace ousted lead singer Ozzy Osbourne.
The two collaborate on only two studio records at the time, but what doozies. Heaven and Hell is one of metal’s all time best records and Mob Rules is up there as well. But (again) creative tensions lead to a split, Alpha Males Dio and Iommi clashing while bassist Geezer Butler—voluntarily acquiescing lyric writing to Dio—wants his pen back in the mix.

It’s this section that readers get the definitive version of how Dio adapts a hand gesture credited to Italian culture and specifically his grandmother into the now ubiquitous “metal horns.” It’s actually called the “Maloik," or "evil eye" to curse an enemy or protect yourself from one. Dio notes that since Osbourne was always flashing a peace sign, he needed a more nefarious gesture of his own. When he began flashing it at Sabbath crowds in 1980—and they started flashing it back—it took off immediately. Wendy also begins to take more guidance as her husband’s manager and fighter.

The end of the book is a whirlwind journey of how the band Dio’s first three records, Holy Diver, The Last in Line, and Sacred Heart are very successful. The relative brevity of pages dedicated to this era absolutely leaves the reader wanting a bit more. Though the circumstances under which it was written certainly explain why.
The Dios—both Ronnie in his words and Wendy in directly-quoted sections—do engage in a bit of score-settling. Especially with original Dio band members Vivian Campbell and the late Jimmy Bain, who have complained over the years about lack of financial rewards and songwriting credits given them during their time with the group.

They make their cases, although they’re not always entirely convincing (i.e. Bain’s crucial synth intro and musical theme to biggest hit “Rainbow in the Dark” is dismissed as a “little keyboard part”). But the couple also took the biggest risks financially and artistically to break the group. And both are honest about the struggles and boundaries with Wendy’s dual role as the manager of the band as well as the wife of its driving force, and admit there were plenty of heated arguments when those lines blurred.

Overall, Rainbow in the Dark is a great work for any Dio fan (in any of his incarnations), and long overdue.  A potential second volume covering 1986-2010 is mentioned by Wendy Dio and Wall, and fans would certainly love to see that coming to fruition.

Rainbow in the Dark: The Autobiography
By Ronnie James Dio with Wendy Dio and Mick Wall
264 pp.
$28
Permuted Press
KEEP THE HOUSTON PRESS FREE... Since we started the Houston Press, it has been defined as the free, independent voice of Houston, and we'd like to keep it that way. With local media under siege, it's more important than ever for us to rally support behind funding our local journalism. You can help by participating in our "I Support" program, allowing us to keep offering readers access to our incisive coverage of local news, food and culture with no paywalls.
Make a one-time donation today for as little as $1.