Ramones Drummer Gabba Gabbas About His Time in the Band

The moody cover of 1984's "Too Tough to Die." It was considered a comeback for the Ramones and a fan favorite. L to R: Richie, Joey, Dee Dee, and Johnny. Record cover from Sire/Warner Brothers
I Know Better Now: My Life Before, During, and After the Ramones
By Richie Ramone with Peter Aaron
324 pp.
$29.99
Backbeat Books

Part of the deal of being in the Ramones was that you could only appear onstage in the band’s uniform: leather jacket, T-shirt, torn blue jeans, and sneakers (the jackets, incredibly, also had their own carrying case on the road). You had to have dark hair, and your new last name – like a gang, or a family – was “Ramone.”

That the drummer with the stage name Richie Beau was in the seminal punk rock group for nearly a year before he was officially told he was “Richie Ramone,” in hindsight, was a portent of things to come. He was part of the band, but not really, in a group that included three other original members: Joey (vocals), Johnny (guitar), and
Dee Dee (bass). 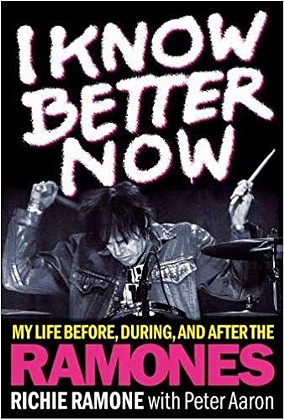 Book cover
Richie spent the years 1983-87 behind the kit, playing more than 500 gigs around the world and on three records (Too Tough to Die, Animal Boy, and Halfway to Sanity). He also wrote on his own one of the group’s later standards with the true-life inspired “Somebody Put Something in My Drink.”

The book begins with young Richard Reinhardt becoming obsessed with drums at an early age, becoming a percussive star in his high school band. His tales of teenage and young adult partying and pranks read like a New Jersey version of Dazed and Confused. But by the time he got a call to audition for the Ramones who were firing second drummer Marky for boozing too much, Richie had experience in a number of punk and rock bands – as well as playing polka and disco music in the Catskills.

Richie’s take on his three “bruddahs” is interesting, and falls into line with what other books and documentaries have related. Joey was sweet and somewhat naïve, but had severe issues with OCD, cocaine, and alcoholism. Dee Dee was in a world of his own, wandering in a high of marijuana and heroin (though he managed to write quite a bit of song material). And Johnny, the leader (though he was only called “John” by most) was autocratic, aloof, and tight-fisted with money.

Here, Johnny is a my-way-or-the-highway guy who would never break his ritual of stopping at a convenience store for milk and cookies before heading back to his hotel room or home. And if a gig was five hours or less driving time from that home? The Ramones drove back, cramped in a van, no matter if their next gig was near their previous one. Saved money on hotel rooms that way.

Richie writes he was closest to Joey, though mostly because they hung out together so much at bars when the band wasn’t playing. He does have a neat story when he was invited to the singer’s family’s festive Christmas dinner one year - a dinner they haddespite the fact that they were Jewish.

“He’s the greatest thing to happen to the Ramones,” Joey once told a newspaper reporter. “He put the spirit back in the band.”

Still, Richie writes he was often treated as a gun for hire rather than a real member – even when the Too Tough to Die record got the band their best reviews in years and today is the one post-‘70s records that fans cherish most.

He had a weekly salary and a split of the publishing. But when Richie noticed that the group made its biggest money from the sales of T-shirts that bore his own name, and that he never saw a dime of it while the other three were handed stuffed envelopes of cash after gigs, he began to grow frustrated.


Richie writes maybe his days were also numbered when he stood up to Johnny during a recording session for changing one of his songs – something no one had done before. And when he asked the guitarist about getting a small cut of the T-shirt money , the guitarist turned him down immediately and flat. And Richie decided it was time to go.

So after playing a gig in 1987, Richie Ramone walked off stage, informed his shocked band mates he was quitting, and stepped into a waiting limo he rented, stocked with his girlfriend, a friend, a bottle of Cristal, and quaaludes, and never looked back. Even when band associates begged him to return, dangling promises of better treatment. Richie writes that in today’s climate, a simple meeting with lawyers could have solved the issue. But that’s not how things worked in Ramones World at the time.

After Blondie’s Clem Burke played two shows as “Elvis Ramone,” a now-sober Marky was hired back, playing until the band called it quits for good in 1996. When the band made it into the Rock and Roll Hall of Fame in 2002, Richie was not included in the inductees. Post-Ramones, he played in some other groups, worked as a sound engineer and A/V expert, and caddied at a golf course (!). Today, he tours with his own band playing a Ramones-heavy set, thankful and appreciative that fans show up, especially in places like South America and Japan where the Ramones’ legacy looms large.

He never spoke with any of his bandmates again and watched, Dee Dee, Joey, and Johnny all pass within fairly quick secession of each other, as well as more recently original drummer Tommy Ramone.

Richie does play the annual Joey Ramone Birthday Bash show, usually with latter-day group bassist C.J. Ramone and Joey’s brother Mickey Leigh. But he does wonder if the band could have had a more thriving careet had he stayed. The title of this book comes from one of the songs he wrote and recorded for the band, though it can also serve as a personal mantra in this book that’s a welcome and insightful addition to the Ramones bibliography.
KEEP THE HOUSTON PRESS FREE... Since we started the Houston Press, it has been defined as the free, independent voice of Houston, and we'd like to keep it that way. With local media under siege, it's more important than ever for us to rally support behind funding our local journalism. You can help by participating in our "I Support" program, allowing us to keep offering readers access to our incisive coverage of local news, food and culture with no paywalls.
Make a one-time donation today for as little as $1.