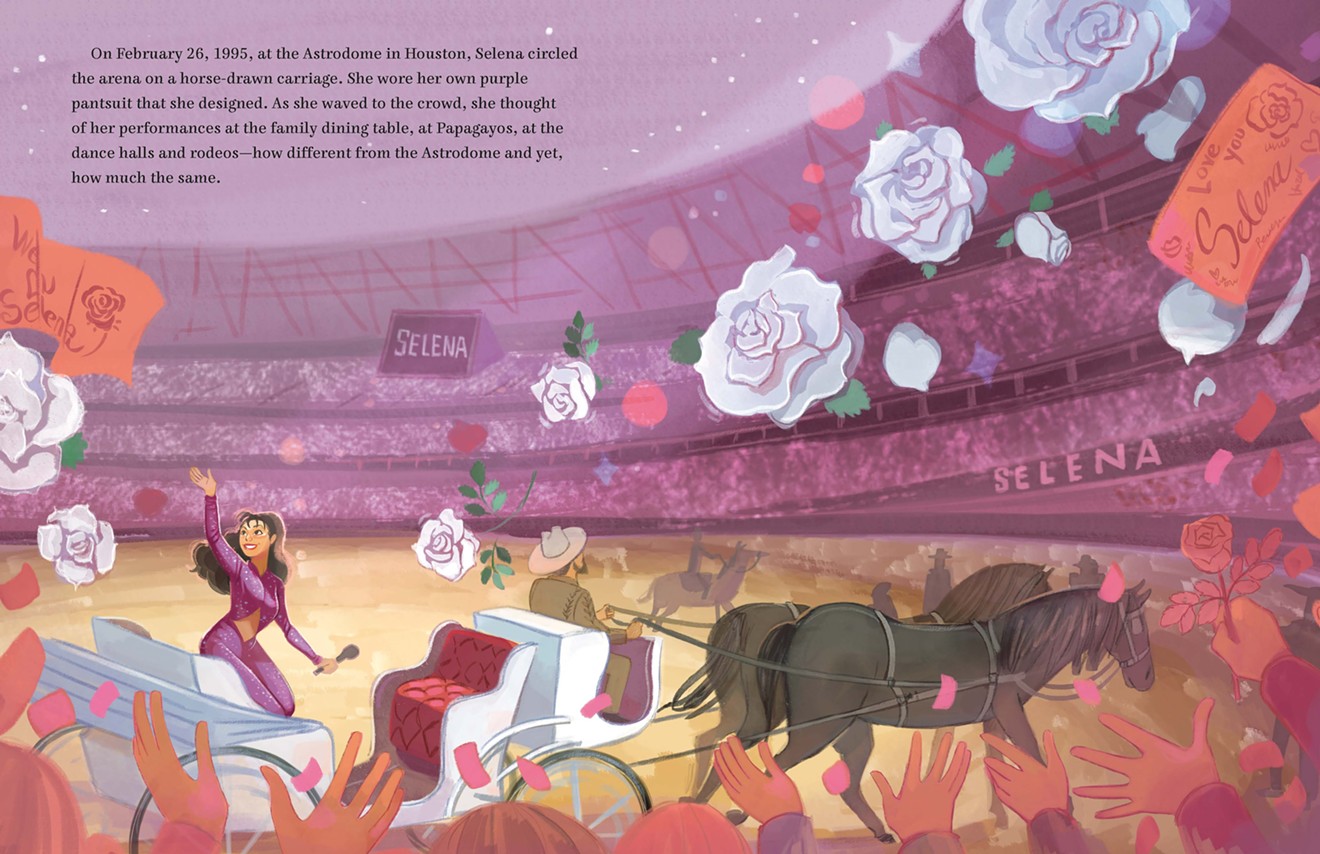 Selena's 1995 Houston Rodeo concert at the Astrodome as depicted in the book. Art by Teresa Martinez/Courtesy of Dial Books
While she was not a native daughter of the Texas city, Corpus Christi has certainly claimed Selena Quintanilla—the late singer who has since become an icon—as a favorite daughter.

Diana López was born and raised in Corpus Christi, and has now returned there after many years in San Antonio while carving out a career as a middle school fiction book author. Their two paths now cross—at least on paper—with the July 20 publication in both English and Spanish of Sing with Me: The Story of Selena Quintanilla (32 pp., $17.99, Dial Books). Dial Books cover
“Selena and I were very close in age, I’m just a tiny bit older. I knew who she was,” Diana López says. “She was always there in Corpus, especially in the early days. If you were having a quinceañera or a wedding, you could always call Selena and her family’s band to come play it.”

The children’s book tells Selena’s story—mostly her musical journey—beginning from the time she was a little girl in Lake Jackson, Texas who only wanted to sing. On one page, she uses a rolled-up tortilla as a microphone, in what Lopez says was a bit of creative license.

The narrative follows through Selena’s singing with her family’s band for years at both their restaurant and later across the region after moving to Corpus Christi. And through attempts to break into the Tejano music scene, to the recording studio and finally the cusp of stardom Until she was tragically killed on March 31, 1995 at a Days Inn in Corpus Christi by her own fan club president, Yolanda Saldívar (understandably, the book’s text doesn’t mention this). Selena was only 23 at the time.

One aspect that adult readers might find interesting is that the “Queen of Tejano Music” was not even raised to know or speak Spanish, and really had to study to learn to sing in the language.

“I don’t know why her parents didn’t teach her Spanish or speak it in the home, but I imagine the reason is that they were from a generation where [children] were ridiculed or chastised for speaking it,” López says. “But she took the challenge of learning another language to broaden her reach and get into the Tejano music world.”

The idea for the book came in 2017 when López found herself in Los Angeles, roughly around the same time that Selena was awarded with a star on the Hollywood Walk of Fame. She wondered if anyone would adapt her story for a children’s book before coming to the obvious conclusion: It should be her.

“When she really started [becoming popular] as a singer, I was already living in San Antonio, and all I was doing was working and going to school. So, I really wasn’t tuned into what was happening in music,” López admits. But she remembers how impactful the singer and her music were, even back in 1995 at the time of her passing when López was working as a middle school teacher in San Antonio.

“One of my male students came to door crying, and I thought he was being picked on. But then he said ‘Selena died.’ And I went into the hall and a lot of kids had just found out and were also very upset,” López recalls. “Selena just felt like your friend, very had this hometown and grass roots quality, and never got too big for her britches. I’ve always appreciated that about her.” Diana López
Photo by Kristel Puente/Courtesy of Dial Books
López’s research consisted largely of devouring fact-based magazines and newspaper articles, documentaries and published interviews. As Selena is a public figure, López didn’t need the permission or oversight of her family or estate to embark on the project. Which was perhaps for the best as the disagreements about Selena’s music and legacy between her blood family (led by father A.B. Quintanilla) and her husband Chris Pérez are well documented.

One person that López has no issue collaborating with for her first children’s picture book was the chosen illustrator, Teresa Martinez. Project Editor Nancy Mercado put the two together. And Martinez—who lives in Mexico—was also a fan and well acquainted with the life and music of Selena.

Coming from the prose-based world of middle school books, López says she originally “overwrote” the book with text, until Mercado gently told her that in this genre, it’s pictures that have a much bigger role in carrying the narrative.

“I thought Teresa’s illustrations were beautiful. I loved her color palette, and especially how she showed movement,” López says. But adds there was one unexpected particular graphic area that they had the most communication about.

“The thing we did the most research about was Selena’s hair!” she laughs. “There was a lot of backing and forthing and conversations about that. Because it changed so much. It seemed like she had a different hairstyle every year!”

Surprisingly, this is the second time Selena's life has recently received the full-on children's picture book treatment. Last year saw the publication of Queen of Tejano Music: Selena by Silvia López and illustrated by Paola Escobar.

In recent times, young people’s publishing has seen a trend toward picture book biographies of real-life people. Texas author Chris Barton has written for kids about the lives of the inventors of Day-Glo paint and the water gun, as well as politician and activist Barbara Jordan (What Do You Do With a Voice Like That?). In September, he’ll release one about the childhood of Willie and Bobbie Nelson, co-written with the musical siblings (Sister, Brother, Family).

“That’s a great observation, and I’m thinking about that as you say it. It is a trend,” López says. “It’s a great way to introduce our young people to history without it feeling like history. Kids’ eyes kind of gloss over when they hear that word because it’s a lot of dates and names and battles. But there’s a richness that history has to offer, and these picture book biographies can do that.”

In a spread from the book, Selena cuts her performing teeth at her family's Mexican restaurant.
Art by Teresa Martinez/Courtesy of Dial Books
And she has no doubt that Selena’s story—even though it ended a quarter century ago—will still resonate. Because there’s always the music. On her school book tours, López sees plenty of Selena T-shirts on little kids.

“Her popularity is still strong. With this book, I wanted to talk to kids about who she was and what she was trying to accomplish. And it might mean more to them because she’s from their area or [culture],” López offers. “I think that encourages kids to keep reading and feel proud and the idea that they can be successful too because Selena was so close to home. And it shows that at one point, these famous people were children too.”

Finally, Houston readers will get a glimpse of some local color in the two-page spread that shows Selena’s triumphant February 26, 1995 concert at the Astrodome. She and her band performed in front of more than 61,000 fans as part of the Houston Livestock Show and Rodeo.

“That was her biggest concert, and it happened about a month before she passed away, so it’s embedded in our imaginations. I can’t tell you how many times I’ve watched that video!” López laughs. So many, apparently, that when it was recreated in the recent Selena miniseries on Netflix, she astonished her husband by accurately predicted the singer’s stage moves.

More importantly, it was that Astrodome performance that gave the author inspiration for the book’s title, Sing with Me.

“She would sing, but then would always be poking the microphone at the audience and asking them to sing with her, to be a part of the show. Not just at that concert, but also in other videos I watched,” López sums up. “It always impressed me just how so much loved she was by everybody.”

For more on Diana López and her books, visit DianaLopezBooks.com
KEEP THE HOUSTON PRESS FREE... Since we started the Houston Press, it has been defined as the free, independent voice of Houston, and we'd like to keep it that way. With local media under siege, it's more important than ever for us to rally support behind funding our local journalism. You can help by participating in our "I Support" program, allowing us to keep offering readers access to our incisive coverage of local news, food and culture with no paywalls.
Make a one-time donation today for as little as $1.