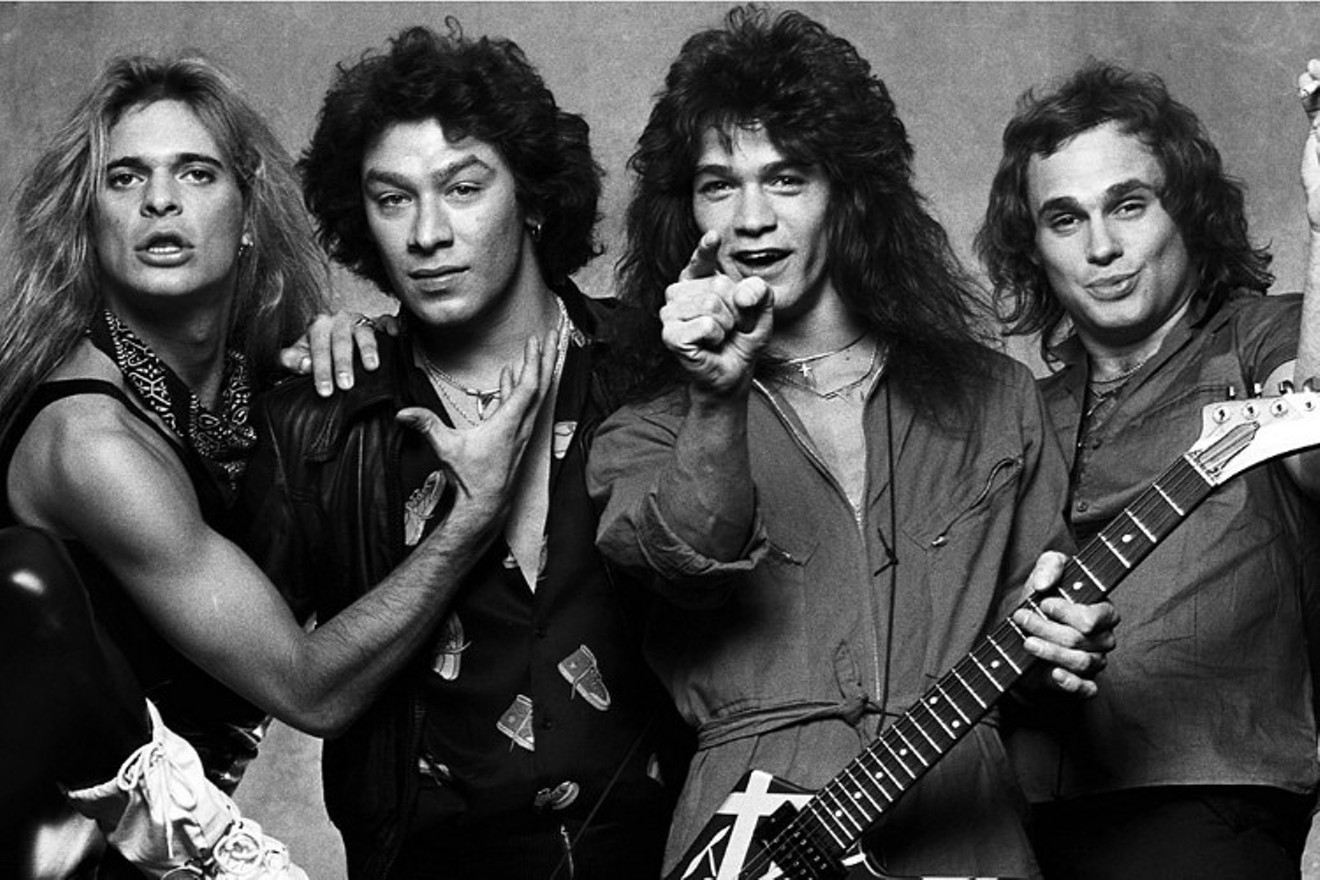 The original Van Halen: David Lee Roth, Alex Van Halen, Eddie Van Halen and Michael Anthony Record back cover
When Jan and Eugenia van Halen emigrated to the U.S. from Holland in 1962, their two sons only knew four words of English. “Yes,” “No,” and – for some reason – “motorcycle” and “accident.” That was the complete vocabulary for eight-year-old Alex and seven-year-old Edward as they got off the liner onto the shores of California—their journey partially paid for by Jan agreeing to play piano with the ship’s orchestra.

Edward would eventually do most of his communicating in the musical sense by basically reinventing guitar playing and forging an utterly unique identity. Not to mention influencing hundreds of thousands of six-string shredders from family party players to professionals and go on to sell millions of records.

But when Eddie Van Halen (the family named changed from van to Van) died last year at the age of 65 from a stroke after suffering a series of year-long contributing health problems, he had never been the sole subject of a full-length biography. That changes with the publication of Unchained: The Eddie Van Halen Story by Paul Brannigan (288 pp., $28, Permuted Press).

“Hard rock’s own Peter Pan, a free-spirited soul who never grew up but who learned how to fly” is how Brannigan characterizes Eddie Van Halen in the introduction.

The sons of an itinerant musician father and a strong-willed but exasperated mother, Eddie and Alex Van Halen took to music early—though it was Alex who started on guitar and Eddie playing drums before they wisely switched instruments. The boys eventually joined their father’s band, playing polka and jazz standards, and one once point dressed in lederhosen onstage! That's a long way from the epochal "Eruption" solo.

Brannigan’s story of the early days of brothers in bands who would eventually form Van Halen with vocalist David Lee Roth and bassist Michael Anthony is compelling (an area covered even more in depth in Greg Renoff’s absolutely essential book Van Halen Rising).

Graduating from playing Pasadena backyard parties, L.A. clubs like Gazzarri’s and Starwood, and even a wedding (where they earned the sum of $100!), the band quickly graduated to opening slots on larger tours. The combination of Van Halen’s guitar wizardry and Roth’s bombastic front man shenanigans actually blew headliners like Journey and Black Sabbath off the stage.
Even early on, Eddie Van Halen’s obsession with his instrument left little room for any other interests. Shy by nature, he would endlessly noodle on his fretboard while his bandmates danced and partied the night away (though Eddie certainly enjoyed his booze and drugs just as much).

By the time they debuted with 1978’s Van Halen album, the band’s style of melodic hard rock could appeal to both the girls who wanted to dance and the guys who studied Van Halen’s flying fingers with eagle-eyed tracking. It was an upbeat breath of fresh air in an era where hard rock and heavy metal were getting a bit too heavy.

“The album is the purest distillation of the hedonistic, liberated, sun-kissed California rock music ever committed to tape,” Brannigan writes of the band’s debut. “It’s fast cars and loose morals, cheerleaders, cheeseburgers and cocaine, Daisy Dukes and bikini tops, bongs, breaking surf and broken curfews; a soundtrack to teenage rebellion, with every trace of self-doubt and self-restraint eradicated.”

The narrative page turns at a good clip through the rest of the Roth-era band’s discography, touring, the US Festival debacle, Van Halen’s party-fueled marriage to actress Valerie Bertinelli and the growing chasm over control of the band’s musical direction with Roth, with the added fuel of the latter’s desire for a simultaneous solo career.
Brannigan uses a combination of original interviews, archival research and then-contemporary reviews/interviews. The last are especially interesting, given that these words were put together covering the band in the “then” as opposed to with historical hindsight.

The book carries on snappily through the years: The massive commercial success with new singer Sammy Hagar, the ill-fated album with singer Gary Cherone, and Eddie Van Halen’s own maddeningly herky-jerky journey. That included stops for up and down health, substance abuse and recovery, divorce, remarriage, fatherhood, completed and aborted recording and touring projects, reunions with both Roth and Hagar and inviting teenage son Wolfgang to replace the summarily dismissed Anthony.

In the end, a fan can only wonder what a truly sober, healthy and productive Eddie Van Halen could have done in the past quarter century to burnish his already-considerable legacy. No matter. The key influential and copied guitarist for an entire generation has a secure legacy.

And while it doesn’t exactly dig deep into the man and his psyche—and guitar heads will want to know more about his composing process, Unchained is a solid, comprehensive look at the groundbreaking guitarist. Not to mention the inventor of the Frankenstrat model!
KEEP THE HOUSTON PRESS FREE... Since we started the Houston Press, it has been defined as the free, independent voice of Houston, and we'd like to keep it that way. With local media under siege, it's more important than ever for us to rally support behind funding our local journalism. You can help by participating in our "I Support" program, allowing us to keep offering readers access to our incisive coverage of local news, food and culture with no paywalls.
Make a one-time donation today for as little as $1.