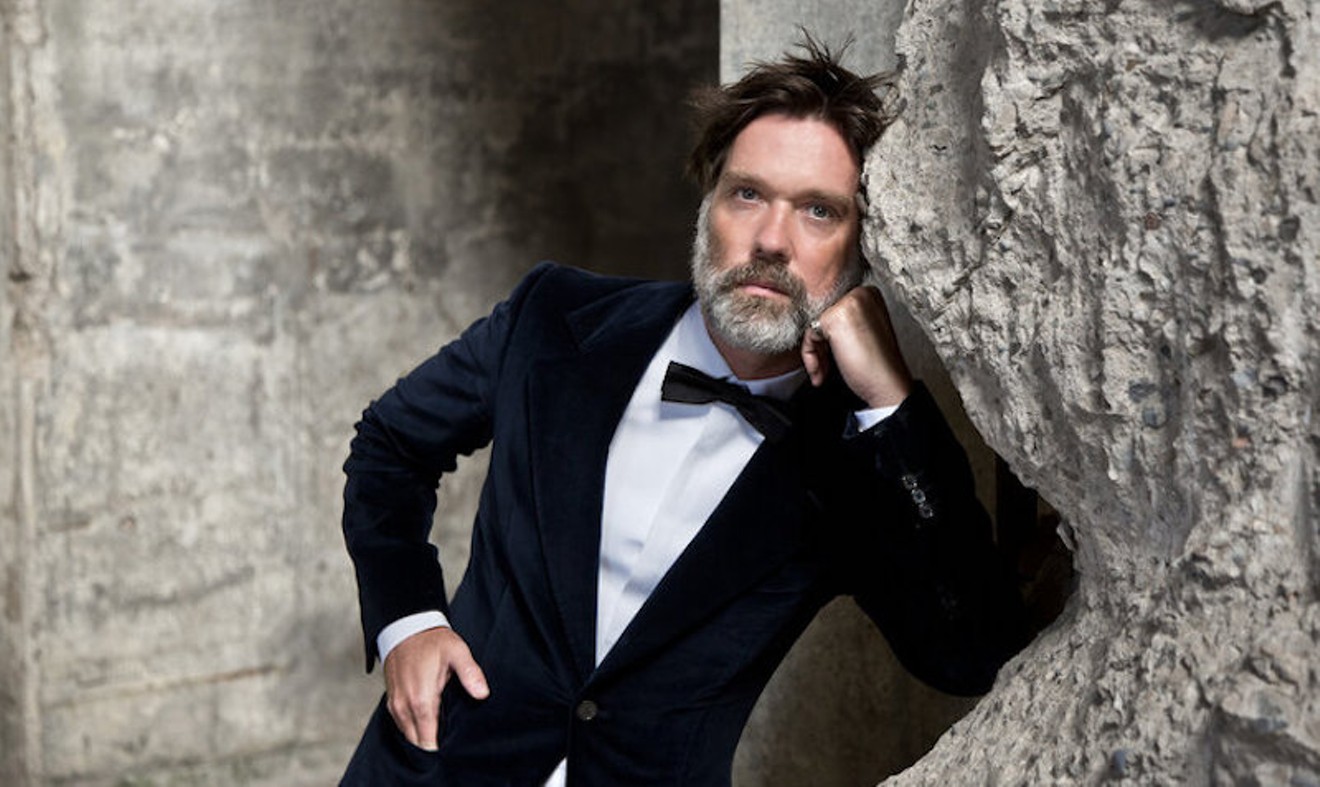 Rufus wainwright will perform a solo show at The Heights Theater on Saturday, September 17. Photo by V. Tony Hauser
After a busy summer touring behind his 2020 Unfollow The Rules album which ended with a big performance dressed as Annie at the Glastonbury Festival, Rufus Wainwright is getting back to what he knows best.

“Now I'm back at my day job which is just a good old fashioned troubadour. I just go from town to town and spread the news,” he says ahead of his Houston show.

Wainwright will perform a solo show at The Heights Theater on Saturday, September 17 with local artist Amanda Pascali opening the show. Despite being a big name in entertainment, Wainwright makes it a point to support local talent when he tours, saying that is the way it “should be” for artists.

Being able to exist and thrive somewhere between large stages and small clubs is part of Wainwright’s charm as a performer. Watching him perform, it’s clear that he is comfortable in his own skin.

“I tend to go out there and really try to remain as open as possible to whatever is happening in whatever form,” he says of his live performances. “I just try to be this clear vessel that's translating the energy in the room. I have learned over the years to predict the general temperature and especially I would say with places like Texas, I’m always struck when I get there how excited, engaged and joyous the audiences are.”

Being an opinionated and outspoken openly gay artist, it can be rather surprising for Wainwright to hit the Southern states and feel the love from the audiences while knowing he is in the belly of the beast politically.

“I’m always stuck when I come there, the conundrum that exists of this incredible place with such incredible people and then this dark vibe which is very frightening right now. It’s obviously not only in Texas where this is occurring,” he says. Although at times, he says, he has felt the temptation to leave the United States, he feels he can add to the dialogue and fight for a better and more just future for all.

“Right now I feel it's more important to be here, to go out and fight for what you believe in and be part of the solution so I'm into it. We seem to be at this inflection point at the moment where you've got to put your money where your mouth is. You've got to go out there and really fight for what you believe in and that could be a really exciting and exhilarating time.”

"You've got to go out there and really fight for what you believe in and that could be a really exciting and exhilarating time.”

Since hitting the scene in 1998, Wainwright has never seemed afraid to be vulnerable in his art and seems to lay it all out there in his songs and performances.

During the pandemic, Wainwright often hosted livestreams inviting people into his Los Angeles living room to get up close and personal with him and his family. “It was a pretty deep and profound experience and I'll never forget it. That being said, you can get kind of lost in the weeds a little. That comes with what your life is and what show business demands so it's definitely a tricky balance.”

It is never lost on Wainwright, son to artists Loudon Wainwright III and the late Kate McGarrigle, that his career carries an added weight with his family history. “There’s a lot of very strong emotions whirling around,” he says of his historically complicated family dynamics which have no doubt led to his ability to write sad yet hopeful, romantic and reflective songs.

“It’s almost like there's a parallel universe of our material versus our real lives and even though the songs can be either really nasty sometimes or a little too rosy, they're still thriving for something that the general public can absorb and hopefully grow from,” he says of his family’s art.

Wainwright considers his latest Grammy nominated release Unfollow The Rules to be the bookend to his debut album. “Initially years ago when I came to Hollywood, I arrived on this silver cloud of opportunity,” he says of the beginning of his career where many focused not only on his talent but also his heritage.

He describes the lavish budget set by Dreamworks and the endless possibilities to produce his first album, a very different creative landscape then where he is now.

“I made a great record eventually, though it took a long time, but this next time we didn't have the budget and we didn't have the youth shall we say but there were other elements that I had to lean on and in a strange way having these guardrails gives the album a real leanness.”
Unfollow The Rules is a beautiful and lengthy collection of songs capturing not only Wainwright's own experiences, but touching on the collective human experiences of longing and searching for greater understanding of life.

“Though it’s not as lavish as my first album, it still is, I think as powerful and maybe even more so because there's this weight to it due to my life and the experiences I've had. There's something about having boundaries that actually can make for better art in the end.”

His music has always found a way to go beyond pop or singer songwriter as Wainwright's playing and voice carry an operatic strength that is there by design but also something he just comes by naturally.

“My early teenage awakenings were really through opera so at first I kind of just hid it and then placed it in my songwriting and treated it as a kind of secret ingredient that certain people could pick up in the frequencies and other people were just sort of seduced by the newness of that type of sound but then over the years I realized I want to get back to this form that gave me so much.”

Wainwright has written two operas, Hadrian and Prima Donna, both of which he has been able to perform to good reviews in cities all over the world. He doesn’t rule out writing another or eventually bringing a production to Houston’s Grand Opera if the opportunity were to arise.

Whereas in his personal songs Wainwright bares his soul on a personal level, the operas allow him to explore the nuances of made up characters, a process he describes as polar opposite to his songwriting.

“I have to mine a whole other quarry shall we say. You really have to think 100 percent about the character. You always get in there no matter what because the music is emanating from the composer, but it really has to be about those people up there on stage who you want to eventually give birth to, let go of and give them a life of their own.”

Though he would like to create a warm comedic opera in the future, Wainwright is currently shifting his attention to an artform he has often been asked to take a stab at: musicals. “The time has come and I’m really going to face the music as they say or rather, face the musical.”

For now Wainwright will focus on the task at hand, being a touring piano man telling good, old fashioned stories through song. “I think in a lot of ways it's really important, these days especially, to live for the now and just have that moment where you are all sitting around listening to a song. Time stops for a second and you just enjoy what's going on at that time and that moment. That's very important right now, it gives you more strength.”

Rufus Wainwright will perform with opener Amanda Pascali on Saturday, September 17 at The Heights Theater, 339 W 19. Doors open at 7 p.m, $42-624.
KEEP THE HOUSTON PRESS FREE... Since we started the Houston Press, it has been defined as the free, independent voice of Houston, and we'd like to keep it that way. With local media under siege, it's more important than ever for us to rally support behind funding our local journalism. You can help by participating in our "I Support" program, allowing us to keep offering readers access to our incisive coverage of local news, food and culture with no paywalls.
Make a one-time donation today for as little as $1.