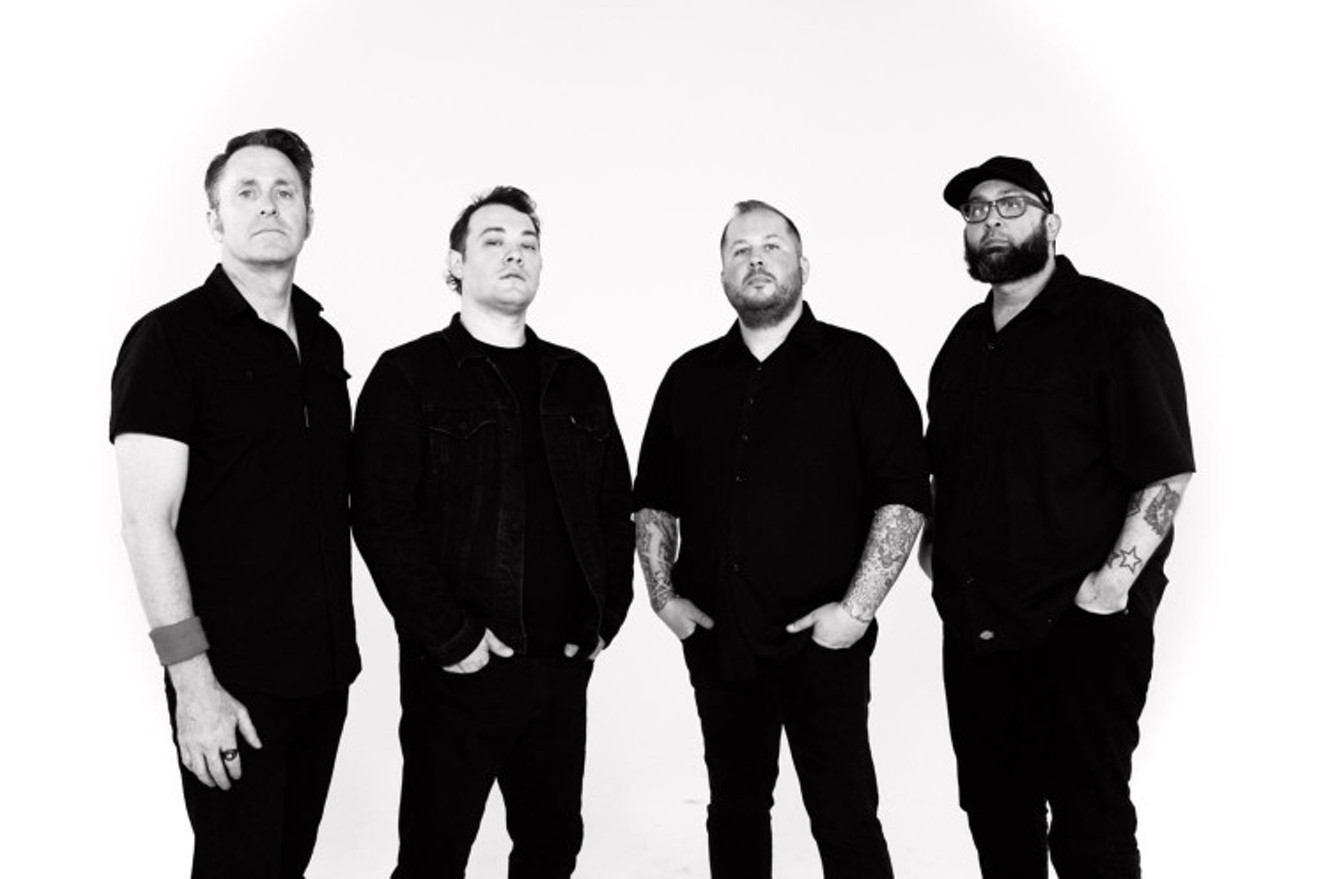 Steadfast HTX Photo by Scott Barber, courtesy of Steadfast HTX
The music lineup for the second annual For Kids’ Hearts Punk Rock Show & Skate Jam is stacked with notable bands, 10 in all, including marquee acts like 30footFALL and The Suspects. But by name alone, there may not be a band better suited to the event, which benefits pediatric heart patients and their families, than Steadfast HTX.

For one, the band’s name describes the sort of determination these families must often summon. Congenital heart disease is one of the most common birth defects. The show’s organizer, longtime Houston punk musician Cory Worden, put the event together to honor his late infant son Jonah and to support families like his who must be steadfast as they navigate some rocky paths. It’s also an apt adjective for the band, which is eager to perform for those who attend the June 11 event at Southside Skatepark.

Steadfast HTX is vocalist, guitarist and band leader Jason Bancroft, guitarist Travis Smith, drummer Charlie Price and bassist Andrew Wupper. We met on Zoom to discuss the group’s most recent album, Transmitters, new music on the way and why they were eager to play For Kids’ Hearts.

Bancroft provided the background of the band, saying started it more than 10 years ago as a spin-off project of the Austin bands Black Star Brigade, Born to Lose and Say Hello to the Angels.

Adding the HTX helped differentiate them from other “Steadfast” acts on Bandcamp and Spotify and even that former, Austin-based iteration of the band. The group in its present form ramped up about four years ago, according to Wupper, who was — well, steadfast — in his attempts to work with Bancroft. At the time, his band shared rehearsal space with Jason Bancroft and the Wealthy Beggars, an acoustic punk act which also featured Bancroft and Smith. Wupper was a fan of that band which was actually in its waning days.

“I kind of did a weird, stalky deep dive on Jason and I decided I need to work with this guy. He’s awesome and I want to be in on that,” Wupper mentioned. “I heard that his band was going to break up or did break up and I contacted him immediately. I messaged him through Facebook or something like that and I was like, ‘Hey man, heard you’re in between bands. Maybe you need to form a new band and, if you need one, I can play bass for you.”

Bancroft was flattered but passed. He told Wupper he was taking time away from music to focus on other things in his life.

“I don’t know if it was a month later or if it was just a couple of weeks later but I messaged him again and I’m like, ‘So, hey man, how about that thing we talked about?’ I think I hassled him like once a month for a year and then I gave up. And then basically at the moment I gave up I got a message from Jason saying, 'I sent you some tunes.’ And I’m like, ‘Because you’re forming a band and you want me to learn them and I’m your bass player?’”

That was indeed the case. With Wupper, also from Texas Mod Crushers, in the mix they then added Price as a drummer. He's played with bands like Next to Nothing, Monroe and Llorona.

“I’ve known Jason through Houston bands for a long time,” Price said. “Over the years playing shows together with different bands we became really good friends. When it came time for him to start the band, I was in between bands and Jason hit me up and here we are.”

Smith has been tied to Bancroft for so long he had to ask Bancroft about their history together.

“When did I start with the Wealthy Beggars? Eight, nine years ago?” Smith asked his bandmate. They decided it was in 2012.

“I tagged along, that’s what I do,” Smith laughed. 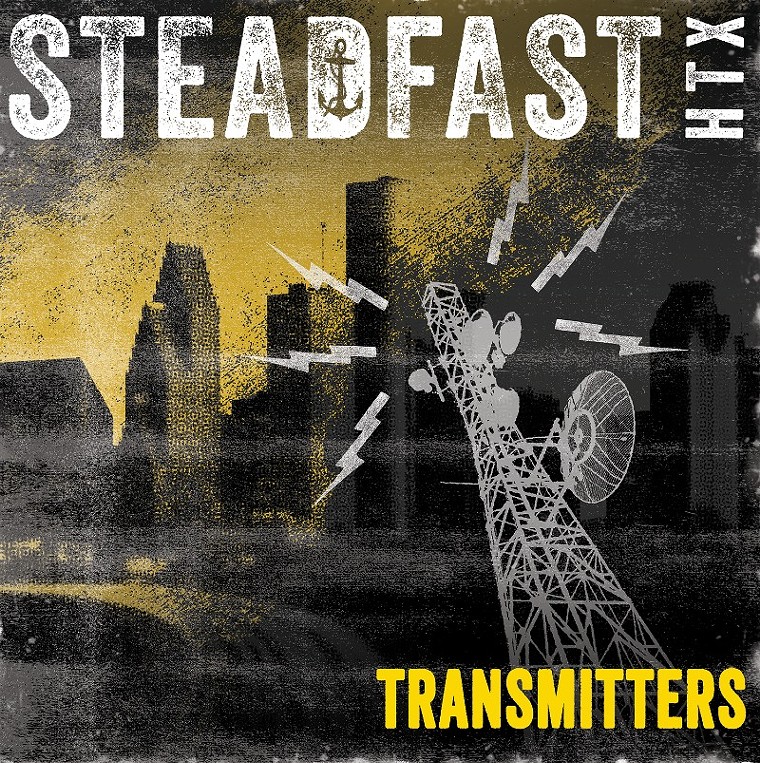 Transmitters, released just two years ago, already has its follow-up on the way
Album cover art
From all that, the band has evolved into its new self and has hit its stride over the last two years. In 2020, when the world was under quarantine, Steadfast HTX released its debut full-length album, Transmitters, 11 songs that define the band for listeners. From their disdain for “Thieves and Liars” to using “Old Scars” to set a new and better course to the title track, which sounds like it was lifted from a Vans Warped Tour compilation CD.

The band has played these songs live before in several pre-pandemic shows around the state but “This will be the first show where we’ll actually have a physical copy of our album,” Price said. “We got them back in June of 2020 so they’ve been sitting on my shelf, selling what we could online and we’re ready to sling some vinyl at our show.”

Fans will be happy to hear Steadfast HTX is almost halfway done with its new album. According to Bancroft, the working title for the approaching release is Preying for Peace and he said these new songs further the band’s evolution.

“It’s quite a handful of songs, 15 or 16. Some crazy ones that are kind of like instrumental two-tone ska kind of stuff that isn’t really our sound that we’re gonna try to sneak out there,” Bancroft said. “When inspiration comes over me, it’s like a waterfall, it’s a flood, it’s not just one or two songs, it ends up being 10 or 12 songs at a time and I have to get it down.”

Smith agreed the new songs are different and pull from the band members’ diverse backgrounds. For instance, he said he grew up bumping in and around Houston’s vaunted folk venue Anderson Fair since he was 12. But he’s also a longtime skater, into Lagwagon and pop punk acts. Getting to merge the music the band members love seems like the natural trajectory.

“Where we’re now seems like a good fit,” Smith said. “If we can kind of include a lot of different influences from punk because we all come from different parts of that genre, it’s going to be a lot of fun for everyone.”

Bancroft said the new songs “might look lyrically at some of the darker stuff but I think ultimately there’s always that light at the end of the tunnel in what we sing about and what we talk about.”


That’s a good segue for us to ask the group about doing some work for benefit projects like For Kids’ Hearts. They recently recorded a version of “Dick Lips” for Fate Fell Short, a Blink-182 cover compilation featuring other notable punk acts like Skaxdad, The Butts, Jukebox Romantics and Skatune Network. Proceeds from album sales go to the Prevent Cancer Foundation. Bancroft said his band mates ran point on the project since he's not a Blink-182 fan. His one caveat to participating was insisting they'd sound more like themselves than Blink.

“Charlie and I are unashamed pop punk fans,” Smith said. “I think we settled on ‘Dick Lips’ just because it’s a fun song, it’s a fun title. The track, it sounds nothing like the original, as far as even some of the melodies, the way Jason sings them, doesn’t follow the exact same as the original song. So, it was a lot of fun for us to do that.”

And, they all acknowledge, it benefits a worthy cause, the same as their participation in the For Kids’ Hearts show. Part punk show, part skate jam, with sponsorship from Theories of Atlantis Skateboarding, the benefit raises funds for child heart patients and their families. Funds raised will assist with care items for pediatric intensive care units, grief counseling, even travel funds to get families to the Texas Medical Center.

“We’ve known Cory, really, forever. Cory will tell you that we’ve been crossing paths since 1995 or ’96, from high school days, growing up, playing shows at The Abyss and Fitzgerald’s between Latch Key Kids and Animosity,” Bancroft said “We were the flier kids, back in the day when you used to put fliers on cars and pass ‘em out, that was how everybody met back then.”

Poster art
Bancroft was at the event’s first installment in 2019 to see the bands and old friends. He said, “as we were at the show, (Worden) was like, ‘You need to play the next one I put together.’”

They promised to play the 2020 show but the pandemic put everything on hold. Until this weekend, when Steadfast HTX - the band which lives up to its name - fulfills that obligation by bringing its show to punk and skate fans at Southside.

“Cory’s a nice guy, seems very selfless, very giving, and he’s always focused on all the other bands and never really about himself,” Bancroft added. “So, if he’s going to ask for some help, I think it’s our duty to help him. He’s an important part of our punk rock community.”

“I’ve been playing shows with various bands over the years and I’ve known Cory at least 20-plus years,” Price said. “When he reached out to us to ask us to play, we definitely wanted to do anything to kind of support him and his family because what they went through was tragic. So, we’re just happy to be a part and kind of be able to give a little bit back to people who’ve had to go through similar situations.”

Steadfast HTX plays For Kids’ Hearts Second Annual Punk Rock Show & Skate Jam, Saturday, June 11, noon to 9 p.m. at Southside Skatepark, 510 Iowa. With 30footFALL, The Suspects, Monster Soup, Dead To The World, Ferst Person, Dream Shake, As We Shiver, On Tonight and Animosity. All ages, $10, benefitting pediatric heart patients and their families.
KEEP THE HOUSTON PRESS FREE... Since we started the Houston Press, it has been defined as the free, independent voice of Houston, and we'd like to keep it that way. With local media under siege, it's more important than ever for us to rally support behind funding our local journalism. You can help by participating in our "I Support" program, allowing us to keep offering readers access to our incisive coverage of local news, food and culture with no paywalls.
Make a one-time donation today for as little as $1.