Andy Aledort and Alan Paul onstage together. Photo by Tore Claesson/Courtesy of St. Martin's
It’s October 3 when Alan Paul and Andy Aledort – co-authors of the new biography Texas Flood: The Inside Story of Stevie Ray Vaughan – are on the phone. The date is appropriate because it would have been the 65th birthday of the book’s subject, had he not died tragically in a 1990 helicopter crash shortly after leaving a performance.

So in the public mindset, the Texas blues rocker is permanently and forever 35 years old, sporting his chin goatee, wide-brimmed black hat, and decked out in colorful garments as his fingers move effortlessly over his guitar neck while singing in his distinctive low voice.

Stevie Ray Vaughan in 1988 for a "Guitar World" cover shoot.
Photo by Jonnie Miles/Courtesy of St. Martin's
Both singer/guitarists themselves, Paul and Aledort reflect on what that frozen-in-time mentality means not only for Vaughan, but other music legends who died young or at the height of their careers.

“I played with Billy Cox, who played bass with Jimi Hendrix. He liked to say as a joke ‘All of us got old, but Jimi is always going to be 27! He didn’t turn into an old person!’” Aledort says. “But it’s still a sad thing whether it’s Buddy Holly or Otis Redding or Stevie, who was at the peak of his powers at the time.”

Texas Flood will likely go down as the definitive work on the life and music of Stevie Ray Vaughan, the only other tome being a 1994’s Stevie Ray Vaughan: Caught in the Crossfire by Texas music journos Joe Nick Patoski and Bill Crawford (the book’s research files reside in Texas State University’s Wittliff Collections).

Paul and Aledort will appear at Cactus Music on October 25 at 5:30 p.m. for a Q&A, book signing, and short performance of SRV music. The Houston Press reviewed the book upon its release, and the next month it debuted at No. 12 on the New York Times Bestseller list for hardcover nonfiction.

Texas Flood benefits from not only the time that’s passed to assess Vaughan’s musical impact (he was inducted into the Rock and Roll Hall of Fame in 2015 along with his backing band, Double Trouble), but also because it had the active participation of Vaughan’s family and closest friends. That includes older brother Jimmie Vaughan, who’s had a stellar career of his own and was Stevie’s first and most important musical influence.

Paul and Aledort could not be more qualified to handle this book. The pair first met in 1994 when both were (and still are) writers for Guitar World magazine. “We bonded because we liked the same music, so we found ourselves together all the time since we were going to the same shows like Buddy Guy, B.B. King, Bob Weir, Gov’t Mule, and the Allman Brothers,” Paul – who would later pen the 2014 Allman Brothers Band bio One Way Out – recalls.

Andy Aledort and Alan Paul play some Stevie Ray Vaughan music during their August appearance at Brazos Bookstore.
Photo by Bob Ruggiero
Having written about and interviewed both Stevie Ray and Jimmie many times over the decades, the pair decided to collaborate on the book about four years ago. They pooled both their archival resources as well as starting on fresh research and interviews.

“I had the opportunity to interview Stevie four times starting in 1986, and have seen him play even more,” Aledort says. On Guitar World assignments, Aledort would often bring along his guitar and amp, do a traditional interview, then ask his subject to show him something to play with the transcribed music included as part of the article.

“On that first time, we spontaneously just started to play together for about ten minutes,” Aledort continues. “Then I unplugged my guitar and Stevie said ‘What are you doing?’ and I said ‘I have to interview you now.’ And he said ‘Oh...I thought we were just going to have fun…’” 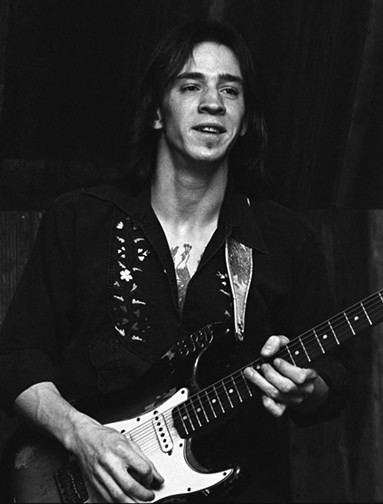 Stevie Ray Vaughan in 1977.
Photo by Ken Hoge/Courtesy of St. Martin's
Getting the trust of Vaughan’s family was crucial to making the book happen. And in addition to their past with the brothers, Aledort had also done liner notes on a string of SRV reissues.

“We both, separately, had long term relationships with Jimmie. We didn’t have an ulterior motive of doing a book,” Paul says. “Nobody could call him up out of the blue and say ‘Hey, I want to do a book about your brother.’ But he liked us and trusted us.”

Paul and Aledort both told Jimmie Vaughan about their intentions. And while he didn’t offer a ringing endorsement…he didn’t quite reject it outright either.

A music biz associate and Vaughan family friend, Beverly Howell, helped pave the way with the Vaughan cousins for participation. And once Jimmie gave his approval for them and others (as well as himself) to talk to the authors, things started really moving.

Texas Flood is written mainly as an oral history, and followed the life and career of Stevie Ray Vaughan beginning at birth. But Vaughan also had debilitating drug and substance abuse problems that wreaked havoc on his body, his relationships, and his career.

“During those difficult years when he was really scuffling, what we learned and what was kind of shocking was what a disaster his personal life was, mainly due to drugs and substance abuse,” Aledort says.

“The couch-surfing, the not bathing for a week, and no one knowing where he was an hour before the gig. I made the analogy to Charlie Parker. Once he was onstage, everything was great. But the second the gig was over and he left the stage, his life was in shambles. Stevie was a lot like that. Not with his band mates, but things like romantic relationships and [financial] issues.”

But the book does end with Stevie Ray Vaughan in a good place, as he eventually cleaned up completely, embraced sobriety, and began preaching it with an almost evangelical zeal. There’s no shortage of irony that at the time of his death, Vaughan was poised for even greater success and musical journeys with a now clear-eyed road ahead of him. It was this part of the story that the authors found most surprising in the course of their research.

“The depths he had fallen to was surprising,” Paul sums up. “But when he got better, he really embraced it and dug deep. He wanted to get back to the person he was and make amends. And after he cleaned up, he was really into helping other people.”

Alan Paul and Andy Aledort’s Author Session is at 5:30 pm on October 25 at Cactus Music, 2110 Portsmouth.  For information call 713-526-9272 or visit CactusMusicTx.com. Free.
KEEP THE HOUSTON PRESS FREE... Since we started the Houston Press, it has been defined as the free, independent voice of Houston, and we'd like to keep it that way. With local media under siege, it's more important than ever for us to rally support behind funding our local journalism. You can help by participating in our "I Support" program, allowing us to keep offering readers access to our incisive coverage of local news, food and culture with no paywalls.
Make a one-time donation today for as little as $1.