America at the London Palladium in 2018: Rich Campbell, Dewey Bunnell, Ryland Steen, Gerry Beckley and Steve Fekete. Photo by Christie Goodwin
Among Beatlemaniacs, there’s a famous 1963 interview clip of the Fab Four in which they’re asked what the future might hold when the bubble inevitably bursts on their showbiz career. Ringo Starr—apparently serious—said that he fancied opening a string of ladies’ hairdressing salons. 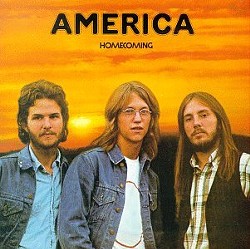 Dan Peek, Gerry Beckley and Dewey Bunnell
Record cover
The idea that a pop or rock group could have a healthy career lasting even five years was thought of even by the bands themselves as an impossibility. Flash forward to 2022 and so many groups are out there (in some form) on the road having celebrated their 5-0 anniversary.

And while the pandemic put a stop to a lot of those plans, some groups are using, uh, creative math. And that includes America, continuing the “50th anniversary tour” of their 1970 birth. They will appear at the Miller Outdoor Theatre on April 15.

“We had no idea we’d still be out here playing these songs!” says founding member Dewey Bunnell from his home. “The parameters were making it last five years, and that was the total lifespan for a group. In our cases, we didn’t have other careers to look toward or fall back on. We came straight from high school! We had no mindset other than playing music and following our noses.”

As for being on the road, America logged 39 dates last year with 54 planned in 2022. Though some are still being shifted around the calendar for COVID-related reasons. “It’s good news to play live again. The band just wanted to be together and play together. I didn’t like spinning our wheels the past couple of years,” he says.

America was started by three singer/guitarist friends in their late teens: Bunnell, Gerry Beckley and Dan Peek. They took the name as a tribute to their home country while living with their military families, all stationed in England.
The first album in 1971 began a considerable string of hits including “Ventura Highway,” “Lonely People,” “I Need You,” “Sandman,” “Tin Man,” “Don’t Cross the River,” “Sister Golden Hair,” “You Can Do Magic,” “Only In Your Heart,” and their first hit and signature tune “A Horse with No Name,” written and sung by Bunnell. Peek left the band in 1977 for a career as a solo Christian music artist and passed away in 2011.

Bunnell and Beckley have carried the flag on the road and in the studio for decades, and now see three generations of families in their audience. With the youngest of those now able to listen to the entire catalog of America at the touch of a screen on their phone.

“Isn’t that incredible? Spotify and the whole streaming situation had made access to music—all music—incredibly instantaneous. I love that concept to immediately bring a song to your head that you’re thinking about,” Bunnell says.
He himself has used streaming and YouTube to not only investigate deeper cuts by bands and performers he already knows and likes, but really “introduce himself” to other performers for the first time. He brings up English singer/songwriter/guitarist John Martyn.

“There’s no excuse to not hear an artist you’re interested in. And you don’t have to try and sift through piles of records in a store. If they even had a John Martyn record!”

Bunnell and Beckley participated in the writing of a recent authorized biography of the group by journalist Jude Warne, who in 2020 spoke with the Houston Press about the project.

“I don’t think an autobiography is a concept that we could have done ourselves. But it was about time for a [book] on us,” Bunnell says. “We talked to several people, but Jude just had this outline to approach the book [concentrating] on the music itself. It was really well done. And she left no stone unturned!”

Dewey Bunnell and Gerry Beckley.
Photo by Christine Goodwin
Because they have so many recognizable songs, about 2/3rd of the average America set list are set in stone “must play” tunes that the audience knows and wants to hear—otherwise, the pitchforks will come out. Bunnell knows this, but still likes to toss in a deeper cut for the hardcore fans, especially from the first few albums like “Moon Song” and “Rainbow Song.” The current band also includes Rich Campbell (bass), Steve Fekete (guitar) and Ryland Steen (drums).

“Some of the songs we’d like to do just won’t [adapt] from the recorded version to a live setting. You can’t capture the moment as well,” he says. Though they are including some material from 2015’s Lost & Found compilation of older and unreleased material.

Bunnell says this just as some whirring noises commence in the background. “Our printer is in this office and my wife is printing some recipe,” Bunnell laughs. Which begs the question: What is Penny Bunnell whipping up to eat tonight?

“It’s maple balsamic glazed carrots!” he says. “Though it may not be for tonight. My wife is a really good cook!”
Over the course of America’s career, bandmate Gerry Beckley has put out several solo efforts, with the latest, Aurora (Blue Élan Records) dropping soon. But Dewey Bunnell has never gone out on his own. Why?

“Well…that guy Gerry Beckley…he’s just a fountain of prolific works!” Bunnell laughs. “But I kind of made a conscious decision that I was never going to do that myself, though I never slammed the door on it. But you have to be driven, and Gerry definitely is. That’s his creative bent and I support that 100 percent. He’s got so many songs in his archives and on his hard drive. I’m even on one song on his new record!”

One thing both men are excited about and are working to see come out is a rare 1975 live recording of the band at the Hollywood Bowl. A show at which the “opening act” was legendary Beatles producer George Martin conducting an orchestra of classical and pop tunes with a program titled Beatles to Bond and Bach. Martin had a close relationship with America as producer of their records Holiday, Hearts, Hideaway, Harbor (they apparently loved the letter “H”) and then Silent Letter.
Bunnell says it’s something he especially wants to see released as it would be the band’s first live record release to feature Peek and are working out licensing and permission issues.

Speaking of Peek, Bunnell says questions about what happened to him when he gives interviews are almost as prevalent as “How did you get the name America?” and “What’s the meaning of ‘A Horse with No Name.’” So…which question is he most tired of?

He’s glad to hear that the Houston outdoor show will happen after sundown, because there’s “a lot of really great video components” that go with certain songs they plan on projecting behind the band.

Finally, while his most famous song was written about a horse, he himself did not own any or even ride. That changed about five years ago when he and his wife purchased a mustang that they named (wait for it…) “Nonami.” Get it? The animal even made a cameo appearance during a profile on the band that ran on CBS Sunday Morning in 2019.

“Yes, we still have her!” he laughs. “I’m a very novice horse owner and actually have been very wary of horses, even afraid of them. But she’s doing great and has had more training. Of course, she’s still begging for crumbs. And you have to be careful she doesn’t step on your foot!”

Which Nonami just might do later—that is, if there’s maple balsamic glazed carrots in the offering.

America is 8:15 p.m. on Friday, April 15, at the Miller Outdoor Theatre, 6000 Hermann Park. For information, call 832-487-7102 or visit MillerOutdoorTheatre.com. Free, but covered seated tickets should be reserved in advance online.

For more on American, visit VenturaHighway.com
KEEP THE HOUSTON PRESS FREE... Since we started the Houston Press, it has been defined as the free, independent voice of Houston, and we'd like to keep it that way. With local media under siege, it's more important than ever for us to rally support behind funding our local journalism. You can help by participating in our "I Support" program, allowing us to keep offering readers access to our incisive coverage of local news, food and culture with no paywalls.
Make a one-time donation today for as little as $1.