Art Alexakis on Three Decades of Everclear, Making Noise and His Own Future Path 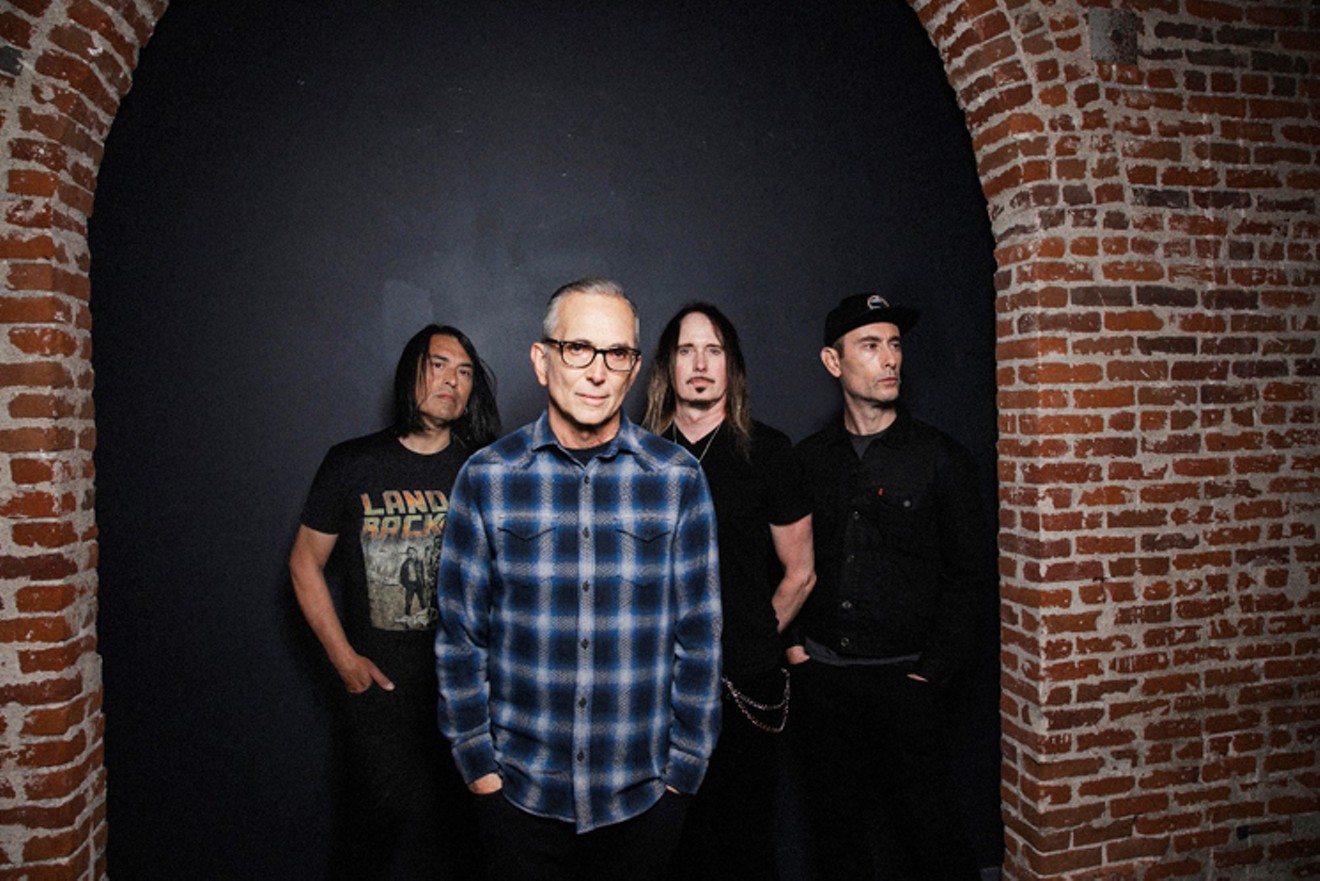 Everclear in 2022: Freddy Herrera, Art Alexakis, Davey French and Brian Nolan. Photo by Ashley Osborn/Provided by Press Here Publicity
When we spoke with Art Alexakis of Everclear in July of last year, the band’s founder/singer/guitarist was literally a day away from launching their Summerland package tour trek across the U.S. One that already filled him with equal amounts of excitement and nervousness, given the whole pandemic situation.

“It was weird. But we had a very strong COVID protocol with about 48 people on the tour for ten weeks. And not one person got COVID,” he says now on the phone from his car. “It’s something to be proud of, but it was also a pain in the ass! I had to be people’s fucking babysitter. And I didn’t want to be! I wanted to play rock and roll!”
He adds that audiences were “light,” but often because of something not unique to Summerland. People bought tickets in advance and then—for whatever reason—chose not to show up.

“It was a really good tour. But they just decided at the last minute they didn’t feel safe. And I get it. I had COVID really bad, and it was rough” Alexakis—who also lives with MS—offers. “This year, I’m feeling a different vibe!”

While Everclear will begin a summer tour this June celebrating the 30th anniversary of the band’s 1992 founding, they’ll be making several earlier one-off appearances at festivals. That includes a headlining slot on day 2 of Houston’s Bikes on the Bayou on April 23. Everclear’s current lineup includes Alexakis, Davey French (guitar), Freddy Herrera (bass) and Brian Nolan (drums).
The creative force behind so many ‘90s/’00s alt-rock anthems like “Santa Monica,” “I Will Buy You a New Life,” “Father of Mine,” ”Everything to Everyone,” “Wonderful,” “When It All Goes Wrong Again,” "AM Radio," and “Volvo Driving Soccer Mom” has a lot to say about upcoming big another project near to his heart. But first, he’s got to place and pay for his order in a Starbucks drive-through lane. Which includes for his interviewer, a chance to hear said order in real time. Which we will not disclose.

“All right, no judging! Don’t judge another man’s coffee, you can’t do that!” he laughs while pulling up to the pay window. When told this writer just drinks his daily caffeine unadulterated black, he responds with mock indignation.

“Well, that’s because you’re better than us! I wish I could do it!” he says. “My guitar player is like ‘Oh, it’s delicious with nothing in it,’ and I’m like, ‘Fuck you!’”
In addition to the summer tour (which will find Austin’s Fastball and Oklahoma’s-by-way-of-Dallas the Nixons opening), Alexakis is bringing it back to where it all began. He’ll be reissuing Everclear’s long out-of-print debut full-length record, 1993’s World of Noise, with bonus material both on vinyl and digitally. It was the release before their 1995 breakthrough Sparkle and Fade.

As he tells it, Alexakis and Freddy Herrera finally decided to tackle sifting through the band’s voluminous—but unorganized—storage archives. He was stunned to find not only the original master tapes for the World of Noise sessions, but artwork and materials stretching back to his previous group, Colorfinger.

“Those tapes are already baked, transferred and I’m going over there today to send it to master,” he says. Before stopping to pick up his coffee order from an extremely chipper guy out the to-go window.

Record cover
“Wow. They’re so nice. Such nice young people!” Alexakis says. “I wasn’t like that in my 20s, I was carrying a gun. I’m not kidding you!” As a teen, he lived in nearby Alief and then moved to Katy while living with his divorced father and his new family. The proximity to Houston was too tempting for the budding musician.

“I was hanging in Montrose and at Fitzgerald’s. In the ‘70s and ‘80s, Montrose was scary. I’m sure it’s gentrified now. And that sucks. Every city should have a neighborhood like old Montrose,” he reminisces. “I’ve caught so many diseases on the floor of Fitzgerald’s. And again. I’m not joking!”

But back to Alexakis’ “Indiana Jones”-style excavation of the past. “There’s things that have never been released before, things that we’re going to put out that nobody has ever heard before,” he says.

Having relocated to Portland, Oregon from his California home base, Art Alexakis was desperate to make this record a success. He was 30 years old (pushing Father Time for a budding musician), with a pregnant girlfriend (and future, but now ex-wife) and broke.

“We were on welfare because we couldn’t afford to pay for the birth, so there was a lot of shame and anger going on. And that’s why that album is so angry,” Alexakis says today.

“It’s pretty in your face. There’s so much feedback in the guitar, that’s why it was called World of Noise. I couldn’t afford to put new tubes in my Fender amp. I would record a song and blue flame would be shooting out of the back of it. It was hot and squealing! A guy from the studio even got an ice pack that was for his wife’s back and put it on top of it to help cool it down so we could do another take!”
In fact, Alexakis paid for the band’s 10 hours of studio time by trading in a $400 guitar effects unit. “I wasn’t sure if what we were doing [musically] was working, I needed to hear it on tape. And if it wasn’t, I was going to cut bait. And then when I did, I said ‘This sounds like a fucking record. It’s noisy, it’s sloppy, and it’s good.’”

Alexakis put some of the songs on a demo tape and sent it out, blanketing clubs, music magazines, and newspapers in the northwest. And also to SXSW, where two weeks later he was told they had made the cut to play the Austin music festival on what he estimates was his fifth overall attempt.

On the way back from that show in an era before cell phones, Alexakis woke up to find about 10 texts from his girlfriend to call her immediately. He assumed the worst, that something was wrong with his daughter. So, the band stopped at a truck stop to call.

“She said ‘You’ve got like 147 calls on the answering machine offering gigs, wanting to do interviews. That tape you sent is freaking people out!’” he recalls.
After some tweaking, and a one song replacement, that demo became the World of Noise record. Alexakis says fans will get to hear that lost track, “Drunk Again,” with the reissue.

As for the upcoming Houston gig, Alexakis knows an outdoor festival crowd is different from a solo theatre gig, so they’ll mostly stick to the hits. Though he may include a World of Noise track or two and a new song, “You’re the Tiger,” set for an August release. He also mentions that fans can also make song requests via the Twitter at @everclearband.

Art Alexakis turned 60 a few days before this interview, one of those ages that end with a zero that make people take stock of and perhaps reassess their lives. He says there are still some musical things he’d like to accomplish—like playing Red Rocks in Colorado or the Forum in Los Angeles. He’d also love to play bass in a mythical all-star punk band and maybe sing a bit, so he doesn’t have to be “The Guy” in a band. But his real direction may go into another area entirely.

He's just completed and passed a year-long certification course to become a Master Life Coach. And he’s attending school to get certification as an alcohol and drug counselor (he’s been open about his own long-ago substance abuse struggles). He’s also on the road to earn a Bachelor’s Degree in Psychology.

“That’s the plan. I’m going to start counseling and coaching people. Creatives and creatives in recovery or sobriety. So, I’ll be giving back and making a living outside of the band,” he sums up. “That’s in my wheelhouse, for sure.”

Everclear plays at 9 p.m. Saturday, April 23, at the Bikes on the Bayou Festival, at Eleanor Tinsley Park off Allen Parkway. For information, visit BikesontheBayou.com. $20 ticket is good for entire April 22-24 festival and all live music.

For more on Everclear, visit EverclearMusic.com
KEEP THE HOUSTON PRESS FREE... Since we started the Houston Press, it has been defined as the free, independent voice of Houston, and we'd like to keep it that way. With local media under siege, it's more important than ever for us to rally support behind funding our local journalism. You can help by participating in our "I Support" program, allowing us to keep offering readers access to our incisive coverage of local news, food and culture with no paywalls.
Make a one-time donation today for as little as $1.