Circles Around the Sun: The "Accidental" Jam Band Circles Around the Sun is (from l to r): Mark Levy, Dan Horne, Neal Casal, and Adam MacDougall Photo by Jay Blakesberg/Courtesy of Kevin Calabro Music
Neal Casal wasn’t expecting that a one-off, one-gig assignment would turn into a completely new and ongoing musical endeavor. But that’s exactly what happened in the summer of 2015 when the guitarist was asked by the Grateful Dead management to record some original instrumental music to be played for tens of thousands of concertgoers in between sets during that group’s short series of massive “Fare Thee Well” concerts. 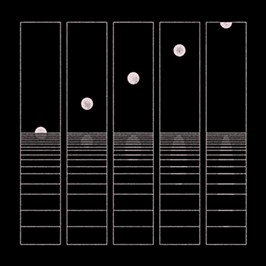 "Let it Wander" by Rhino Records
Casal recruited keyboardist Adam MacDougall (a bandmate in the Chris Robinson Brotherhood), and musician friends Dan Horne (bass) and Mark Levy (drums) to create the music. Reaction among the Deadheads was so strong there was a demand for a record. Suddenly needing a name for the group, the quartet deemed themselves Circles Around the Sun and released Interludes for the Dead.

“Right from the beginning at those shows, we realized that people really liked it. There was an instant reaction to the music,” Casal says. “We didn’t have a name for the project, it wasn’t supposed to be released or even heard again, and there was no thought of anything further. We were all busy with our other bands! But it just snowballed.”

An offer to play the jam band-friendly Lock’n Festival followed, and the music went over even better live than on massive speakers. The now-for-real band (dubbed by fans “CATS” for shorthand) has just released their follow-up, the double album Let it Wander (Rhino Records) and are embarking on a tour playing their instrumental and mind-expanding sonic journeys (though their "One for Chuck" features a brief hype intro from Public Enemy frontman Chuck D, who dropped by the studio while the band was recording).

“We’ve only played 20 or 30 shows as a band so far, but we have really great chemistry as a group and there’s such goodwill around this band, there was no reason not to take it further,” he continues.

As to what CATS could do with the second record they couldn’t on the first, Casal says it was pretty simple. “It was really the same concept, minus the Dead themes or having light references to their songs here and there. Now, we realize that we have a sound as a group on our own that has nothing to do with the Dead. We have our own identity and something to say.”


For the songs on Let it Wander (two of which, titled “Halicarnassus” and “Ticket to Helix NGC 7293” clock in at more than 19 minutes apiece) Casal says there’s more funk and even Kraut Rock influences. But what Circles Around the Sun really wants to be is: a dance band.

“I was always a singer/songwriter who was telling stories lyrically, but we don’t have that with Circles. I just want to make people dance!” Casal laughs. “We do get into the improvisational stuff and psychedelic realms, and I love that. But I want to get a room moving and keep them moving until the show is over. It’s hard to keep people’s attention as an instrumental band if you’re not world class shredders, and we’re not in the way a lot of the really amazing next-level musicians are in the jam scene.”

Casal and MacDougall, of course, have played for years together and have an active touring and recording schedule in the Chris Robinson Brotherhood. Led by the former front man of the Black Crowes, the CRB’s latest studio effort Servants of the Sun drops on June 14. And while that gives the pair an inherent chemistry, it’s not as if Horn and Levy are left out of any musical bond. Horne, Levy, MacDougall, and Casal ponder a plant-based diet.
Photo by Matthew Mendenhall/Courtesy of Kevin Calabro Music
“I have a history with Dan as we’ve played together in different band, including now with the Skiffle Players with Cass McCombs,” he says. “And Mark and Adam were friends before all of this. So while it’s true that Adam and I have this sort of language with our instruments, it wasn’t four strangers coming together to try and find a sound. Adam and I had something built, and they were able to jump in. It’s a very simple alphabet. Dan’s even in a Grateful Dead cover band called the Grateful Shred! He’s such an ideas person.”

As for being an all-instrumental unit, Casal notes there are pros and cons to not having vocal melodies and lyrics stories to wrap any playing around. “You have to do all the talking on your instruments the entire night,” he offers. “It’s not easy to do…especially if you don’t have a large musical vocabulary. And I don't! On guitar, I have to make a little go a long way.”

The current runs of shows for Circles Around the Sun continues through mid-May, then picks up at the end of the month for another short run through June, after which he and MacDougall will start a CRB tour. Another CATS record and tour will follow after that, with a return date for that band to the Lock’n Festival.

Casal remembers his first Houston gig with the CRB at Fitzgerald’s (“It was like playing in someone’s house!”) and notes that a lot of the “best music ever” comes from Texas. As well as at least one other thing in his life.

“I used to be married to a girl from Dallas many years ago…but I know there’s a great rivalry with Houston!”

Circles Around the Sun plays 7 p.m., April 28, at the Last Concert Café, 1403 Nance, $15-$20. Call 713-226-8563 or visit LastConcertCafe.com. For more on Circles Around the Sun, visit CirclesAroundTheSun.com
KEEP THE HOUSTON PRESS FREE... Since we started the Houston Press, it has been defined as the free, independent voice of Houston, and we'd like to keep it that way. With local media under siege, it's more important than ever for us to rally support behind funding our local journalism. You can help by participating in our "I Support" program, allowing us to keep offering readers access to our incisive coverage of local news, food and culture with no paywalls.
Make a one-time donation today for as little as $1.