Dub Miller Heads to Houston from the Hill Country 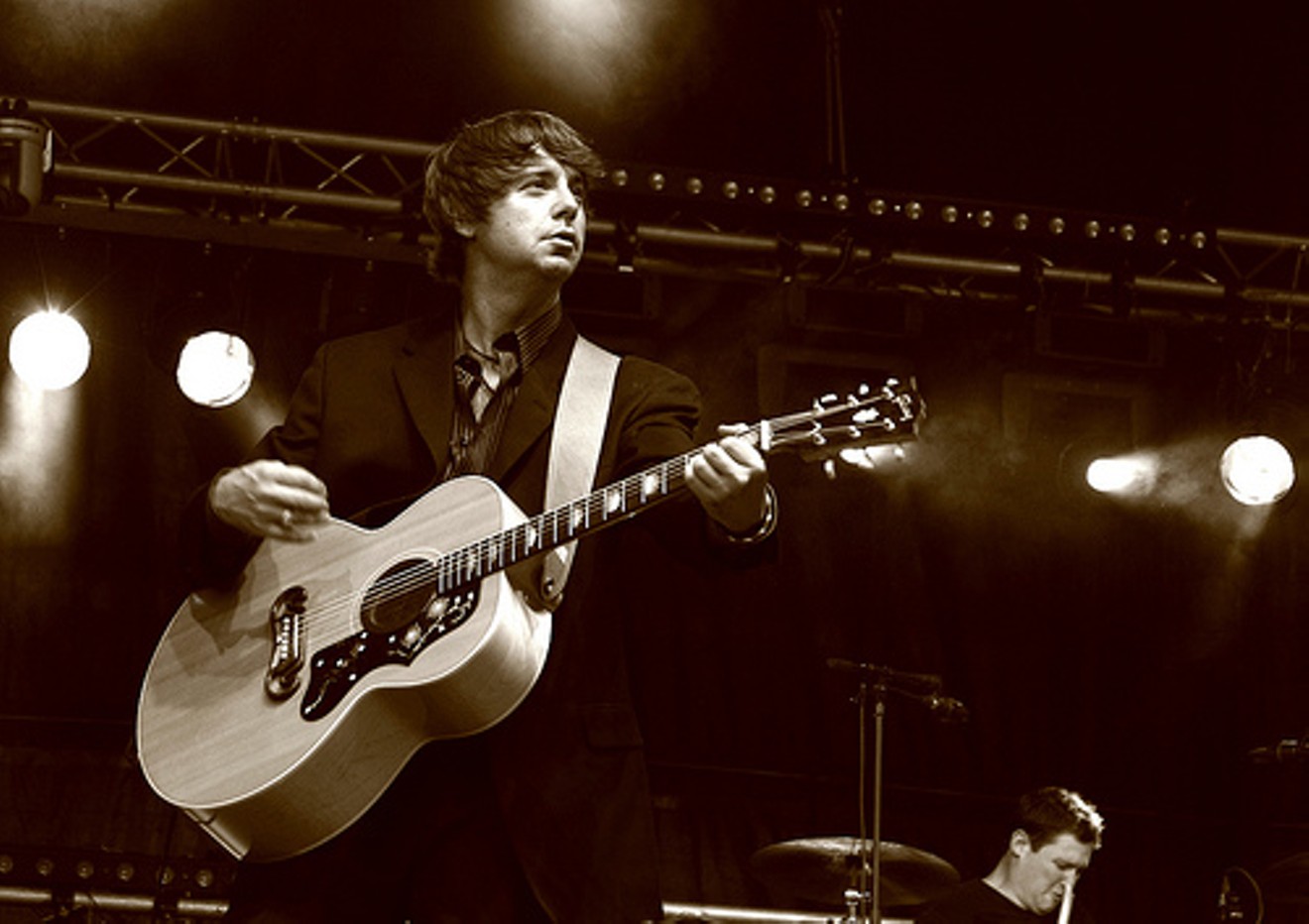 Dub Miller actually raised his profile during the pandemic—without playing live concerts. Photo by Lluis Salsa/Courtesy of Dub Miller
When it’s time to place a call to Texas singer/songwriter/guitarist Dub Miller at the appointed interview time, a recording says that the number is unavailable. He quickly calls back about 30 seconds later, but wonders aloud if others calling him get the same message. “It could be Willie Nelson calling to record a duet and you’d miss it!” I offer. But it turns out, that’s not too crazy a thought.

Miller recalls how he was booked for a show years ago by Pat Butler, whose husband—songwriter/producer Larry Butler—was a running buddy of Nelson’s back in day. He also produced massive hits for Kenny Rogers and co-wrote with Chips Moman the B.J. Thomas hit “(Hey Won’t You Play) Another Somebody Done Somebody Wrong Song.” 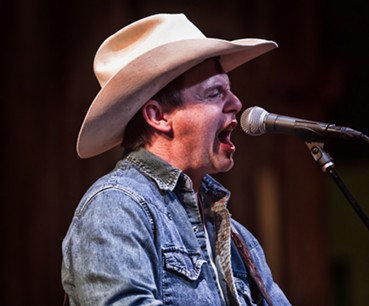 Dub Miller onstage.
Photo by Ray Keeling/Courtesy of Dub Miller
“It was a county fair type of thing for three nights with big outdoor stage, and we were headlining one night. Pat came up to us with her deep, cigarette voice and said ‘You’re Dub Miller? I’m anxious to meetcha!’” Miller says, while imitating said raspy voice.

Confused as to why Butler booked him for such a prestigious slot seemingly without ever hearing a note of his music, she explained it succinctly. “Yeah, Willie told me you were good. And that I could get you for cheap!” Further confused, Miller – who had never met Willie – asked how that could be. Butler responded “Oh, he’s seen you play. He can slip in and out of a place and you’d never know!’”

Nelson will probably not be slipping in and out of the Cowboy Surfer Bar when Miller plays his first Houston show “in a long time” on March 23, but the performer is happy to be playing anywhere after the past year. This will be his first major gig, outside of a “few little things” he did out in the Hill Country. Surprisingly, 2020 actually worked out better for him in some ways.

“[The pandemic] turned out to be a blessing in disguise, because it’s actually helped my name get out there and be more visible,” Miller says. As part of an informal group called “The Sequestered Songwriters,” Miller and musical cohorts would pick a performer to pay tribute to, play a song on their Facebook Live social media, and then in round-robin fashion, direct viewers to the next performer’s page where the virtual concert would continue.

Unfortunately, many of those events have paid tribute to a number of country/ roots music legends who’ve died in the past year like John Prine, Jerry Jeff Walker, and Billy Joe Shaver. The Sequestered Songwriters now have their own Facebook page for a “one-stop spot” to watch the weekly guitar pulls.


Miller’s own life has reflected some of the wandering and job-jumping characters in his songs. Born and raised in Pontotoc, Texas, Miller became interested in music while in high school, drumming for a heavy metal band. He took this tubthumping skills to Texas A&M, playing in the drum corps and forming a local band (Miller’s song “Fightin’ Texas Aggie” is beloved by many students and alumni).

He relocated to South Plains College in Levelland, eventually meeting a group of friends who formed his backing unit, the Highway 6 Band. They played hundreds of shows and Miller released two albums, American Troubadour (2001) and the next year’s Post Country.

But Miller’s personal and professional lives took more turns as he quit music and touring, got married (later divorced and remarried), enrolled in law school (finishing two of three years), then worked in concert promotions. The “gypsy life on the road,” thoughts of how to raise a family, and the economic uncertainty got to him.

Dub Miller today.
Photo by Mandy Miller/Courtesy of Dub Miller
“I wanted to make my music the way I wanted to make it. And if I could get away with that, that’s great. It’s an art project,” he says. “But I never got into the business part of it, and I thought there were better ways to make money.” By 2015, he reignited his music career and released the live archival Lost/Live and new material on The Midnight Ambassador the next year.

That most recent record features a wide range of material including uptempo numbers like “Mandi Jean” and “Big Chief Tablet” to more meditative fare like “Broken Crown,” “The Last Church Bell,” “The Day Jesus Left Odessa,” and the title track, ending with the profane-filled “Sailboat Song.” But one number does truly stand out: the 8+ minute epic “Ain’t No Cowboy.”

In it, a traveler stops for gas in a small town and encounters an old weathered-looking man on a porch. Sensing the elder person is the real deal, the traveler asks for reflections of his life, but with a definition of “cowboy” more like John Wayne movies or rodeo heroes than an actual working rancher/rider. “Son, I ain’t no cowboy/Not the way you mean/I'm just trying to make a living off the land,” the earworm chorus goes as the man remembers his hardscrabble life.

It turns out that Miller wrote much of “Ain’t No Cowboy” on the way to the funeral of his grandfather, who shares more than a passing resemblance to the title character. Miller says he even pulled the car over on the way so his girlfriend could take the wheel while he wrote down words and musical ideas.

It turns out that Dallas Miller was a real-life rancher and cattleman who lived past his 90th birthday. “He was the last generation of those old time ranchers that saw the horse turn into the automobile, that gap between the Old West and modern day. I grew up on the ranch halfway between Brady and Llano,” Miller recalls. He also notes that Grandaddy Dallas had a finely-honed skill of guessing the weight of a cow. But he didn’t limit that talent to bovine subjects.

“He got pretty good at that. He could look at a cow and judge the weight pretty close. It was kind of a game with him,” Miller laughs. “But later on, I’d have to warn my girlfriends ‘You’re going to meet my granddaddy. He’s gonna ask you how much you weigh. And don’t lie to him because he’ll know!’ He was blind as a bat but could look at a girl and try and figure it out!”


As for the Cowboy Surfer bar, they’ve booked a series of Sunday shows by roots/alt-country/”Red Dirt” artists (even though technically the last moniker is for Oklahoma-based acts). Jim Jard — who co-owns the bar with Jack Massing (formerly one half of Houston art institutions The Art Guys), and Carl Eaves — certainly has the connections. A tour of the bar shows an entire back wall of some of his friends, famous and not, holding "Trump Don't Surf" signs (including ZZ Top's Billy Gibbons...taken at Jard's home).

So far, bigger names like Ryan Bingham (with whom Jard has a close relationship), Mike Stinson, and 81-year-old Swamp Pop legend Tommy McClain have performed there. And Charlie Sexton, Mark Andes, Bill Carter, Clay Farmer, Mike Barfield, and others have called him and expressed interest in playing a place with a capacity of just 50 or so attendees.

"We really wanted to be a neighborhood bar, and have an intimate place to have a show. It's casual, and some of my musicians friends who will play in Austin or Dallas will come here the next night," Jard says. Though he knows that its somewhat nondescript location might at first make people wonder. "When Tommy McClain was here, he told me 'I've been all over the world and played Paris and Rome and now I'm playing a goddamn strip center in West Houston! And we laughed at that together!" 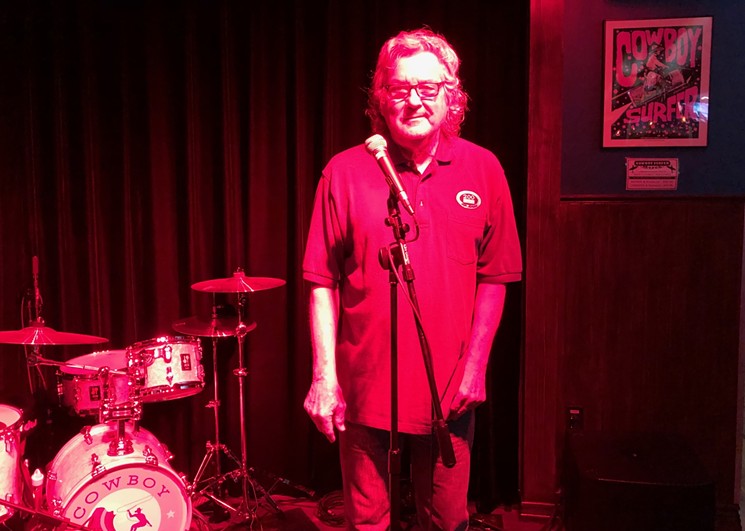 Jim Jard onstage at the Cowboy Surfer Bar. At the right is the new specially-designed poster by local artist Carlos Hernandez.
Photo by Bob Ruggiero
And in the bottom of the front of the stage at Cowboy Surfer Bar is engraved a quote from the Possum himself, George Jones: "When you're happy, you enjoy the music. When you're sad, you understand the lyrics." Seems to also sum up what Jard wants his audience to feel.

And while most of the music to date and scheduled has been of the roots/alt-country variety, Jard envisions adding blues and jazz and (yes) surf acts. He also wants to hold cultural programs and lectures on art and film and even motorcycle repair by local authorities on the subjects. He's already established an Open Mike Night on Wednesdays, which is picking up steam. "That's just taken off," Jard says. "And we provide some of the instruments. Of the nine people who played last week, I'd say only one was an amateur."

For this show Dub Miller, who lives in Castell, Texas (noting recently-deceased author Larry McMurtry called the area “the unfashionable Western part of the Hill Country”), plans on bringing a bass player and a fiddle player to Cowboy Surfer bar. Though he’s not all that sure the latter will make it to the show.

“The bass player is from Houston and the fiddle player…he’s sort of a ward of the world. There’s no telling where he’ll be. There’s a 30% chance he won’t show up!”

For more on Dub Miller, visit DubMillerBand.com
KEEP THE HOUSTON PRESS FREE... Since we started the Houston Press, it has been defined as the free, independent voice of Houston, and we'd like to keep it that way. With local media under siege, it's more important than ever for us to rally support behind funding our local journalism. You can help by participating in our "I Support" program, allowing us to keep offering readers access to our incisive coverage of local news, food and culture with no paywalls.
Make a one-time donation today for as little as $1.