The Wittliff Collections Save Texas Music History for the Ages...and the Public 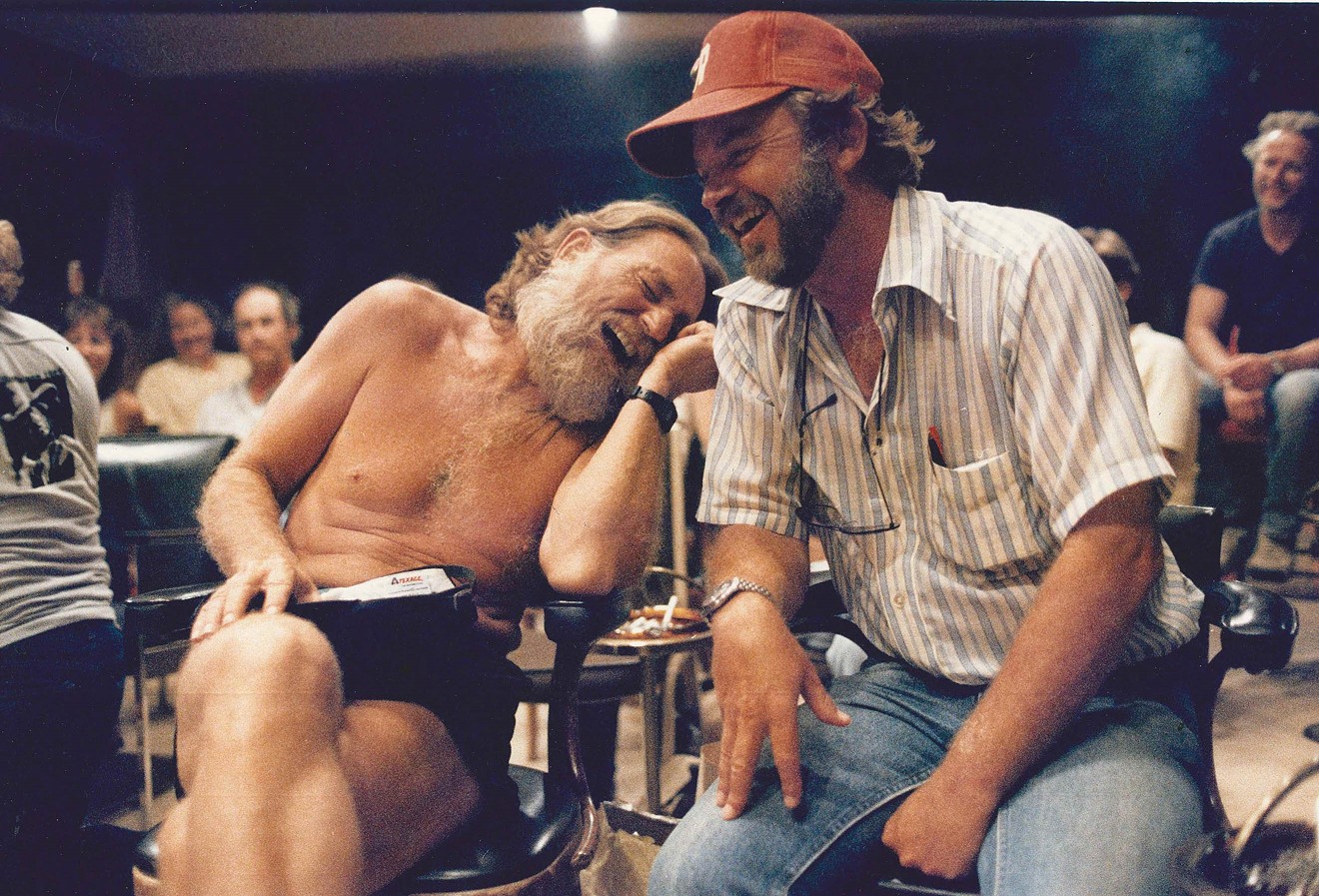 Willie Nelson leans on old friend Bill Wittliff on a movie set. Photo by Michael O'Brien/Courtesy of the Wittliff Collections at Texas State University
In the spring of 1956, 16-year-old William Dale Wittliff from Blanco, Texas decided that he really, really wanted to see a hot young singer named Elvis Presley who was giving a show at San Antonio’s Municipal Auditorium.

So he and two buddies got in a car with Wittliff at the wheel – never mind that he was not in possession of a driver’s license at the time – and made the 60 mile or so trip. They didn’t anticipate that the show would be sold out, though, so the trio climbed a tree outside the venue to see if they could sneak in or at least see something.

What they saw staring that them through the window was none other than the Future King himself, giving an interview in his dressing room. Presley opened the window and asked the boys what they were doing. When they told him their tale of woe, Presley tore off a piece of brown paper towel and wrote on it “Doorman, these are friends of mine. Please let them in – Elvis Presley.”

Jerry Jeff Walker on railroad tracks circa 1965. It was around this time that he was arrested in New Orleans and met the character named Bojangles in jail, who inspired his best-known song "Mr. Bojangles."
Photo by Anne Edwards/Courtesy of the Wittliff Collections at Texas State University
Later in life, William “Bill” Wittliff would do a lot of writing on his own. Mostly as a screenwriter on a series of projects with his friend Willie Nelson (Honeysuckle Rose, Barbarossa, Red Headed Stranger), and most famously – the script for the TV mini-series Lonesome Dove featuring Robert Duvall and Tommy Lee Jones.

He was also an accomplished photographer and inveterate collector. The latter passion led he and wife Sally to establish the Wittliff Collections at Texas State University in San Marcos. And while some of it features ample archives of art, photography, and literature from Texas/Mexican/Southwestern creators, its crown jewel is its still-growing Texas Music Collection, fast on its way to becoming one of the state and country’s premier of its sort.

“Our main mission is we’re a research center and archive that also functions as a museum, library, and gallery space. It’s all about preservation of arts in the Southwest. It’s a killer place!” says Hector Saldana, Texas Music Curator at the Wittliff Collections. He came to the Wittliff two years ago after a career as both a reporter with the San Antonio Express-News and longtime co-founder of the veteran Tex-Mex garage rock band the Krayolas.

Hector Saldana, the Music Curator of the Texas Music Collection of the Wittliff Collections.
Photo by Mark Willenbourg/Courtesy of Hector Saldana
And indeed, the list of individual collections reads like a checklist of Texas music. There’s extensive archives donated by not only Willie Nelson, but Jerry Jeff Walker and Ray Benson of Asleep at the Wheel. Others cover the long running Austin City Limits TV show and Antone’s blues club, Texas writers like Joe Nick Patoski and Jesse Sublett, research collections on Stevie Ray Vaughan and Selena, the Texas Western Swing Hall of Fame, and many others.

Houston audiences will get to learn more about the Wittliff Collections at an event September 17 at the Heights Theater. Ticket price includes a 30-minute acoustic concert from Texas music legend Joe Ely, a small display of the Collection’s music items, and food and drink. It is the first outreach event held in Houston, and the first of any at an actual music venue, thanks to Heights honcho Edwin Cabaniss.

“It’s a tribute to Bill and Sally Wittliff and their relationships with some of these people. We have a songbook that Willie Nelson made when he was 10 or 11. We have lyrics that are published and unpublished on the backs of envelopes and hotel stationary, including a draft of ‘On the Road Again,” Saldana says.

There are also items related to pioneering Texas women in music like singer Barbara Lynn, songwriter Cindy Walker, and singer/pianist Marcia Ball. Saldana is especially excited about two recent acquisitions that will considerably expand the Wittliff's holdings, and outside of country and rock.

One is from Austin-based record collector/shopowner/magazine publisher Doug Hanners, a trove of materials documenting the Houston R&B scene of the ‘40s through ‘60s with an emphasis on the belongings of producer Huey Meaux, along with items about Duke-Peacock Records and owner Don Robey. This includes personal scrapbooks, tapes, and “hundreds of original photos” of artists that Wittliff archivists are now identifying.

A second set of items from journalist/collector Ramon Hernandez has what Saldana calls “the most impressive Tejano collection in the country.” This includes materials about accordionists Flaco Jimenez and Esteban Jordan…along with one other big name.

“There’s stuff that I’m not at liberty to talk about…but there are some surprises,” he says. “Even in the world of Selena. I’ll leave it at that!”

A rendering of the proposed new Texas Music Gallery of the Wittliff Collections.
Rendering by McKinney/York Architects. Courtesy of the Wittliff Collections.
He’s also quick to stress that the Collections are not just things thrown in dusty boxes and accessible only to scholars. Anyone can make an appointment to see selections, and there will be more outreach programs, exhibitions, and panel discussions in the future. In fact, there are plans for a book and music in 2020 to mark the 50th anniversary of Jerry Jeff Walker’s influential progressive country ¡Viva Terlingua! record.

All of this is happening at the same time that Texas State University is doubling down on the Wittliff Collections, building an expansive new area that will give Saldana and staff “a football field’s worth of space” for music and photo galleries, office space, and archival processing space.

Sadly, Bill Wittliff will not be able to see any of it – he passed away unexpectedly on June 9 of a heart attack in Austin at the age of 79. A free memorial service and tribute to his life and work is planned for September 8 at 2 p.m. at Austin’s Paramount Theatre. Sally Witliff will be in attendance at the Houston event, along with Wittliff and Texas State University staff.

“Bill Wittliff was such a beautiful person. He was such a character and always at the right place in the right time,” Saldana sums up, noting that it’s even more important now for he and others to fulfill the man’s vision of what the Texas Music Collection can and should be.

“I want the Collection to expand the idea and [perception] of what Texas music is across all different [genres],” he says. “The Collection is also a living, breathing thing. It’s not just a graveyard of stuff, and there’s room for new discoveries. It’s a constant quest.”

The Texas Music Collection at the Wittliff event with Joe Ely is scheduled for 6:30-8:30 p.m., September 17, at the Heights Theater, 339 W. 19th. Tickets include wine, beer, light bites and a 30-minute Ely show. For ticket information, visit secure.touchnet.com. $50.

For more on the Wittliff Collections, visit thewittliffcollections.txstate.edu.
KEEP THE HOUSTON PRESS FREE... Since we started the Houston Press, it has been defined as the free, independent voice of Houston, and we'd like to keep it that way. With local media under siege, it's more important than ever for us to rally support behind funding our local journalism. You can help by participating in our "I Support" program, allowing us to keep offering readers access to our incisive coverage of local news, food and culture with no paywalls.
Make a one-time donation today for as little as $1.