Lou Christie Strikes Again in "Stars of the Sixties" 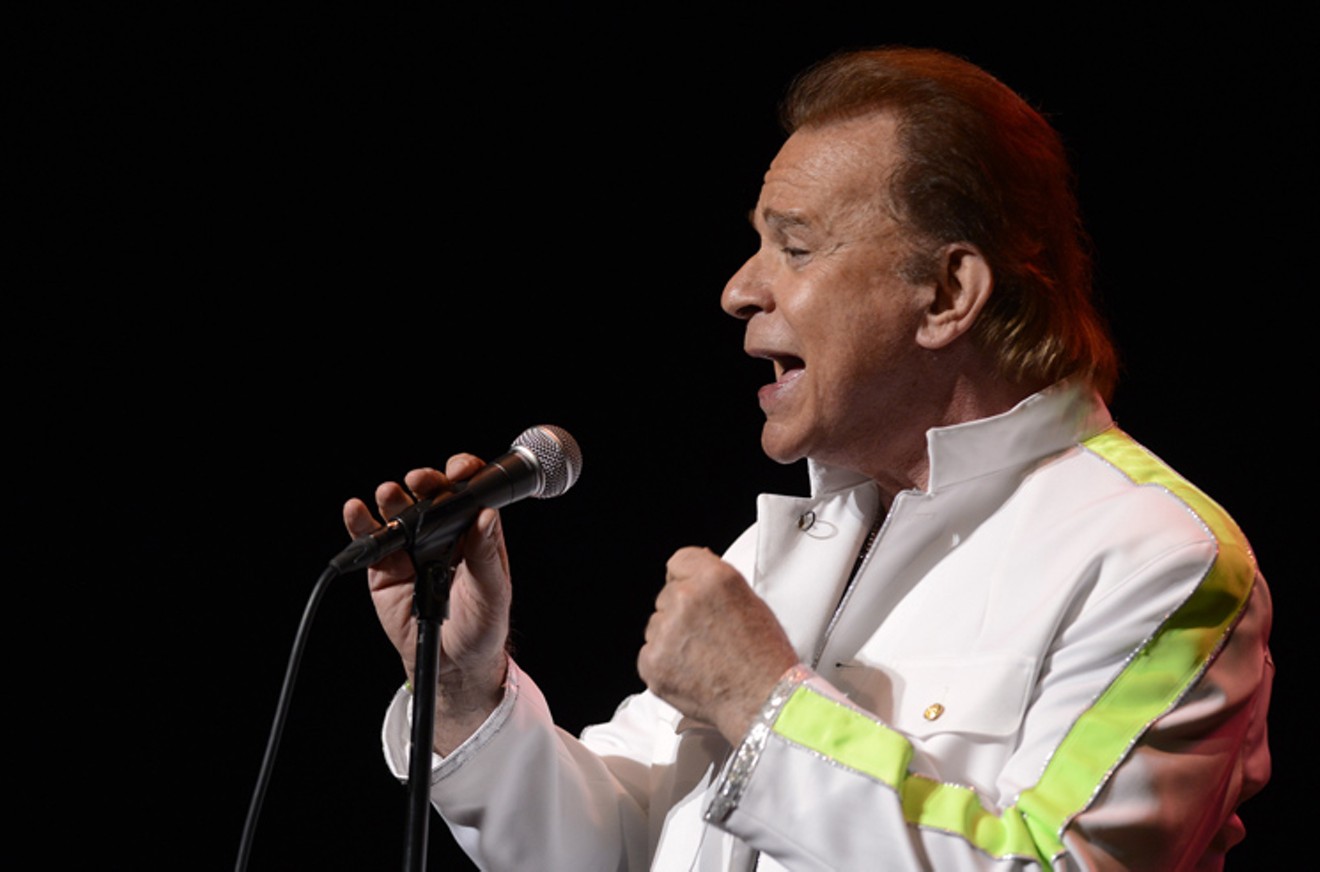 Lou Christie today: Still hitting the high notes. Photo provided by Fox Entertainment/Used with Permission
If you had a hit record on the Top 40 charts between 1959 and 1966, it was almost a rite of passage to get on a bus, crisscross the country, and play on a Dick Clark Caravan of Stars tour.

The amiable-but-business-savvy host of the incredibly influential American Bandstand would send acts out on the road across America, from big names (The Drifters, the Byrds, Herman’s Hermits) to mid-level (Jan & Dean, Gary Lewis and the Playboys) to…who are they? (Dale Wright and the Wright Guys? George McCannon III?). 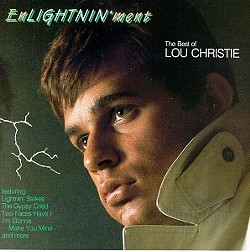 Record cover
In the fall of 1964, singer Lou Christie was on the bus. He already had hits with “The Gypsy Cried” and “Two Faces Have I.” His usual seat mate was a thin, up-and-coming singer with a vocal group called the Supremes: Diana Ross.

“She was my bus buddy, and I was fascinated by her. I thought ‘This girl is going to be a monster star!” he says today. “It was so exciting. I would run home to watch American Bandstand, then I got a call to be on it, then Dick Clark wanted me on the tour for 32 one-nighters in a row.”

Christie continues. “I was on that bus with so many great performers on that tour and others. And we did it! We slept on the bus sitting up every night driving 400 miles to the next show until we maybe checked into a hotel occasionally.”

Unlike today’s classic rock package tours that feature three acts and each with a generous set time, the standard practice during this era was much different. An average show (and not just the Clark tours) might include a dozen or more singers and bands.

They were efficiently shuttled onstage to perform their two, three, or (maybe) four recognizable hits, and then they were off. That still left a lot of time traveling by bus, where all the acts were packed together with little privacy.

But Christie also recalls darker times as the bus and its mixed-race passengers wound through venues in the Deep South.
“It was horrific. It was the first time I was aware of racism and what the Green Book meant. Even though we had ‘Dick Clark Caravan of Stars’ painted on the side, some people thought we were Freedom Riders.”

He remembers that some of the more unruly locals would throw stones at the bus or try to rock it back and forth when they stopped for gas. And bringing the entire troupe into a restaurant to grab a bite to eat was an impossibility.

“The places would say ‘Oh no, we don’t have enough food’ or give some other excuse. But Dick Clark said it would be all of us or none of us,” Christie recalls. “So, we’d send someone in to get hamburgers and we’d have to park the bus up the road and eat there.”

In terms of being a solo male singer, Lou Christie has often been lumped in with the various swoon-inducing Bobbys and Frankies and Tabs and Fabians. What Christie did that they usually didn’t was pen his own material. Most of it with Twyla Herbert, a classical pianist 22 years his senior who Christie first met when he was 15 at an audition with his vocal group the Crewnecks, which included his sister Amy.
Christie and Herbert wrote many scores of songs over the decades until she died in 2009, usually coming up with the title first and then the chords. “I didn’t set out to do that. The [record company] originally wanted me to sound like the Fleetwoods or something. So, the only way to sound like me was to write my own material,” Christie says.

“’The Gypsy Cried’ was the first song we wrote together, and my first million seller. But I thought everyone could sing in the world! My parents both did.” The half-Italian/half-Polish Christie was born with the name Lugee Alfredo Giovanni Sacco and raised on a farm near Pittsburgh.

“Everything my father planted, we ate, and everything he shot with a gun, we ate. It was a real Italian upbringing. My mother first saw my dad crawl out from under a car without his shirt on, and that was the end of him going into the priesthood. He was a hot Italian!”

The conversation then turns back to often eccentric Herbert. “She was a space cadet genius, and we never had a fight. We always just laughed all the time. We were voyeurs of life. It was like an acid trip when I was with her—though we never took it! She opened my eyes to see so many things in life.” They even collaborated on something of a protest/youth anthem with 1967's "Self Expression (The Kids on the Street Will Never Give In").
Two of those songs they co-wrote would also be big hits and showcase the trademark Christie falsetto: 1965’s “Lightnin’ Strikes” and the follow up the next year, “Rhapsody in the Rain.” But while the former would prove his most enduring hit and signature tune, it was the latter which got some extra attention—and not the good kind.

The tale of two young lovers using the backseat of a car for, uh, non-driving purposes and engaging in an activity that shared a rhythm with the working windshield wipers was considered too suggestive. And that’s even after Christie reluctantly changed the lyrics “We were making out in the rain” and “Our love went much too far” to the more benign “We fell in love in the rain” and “Our love came like a falling star.”

“Time magazine did an article and said I was corrupting the youth of the day. And I had priests and nuns and Catholic schools and PTAs calling me because it was too suggestive. That was weird! Christie offers. “Of course, it sounds like a nursery rhyme today!” Christie’s last major hit was 1969’s catchy-as-all-hell “I’m Gonna Make You Mine.”
Since then, Lou Christie has continued to release music and tour constantly, but the music industry has changed immensely. Not surprisingly, he’s not a fan of how music is consumed in today’s era of Spotify, YouTube and instant access to every song recorded in the past hundred years.

“You don’t get to spin a record or pick it up or buy it, you just blow in the wind, I guess. I used to love having a 45 and knowing the B-side or having an LP and reading the liner notes and looking at the pictures,” he says. “You ask anyone now what the No. 1 record is in the country, and nobody knows! But back then, it was part of your life!”

Unable to tour, Christie says he spent much of the past two pandemic years really, really enjoying his furniture. “I sat on my yellow couch for about a year and then I changed to my blue chair for another year,” he says. “It was unbelievable, and you try to look for the good in it, but it stopped everyone in their tracks.”
Christie says he did a lot of contemplating on his life, his decisions, his happinesses and resentments. “I thought about who I knew who had passed away, good friends I’ve known for a long time. Life just sat there, and you had to look at it with reality eyes. And sometimes, it was very frightening and upsetting.”

As for Houston, Christie recalls playing a gig with James Brown at the Astrodome in probably 1966, the year after it opened. The story will appear in the autobiography he wrote during the pandemic and hopes to have out at some point.

Lou Christie is now 79 years old. And many singers would face a steep—and even insurmountable—challenge of trying to match their vocal pitch and range from nearly 60 years ago. Much less a falsetto. But when asked what kind of training he does to keep his pipes in shape for those super high notes, his answer is surprising.

For more information on Lou Christie, visit Lou-Christie.com
KEEP THE HOUSTON PRESS FREE... Since we started the Houston Press, it has been defined as the free, independent voice of Houston, and we'd like to keep it that way. With local media under siege, it's more important than ever for us to rally support behind funding our local journalism. You can help by participating in our "I Support" program, allowing us to keep offering readers access to our incisive coverage of local news, food and culture with no paywalls.
Make a one-time donation today for as little as $1.