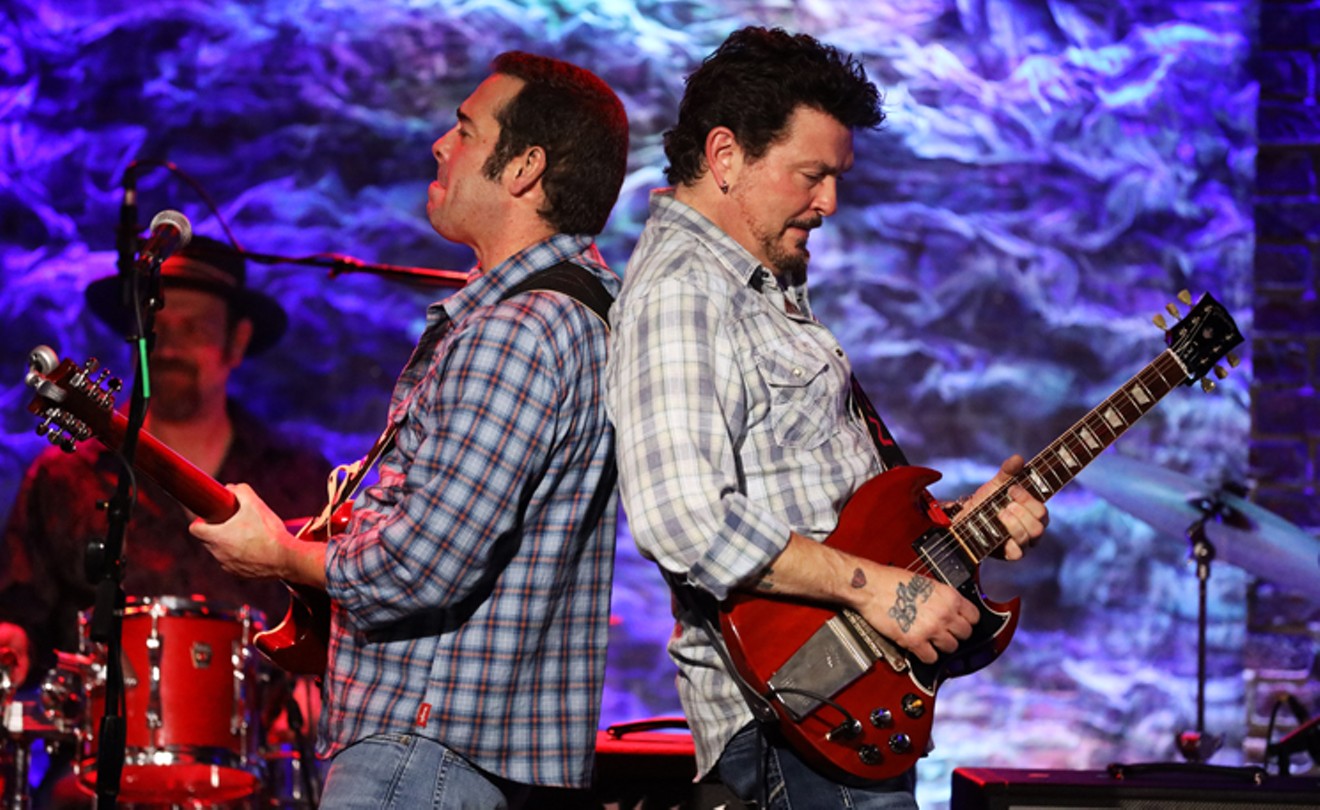 Albert Castiglia and Mike Zito a bluesmen and "Blood Brothers." Photo by Savas Mallotides/Provided by Mark Pucci Media
Once a necessity and staple of ‘70s rock and roll culture, the double live record has had less of a significance in the blues genre. That certainly didn’t stop singer/guitarist (and proud current resident of Nederland, Texas) Mike Zito from unleashing Blues for the Southside earlier this year on Gulf Coast Records, a label he co-owns.

Still, he may have missed a golden opportunity to call it Zito Comes Alive! and maybe rub off some of that Peter Frampton sales magic. 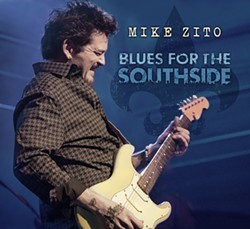 Record cover
“It could have been that, or we could have had Double Live Zito!” the man himself laughs from Dockside Recording Studio in Maurice, Louisiana.

“But my favorite albums are all live albums, from anybody. And my favorite one of all time is Lyle Lovett’s Live in Texas. There’s just a different energy with any band in that [setting] and in front of an audience. We’ve been playing a lot of these songs for a long time, and they have taken on a completely different thing over the years.”

“I don’t have hits, but these are fan favorites because everyone wants to hear them,” he says of tunes like “First Class Life,” “Hell on Me,” “Dying Day,” “Back Problems,” and “Makes Blues Not War.” “And I always end up playing more guitar live. People at shows will ask me what album sounds the most like what they just saw, so that’s another reason I did this.”

It’s also a return to a purer blues sound than the more rock-oriented direction of last year’s Resurrection, a previous tribute to Chuck Berry (though 2020 saw the release of Quarantine Blues).

But it’s a different Mike Zito show that will be coming to Houston at the Dosey Doe on May 25. The Blood Brothers tour will feature an opening set by Zito friend and label mate Albert Castiglia and his full band, followed by a middle set of Zito and his group, and then a third segment in which everyone assembles onstage for mostly covers from the Allman Brothers Band, Derek and the Dominoes, Neil Young and J.J. Cale. It’s their second jaunt with the format.
“Albert and I have been friends for about 15 years, then I started producing his records and we hit it off. I felt like people needed to take more notice of him, so we started doing stuff together,” Zito offers.

“And then when I started the label, he had to come over! He even came to the [management] agency with me. And when this COVID stuff got over, I said we needed to go on tour together. And we have a ball together!”

At first, it was going to be more of a traditional opening act/main act structure. But Zito started thinking of something that would be more collaborative.

“I didn’t want us to just play guitar together but have both bands out there as well. Make it a bigger thing. There’s just something a little bit extraordinary that happens when you have a lot of people onstage. And I didn’t just want to do a blues jam. On the [previous] tour, people just went nuts when we came out together,” he says.
And that will continue as the duo plan on entering the studio this fall (basically with Zito and his band, Castiglia, and the latter’s drummer) to record a new record of all-original tunes. Some of which may make an appearance on the Blood Brothers dates. The pair also plan on touring an all-Blood Brothers band show in 2023. And Zito breaks a bit of news to us.

“I haven’t really announced it yet and you’re welcome to use it in your article, but [world-famous bluesman] Joe Bonamassa and Josh Smith are going to come produce it, in September. So, we’re lining things up.”

But that’s with Zito’s performer’s hat on. As the co-founder and co-owner of Gulf Coast Records, there’s also business decisions and directives taking up his time. Mike Zito in concert.
Photo by Danya Artimisi
“You know, it’s really funny. I’m not some savvy, educated businessman, but it’s more now like it was when I was completely on my own and doing the records myself. When you’re on someone else’s label you want them to spend their money on you. Now I see the back-end side of that,” Zito says.

His goal with Gulf Coast, Zito says, is the same as those early days when it was just him: Make enough money on this record to be able to record the next one. And then try and sell a lot of them at gigs on tour. Some of Gulf Coast’s output are made in a “project studio” behind Zito’s house while others at different venues, sometime with Zito producing.

“Artists complain about how they don’t see any money from their labels. Well, you’re $50,000 in debt! You haven’t sold enough records yet,” he says.

“It’s like owning a store. You can’t give everything away. And even if you make just a dollar, you can’t lose money. That has not changed at all. I’m doing the same thing, but for 10 people. And an artist has to keep their budget tight and help promote themselves. It doesn’t take a lot of money to make a great record these days.”

And while Zito [like many blues artists] sell the majority of their records at gigs, he’s not so sure how many times they actually get played. “People do still buy CDs in this kind of roots music world, but many of them just want a souvenir of [the show] and something that can be autographed. They may not even have a CD player!” Zito laughs.

“But they want to support the artist. And they know that money from the sale goes directly to them,” he continues.

“Albert and I sold 500 CDs between us on the last Blood Brothers tour in 3 ½ weeks. And I don’t know that there’s any record store that sells 500 new CDs in a month for not a major artist. And according to the numbers, it’s still the bestselling physical format, not vinyl or downloads. But hey, you can’t go to a Rolling Stones concert and Mick Jagger comes out to [the merch table] and sign a record or take a picture!”

For more on Mike Zito, visit MikeZito.com
KEEP THE HOUSTON PRESS FREE... Since we started the Houston Press, it has been defined as the free, independent voice of Houston, and we'd like to keep it that way. With local media under siege, it's more important than ever for us to rally support behind funding our local journalism. You can help by participating in our "I Support" program, allowing us to keep offering readers access to our incisive coverage of local news, food and culture with no paywalls.
Make a one-time donation today for as little as $1.