Phil Lynott and Thin Lizzy Finally Get Their Documentary Due 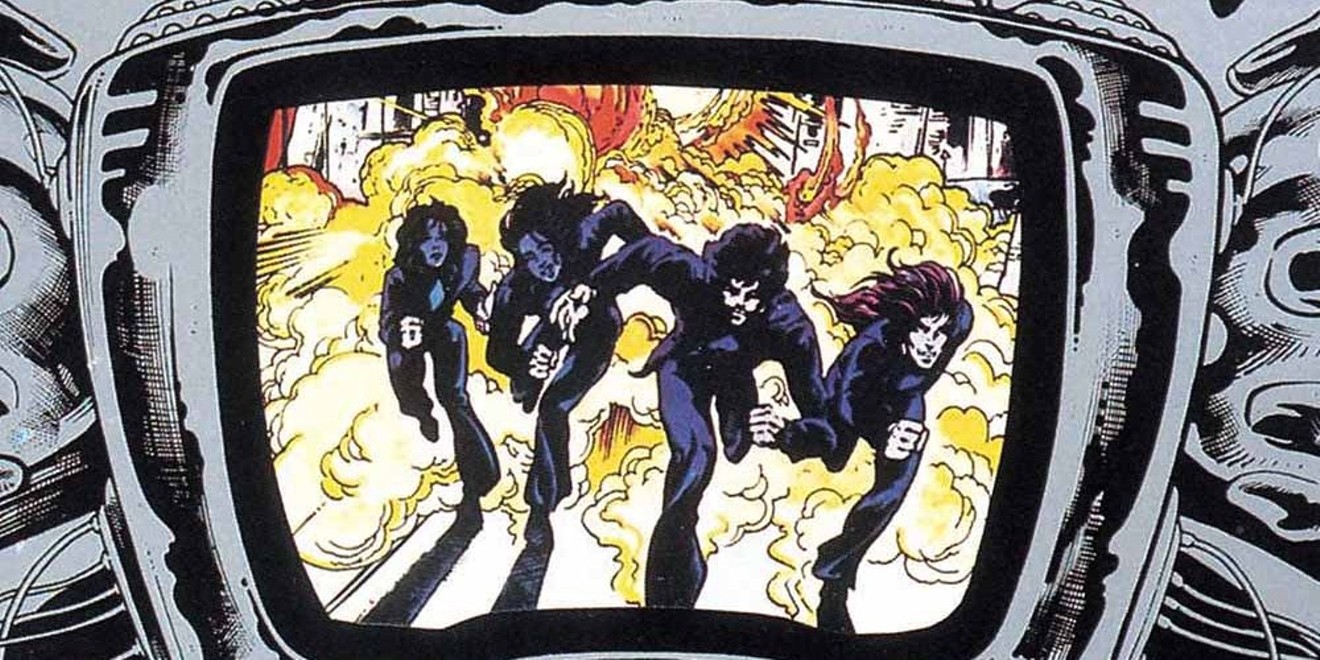 Thin Lizzy's classic lineup graphic doppelgangers on the "Jailbreak" cover: Brian Robertson, Brian Downey, Phil Lynott, and Scott Gorham. Record cover/Art by Jim Fitzpatrick
On many a Classic Rock fan’s shortlist of groups who have thus far been denied by the Rock and Roll Hall of Fame, Thin Lizzy is usually high on the ranking. And though mainstream U.S. audiences only know “The Boys Are Back in Town” or (perhaps) “Whiskey in the Jar” or FM staple “Jailbreak,” that’s a loss for us Yankees. 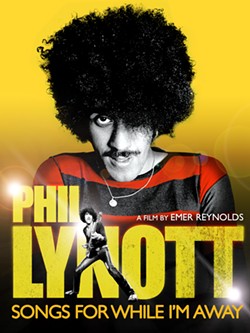 Band co-founder/singer/bassist and main songwriter Philip Lynott is also one of music’s most under appreciated geniuses. But his (and the band’s) story finally get their due in the amazing documentary Phil Lynott: Songs for While I’m Away (Mercury Studios).

Written and directed with substance and style by Emer Reynolds, it’s equally compelling for the Lizzy superfan as we as those who have only pumped their first and strutted with young swagger to “Boys.”

Lynott’s life—like many of his songs—are the stuff of movie plots. Born to a 17-year-old white Irish girl from a dalliance with an older Black man (who didn’t stick around for the birth) in the UK, Lynott was sent to be raised for the early part of his life by his grandparents in Dublin. His Black features not only made him stand out in the lily-white city, but they also made him a target of both wonder and ridicule.

But music gave him something of a way out, and he was playing and singing in bands by the time he was a teen. Lynott eventually formed Thin Lizzy (taking their name from Tin Lizzie, a female robot comic book character) with drummer Brian Downey and guitarist Eric Bell.

At first Lynott was a reluctant performer letting Bell take the spotlight, But a combination of seeing Noddy Holder of Slade capture and hold the attention of the audience and his own rising creative and personal confidence quickly turned him into a compelling front man.

He was bursting with song ideas as well. But it was their cover of “Whiskey in the Jar” that gave them the first success in Europe. The band were initially taking the piss out of the old Irish standard folk tune in rehearsal when manager Ted Carroll, sensing a hit, insisted they record and release it. It was the breakthrough they needed, but the tune became something of an albatross to Lynott as well.
When the rock and roll lifestyle got too much for Bell, he quit and was replaced with not one but two axe men: teenage prodigy Brian Robertson and American Scott Gorham. This is the classic lineup that would be one of hard rock’s greatest acts, and whose twin guitar sound became a sonic trademark (though Wishbone Ash got there first).

The doc features plenty of insightful interviews reflecting on Lynott’s music and life, including former band mates (Gorham and Bell, latter-day keyboardist Darren Wharton and guitarist Midge Ure); friends and relatives, an early girlfriend and his wife and daughters. Also, musicians Huey Lewis (who says he “wouldn’t be where he is” without Lynott), fellow Irishman and bassist Adam Clayton of U2 and Metallica’s James Hetfield, who covered “Whiskey in the Jar.”

“He was hot. He was on fire. You wanted to be near him. They were the best hard rock group I’ve ever seen,” a genuinely emotional Lewis recalls.
The doc also goes deep into the sheer breadth of Lynott’s lyrics and songwriting, which are often under appreciated. From the same man’s pen could come a loud stomper of sexual and lifestyle bravado (“The Rocker”), a cinematic extravaganza (“The Cowboy Song”), and commentary on his own racial world (“Half Caste,” “Black Boys on the Corner”), as well as nostalgic tributes to his beloved country and its history (“Dublin,” “Emerland”), and gentle ballads to family members by name (“Philomena,” “Sarah,” “Cathleen”).

Despite worldwide popularity and the U.S. chart success of “The Boys Are Back in Town,” Thin Lizzy just could never seem to get a foothold in the American market. It didn’t help that three major tours had to be cancelled due to Lynott’s contracting hepatitis just as “Boys” and the Jailbreak record were breaking, Robertson slashing his hand during a bar fight on the eve of one jaunt (known, but not covered in the doc), and replacement guitarist Gary Moore quitting halfway through another one.

In fact, the sort of six-stringer shuffle of players with wildly varying styles worked against a cohesive Lizzy sound. As more players came and went, so did some of the fire (though the band’s last record, Thunder and Lightning ensures they went out on a strong note).
Director Reynolds does a careful and artistic job of blending audio recordings, concert and video footage, still photos, contemporary interviews, recreations, and artsy images together in telling the story.
The absence of any interviews from Downey and Robertson leave a curious, sizable hole, as does (save for a couple of voiceovers) any footage of Lynott’s mother Philomena. She was a fierce champion for her son and his legacy until her death in 2019 at the age of 88.

Reynolds also choose to end the doc with Lynott’s death, perhaps missing an opportunity to accentuate the band’s legacy and impact in later decades, as well as the “Songs for Philo” tribute shows. And the statue of Lynott in on Harry Street in Dublin is shown, but not explained. But these are admittedly Lizzy superfan nitpicks.

“There’s no point in having a fast car and not driving it fast,” Lynott’s own voice says in an old interview tape. And it’s certainly a philosophy that he lived by—even if he didn’t know when to put on the brakes. His final years were marked by significant drug and alcohol use, as well as depression. Though in typical Phil fashion, he also used it as fodder for his songwriting (“Got to Give It Up,” “Sugar Blues,” “The Sun Goes Down”).
In the end he broke up Thin Lizzy. And estranged from his family and adrift musically, Lynott died of septicemia and pneumonia (exacerbated by his substance abuse) in 1986 at the age of 36.

In the song “Somebody’s Else’s Dream,” Lynott’s lyrics could not be more telling about his own struggles to fulfill the many roles his life: “Who do you think you are/Are you a poet, a lover, a father, a rock and roll star/Who do I think I am/I love my partner in life, my wife, and children/Who do you think you are/Well, I’m messed up, I fucked up, I should shut up.”

But—as one interviewee states at the end—though Philip Lynott’s life was short, the music that he and his band mates in Thin Lizzy created will (and does) last far longer. They’ve appeared on the Rock Hall ballot once, and fans can only hope this doc might help push them toward that glass pyramid in Cleveland. Hell, it worked for the Go-Go’s.

Phil Lynott: Song For While I’m Away is available on digital streaming platforms.
KEEP THE HOUSTON PRESS FREE... Since we started the Houston Press, it has been defined as the free, independent voice of Houston, and we'd like to keep it that way. With local media under siege, it's more important than ever for us to rally support behind funding our local journalism. You can help by participating in our "I Support" program, allowing us to keep offering readers access to our incisive coverage of local news, food and culture with no paywalls.
Make a one-time donation today for as little as $1.