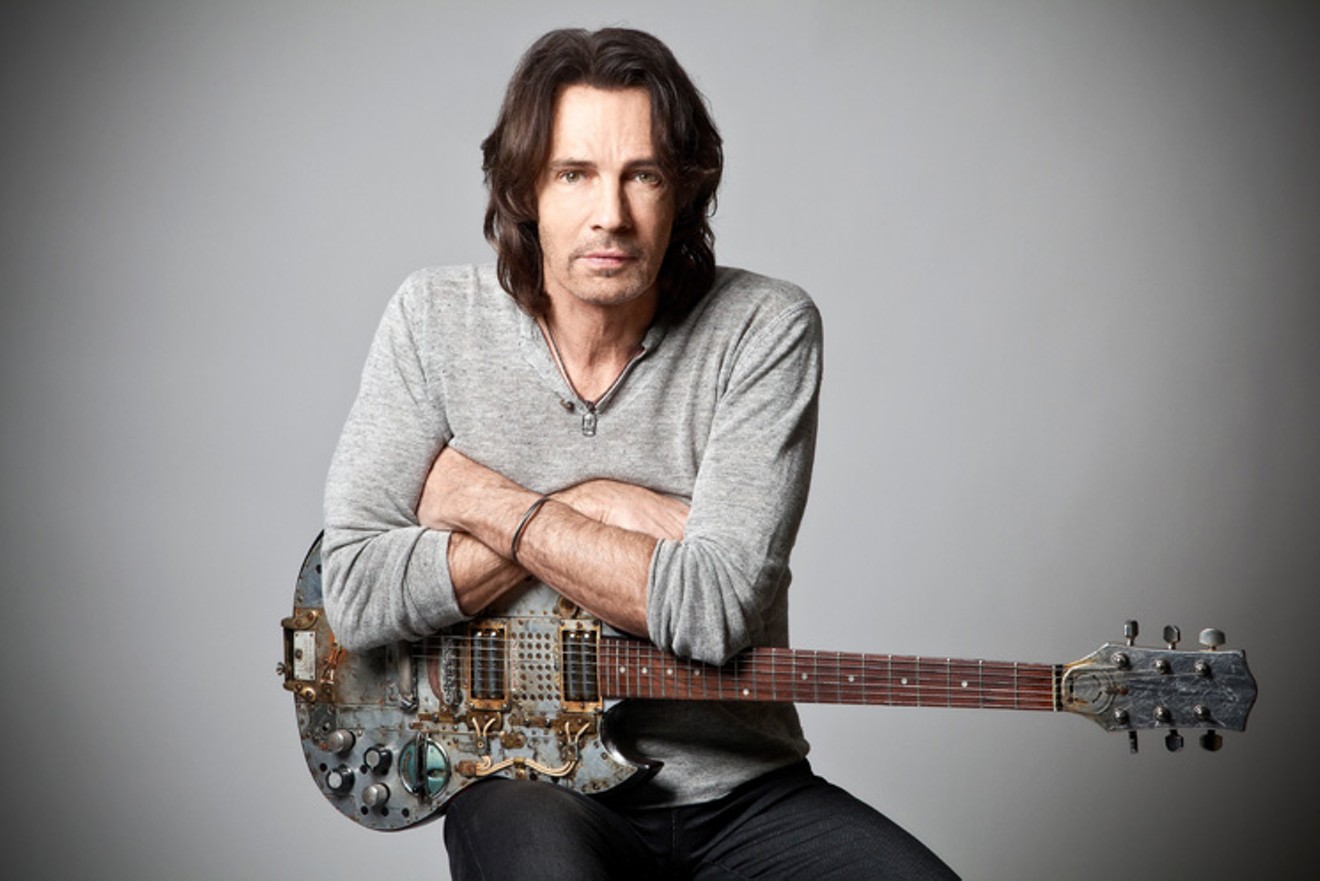 Rick Springfield brings back the past, while also moving to the future. Photo by Jay Gilbert
It’s a myth-busting notion that, outside of the 90 minutes or so they’re onstage performing, the reality of a successful touring rock musician is often blur of airports and airplanes, car rides, hotels and room service menus, and sound checks. Rick Springfield onstage.
Photo by Jay Gilbert
And sometimes, interviews. As when Rick Springfield calls from his hotel room in Raleigh, North Carolina. It’s to chat in between packing his suitcase and then heading out to the airport to catch a flight to the next date of a summer tour he’s headlining with hitmaking era contemporaries Men at Work and John Waite. The package stops in Sugar Land at the Smart Financial Centre on August 14.

“The package thing seems to be the future of touring because it’s hard to get out to see a show now. It’s not like when you were 16 or 17 and could just take off,” Springfield says. “Now, you’ve got to hire a babysitter, and there’s dinner, and exorbitantly-priced T-shirts. And then the tickets! It’s a big deal, so I wanted to do a worthwhile show for people to come out to.”

Springfield says that between the three acts, the audience can expect an evening of “wall to wall hits.” And indeed, Rick Springfield has more in his sonic arsenal than some may immediately recall: “I’ve Done Everything for You,” “Don’t Talk to Strangers,” “I Get Excited,” “Affair of the Heart,” “Human Touch,” “Love Somebody,” “What Kind of Fool Am I,” and “Love is Alright Tonite.”

First among them, of course, is the No. 1 hit “Jessie’s Girl” which—note for trivia buffs—was originally titled “Randy’s Girl” until Springfield changed it to a moniker that would flow more easily off his tongue.

But though its upbeat tempo pegs it as a joyous dance track in the ‘80s memory bank, when looked at with just a lyric sheet, it’s about desperation, yearning, and a lust hot enough to bust up a deep friendship. And it’s based on a true part of Springfield’s life.
“It’s a very dark song, because I didn’t get what I wanted,” he says. “Most of my songs come from dark places. ‘Don’t Talk to Strangers’ is about sexual paranoia. When you’re not feeling great, you look inward. And that’s where the inspiration for great songs come from.”

The current tour also serves as an unofficial (with a COVID-related mathematical allowance) 40th anniversary celebration of Springfield’s breakthough album, 1981’s Working Class Dog, which appeared full decade after his initial solo release. Springfield and his current band recently recorded and released a new live version of the album from front to back. He also tinkered with his catalog in 2019’s rock-meets-classical Orchestrating My Life.

“I like the original versions, and I’m not big for making new ones from what people are familiar with. I originally wrote these songs just to play them live at L.A. clubs because I didn’t have a record deal at the time,” he offers. “They’re short songs with strong hooks, and I have a killer band now today that nailed it.”
The entire project was recorded with no overdubs not on a soundstage or in a recording studio, but in Springfield’s own living room with the players and singers arranged in a semi-circle around his rugs, furniture and knick-knacks.

“I wanted to do something different that fans might find interesting. Kind of take a look around my house!” he laughs. 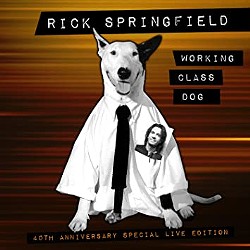 Record cover
“It was sort of at the end of the first wave of COVID and we hadn’t seen each other in about a year and a half. And I realized that those songs on that record were very punk-infused. I was listening to a lot of Elvis Costello and the Police at the time. That was forgotten during the whole hype of the time of being a pop guy.”

Springfield says that his band is “very much family” and Barbara, his wife since 1984, even cooked for everyone. “It was a really great party!” he recalls.

But as he detailed in 2010’s Late Late at Night, his extremely raw and honest autobiography, things haven’t always been so happy with him. In it, Springfield writes extensively about his lifelong depression, fear of failure and sexual addictions—often extramarital. He even invents a third-person character of “Mr. D” to characterize himself at his lowest.

It's an issue that he says he struggles with to this day, emotionally breaking down and in tears about it without any reservations as recently as in a 2020 TV interview with Australian journalist Craig Bennett. It’s where he also revealed that he tried to pull the plug on the whole thing just before it was set to be published.

“I wrote it without a ghostwriter, and it was to fun to revisit a lot of it—even a lot of the dark places—from a safer place. But once I sent it off, I thought about all the repercussions from my wife, all the sex stuff,” he says.
“But she had friends read it and they told her it was basically a love letter to her, even with all my faults. But no one focused on the sex, they focused on the depression! And that is the real story behind the success story. I didn’t realize it at the time.”

Springfield adds that his friend and fellow hitmaking musician Richard Marx (they sometimes play together as “The Two Dicks”) called him up after it came out and told him “You’re either insane or the fucking greatest guy I’ve ever known.” 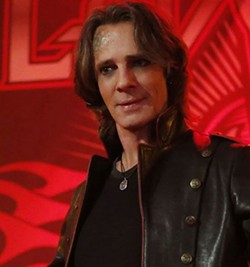 Springfield as "Lucifer" on TV's "Supernatural."
Screen grab
Rick Springfield also has an entirely other career as an actor, with credits ranging way back in the day on  TV shows like The Hardy Boys/Nancy Drew Mysteries, Wonder Woman and The Six Million Dollar Man. That, along with an involvement with a children’s cartoon and some of his earlier recordings, made him a burgeoning teen idol.

“I was kind of taken by surprise by the whole teen thing. We didn’t have teen magazines in Australia, so when I came over here, I was doing interviews with what I thought were music magazines,” he says. “It turned out that was the least part of the stories, and instead there would be headlines like ‘Is Rick Too Tall for Love?’

Springfield says he couldn’t even go to Disneyland because he’d get recognized by all the kids. Eventually, a woman friend told him that career route was a “dead end.” He fired his management team, laid low, and woodshedded on what would become Working Class Dog.

He starred in the very loosely-autobiographical 1984 film Hard to Hold but is still most widely known as Dr. Noah Drake on the soap opera General Hospital over several stints, some decades apart.

His more current thespian activities include parts on TV in Supernatural and American Horror Story, and films like Ricki and the Flash (in which he played a member of Meryl Streep’s title character’s band and taught the actress some musician tips.

He says that he hopes to focus more on this part of his career after the tour is over. But then he’s also got a new studio album already in the can and ready to come out. He also currently hosts a weekly show on SiriusXM Radio, “Working Class DJ.”
The Father Time-defying 72-year-old Springfield also has one more venture up his sleeve. Or rather, in a glass in his hand. He’s partnered with rocker Sammy Hagar (who wrote his hit “I’ve Done Everything for You”) in Beach Bar Rum. Hagar was an early pioneer in this area, having massive success with his Cabo Wabo and Santo Fino Tequilas, along with the Beach Bar brand.

“I’ve known him for a long time and was looking to get in the alcohol business. And I love rum. He called and said instead of being a competitor, why didn’t I come on board?” Springfield recalls. “He comes off as party and rock and roll, but he’s actually a great and very smart entrepreneur.”

For more on Rick Springfield, visit RickSpringfield.com.
KEEP THE HOUSTON PRESS FREE... Since we started the Houston Press, it has been defined as the free, independent voice of Houston, and we'd like to keep it that way. With local media under siege, it's more important than ever for us to rally support behind funding our local journalism. You can help by participating in our "I Support" program, allowing us to keep offering readers access to our incisive coverage of local news, food and culture with no paywalls.
Make a one-time donation today for as little as $1.